Author Bryan Dearsley visited many small churches on a multi-week trip through England in the summer of 2022.

From quaint village affairs to tiny places of worship tucked away down quiet alleyways in its bigger cities, England boasts some of the most charming small churches found anywhere in the world.

Centuries old, some even bear the scars of war, while others were built on ancient sites of even older Roman-era structures. Many are located extremely close to major English tourist attractions, such as castles, cathedrals, and interesting small towns, making them easy to visit for travelers focused on seeing better-known points of interest.

Take the time to be curious, and you'll be rewarded with superb photo opportunities and the immense satisfaction of discovering hidden gems that reveal fascinating tales of old that you'd otherwise have missed.

While most old churches in England are free to enter, donations are always welcome to assist with their upkeep.

Discover fascinating stories, from connections to England's literary greats to the settings for historic events, at the most interesting small churches in England.

1. London's Oldest Church: All Hallows by the Tower

Located just steps away from England's most visited tourist attraction, the Tower of London, All Hallows-by-the-Tower has the distinction of being the oldest church in the City of London. Dating back to 675 BCE, the church boasts evidence of everything from London's original Roman settlement to Saxon times through to the London Blitz of WW2.

Saved during the Great Fire of London in 1666 by Admiral Penn, the church tower served as a lookout from which he and his friend Samuel Pepys observed the events of that devastating fire. The church is also famous as being the location where the Admiral's son, Pennsylvania founder William Penn, was baptised 22 years earlier.

This remarkable church is also home to a variety of other interesting artifacts worth seeing. These include an intricately carved font cover by Grinley Gibbons, made in 1682; a wooden crucifix made from the Spanish Armada flagship; and, in the crypt, an altar made from stones gathered from Palestine during the Crusades.

2. The Cambridge Round Church

Built in 1131, Cambridge's famous Round Church is located in the heart of this attractive university town and is close to Cambridge's most popular attractions. Officially known as the Church of the Holy Sepulchre, it's something of a rarity, as only three other churches built in this style during the Norman-era still survive.

An informative visitor center offers a fascinating look into the church's history, as well as fun walking tours that include tales relating to this unique building and its surrounds.

Perched atop a section of Winchester's medieval city walls, St. Swithun-upon-Kingsgate is extremely easy to miss. Built in the 1100s on top of Kingsgate, a medieval entrance into the city, this tiny church once served as a chapel to the cathedral's priory, and at one stage was even home to the gatekeeper and his pigs.

Refurbished in the 1300s and again in the late 1600s, this remarkably well-preserved little church even appeared in author Anthony Trollope's novel, The Warden. The church is still entered, as Trollope describes, through a narrow flight of stone steps located under the gate's archway.

It's also notable as being a favorite place of worship for former Archbishop of Canterbury, Lord Donald Coggan, whose funeral took place here in the year 2000. Surely one of the humblest heads of the Church of England, he was often seen playing the piano here during regular Sunday services.

A visit to the church can easily be combined with other centrally located attractions in Winchester such as the cathedral, the city's historic college, and its old bishop's palace.

Just steps away from the hilltop fortress that is Scarborough Castle, St. Mary's With Holy Apostles dates back to the mid-12th century and is one of Scarborough's most popular tourist attractions.

It's also the site of some of the most intense fighting of the English Civil War, when Parliamentarians under Oliver Cromwell used the church as a base from which to bombard the Royalists holed up in the castle.

The destruction was immense, with the ruins of the north aisle and choir now a part of the grounds. Be sure to pop into the surviving main section of the church where volunteers also run a charming tea (or coffee) and cake service (homemade!).

The church graveyard is also worthy of mention. Here, you'll find the gravesite of author Charlotte Bronte's sister, Anne, buried here in 1849 at age 29. The views over Scarborough and the coast from the church grounds and graveyard are spectacular.

St. Michael The Archangel Church in Lyme Regis, Dorset, is another historic church in England boasting a spectacular seaside setting. Perched high above the Jurassic Coast, a magnificent 95-mile-long section of England's southern coast that stretches all the way to the county of Devon, the church offers views that are simply breathtaking.

Numerous park benches have been added to the church grounds to encourage visitors to relax and soak in the vistas over the English Channel.

You'll also want to seek out the tombstone of the graveyard's most famous "resident," Mary Anning, the country's first fossil-hunter, who died in Lyme Regis in 1847.

If you're planning on touring the city of York, be sure to spend at least a little time exploring the surrounding area. Some of the best places to visit in North Yorkshire are an easy car ride from this historic city, including some of the prettiest villages in England.

One of our favorites, Bolton Percy, also just so happens to be home to one of the most attractive village churches in England: All Saints' Church, constructed in the 1400s. Pop in, and you'll see graffiti dating from the English Civil War along with fine examples of stained-glass windows.

Explore the grounds, and you'll be rewarded with charming vistas, including an old timber-framed home, as well as a charming cemetery garden located just across the road.

Although completely destroyed during an air raid in WW2, Holyrood Church is a must-visit for anyone planning a visit to the Hampshire city of Southampton.

Constructed in the early 1300s, the church ruins have been preserved as a sailor's memorial. In addition to commemorating crews lost in the two world wars and other conflicts, there's also an important memorial to the crew of the ill-fated Titanic, which sailed from Southampton.

The church tower, complete with its still-functioning clock, survived the bombing and, along with the memorials, makes for a poignant reminder of the tragic endings faced by so many who served in the British navy.

While no longer a functioning port due to the coastline having receded centuries ago, the old town of Rye in East Sussex was once home to one of the country's busiest medieval harbors. Wander its old cobbled streets up to the Parish Church of St. Mary's, and you'll easily find yourself transported to a time when the town would have been bustling with traders and ships' crew members.

Built in the mid-12th century, the church is as impressive inside as it is on the outside. In addition to seeing its elaborately carved stonework and stained-glass windows, you'll want to make the climb up St. Mary's Tower for the stunning views over Old Town Rye. Also of note is the old water tank, Rye Water House, located within the churchyard.

One of the more unusual churches in England, St. James Chapel in Warwick sits atop the city's West Gate. Once part of historic, medieval Lord Leycester Hospital, it was built in the 12th century to serve as the chapel for the neighboring old soldier's home. It's certainly an imposing sight and is extremely photo worthy.

As well as exploring its interior, be sure to take a stroll under the church as you pass through this old entranceway into Warwick Old Town. You'll enjoy seeing the medieval-era candleholder suspended from a sculpture of a crown.

Located on the north shore of the county of Kent, St. Mary's Church in Reculver is well worth a visit. Though mostly in ruins, the shell of this once impressive church certainly provides a sense of its former scale and importance.

Dating back all the way to the 7th century, this once prosperous church fell into disrepair in the 1700s after the community of Reculver fell into decline. It's certainly a dramatic setting, overlooking the coastline and the Thames Estuary.

You'll also want to visit the neighboring ruins of what was once one of the most important Roman encampments in England.

Located near the coastal resort town of Eastbourne in East Sussex, the pretty village of East Dean is home to the charming Church of St. Simon and St. Jude. This picture-perfect country church dates from the 11th century, when its north tower was built, with further additions added in each of the 12th and 13th centuries.

Be sure to also explore the village of East Dean itself. Stepping out of the church and onto the village green is a little like stepping back in time, with the absence of traffic and the presence of picnickers enhancing the feeling of tranquility.

As you explore London's Covent Garden area near always bustling Trafalgar Square, keep an eye out for St. Paul's Church.

Famously described by Inigo Jones as "the handsomest barn in England," the Actor's Church, as it's also known, is a little deceptive. Walk through the gardens to the side of this 17th-century church, and you'll see that the Covent-Garden-facing side is actually the church's rather plain neoclassical rear. It's an easy mistake to make, and the red brick façade of the front of the building is altogether more attractive.

After you've explored its interior, spend a little time exploring the grounds for a peek at the gravestones of the many once-famous actors buried here.

While most visitors to the seaside resort town of Bournemouth are here for its magnificent beaches, there's certainly plenty to see when you're done with the sun. Included on our list of the top things to do in Bournemouth is paying a visit to St. Peter's Church.

Although one of the newer destinations on this list of the best historic churches in England to visit (it was built in 1879), it certainly has a story to tell. Head up the hill to the rear of the church, and you'll soon find yourself facing the burial site of members of the Shelley family. Most noticeable among the Shelleys buried here is Mary, author of the famous gothic horror novel, Frankenstein.

The Church of St Lawrence is another hidden gem in Winchester that's easy to miss. Tucked away down a narrow alleyway off the Winchester High Street, the rather plain exterior of this small church betrays its interesting interior.

Dating back to before the Norman conquest of 1066, the current structure was built in the 12th century and is well worth including on your Winchester travel itinerary. Highlights include a relatively recent engraved glass screen over its porch, a rare 19th-century organ, its stained-glass windows, and its exposed rafter. 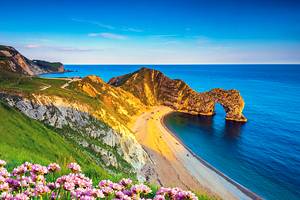 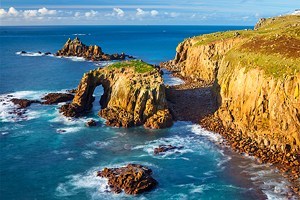 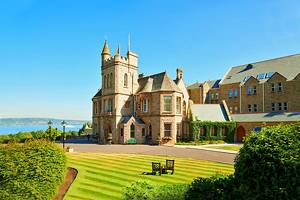 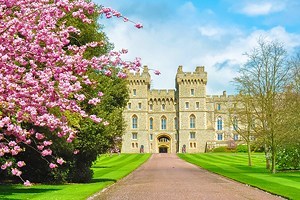 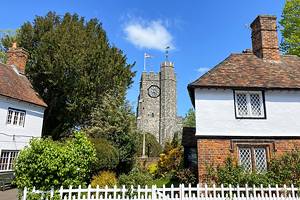 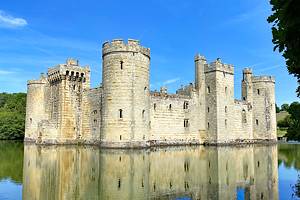