Originally a fishing village and later developed into a large Victorian beach resort, Eastbourne is one of the most popular places to visit in England for those seeking a seaside getaway. Its elegant three-mile-long seafront promenade extends along wide pebble beaches, and a marvelous holiday atmosphere permeates the spectacular mid-19th-century Grande Parade.

This is the perfect place for a stroll past magnificent white- and pastel-hued houses and luxury hotels (including the famous Grand Hotel) overlooking brightly colored deckchairs on the beach. At the end of the wide esplanade, Eastbourne Pier projects far out to sea behind the Winter Garden theater.

The traffic-free areas around the High Street offer a colorful array of shops and art galleries, as well as plenty of entertainment at locations, such as the historic Royal Hippodrome Theatre.

Eastbourne also boasts several fine parks and leisure facilities, and sports enthusiasts are well catered to with numerous golf courses and tennis courts (the Eastbourne International ladies' tennis tournament is held here each June). Hikers will want to take on the South Downs Way, a magnificent 100-mile trail that begins in Eastbourne and extends all the way to Winchester.

Be sure to use our list of the top-rated tourist attractions in Eastbourne to plan your seaside vacation.

Within walking distance of downtown Eastbourne, the 530-foot-high Beachy Head is a favorite sightseeing spot for tourists due to its spectacular views. This striking snow-white cliff at the end of the South Downs amply justifies its fame, taking its name from the French Normans who called it "Beauchef" (beautiful headland).

After soaking up the views, take the three-mile-long cliff path passing through Cuckmere Haven and Seaford, or try one of the Guided Walks hosted by the Downland Rangers. Be sure to visit the Beachy Head Countryside Centre, with its interesting Downland Experience exhibit featuring the archaeology, flora, and fauna of the area.

Accommodation: Where to Stay in Eastbourne

The famous Carpet Gardens are the centerpiece of Eastbourne's Promenade and should definitely be explored. With vibrant displays of bedding plants and fountains, these award-winning gardens are a welcome splash of color between the Western Lawns and Eastbourne Pier. Shrubs and plant species from around the world, including from Mexico, New Zealand, and the Mediterranean, thrive in the town's mild climate.

Another gardener's delight, tucked away below Helen Gardens at Holywell, is the lovely old Italian Gardens. Located in a wooded amphitheater carved out of the cliffs, the gardens were constructed in 1904 and provide the perfect setting for open-air theater productions.

Eastbourne's most popular beaches are located between the pier and the Wish Tower, a Martello Tower built in the late 18th century to keep Napoleon out. Known as the Marine Parade Beaches, they're the area's cleanest swimming areas and offer amenities including lifeguards, safe bathing zones, showers, and toilets, as well as refreshment facilities and bathing cabins.

Another beach area to check out is Holywell Retreat. Situated at the foot of the South Downs, this quaint enclave boasts a popular café, beach huts, and beach chalets.

Built in 1870, Eastbourne Pier is a wonderful example of Victorian seaside architecture. A highlight of a visit is enjoying the superb views of the town and the English Channel, as well as enjoying the many fun things to do here. The structure's boardwalk leads to a number of tourist attractions, including dining opportunities (check out the Victorian Tea Rooms), an amusement arcade, and novelty and souvenir shops.

Also popular with tourists is the original Camera Obscura, a Victorian projector with a 360-degree view of the seafront. Although severely damaged by a fire in 2014, much of the pier and its attractions remain open, including its restaurants (and yes, there's a chip shop!).

A little farther along Grand Parade is the Eastbourne Lifeboat Museum. Housed in a 19th-century boathouse, it features interesting displays and exhibits related to the town's lifeboats and maritime history.

The 200-year-old Eastbourne Redoubt was part of a chain of fortifications designed to deter Napoleon's forces in the early 1800s. Garrisoned by troops until the early 1900s – and again during WWII – the fortress houses three excellent military collections, including artifacts and displays related to the Royal Sussex, the county's regiment for more than 250 years.

Visitors can view artifacts from the 1702 Spanish War of Succession right up to the North Africa campaign of 1942. The Queen's Royal Irish Hussars collection celebrates the history of two famous cavalry regiments: the 4th Queen's Own Hussars and the 8th King's Royal Irish Hussars, famous for their part in the ill-fated Charge of the Light Brigade.

On-site amenities include a cinema and a café. Guided tours are available,

Model train enthusiasts (and kids of all ages) won't want to miss the Eastbourne Miniature Steam Railway Adventure Park. This mile-long ride through five acres of quaint gardens and parkland aboard fantastically detailed 1/8th-scale miniature trains has been one of the most fun things to do in Eastbourne for families for years.

In addition to the nine different engines to look for while trainspotting, there's also a nature walk, an adventure playground, model railways, a café, and a gift shop. Fishing can also be enjoyed on Southbourne Lake.

7. Seaford and the Seven Sisters

Just nine miles from Eastbourne, the seaside town of Seaford is famous for its Martello Tower at the eastern end of the promenade. However, what it's most famous for are the superb views of the Seven Sisters Country Park. A number of walking trails can be enjoyed, including one that provides easy access to the beach at the foot of the cliffs.

Among England's most impressive cliff views, the incredible Seven Sisters – Haven Brow, Short Brow, Rough Brow, Brass Point, Flagstaff Point, Bailey's Brow, and Went Hill Brow – are just begging to be explored. The best view of these seven chalk hills, which form part of the foothills of the South Downs, can be enjoyed from Seaford Head.

Founded in 1923 and located in its current modern facility since 2009, the Towner Gallery boasts an impressive collection of more than 4,000 oil paintings, watercolors, sculptures, and sketches. The gallery features numerous examples relating to Sussex artists with a special connection to the country, including traditional and modern art works.

Numerous "big name" artists also appear in this surprisingly eclectic collection. These include the likes of Henry Moore; Pablo Picasso; and Eric Ravilious, a student then later teacher at the Eastbourne School of Art. Tours and educational programs are available.

Set on a moated island near Hailsham, eight miles north of Eastbourne, Michelham Priory is considered one of the most impressive historic houses in Sussex. Built in 1229, most of the original buildings were destroyed during the Dissolution and the remains converted into a Tudor farm and country house.

Interior highlights include the mansion's Victorian and Tudor kitchens, along with a room modeled to look as it would have done in WWII, when evacuees from London were housed here.

Other big draws today include picturesque grounds and gardens, a working watermill, a sculpture garden, a smithy, and a rope museum. Be sure to look for the Elizabethan Great Barn, which serves as a backdrop for art exhibits and theater productions. A café and shop are located on the property.

For those seeking a different kind of thrill when in Hailsham, nearby Arlington Stadium features a quarter-mile-long raceway for hot rod and stock car racing.

This nationally acclaimed 14-mile trail follows the route of the former "Cuckoo Line" railroad linking the towns of Polegate, Hailsham, Horam, and Heathfield. The level and surfaced trail offers ideal opportunities for walking for those of all abilities.

It's also popular for cycling (it's part of the National Cycle Network) and horseback riding. Mostly traffic-free, the route offers superb opportunities to explore the region's beautiful countryside. Part of the trail even passes through a former train tunnel, the Heathfield Tunnel.

The Observatory Science Centre in Herstmonceux features an incredible historic astronomy site that was once part of the Royal Observatory in Greenwich. Highlights of a visit include fun exhibits, with an emphasis on discovery and sharing the miracles of science, as well as many unique displays relating to the history of the building itself. Tours and occasional open evenings are available after hours that allow guests a chance to view the night sky.

No visit would be complete without spending time exploring neighboring Herstmonceux Castle, one of the oldest brick buildings in England. Surrounded by a large moat, this impressive 15th-century mansion offers tours of its interior, as well as the chance to explore its extensive gardens and grounds, including some 300 acres of woodland. 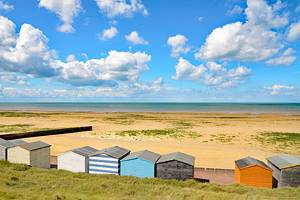 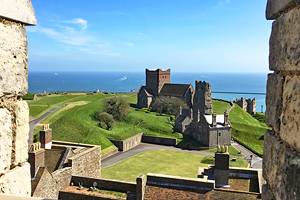 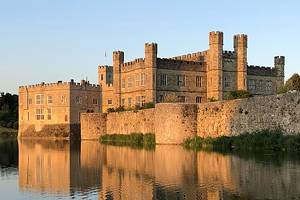 12 Top-Rated Attractions & Things to Do in Dover
Recent Articles