Famous for its spectacular chalk cliffs, the White Cliffs, Dover is one of Britain's principal cross-channel ports. Yet despite the opening of the Channel Tunnel to Calais, many visitors to the country still choose to arrive by ferry for the magnificent views of Kent's lovely coastline, and a stopover in Dover is certainly a worthwhile option to consider.

Although many travelers pass through Dover on the way elsewhere, plenty of points of interest make this historic town well worth a visit. One of the most popular things to do while wandering the town center is visit the old town hall, Maison Dieu Hall, built in 1203 by Hubert de Burgh as a hostel for pilgrims.

Like so much of England, Dover was heavily influenced by its Roman heritage, and you can explore a number of Roman-era attractions here. These include the remarkable lighthouse on Castle Hill and the Roman Painted House.

For centuries after the Romans left until WWII (when the town suffered severe damage due to its role as a naval base), Dover was a bulwark against attacks from Europe. Today, you can learn about this period in the numerous museums and historic sites in and around the town.

For more ideas on the best places to visit, see our list of the top attractions and things to do in Dover.

See also: Where to Stay in Dover

The steep chalk cliffs of Dover, for centuries a proud symbol of the "splendid isolation" of England and also the first sign of home for returning sailors, are crowned to the east by the mighty castle. The western cliffs bear Shakespeare's name, as King Lear ended here, and the much-used quotation invoked by the sight of the cliffs, "This precious stone set in the silver sea," comes from Richard II.

The National Trust's Gateway to the White Cliffs Visitor Centre is the best place to begin sightseeing in the area and includes displays, interpretive signs about the area, as well as programs about its flora and fauna. It also offers superb views of five beautiful miles of coast and countryside, as well as of the maritime traffic on the world's busiest shipping lane.

From the center, it's also possible to explore Fan Bay Deep Shelter, a remarkable network of tunnels built during WWII under the artillery battery above.

Thanks to its stunning views over the English Channel, the White Cliffs are also extremely popular among hikers and cyclists, with numerous well-marked trails linking the area's main attractions (there's even an annual Walking Festival, as well as hiking programs for kids).

Perched high above the English Channel, Dover Castle was started in 1168 by Henry II on the site of ramparts that were already some 1,000 years old. The central Norman keep, built in 1180, houses most of the castle's exhibits, including the Great Tower with its richly furnished chambers. Costumed guides, medieval feasts in the banqueting hall, and military re-enactments are all part of the fun.

Also of interest are the ruins of the Roman Lighthouse and the church of St. Mary in Castro next to Colton's Gate, built from Roman bricks by the Saxons in the year 1000 and incorporated into the castle complex.

Other on-site attractions include the superb Wartime Tunnels Uncovered. Built during Napoleonic times to provide protection from enemy fire, the tunnels under Dover Castle are open to the public and contain exhibits tracing their history. More recently, in WWII they served as HQ for the evacuation of British and French forces from Dunkirk.

Another tunnel area to explore is the Underground Hospital, a reconstruction of the wartime surgery that served the many troops stationed in the area.

The beautiful Victorian lighthouse perched atop the White Cliffs of Dover was built in 1843 and has the distinction of being used by Marconi for the world's first successful attempts at radio navigation. Built to warn mariners of the shifting Goodwin Sands while guiding them through the Straits of Dover, it's also famous as the first lighthouse in the world to display an electric light.

The views of the English Channel are wonderful, and on a clear day, you can see all the way to France. Inside, interpretive displays showcase the work involved to keep the lighthouse running, including maintaining the unique mechanism that made the lighthouse flash (there's also an excellent on-site tearoom).

Wondering where all that chalk dug up during construction of the Channel Tunnel went? Well, wonder no more. Samphire Hoe is a 74-acre nature reserve at the foot of famous Shakespeare Cliff mid-way between Dover and Folkestone that was constructed using the many tons of dirt excavated during the building of the tunnel.

It's now one of the best places from which to truly appreciate the drama of the magnificent White Cliffs as they tower above you. Samphire Hoe is also popular for its bird-watching and sea angling.

This must-see attraction is easy to access, and features pleasant, easy-to-walk trails and viewpoints. A tea kiosk and education center are located on-site.

Started in 1779, when the fear of French invasion was high across England, Dover's Western Heights grew to become one of the island nation's largest network of fortifications.

Consisting of numerous ditches and forts stretching along the coast from Dover Castle, it features a number of important strong points that can still be seen today. These include the massive Drop Redoubt and the Citadel, as well as the dry moats that joined them. Guided tours of the redoubt are available.

The most impressive feature here, however, is undoubtedly the Grand Shaft. Consisting of a unique 140-foot triple staircase literally cut into the cliffs, this amazing structure served as a shortcut for troops stationed on the Western Heights to the town, should they be required to defend the latter. If possible, try to time your visit for the third Sunday of each month from April through November, when the shaft is open to the public.

The Roman Painted House was built around AD 200 and formed part of a large mansion used as a hotel by travelers venturing across the English Channel. It's the finest surviving Roman Period House in England, with some 50 structures uncovered to date, including a number of unique painted walls.

All told, some 400 square feet of frescoes have survived the centuries, along with an elaborate under-floor heating system. Also on display are a variety of interesting artifacts from Roman Dover, which at the time was known as "Dubris." A garden area is available for visitors to use as a picnic spot.

Located in the family visitor center in Market Square, the Dover Museum houses three floors of objects and displays recounting the town's rich history, from its Roman beginnings to the modern day.

It's also home to the world's oldest known seagoing vessel, a Bronze Age wooden boat. Thought to be about 3,000 years old, the vessel is the focus of an excellent exhibit relating to that period of Dover's history.

Other highlights include an impressive collection of Saxon-era artifacts and jewelry, as well as numerous scale models depicting the town at various key points in its history such as the shelling of the town during WWII from occupied France.

Erected in Northfall Meadow, a small woods to the northeast of Dover Castle, stands a memorial to French aviator Louis Blériot. Blériot was the first person to fly across the English Channel in 1909 in a "heavier than air" aircraft (more than 100 years after an air balloon had made the trip).

The granite memorial itself is quite unique as it was built in the shape of Blériot's plane, which can still be seen in Paris at the Museé des Arts Métiers. A sister memorial marker has been erected in Calais where the pilot's adventure began.

Other fun things to do here include exploring the grass labyrinth and organic kitchen garden, which boasts more than 40 different species of organic fruit and vegetables. There's also a very popular tearoom on-site, along with the award-winning Pines Calyx, a conference center built into the hill using centuries-old construction techniques.

Directly opposite the main entrance to Pines Garden is St. Margaret's Museum. This interesting museum features a good selection of WWII-related artifacts. Of particular note is Hellfire Corner. Named after the brutal air battles that took place over this section of Kentish coastline during the Battle of Britain, this excellent exhibit includes period costumes, artifacts, and an air raid shelter.

Built for Henry VIII in 1540, Deal Castle (just 11 miles north of Dover) is widely considered to be one of the finest Tudor castles in England. It's also among the earliest and most elaborate of a chain of coastal forts that extends along the English Channel.

Visitors can explore the entire castle - as much a stately home as it was a fortress - and afterwards stroll the pleasant grounds and gardens. Be sure to also spend time wandering the quaint medieval town of Deal, one of the famous defensive and trade towns that made up the Confederation of Cinque Ports. The town also boasts great walking and biking trails.

This English Heritage site, just 15 miles north of Dover near Ramsgate, marks the place not just where Roman rule began in the British Isles, but also where it ended. The impressive ruin of the Roman town at Richborough was where the Romans launched their successful invasion of Britain in AD 43 and also where they departed centuries later after it was no longer tenable to rule the British.

The extensive remains of the walls and defensive ditches are well worth exploring, and a fun boat trip is available (weather permitting) that traces the route taken by the Romans when they arrived. A museum and shop are located on-site.

Located an easy 10-minute drive from Dover town center, the Dover Transport Museum offers an excellent few hours' distraction for young and old alike. The stars here are the vintage vehicles, with the museum's large halls boasting a large collection including everything from buses to taxis to cars and motorbikes.

Lining the halls are interesting replicas of store fronts and signage relating to various periods, from the time of the first public transit systems through two world wars right up to modern day means of transport. Of special interest is the maritime collection, which features displays and models relating to Dover's rich history as an important ferry link with Europe, as well as the not-so-long-ago Channel Tunnel construction.

There's also an extensive model railway layout that the kids can control themselves. Also of interest are a vintage Romany Caravan, as well as plenty of model cars to admire, and a sizable collection of artifacts relating to various periods of the town's history, from kitchenware to small appliances

Where to Stay in Dover for Sightseeing

We recommend these charming hotels and guesthouses handy to top attractions like Dover Castle and the famous White Cliffs of Dover: 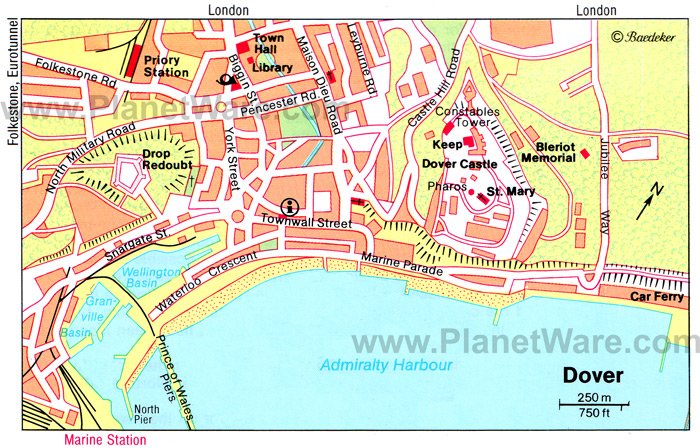 9 Top-Rated Attractions & Things to Do in Folkestone

13 Top-Rated Attractions & Things to Do in Canterbury

11 Top-Rated Attractions & Things to Do in Whitstable, England

11 Top-Rated Attractions & Things to Do in Rye, England