The port of Southampton lies on a peninsula between the mouths of the Rivers Test and Itchen and boasts one of the world's largest natural harbors. Until the 1930s, it was England's busiest port for transatlantic passenger travel, and giant liners like the Queen Mary were built in local shipyards.

Hundreds of thousands of emigrants departed the country on ships sailing from here, including the Titanic. It's still a busy port and is a fun place to visit and watch large cruise and cargo ships come and go. The views are especially good from the excellent Hythe Ferry service that runs regularly across the Solent, the 20-mile-wide strait that separates the Isle of Wight from the mainland.

Excellent shopping facilities are located both in and around the city, one of the best being Westquay. The city also hosts many cultural events, such as the Southampton International Film Festival. Other popular things to do in Southampton include exploring the New Forest and the Isle of Wight.

Nature lovers will also appreciate the city's many green spaces and parks, including the 326-acre Southampton Common. Another area of countryside to visit is nearby Itchen Valley Country Park, a beautiful 440-acre property offering great hiking and biking.

For details of these and other great reasons why this vibrant city is one of the best places to visit in England, read our list of the top attractions and things to do in Southampton.

See also: Where to Stay in Southampton

The best views of Southampton's 14th-century medieval walls – the third longest unbroken stretch of city wall in Britain – are obtained from the Western Esplanade, also the site of Wind Whistle Tower. The only remaining medieval church in Southampton is St. Michael's on Castle Way, built in the 11th century and containing Norman relics and a font made of Tournai marble.

Follow the walls south to Mayflower Park, which lies opposite the Mayflower Memorial to the Pilgrim Fathers, and Wool House, a 14th-century warehouse. Also nearby is the God's House Tower on Winkle Street, a 12th-century hospital dedicated to St. Julian.

A variety of fun guided walking tours of the old walls and medieval vaults are available. Try the easy-to-follow self-guided tour option, with maps available from the Tudor House shop.

The magnificent Tudor house in St. Michael's Square was built in the late 15th century for a wealthy merchant family. Now a museum, it displays exhibits from the Victorian and Edwardian eras, as well as periodic exhibitions encompassing more than 900 years of local history.

Visitors can use free audio guides while enjoying the reconstructed kitchens and numerous artifacts, including Georgian and Victorian jewelry, and archaeological finds from the medieval and Tudor periods.

A shop and café are located on the premises, and regular events and learning opportunities are available for visitors to participate in (check the attraction's website for details).

Another classic old home to visit is the Medieval Merchant's House in French Street, just a short stroll from the city center. Built in 1290, this historic townhouse has been fully restored and is one of the only surviving examples of its kind.

Highlights of a visit include seeing collections of period furniture and wall hangings, and unique architectural flourishes that offer a fascinating insight into the living conditions of a wealthy 13th-century family.

An easy 14-mile journey southwest of Southampton through parts of the New Forest, the National Motor Museum at Beaulieu is one of the world's largest museums dedicated to the automobile. Its many exhibits include the official collection of original James Bond vehicles, as well as other famous movie cars, including the flying Ford Anglia from Harry Potter, as well as the homemade cars constructed for the Top Gear TV series.

Also of note is the fantastic Palace House and Gardens. Formerly the 13th-century Great Gatehouse of Beaulieu Abbey, it's a delight to explore for its immaculate spreading lawns and walkways overlooking the Beaulieu River. There's also the opportunity to ride the attraction's monorail and vintage buses.

SeaCity Museum tells the story of the people of Southampton and their role in Britain's rich maritime history, including the stories of those who departed from (or arrived in) the port over the centuries. The Titanic Story exhibit also tells of Southampton's connection to the ill-fated vessel, which sailed from the port in 1912.

The 1930s Art Deco Civic Centre that houses this fascinating museum is also home to the Southampton City Art Gallery. Here, you'll see an interesting selection of some 3,500 works, including old masters and English artists from 1750 to the present, as well as a valuable collection of ceramics. Food and shopping facilities are available.

The Titanic departed Southampton on her doomed maiden voyage to New York, and as a result numerous sites around the city are associated with the vessel. One of the best ways to learn about the city's connections to the ship is through the informative Titanic Trail. Maps are available from local tourism offices and many popular tourist attractions across the city, or on the SeaCityMuseum website.

Along the way, you'll visit the remarkable Titanic Engineers' Memorial in East Park, a beautiful bronze and granite monument unveiled in front of a crowd of 100,000 Southampton residents in April 1914 (none of the ship's 35 engineers survived). Nearby is the Titanic Musicians' Memorial, dedicated to the ship's musicians.

Part of Britain's National Historic Fleet, SS Shieldhall is the largest surviving working steamship of her type in Europe. Built in 1954 as one of the Clyde sludge boats, this impressive vessel has been fully restored and provides a working example of the machinery typical of the great ships that plied the world's oceans between the 1870s and 1960s.

In addition to educational and sightseeing outings, the ship regularly appears in the Southampton Mayflower Maritime Festival held each summer. Highlights of this three-day spectacle include a host of activities, displays, and attractions, including historic vessels, vehicles, and fly-overs by vintage aircraft.

Solent Sky uses a fantastic collection of models and photographs, as well as numerous magnificent flying machines, to tell the story of Southampton's aviation heritage. The region is famous for its experimental and development work between 1908 and the late 1960s, the most famous being the iconic Spitfire.

Showpieces of the museum are the huge Sandringham flying boat and the Supermarine racing seaplane (the predecessor of the Spitfire) that won the Schneider Trophy in the early 1930s.

Just to the south of the city center, Southampton's Old Town has many unique locations associated with famous residents and visitors. These include William the Conqueror, Henry V, William Shakespeare, the Pilgrim Fathers, Isaac Watts, and Jane Austen.

Originally built as the main gateway to the medieval city, 800-year-old Bargate marks the entrance to the Old Town and is used to host temporary art exhibits and events. Numerous plaques have been laid from Bargate down to the waterside to commemorate key events, from the early Roman settlement to the opening of the National Oceanography Centre.

East of Southampton's old town, Princess Alexandra Dock has been transformed into a modern leisure and shopping center. You'll see plenty of luxury yachts moored in the harbor in front of Canute's Pavilion, with its designer boutiques, gourmet restaurants, and cinemas, including one for arthouse and foreign-language films.

Other fun things to do in Ocean Village include boat trips, sailing facilities, and enjoying the great views of the cruise ships moored in the Eastern Docks.

Given its importance as one of the world's largest and busiest ports, it should come as little surprise to learn that Southampton also serves as an important ferry hub for local passenger traffic, too. And if there's time in your travel itinerary, a ride aboard a Southampton ferry can be a lot of fun – even if it's a short one.

A fun excursion can be enjoyed aboard the vessels of the Hythe Ferry. Sailing from the Town Quay (parking is free), this 15-minute, passengers-only journey to the town of Hythe offers superb views back over the city, as well as of the many large cruise ships that berth here. In fact, it was from these docks that the RMS Titanic departed on her fateful journey.

Part of the fun is the journey to the ferry departure point at the end of Hythe Pier. Used by tourists and commuters alike, the Hythe Pier Railway is the UK's oldest electric pier train, in operation continuously since 1909 to transport passengers along what is one of the longest piers in the country (it's 640 meters long).

Be sure to spend a little time exploring Hythe, too. In addition to the splendid views back over Southampton, it can also serve as a jumping-off point from which to explore the lovely New Forest area, or the popular National Motor Museum at Beaulieu (local bus services will get you there in minutes, as its just five miles from Hythe).

The magnificent ruins of Netley Abbey, founded in 1239, have inspired many English writers, poets, and artists over the years, most notably the painter John Constable. The village of Netley is also worth visiting and is associated with famous people such as Queen Victoria, who laid the foundation stone of the Royal Victoria Military Hospital, which Florence Nightingale helped design.

It's also where Arthur Conan Doyle's fictional Dr. Watson was said to have trained. Nearby is the Royal Victoria Country Park, which covers some 200 acres of woods and parkland, as well as a small shingle beach.

Where to Stay in Southampton for Sightseeing

In Southampton, most of the top attractions are scattered around the city, including the Tudor House and Garden, the old city walls, the SeaCity Museum, and the Titanic Trail. For easy access to all these attractions as well as the port, the center of town makes a great base - especially for first-time visitors.

Visitors traveling to the city to board a cruise ship often stay near the southern end of town for easy access to the terminals. Here are some highly-rated hotels in these convenient locations: 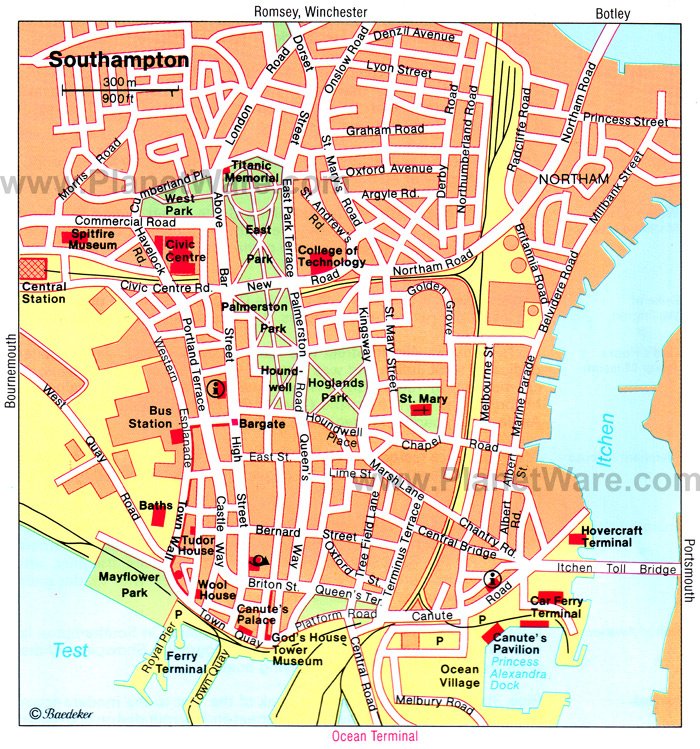