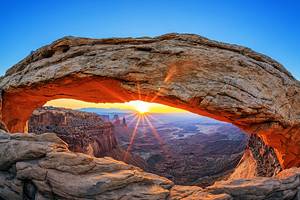 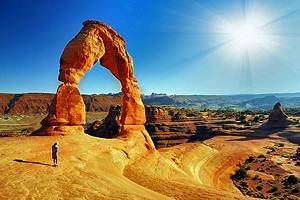 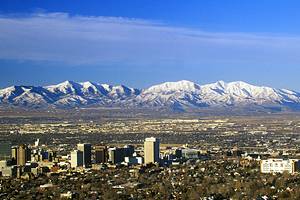 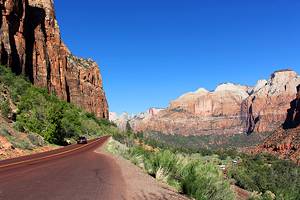 11 Top Attractions & Things to Do in Zion National Park

Whether you're witnessing the sunrise over the fairy chimneys of Turkey's Cappadocia or zebras and wildebeest migrating across the plains of the Serengeti in Tanzania, doing so while riding in the basket of a hot air balloon takes the experience to a whole new level.

Most always experienced at sunrise, although some ballooning companies also run sunset tours, hot air balloon rides are an enchanting and exciting way to explore a new place. The perspective from above is so different than you'll get adventuring on foot, and while rides can be costly, the experience is usually worth the price. From Utah's Monument Valley to the red sand dunes of Sossusvlei in Namibia, check out our list of the best hot air balloon rides in the world.

Easily one of the world's most famous hot air balloon rides is over Cappadocia's fairy chimney rock formations. Just outside the town of Goreme in south central Turkey, the chimneys are otherworldly, cone-like rock formations and caves that look especially amazing when viewed from the basket of a hot air balloon at sunrise. Note, the views are also pretty cool from the ground, watching the balloons ascend above the whimsical landscape.

A number of ballooning companies run hot air balloon rides through this region that usually last between 45 minutes and two hours. There are a few different flight options, and what you pick will depend on your budget and how much time you want to spend in the sky.

The most affordable balloon rides are group trips, but these also stay up less time and carry more people. For the experience of a lifetime, try a private tour that stays up longer and allows for better Instagram selfies.

You know the opening credits of The Lion King, where they give you a bird's-eye view across the savannah, and you see all the animals on the move? You can have that visual in real life when you book a hot air balloon ride over Tanzania's Serengeti National Park with Serengeti Balloon Safaris.

From above, you'll have an unobstructed view of lions, elephants, hippos, and giraffes just going about their lives. And from so far up, they won't notice you, so you'll be seeing Africa's magnificent wild animals in all their undisturbed beauty. This is truly a once in a lifetime experience.

The shifting red and orange sands of the Namib Desert around Sossusvlei in still undiscovered Namibia are amazing when seen from the ground and truly out of this world when seen from above. Drifting over the dunes' constantly shifting designs under a cloudless, blue African sky is a soul soothing, once-in-a-lifetime adventure you won't ever forget. You'll pass over (or as close as the winds take you to) the tallest and oldest dune on the planet.

Organize your hot air balloon safari through the Sossusvlei Lodge. Because these dunes are so remote, you can't just visit on a day trip, and this is one of the top places to stay near the NamibRand Nature Reserve. They do sunrise balloon rides (truly incredible as the light's contrast on the sand is most intense during the first hours of the day) as part of a 3.5-hour excursion that includes an hour up in the air followed by an extravagant bush breakfast served al fresco at the landing spot.

For nine days in October, Albuquerque becomes the epicenter of the hot air ballooning world when it hosts the Albuquerque International Balloon Fiesta. The annual event is the largest hot air balloon race and festival on the planet and features mass ascents, with hundreds of balloons rising at once, as well as speed racing competitions. It is quite an experience.

But even if you don't visit New Mexico's largest city during this fiesta, you can still experience hot air balloon rides over the mountain-meets-high-desert landscape throughout the year. There are a number of ballooning companies, including World Balloon, around town offering flights, and Albuquerque's usually sunny weather makes it an ideal climate as well.

Seeing Egypt's Valley of the Kings from the basket of a hot air balloon, as the sun rises and turns the desert and lush green of the Nile River landscape golden, is a sight you won't ever forget. Luxor has a number of ballooning companies offering you the chance to see the ancient tombs and temples from above, including Sindbad Balloons.

Trips depart in the early morning, and the direction and length of each flight is determined by the weather and winds that day.

On the Arizona-Utah border, Monument Valley is another amazing place to take a hot air balloon ride. The scenery here is straight out of an old Western movie (in fact, it has played the backdrop to many a movie scene over the decades) with wide-open spaces filled with towering red rock formations, as well as mesas and gorges.

From a balloon's basket, you get a panoramic aerial view that makes you appreciate how vast and empty this landscape really is. This is a great sunrise balloon experience. A number of companies offer tours, including Monument Valley Hot Air Balloon Rides.

Another of the world's best once-in-a-lifetime ballooning spots is the Bagan region of Myanmar, where thousands of ancient temples, monasteries, and pagodas built between the 11th and 13th century are spread across the plains. From the basket of a balloon, you can really get a grasp of how large this civilization was, and when the sun is just coming up, the ruins appear to glow orange and gold with the first rays. A number of companies offer hot air balloon safaris over this World Heritage Site in Bagan, including Oriental Ballooning.

New Zealand's adventure sports capital of Queenstown is a popular place to spend some time flying through the air. Many choose to do so by skydiving, bungee jumping, or hang gliding, but for a tamer, and often romantic, airborne experience, hop into the basket of a hot air balloon.

Sunrise Balloons offers, you guessed it, sunrise balloon safaris that show off the stunning natural beauty from an aerial perspective, but one that is not dependent on releasing massive amounts of adrenaline into your bloodstream. This allows you to appreciate the scenery a little more; plus at around an hour, hot air balloon rides last a lot longer than jumping out of an airplane.

In summer, one of the top outdoor adventures you can have in Park City, Utah's famous ski destination, is a hot air balloon ride. Park City Balloon Adventures runs sunrise trips that offer stunning views of the Kamas Valley and the historic streets of Park City, which become smaller and smaller as you ascend. To the west, the rugged Wasatch Mountains are set aglow with the rising sun, and it is impossible to not feel moved by all this natural beauty.

Note, weather depending, you can also book a hot air balloon ride in winter in Park City. While chilly at first, it is still a magnificent experience, especially watching the sunrise over the snow-covered landscape. If you're celebrating a honeymoon or anniversary with your significant other in Park City, a winter hot air balloon ride might feel more romantic, as they're usually less crowded as well.

Arizona's out-of-this-world beautiful red-rock country around Sedona is another of the world's best places to visit to take a hot air balloon ride. The larger-than-life scenery is best appreciated in full from above as the sun rises and makes the rocks glow crimson in a pink- and purple-tinged sky. It's a serene yet magnetic experience that goes hand in hand with Sedona's reputation as a home to important energy fields in the Earth, known as vortexes. Recommended ballooning companies include Red Rock Balloon Adventures.

If you want to go up in a hot air balloon, but the thought of floating freely through the sky terrifies you, try a tethered balloon ride at Aerophile in Walt Disney World's Disney Springs. For this balloon trip, you'll ascend about 400 feet into the sky and take in 360-degree views of the park below during an eight-minute experience.

On a clear day, you can see as far away as 10 miles from this custom-built-for-Disney balloon with a 19-foot diameter basket that can hold 30 people, including the pilot. The other cool thing about a tethered balloon flight is the cost. It's just $20 for adults and $15 for children, which is a fraction of what you'd pay for an untethered adventure.

With its beautiful landscape of golden and green hills and medieval villages and castles, drifting above Italy's Tuscany region in a hot air balloon is one of the most romantic things you can do around here — it wouldn't be a bad place to propose, honestly. It is worth waking up before dawn to take a sunrise flight with Tuscany Ballooning to watch the landscape glow and lighten with the rising sun. Afterwards you'll be treated to a local Tuscan breakfast with farm-fresh produce and fresh baked bread.

Floating over chateaux and medieval villages in the ultra-picturesque Loire Valley in France is a romantic experience. A UNESCO World Heritage Site that is also home to a winding river and lush green countryside, the Loire Valley is just two hours south of Paris but feels like worlds away.

The best time to go for a hot air balloon ride is at sunrise or sunset, when the shifting light sets the countryside on fire. Spring and summer are especially appealing, as the fields are brightened with everything from sunflowers to rows of corn.

In the Australian city of Melbourne, you can have an urban hot air balloon experience, which is something different than most of the places listed here. Trade in historic landmarks and scenic landscapes for skyscrapers and city landmarks. You'll float over the top of Melbourne sights like the Royal Botanic Gardens, Shrine of Remembrance, Yarra River, and even the cricket stadium as the sun comes up.

A number of ballooning companies operate out of Melbourne, including Picture This Ballooning and Global Ballooning Australia.

In ancient times, Teotihuacan in Mexico was the largest pre-Columbian city in the Americas, with buildings dating back to 300 BC. Also known as the City of the Gods, it is home to giant pyramids that are extremely well preserved. Seeing these temples from above, floating over them looking out from the basket of a balloon, is a surreal, once-in-a-lifetime experience that should be done if you make it to these ruins about 30 miles outside of Mexico City. The way the pyramids are lit by the rising sun is truly stunning.

Another hot air balloon ride over ancient ruins that should not be missed is Cambodia's most well-known landmark, Angkor Wat. Covering more than 500 acres, this UNESCO World Heritage Site is the planet's largest religious monument and one of the top attractions in South East Asia.The temple complex dates back to the early 12th century, when it served as the Khmer Empire's capital, and remains very well preserved today. Seeing Angkor Wat from above, either at sunrise or sunset, is an awe-inspiring experience sure to take your breath away.

Accommodation: Where to Stay in Siem Reap: Best Areas & Hotels

Drift over a dramatically beautiful but barren desert landscape of Wadi Rum, Jordan, our final choice for the world's best hot air balloon rides. The Zalabia Bedouin people have called this area home for millennia now, leading a nomadic life in the copper-sand desert dusted with sandstone mountains and wild rock formations, including one named after E.E. Lawrence's autobiography the Seven Pillars of Wisdom. The landscape here is similar to the fairy chimneys of Cappadocia to give you some perspective. Go at sunrise for a once-in-a-lifetime experience. 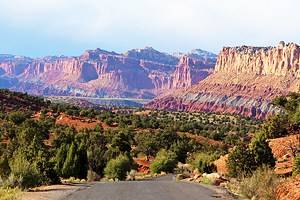 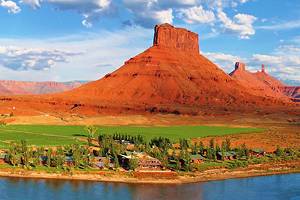 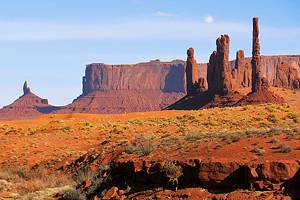 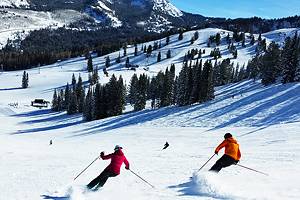 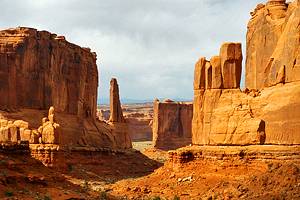 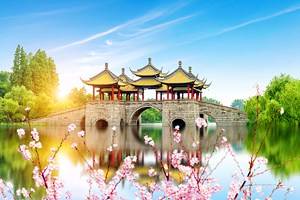 14 Best Places to Travel in April 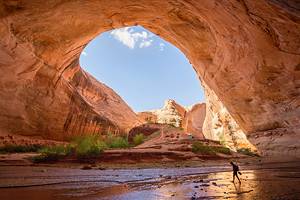 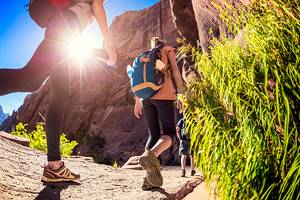 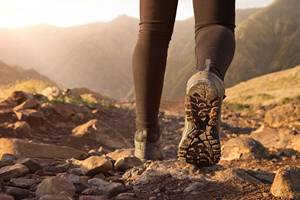 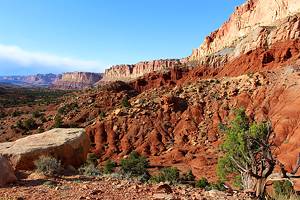 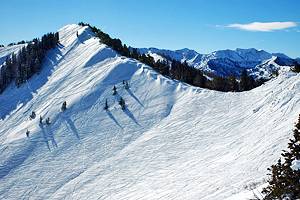 10 Top-Rated Attractions & Things to Do in Park City, UT 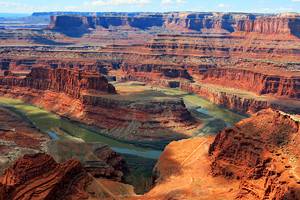 16 Top-Rated Things to Do in Moab, UT 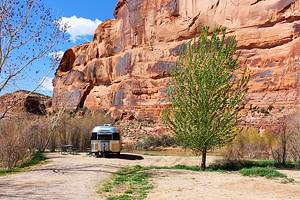 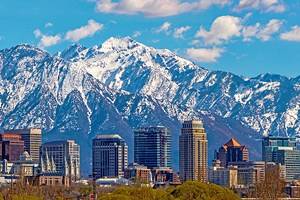 13 Dog-Friendly Beaches in Florida
BE INSPIRED

16 Most Beautiful Islands in the World
BE INSPIRED!
MORE PICTURES OF UTAH