The Loire Valley delights visitors with its enchanting fairy-tale castles and lush wooded parklands. Because of its exceptional cultural value, UNESCO has designated the entire 280-kilometer Loire Valley (between Chalonnes and Sully-sur-Loire) as a World Heritage Site.

When travelers decide on how to get to the Loire Valley from Paris, they should keep in mind their personal preferences. The style of vacation and travel itinerary will affect the choice of transportation.

A guided tour is the easiest way to see the highlights of the Loire Valley. Most tours include several top attractions in a full-day tour, which gives visitors a chance to see the essential places on a short visit. Plus, organized excursions ensure a stress-free travel experience.

1. From Paris to the Loire Valley on a Guided Tour

The Loire Valley is often visited as a day trip from Paris because it is only a two-hour drive to this marvelous area, where some of the most famous and most magnificent châteaux of France are found. Taking a guided tour is the best option for seeing several castles on a day trip, because it is difficult to visit multiple castles without a car.

An excellent organized tour option is the Loire Valley Castles Small Group Day Trip from Paris. This full-day tour has a very early departure time (6:30am) but does pick up and drop off participants at their Paris accommodations.

The tour includes visits to the Château Royal d'Amboise, a majestic Renaissance-era royal residence; the elegant Château de Chenonceau, with its iconic gallery built as an arched bridge across the Cher River; and the largest Loire Valley castle, the Château de Chambord, which is considered a symbol of the French Renaissance.

For a more in-depth visit to the Loire Valley, tourists can take a two-day tour. The 2-Day Loire Valley Castles Tour includes three must-see castles: Château de Chenonceau, Château de Chambord, and Château de Cheverny. Plus there are stops at lesser-known but noteworthy castles: the Château de Villandry, which has exquisite gardens; and the Château du Clos Lucé, the final residence of Leonardo da Vinci.

The two-day itinerary also includes visits to picturesque villages and the historic town of Tours. Dinner on the first night and overnight accommodation in a four-star hotel are provided.

2. From Paris to the Loire Valley by Car

Among the top attractions in the Loire Valley, the closest location to Paris is Chartres (just 89 kilometers away, about a one-hour-and-15-minute drive). Chartres has a glorious medieval cathedral that wows visitors with its soul-inspiring Gothic architecture and dazzling 13th-century stained-glass windows.

Orléans, the legendary city associated with Joan of Arc, is 130 kilometers south of Paris (a little more than a 1.5-hour drive). In this attractive riverside town, tourists can marvel over Joan of Arc's life story at the Maison de Jeanne-d'Arc (museum) and admire the monumental twin-towered cathedral where Joan of Arc prayed.

The Loire Valley's largest town, Tours is 238 kilometers south of Paris (about a 2.5-hour drive). Tours has a charming historic center with a splendid Flamboyant Gothic cathedral and an excellent museum of fine arts. The Château de Villandry, renowned for its formal gardens, is just 17 kilometers from Tours.

It's worth driving a bit out of the way from Tours to the Château du Rivau for a romantic getaway. Nestled in a parkland 11 kilometers from Chinon, this turreted medieval castle features a contemporary garden classified as a "Jardin Remarquable." The Château du Rivau devotes 12 rooms to its bed and breakfast hotel. The breakfast is prepared from fresh ingredients grown locally, including on the property's farm.

3. From Paris to the Loire Valley by Train

Taking the train from Paris to the Loire Valley is a good option if you want to visit just one château on a day trip. Some of the most-visited châteaux offer shuttle service to and from the nearest train station. Travelers can check the SNCF train schedules.

The Château de Chambord, the largest and most famous castle in the Loire Valley, can be reached by taking a one-hour-and-45-minute SNCF train ride from the Austerlitz station in Paris to the Blois-Chambord station. A shuttle bus service is provided from the Blois-Chambord station to the Château de Chambord; the shuttle ride takes about 35 minutes.

Another way to reach the Château de Chenonceau is by taking the one-hour TGV train (high-velocity train) ride from Paris Montparnasse station to the Tours station and then connecting in Tours to the SNCF train to Chenonceaux station (the train ride from Tours takes about 30 minutes).

Traveling by train also makes sense for those who are spending several days in the Loire Valley or combining the Loire Valley visit with a larger itinerary that includes other tourist attractions in France. Depending on the destinations of a travel itinerary, renting a car may be more practical, especially in the neighboring Burgundy region.

An interesting travel itinerary through the Loire Valley could include several train station stops: Chartres to see its exquisite Gothic cathedral; the town of Blois, which has shuttle bus services to the Château de Chambord; Amboise, a charming medieval town with a spectacular Renaissance-era castle (Château Royal d'Amboise); and the picturesque old ducal city of Bourges, with its richly adorned, UNESCO-listed Gothic cathedral.

The town of Tours is also accessible by train from Paris, although the route is not direct (so it requires a connection). Visitors enjoy wandering the cobblestone streets of Tours' historic center to discover pleasant squares and admire quaint half-timbered houses. Other attractions of Tours are the Musée des Beaux-Arts, which displays a superb collection of paintings, and the Gothic cathedral, which has marvelous 13th-century stained-glass windows.

4. From Paris to the Loire Valley by Bus

The FlixBus has a direct bus route from Paris to Blois, which takes three hours, but this bus service only runs once a day in the late afternoon. Tourists who choose this option will want to spend a few nights in Blois as a base for exploring the Loire Valley châteaux.

The advantage of staying in Blois is the bus shuttle service from the Blois SNCF train station to several of the most noteworthy castles: Château de Chambord, Château de Cheverny, and Château de Beauregard.

Travelers who are interested in the story of Joan of Arc should travel to Orléans. The BlaBlaBus runs frequent, direct bus routes from Paris (Bercy Seine) to Orléans. This option could work as a day trip from Paris or for spending a few nights in the Loire Valley based in Orléans.

FlixBus has a direct bus that runs several times a day from Paris to Orléans and takes around two hours. However, certain days of the week the bus only runs in the evenings. On Fridays, Saturdays, and Sundays, the buses run frequently enough that travelers could take a day trip from Paris to Orléans.

After arriving in Meung-sur-Loire, visitors can get around the area by bicycle. There are many beautiful cycling trails around Meung-sur-Loire and Orléans (as well as throughout the Loire Valley). The Office of Tourism in Meung-sur-Loire (1 Rue Emmanuel Troulet) has bicycles that are available for rent by the day.

Another option to get to the Loire Valley on the FlixBus is the bus route from Paris to Tours, 17 kilometers from Villandry. The 16th-century Château de Villandry is renowned for its lavish Renaissance gardens. It's feasible to visit as a day trip from Paris in July or August, when the Fil Bleu shuttle bus service runs from Tours to the Château de Villandry.

At other times of year (anytime except July and August), when the Fil Bleu shuttle bus service is not available, spending a few nights in Tours makes more sense if you take the FlixBus.

For those who extend their stay in Tours, there are other dreamy castles to visit nearby. About 30 kilometers (a 25-minute taxi ride) from Tours is the Château d'Azay-le-Rideau, a gem of Renaissance architecture. This unique castle was built on an island in the Indre River and is surrounded by a romantic parkland.

For those who want to visit the Loire Valley as a day trip, the BlaBlaBus offers frequent direct bus service from Paris (Bercy Seine) to Tours several times a day (with departures almost hourly). Although to see more than just one chateau, it's best to spend a few nights in Tours. 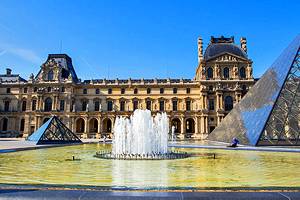 Planning a Stay in Paris: Many tourists travel to the Loire Valley as a day trip from Paris, where they are basing their vacation. To get the most out of visiting Paris, learn about the top tourist attractions such as the historic churches and world-class museums. Plan ahead by deciding where to stay in Paris, so that you choose a hotel that suits your preferences. 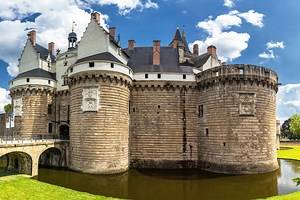 Nearby Attractions by Train: From Tours in the Loire Valley, it's a 2.5-hour train ride to Nantes, where the Edict of Nantes was signed in its impressive cathedral. Tourists enjoy wandering the city's quaint cobblestone streets and soaking up the scene at bustling cafés. Another easy trip from Tours is the two-hour train ride to La Rochelle, an atmospheric Atlantic Coast port town surrounded by medieval walls. 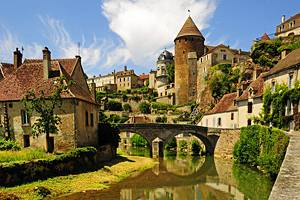 Visiting Burgundy by Car: A driving itinerary is best for visiting the Burgundy region, which has many wonderful historic towns and country villages that are inaccessible by train. From Bourges, it's a two-hour drive to Auxerre, a charming riverside city with many architectural treasures. It also takes about two hours by car from Bourges to Vézelay, a beautiful village with a UNESCO-listed basilica. The city of Dijon is a 3.5-hour drive from Bourges; it would take much longer to get there by train.

From Paris to Versailles: 6 Best Ways to Get There 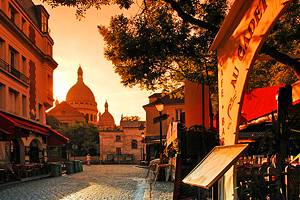 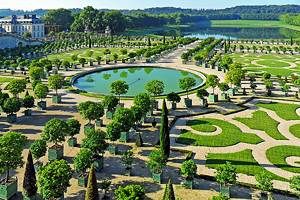 11 Top Things to Do in Winter in Austria
BE INSPIRED

16 Most Beautiful Islands in the World
BE INSPIRED!
MORE PICTURES OF FRANCE