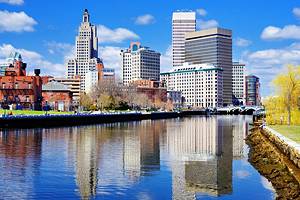 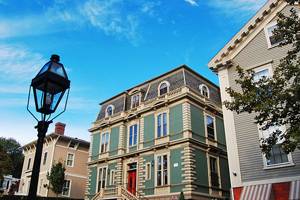 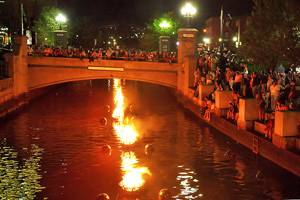 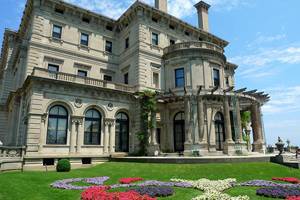 Written by Barbara Radcliffe Rogers
May 4, 2020

For such a small state, "Little Rhody" is packed with some of New England's most popular tourist attractions. Newport, America's best-known playground for the super-rich in the halcyon days of the early 20th century, is the state's major draw, with its fabled mansions built to rival (and often imitate) the grand palaces of European royalty.

But Providence, too, is filled with the history of an earlier period, when its merchants grew rich on the slave trade and other lucrative commerce. Add miles of beautiful beaches — Rhode Island has an extensive shoreline — a rich industrial history, and an idyllic island, and you'll see why Rhode Island should be on any New England itinerary.

You and your family will find lots of places to go and things to do in our list of the top tourist attractions in Rhode Island.

Newport's most celebrated — and showiest — Gilded Age mansion was built by Cornelius Vanderbilt in 1895 and reflects the unimaginable wealth of the Vanderbilt family. The Italian Renaissance "summer cottage" has 70 rooms, including a grand three-story dining room, and was built using imported French and Italian marble and alabaster.

Ceiling paintings, mosaics, marble columns, fine wood paneling, and carved stucco decorate its rooms lavishly and ostentatiously, as was intended by the Vanderbilts, who never risked being outdone by their wealthy competitors.

Accommodation: Where to Stay in Newport

Despite past efforts of mansion owners on the preferred ocean side of Bellevue Avenue to close off access, Newport's Cliff Walk has remained a public walking path since the days when the great palaces were at their prime.

The pathway along the rocky shore provides walkers with views of breakers crashing on the rocks below, as well as the mansions' gardens and sea-facing facades above, and is one of the most popular — and free — things to do in Newport. The Cliff Walk begins well before The Breakers, the first major mansion it skirts, and after 3.5 miles, it passes by Rough Point, at the end of Bellevue Avenue. The exotic Tea House at Marble House stands just above the path.

Despite its history as one of the country's oldest zoos, Roger Williams Park Zoo is an outstanding example of modern zoo design and ethics. Largely cage-free, the zoo is a place where animals live in environments as close as possible to their native habitat, and where visitors can see them with a minimum of visible barriers.

In the 40-acre zoo, they can watch snow leopards, zebras, alligators, wildebeest, giraffes, elephants, kangaroos, red pandas, and dozens more native and exotic creatures in a setting that encourages kids and adults to learn more about them, their habits, and their habitat.

Because of its kid-friendly atmosphere and the number of things to do here, Rogers Williams Park Zoo is one of Rhode Island's most popular places to go for families

The 435-acre park also contains a Botanical Center with New England's largest public indoor display garden, the Museum of Natural History, a planetarium, and a carousel.

Accommodation: Where to Stay in Providence

The four-acre Waterplace Park and Riverwalk border the Woonasquatucket River as it winds through Downcity, Providence. Several times during the spring, summer, and fall, the city celebrates this river, which until late in the 20th century, was completely covered by roadways.

More than 100 bonfires are lit in large iron pans in the river's center and kept blazing throughout the evening as residents and tourists stroll along the brick riverside walkways and footbridges. Street performers, vendors, and world music highlight these family-friendly celebrations.

Philadelphia coal magnate Edward J. Berwind commissioned his mansion to be based on the mid-18th century Château d'Asnière, near Paris. Completed in 1901, the Berwinds' summer home was embellished with Venetian paintings and furnished in French antiques from the period of the chateau it was modeled after.

Tours reveal details about the staff that was responsible for maintaining the house, and about the building's technical systems. Be sure to allow time to visit the restored Classical Revival gardens, especially the lower gardens, which feature fountains, a sunken garden, and marble pavilions.

The Museum of Art at the Rhode Island School of Design in Providence is remarkable not only for the staggering numbers of its collections, but for their breadth of scope. The historical and contemporary textiles and dress collection alone totals more than 26,000 objects, from ancient Egyptian clothing fragments and Elizabethan needlework to 20th-century American designers and Japanese Noh theater robes.

The museum's shop is always a good source of gifts and household items that are unusual and reflect cutting-edge design.

If you're up for more mansion viewing after Bellevue Avenue, follow it to the end at Coggeshall Avenue and continue left to follow the shore past Bailey's Beach. The next 10 miles take you past more Gilded Age "cottages," as well as some of the newer Newport mansions. The most sumptuous will be on the left, the ocean side, as the route curves around the southern shore of Aquidneck Island.

Brenton Point State Park is a good place to stop for a picnic or just to sit and watch the sea. The usually steady breeze on the point makes it a favorite place to fly kites.

The road turns right at Brenton Point, and you'll pass the U.S. Coast Guard Station, then see Hammersmith Farm on a hillside (this is where President Kennedy's wedding reception was held in 1953).

At Fort Adams State Park, you'll find several things to do, including the Museum of Yachting, and President Eisenhower's summer White House. The Newport Folk and Jazz Festivals are held in the park.

The grandest and most famous of Newport's mansions spread grandly in a row between Bellevue Avenue and the ocean; Cliff Walk gives views of the ocean side, while a stroll down Bellevue reveals their facades and grand entrances.

Rosecliff belonged to one of Newport's most legendary hostesses, and was designed after Louis XIV's Grand Trianon at Versailles. Its grand ballroom — Newport's largest — was the setting for The Great Gatsby and True Lies.

Marble House, built in 1892, was designed by the same architect as The Breakers, but pre-dates it. Modeled on the Petit Trianon at Versailles (French palaces were the model of the day), the house has an opulent gold-encrusted ballroom, inspired by the hall of Mirrors at Versailles.

More personal — and the only one that was really lived in as a home —Rough Point is at the far end of Bellevue Avenue and Cliff Walk. It is also the only of the mansions whose furnishings and collections remain as they were. Heiress Doris Duke collected art and antiques with a discerning eye, and a tour here is like visiting her private home, filled with treasures she chose and loved.

If long stretches of fine white sand beckon you, head for the towns of Narragansett and South Kingstown, south of Providence, to find a string of public beaches on the protected waters of Narragansett Bay.

Farther south, more beaches face onto Long Island Sound, where the surf can be a bit heavier. Watch Hill is a delightful old-fashioned resort town with an excellent beach, a lighthouse, and a historic carousel.

Accommodation: Where to Stay in Narragansett

A museum shows the history of the park, which was formerly the country farming estate of the wealthy Samuel Colt and contained a main house, barns, stables, and statuary of mythical Greek gods and goddesses. The barn, one of the only original buildings of the estate still standing, housed prize Jersey cattle.

Accommodation: Where to Stay in Bristol

Ten miles offshore, Block Island is reached by ferry from Point Judith (Galilee), on the south coast. From laid-back little New Harbor, where you'll find lodging and dining, you can bicycle or walk to several beaches or to the Victorian Southeast Lighthouse. So solidly does this brick building and its light tower sit atop its bluff, you'll be surprised to hear the story of how it was moved in 1994 to keep it from falling off its eroding bluffs into the sea.

Mohegan Bluffs are a three-mile stretch of coastal cliffs with a 200-foot drop to the ocean. At the foot of these is a beautiful beach, although the prospect of climbing back up the 151 steps might discourage you.

At the northern tip of the island is the 1867 North Lighthouse, where there is an interpretive center. Miles of trails crisscross the island and are popular with birders who come to spot the more than 150 species stopping here in the fall. A weekend on this island with its far-away feeling is one of the most romantic things to do in Rhode Island

Accommodation: Where to Stay on Block Island

Overlooking Narragansett Bay, Blithewold was built in 1908 for Augustus Van Wickle, and resembles a 17th-century English country manor. Its 45 rooms are furnished much as they were when the family lived here and decorated with their collections of Baccarat crystal, Gorham silver, more than 30 sets of fine china, several Tiffany lamps and dolls, along with objects collected in their travels.

The house was designed with large windows facing the water and overlooking the estate's 33 acres of gardens. Among the finest New England gardens open to the public, those at Blithewold include a water garden, an enclosed garden, display gardens, a rock garden, and a rose garden. The more than 500 different varieties of trees, shrubs, and plants include the East Coast's largest giant sequoia and a bamboo grove.

Known today as "The Mile of History," Benefit Street was the social, cultural, artistic, civic, and intellectual heart of Providence in the colonial and early Federal periods. You can immerse yourself in these exciting times for the young country just by walking this mile of stone- and brick-paved street.

What makes Benefit Street especially interesting is that it is not a frozen-in-time museum street but a vibrant neighborhood, where later additions of Victorian and a few 20th-century buildings keep it in the here-and-now. Some of Providence's most interesting architecture is here, and a stroll along it will reveal beautiful gardens, a family burial ground, and churches, as well as period homes.

The most spectacular of these is the John Brown House, built for prosperous colonial merchant, John Brown. He was the first to build outside the crowded waterfront, but from high on this hill he could see his wharves at India Point, from which his ships plied their profitable China trade.

The elegant home is still filled with the original Brown family furnishings, which include some of the finest examples of works by Rhode Island's famed cabinetmakers, as well as early decorative arts. If you can see only one colonial home here, make it this one.

Sailing, and most particularly the America's Cup race, is deeply ingrained into Newport culture and history. To gain a sense of this, and to see models and actual restored boats - including one that's considered the most beautiful hull form ever created - visit the museum commemorating the Herreshoffs and their boat designs.

Their most legendary feat was designing and building eight consecutive successful defenders of the America's Cup, from 1893 to 1934. The America's Cup Hall of Fame is part of the museum, which features more than 60 sailing and power yachts along with displays and videos on boat building and sailing. 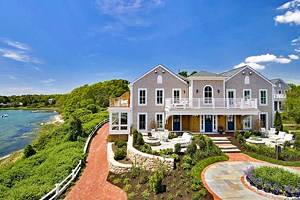 More nearby Places to Visit: Traveling west, you'll find the cities of Hartford and New Haven, home of Yale University and its museums. If you're visiting in summer, you'll likely want to take advantage of the water. On the shore, along with Connecticut's beautiful beaches and top beach hotels, you'll find plenty of things to do in Mystic at its famous maritime museum. 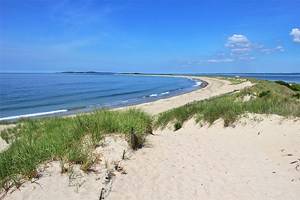 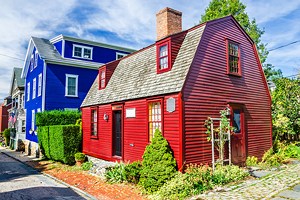 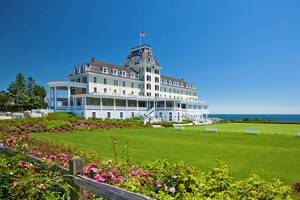 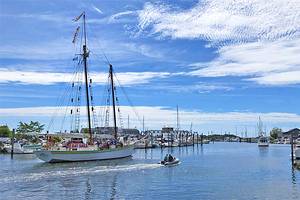 13 Top-Rated Things to Do in Mystic, CT 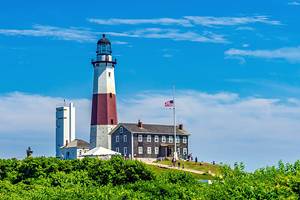 11 Top-Rated Attractions & Things to Do in Montauk, NY 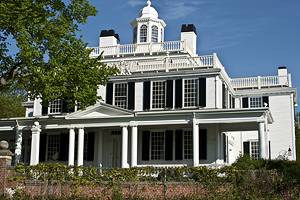 14 Top-Rated Attractions & Things to Do in Plymouth, MA 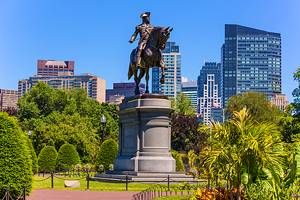 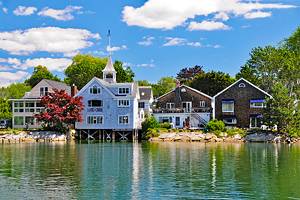 12 Top-Rated Weekend Getaways in the Northeast 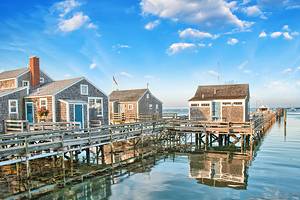 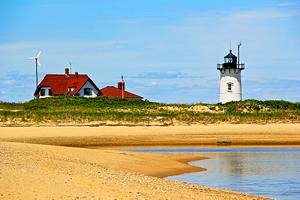 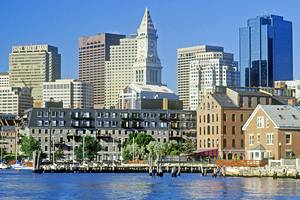 15 Best Places to Visit in Massachusetts 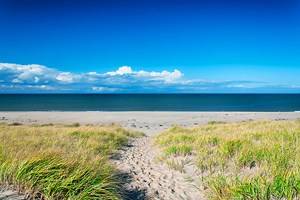 From Florence to Cinque Terre: 3 Best Ways to Get There
BE INSPIRED

16 Most Beautiful Islands in the World
BE INSPIRED!
MORE PICTURES OF RHODE ISLAND