11 Top-Rated Things to Do in Lone Pine, CA

Bounded by the Sierra Nevada Mountains to the west and the Inyo Mountains to the east, Lone Pine is within the stunning Owens Valley of Eastern California. And the town also lies on the outskirts of California's Great Basin Desert. This geography puts Lone Pine uniquely between the highest mountain in the mainland United States and the lowest elevation in North America.

To say Lone Pine is a vacation spot of extremes is underselling the visitor experience. From challenging day hikes with 12,000 feet of elevation gain to desert excursions into the Fiery Furnace, Lone Pine lures tourists with all types of superlatives and bucket-list adventures.

And with nearby places to visit, like the Inyo National Forest and the Alabama Hills, tens of thousands of explorers utilize Lone Pine as a basecamp every year. And it's not just the adventurous spirit that draws a crowd. The city also offers Hollywood history, World War II memorials, and local cafés with pancakes the size of dinner plates.

Find your next bucket-list California adventure with our list of the top things to do in Lone Pine.

Mt. Whitney, the tallest mountain in the lower 48, stands impressively on the western horizon of Lone Pine at over 14,000 feet. Remarkably, hikers can leave Lone Pine (elevation 3,727 feet) in the early morning and roundtrip summit the mountain in a day.

The day summit is possible thanks to the Mt. Whitney Trail, which starts at the end of the Whitney Portal, 12 miles west of Lone Pine. During summer conditions, no mountaineering equipment is needed to reach the top. Thousands of hikers attempt the route throughout the summer and into the shoulder seasons.

The 22-mile round trip gains over 12,000 feet of elevation. It is a strenuous and challenging endeavor. And yet, an estimated 20,000 hikers attempt the route each year. Because of this popularity, a lottery permit system is in place to limit traffic.

Both day hiking and backpacking the Mt. Whitney Trail requires a permit from the Forest Service. A lottery system opens between February 1st and March 15th, with reservations announced by the end of April. More information on permits and reservations is available at www.fs.usda.gov.

Lone Pine Lake is excellent for those wanting a taste of the Mt. Whitney Trail but who don't want to bite off a 22-mile hike or can't obtain a permit. The route begins at the same trailhead and shares the same path for approximately 2.7 miles before reaching the Lone Pine Lake spur.

Permits are required for hiking past this spur trail, but anyone is welcome up to the lake. And this high-alpine lake is very much worthy of a leisurely day hike. Its aquamarine waters reflect the surrounding Sierra Nevada Mountains for a surreal alpine scene.

The Alabama Hills are a unique collection of rocks and eroded hills just outside of Lone Pine. Hollywood movies of past and present have captured the dramatic nature of this high-desert landscape. A few recently featured films include Gladiator, Iron Man, and Django Unchained. And while it always looks good on screen, exploring the Alabama Hills is even better.

Dirt roads and unmarked hiking trails line the area, punctuated by notable rock formations. One of the first sights to see, Nightmare Rock, greets visitors to the Alabama Hills with a painted-on face. It's approximately three miles up the Whitney Portal Road from Lone Pine. Here, a right turn onto Movie Flat Road leads into the core of the Alabama Hills.

It's a choose-your-own-adventure when visiting Alabama Hills. Common ways to get around include hiking, mountain biking, and horseback riding. One of the few signed trails leads to the area's most prominent feature: the Mobius Arch. Other points of interest include Lathe Arch, Heart Arch, and Lone Ranger Canyon.

The Eastern Sierra Interagency Visitor Center is the first place to visit when planning adventures in the region. Local, state, and federal agencies operate the facility and offer vital resources like trail beta and permits. The visitor center also provides a wealth of interpretive information about the natural landscapes.

If anything, the visitor center is just a fun place to hang out. The surrounding landscape defines the high-desert allure of Lone Pine, including a great view of Mt. Whitney. Shade structures around the facility offer respite from the heat and a cool place to congregate.

The visitor center is south of town at the junction of Highway 395 and State Route 136. It's the only place to pick up permits for the Mt. Whitney Trail in person and a place to go for any questions about the route. It's also a valuable resource for planning a trip into the nearby Death Valley National Park.

5. Scout Locations at the Museum of Western Film History

On the south side of town, the Museum of Western Film History celebrates the region's prominence in Hollywood movies. The backdrop of hundreds of movies and TV shows have featured the alluring landscapes of the area. The museum pays homage to these landscapes with movie props and displays of the actors who made them famous.

Over 40 ongoing exhibits compose the museum's collection. Things on display including movie posters, authentic set decor, and costumes. There's so much to catch the eye in these detail-orientated displays, it's easy to spend a few hours slowly perusing.

The bulk of the collection relates to the hundreds of old western movies shot in places like Death Valley and the Alabama Hills. But the museum also has a handful of exhibits regarding more-modern movies shot at these locations - with new productions expected in the future.

The museum also hosts the celebrated Lone Pine Film Festival every October. This four-day event screens a preview of the 400-plus movies filmed in the area, ranging from classic westerns to more contemporary pieces. The festival often sells out all the hotel rooms in town.

The Mobius Arch is the best-known attraction in the Alabama Hills. It's the only rock feature with a designated trail. And with only a 0.6-mile loop leading to this magnificent display of erosion, it's a quick must-visit when sightseeing around the area.

The trail to Mobius Arch is relatively flat with minimal elevation gain. Scenery abounds in every direction, including the Sierra Nevadas dominating the horizon to the west. Mt. Whitney itself is perfectly framed in the arch upon arrival, making for a popular picture opportunity.

No road signs help navigate to the marked Mobius Arch Trailhead. To arrive at the trailhead from Lone Pine, take the Whitney Portal for approximately three miles until reaching Movie Flat Road. After taking a right turn on Movie Flat Road and driving for 1.6 miles, the trailhead is immediately on the right fork of a junction in the road.

In 1942, not even a full year after the attack on Pearl Harbor, the American government relocated 120,000 Japanese Americans to military compounds across the West. One of these compounds, Manzanar, is less than a 15-minute drive south of Lone Pine.

This important National Historic Site highlights a dark moment of U.S. history. It respectively pays tribute by painting an authentic picture of what conditions were like at the camp. Manzanar was one of 10 such camps across the West Coast. A visitor center at the site is the first place to visit for more context of the site's history.

Death Valley National Park, one of the largest national parks in the lower 48, is less than an hour's drive southeast of Lone Pine. The park provides a stark contrast to the Sierra Nevada Mountains to the west.

Because of its proximity, both day and overnight trips into Death Valley are popular from Lone Pine. Some of the park's signature areas are directly on Highway 190 heading out from town. And the arid environment comes into big view while descending this route over 4,000 feet into the park.

A few popular areas to visit in Death Valley include Mesquite Flat Sand Dunes, Zabriskie Point, and the Devil's Golf Course. Badwater Basin is another must-visit area, home to the lowest elevation in North America at a startling 282 feet below sea level. Stovepipe Wells and Furnace Creek are two of the most popular campgrounds when coming from Lone Pine.

The park is also home to some of the hottest temperatures ever recorded and extreme summer heat. Visiting the park in the summer months is highly discouraged. Instead, October through April is the prime season to visit Death Valley.

9. Fulfill a Hiker's Appetite at a Local Restaurant

There's nothing quite like a satisfying meal after a big hike. Lone Pine exemplifies this fact with several local restaurants. With a full-time population of approximately 1,800 residents, the town feeds tens of thousands of mouths each year. It's the steady influx of mountain climbers and desert explorers that create such an appetite throughout the city.

Nearly all restaurants in Lone Pine border Main Street in the center of town. Some of the first eateries to catch the eye are the Alabama Hills Cafe and Bakery and the Mt. Whitney Restaurant. These two casual restaurants offer quintessential American entrees like flapjacks and burgers. The Whitney Portal Store is also well known for two-handed hamburgers.

For broader menus in Lone Pine, places like Season's Restaurant and The Grill offer entree items like pasta, steak, and seafood. And for more international flavor, Merry Go Round restaurant is a popular spot for traditional and casual Chinese meals.

Anglers have the opportunity to cast lines year-round from Lone Pine. The town is in the southern part of Inyo County, which offers a pre-season start for trout fishing. This elongated season stretches from early March through October. And several other select bodies of water are open to fishing throughout the year.

A popular spot to cast a line, Diaz Lake is three miles south of town along the highway. It is the headquarters for the Southern Inyo Early Opener Trout Derby that takes place opening day weekend. This Trout Derby is also the only time motorized boats are allowed on the water.

Backcountry fishing in the Inyo National Forest and Golden Trout Wilderness is also a popular means of angling throughout the summer. Other spots closer to town to cast a line include Independence Creek, the Whitney Portal Pond, and Cottonwood Creek.

One of the most popular ways to spend the night near Lone Pine is pitching a tent or parking an RV. Visitors have a wide range of camping options to select. Sites range from primitive hike-in campgrounds to standard electric sites in the shade.

The Bureau of Land Management also operates the popular Tuttle Creek Campground. With over 80 non-hookup sites available, it's a popular but not usually filled-to-the-brim spot for tents and RVs. 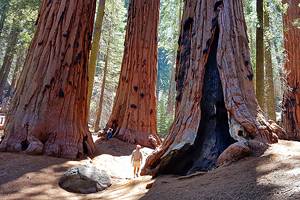 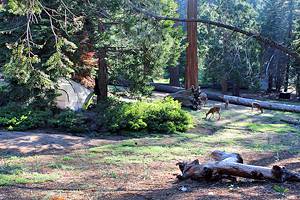 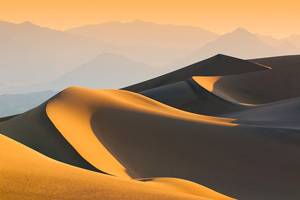 16 Top Attractions & Things to Do in Death Valley, CA 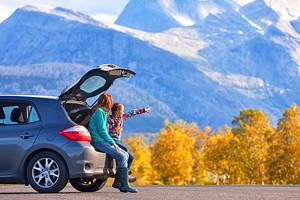 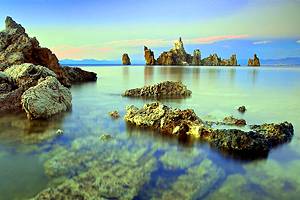 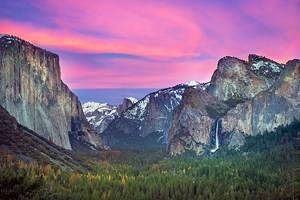 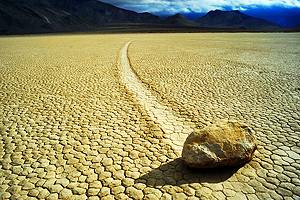 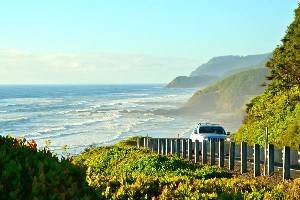 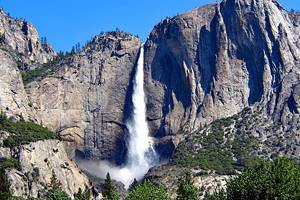 15 Cheap Weekend Getaways in the USA 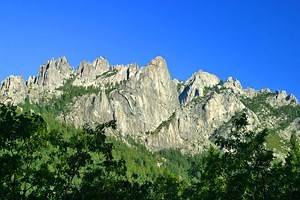