A fusion of natural and urban worlds, Stanley Park is Vancouver's premier park and home to some of the city's popular tourist attractions. It sits at the western tip of the Downtown peninsula, within walking distance of office towers and shopping. This proximity to the city makes Stanley Park's giant centuries-old red cedar and Douglas fir trees all the more lovely.

Today, the park is one of Vancouver's top attractions. Forested paths crisscross the park, leading to scenic views, several key sites, and restaurants. But the most popular route is undoubtedly the seawall – a waterfront walking, jogging, and biking path that rims Stanley Park.

It's best to start out with a plan before going to the park, as parking can sometimes be a challenge.

Begin with our list of the top things to do in Stanley Park.

See also: Where to Stay near Stanley Park

1. Bike or Walk the Seawall

Many visitors choose to bike the seawall as the quickest way to circumnavigate the large and lovely park. It's a roughly ten-kilometer loop, starting in Coal Harbour and encircling the peninsula by way of Brockton Point, the Lions Gate Bridge, Third Beach, Second Beach, and Lost Lagoon.

Not sure where to begin? Consider taking a guided Stanley Park bike tour and hit the highlights with a small group of riders.

One splendid view follows another. The Stanley Park seawall is always a popular place (and especially so on summer weekends), and consequently there are lanes so walkers don't need to worry about being run over by bikers.

Historic stops lie along the entire length of the seawall route. The Nine O'Clock Gun blasts the twilight hour each night, the Brockton Point Lighthouse guides ships through First Narrows, and the replica figurehead from the Canadian Pacific Line's Empress of Japan commemorates a grand ocean-going ship.

Favorite photo stops include the Vancouver's equivalent of the Copenhagen Mermaid - Girl in a Wetsuit, the totem poles at Brockton Point, and Siwash Rock.

The collection of totem poles and carvings at Brockton Point represents First Nations cultures from throughout British Columbia. The display began about a century ago in the park, but the original poles have since been replicated and the weathered heritage carvings preserved in local museums.

The totems are located near Brockton Oval, within sight of the seawall. Also in the Brockton Point area, small Deadman's Island is an important First Nations landmark that's now a naval base and off-limits to the public.

In the heart of Stanley Park, the internationally renowned Vancouver Aquarium features over 50,000 animals, including many species of Pacific sea life. The playful sea otters are particularly captivating, and other sea mammals such as dolphins, belugas, and sea lions attract large audiences.

The Discover Rays Touch Pool exhibit is one of the most popular things to do in the aquarium. Free-roaming animals can be found in the rainforest-like Graham Amazon Gallery, a walk-through experience.

The aquarium has animal shows each day, including sea lions, penguins, sea turtles, and even frog feedings.

4. Hike among the Towering Trees

Stanley Park has some of Vancouver's best preserved forest, and the best way to experience these huge old fir, cedar, hemlock, and spruce trees is to go for a walk underneath them. As you stroll along the level bark-covered trails, the silence of the forest will envelope you. Wildlife abounds in the cool shadows – don't be surprised to see deer, fox, rabbits, and a wide assortment of birdlife.

Although the park was logged in the late 19th century, some of the trees were too huge at that time to be harvested and were spared. These so called "monument trees" are found on Siwash Trail, Third Beach Trail, and Lake Trail (north of Beaver Lake). Most are estimated to be 400-450 years old.

The one-way scenic drive around Stanley Park begins from West Georgia Street and is a great way to get a quick overview of the park. Pullouts and parking lots are positioned at all attractions, including the totem poles at Brockton Point and the lookout at Prospect Point.

The view at Prospect Point is particularly beautiful, taking in the North Shore Mountains and busy Lions Gate Bridge. It also has a certain drama, being the highest point in Stanley Park.

All major sightseeing tour companies cover the scenic drive to introduce the park. Bus tours are a regular in the park (usually stopping at the totem poles and Prospect Point), and there are also horse-drawn wagon tours that loop around Brockton Point.

A family-friendly destination, Second Beach rates as a favorite for its large outdoor pool, sandy stretch, extensive playground area, and proximity to English Bay in the West End.

Sand dredged from False Creek was used to build up the beach, and on summer weekends, the area can be very busy. A number of other fun things to do are nearby, including an 18-hole pitch-and-putt golf course, park walking trails, and public tennis courts.

Near the tennis courts, great blue herons gather to nest each spring - their wide nests and gawky silhouettes an interesting sight in the bare-branches of the trees.

Prior to construction of the road through Stanley Park, marshy Lost Lagoon virtually dried out at low water and became part of Coal Harbour at high tide. But the construction of the causeway and Lions Gate Bridge changed the landscape to create a permanent water source, and today it's home to a large number of waterfowl.

Canada geese, swans, and ducks clearly enjoy being fed, even if the practice is discouraged. Be especially mindful of the swans; they tend to try and take fingers, along with any treat you might be offering! On the shores of the body of water, the Stanley Park Nature House on Lost Lagoon displays natural history exhibits and especially welcomes families.

This is another of Vancouver's lovely beaches, entrancing seawall cyclists and families with its natural sands and scenic vistas. The Stanley Park forest screens the beach from the city, and it feels more private than many other city beaches. The water is shallow and somewhat protected from the waves when the wind is out of the north due to a rock seawall extending into the ocean.

This is also one of the best sunset-watching locations in the city and an evening picnic is highly recommended.

The walk to attractive Beaver Lake (so-called because it has been home to a beaver colony) is well worth the effort and introduces a different side to the park.

In summer, the lake, the only natural freshwater lake in Stanley Park, is a mass of variously colored water lilies. Waterfowl, Douglas squirrels, and waterfowl are usually quick to approach visitors. From the lake, trails fan out into the western and eastern halves of the park.

Be sure to walk north of the lake along the Lake Trail; some of the trees in this area are absolutely massive and over 400 years old.

When it was built a century ago, the wooden pavilion in Stanley Park housed park administration. Today, it is used as a wedding venue, and the restaurant called Stanley's serves up West Coast fare. The pavilion is handy to the Malkin Bowl outdoor performance venue, a lovely Rose Garden, and park trails.

The on-site restaurant, Stanley's, boasts of having the largest patio in the park. And what a patio it is! Incredible views out over manicured lawns are coupled with fresh and tasty local favorites served in a convivial atmosphere. Be sure to try the fish and chips created with Pacific cod, or for a more terrestrial option, consider the House Burger featuring Wagyu beef.

The narrow-gauge Miniature Train is one of the most popular things to do in Stanley Park for families. More than 200,000 people ride it each year.

The narrow gauge railway follows a two-kilometer loop track that passes through the forest, tunnels, and over small trestle bridges. The entire ride takes approximately 15 minutes and is a perfect family adventure.

If the weather is inclement, the train will not operate.

This hollow, western red cedar is estimated to be about 800 years old, and makes an easy walk from Third Beach or Siwash Rock. Though the tree is dead, it is a local favorite and families have long gathered in the park to have a photograph snapped with the famous conifer.

Indeed, when the tree was in danger of falling down after a particularly severe windstorm, locals raised thousands of dollars to add in metal supports and save the park icon.

Once a military station, Ferguson Point is now a destination for scenic panoramas and dining. The Teahouse restaurant at Ferguson Point, formerly the CO's quarters, is a favorite on account of its views.

The outdoor patio is perfect on warm summer days, and the indoor dining room has windows all across the front that overlook the ocean. From this perfect perch, you can watch the ships come and go from Vancouver harbor and, if you are lucky, perhaps spot a pod of orcas.

This is a good place to park the car. From the point, it's possible to walk to many of the park's attractions and beaches.

Beauty abounds in Stanley Park, and in no place is it more evident than the three showcase gardens in the park: the Rose Garden, the Ted & Mary Grieg Rhododendron Garden, and the gardens at Prospect Point.

Timing is critical if you want to see two of the gardens at their best. April and May are the best time to see the rhododendrons and azaleas, when these bushy low trees put forth the most amazing blooms in pink and white.

The rose gardens come into their own in June and July with a kaleidoscope of colors and beguiling aromas.

Don't worry if you are outside of those times. The bedding plants at Prospect Point are always a sight to behold throughout the spring into the fall.

Where to Stay near Stanley Park for Sightseeing

We recommend these highly-rated hotels near Vancouver's beautiful Stanley Park:

22 Top-Rated Things to Do in Vancouver, BC 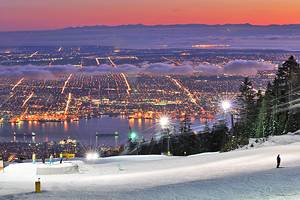 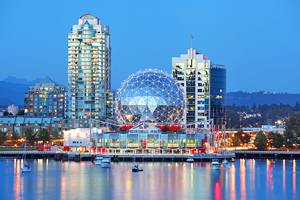 From Vancouver to Victoria: 5 Best Ways to Get There 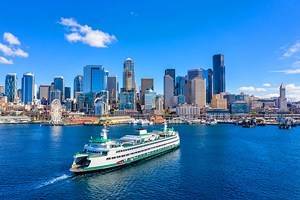 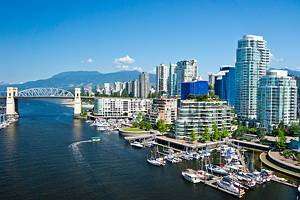 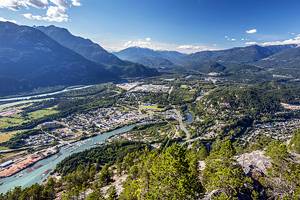 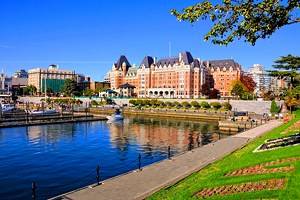 11 Best Weekend Getaways from Vancouver, BC 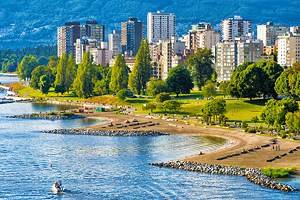 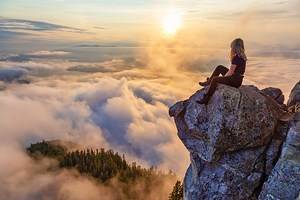 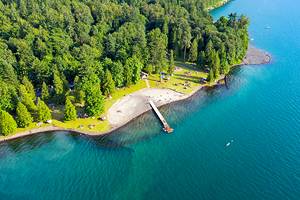 13 Best Campgrounds near Vancouver, BC 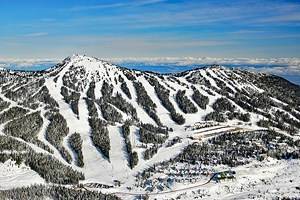 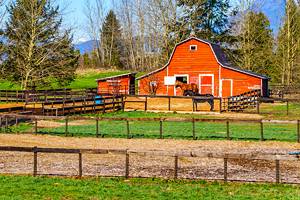