Helsingborg, strategically situated at the narrowest part of the Oresund strait and opposite the Danish town of Helsingor (Elsinore), was for centuries hotly disputed between Denmark and Sweden. It's now a busy port, a commercial and industrial town, and a favored center for conferences and trade fairs. It's also Sweden's main channel of communication by sea with Denmark and mainland Europe.

While the port itself has been somewhat eclipsed since the building of Oresund Bridge, which links Sweden and Denmark, it is still worth exploring. The historic town has many attractions, including old houses; stone churches; narrow alleyways to wander through, and the Kärnan fortress, which has guarded the town for more than six centuries.

Helsingborg is also known for its lively dining scene, and its many restaurants serve everything from Asian and European cuisine to scrumptious Swedish specialties.

To learn more about this exciting Swedish tourist destination, read through our list of the top attractions and fun things to do in Helsingborg.

See also: Where to Stay in Helsingborg

1. Visit the City's Most Famous Landmark: Kärnan (The Kernel)

Immediately apparent to tourists arriving by sea is the town's emblem and landmark, the "Kernel," or Kärnan. This conspicuous brick tower stands 35 meters high and occupies the upper end of the long market square (Stortorget). At the end of the square, two towers frame a broad flight of steps that lead up to Konung Oscar II's Terrass, where the old medieval defensive tower stands.

Originally part of a Danish fortress, it was built in the 1300s as the central feature of a stronghold that was itself erected on the site of an even earlier timber fortress, probably dating from the 10th century. The rest of the castle was destroyed in 1680, leaving only the tower standing.

From the top — a climb of 190 steps — you can enjoy superb views of the town and over the Oresund to Denmark. Beyond Kärnan is Slottshagen, a beautiful park with a sculpture by Christian Eriksson, The Hunt, as well as the remains of the old fortress.

Fredriksdal Open-Air Museum & Botanical Garden (Friluftsmuseum) is a must-see attraction for all the family and a journey back through the centuries. You can stroll around and experience a real working Skåne farm, along with numerous old yet well-preserved countryside houses and outbuildings. Other highlights include the old 18th-century Fredriksdal Mansion, a Music Museum, a Botanic Garden, Grafiska Print Museum, and an open-air theater.

Kids will love all the farm animals, and in the old town quarter, you can buy traditional sweets or even roses in the flower shop. In essence, Fredriksdal is the rural Skåne of old, spread across 360,000 square meters of an utterly unique setting. Food and drink concessions are located on-site, as is a well-stocked giftshop.

Located about five kilometers north of Helsingborg, Sofiero Castle (Sofiero slott) lies in one of Europe's most beautiful parks, boasting a truly regal history. Built in the 19th century, it once served as a summer getaway for Swedish royalty. In the spring and summer, the flower and kitchen gardens are simply magnificent, and you can enjoy informative exhibitions and a variety of exciting events and activities here.

The castle holds particular appeal for children, as they can take part in activities such as gardening and storytelling. Imaginative and safe play areas are on hand for all ages, and colorful blooms, such as rhododendrons and dahlias, provide beautiful photo opportunities. Guided tours are available in English. A restaurant and café are located on the premises and offer a variety of seasonal dining experiences, including the always popular Christmas dinner.

4. See the Animals at Tropikariet

Visiting this wonderful indoor zoo is one of the most popular things to do in Helsingborg for animal lovers and families with children. Tropikariet's relatively nondescript exterior belies the fun adventures that await inside. Exotic animals including lemurs, monkeys, meerkats, bats, and birds are just some of the creatures in this recreated tropical rainforest, and a small aquarium displays sharks and a coral reef.

Unlike many other zoos, the exhibits here have few barriers; bats and birds fly freely around, and for an extra fee, you can hold a snake or crocodile, touch a shark, or feed a lemur. Rain or shine, this fun attraction allows you to immerse yourself in another world. After all your animal adventures, stop by Café Masai Mara for refreshments and snacks. Guided tours are also available.

At the lower end of Stortorget, Helsingborg's attractive neo-Gothic town hall (Helsingborgs rådhus) dates from 1870 and is one of the city's most eye-catching landmarks. The building features a 65-meter-high tower and stained-glass windows depicting events in the history of the town. Guided tours are available.

In front of the town hall are Norwegian and Danish memorial stones, commemorating the assistance given by Sweden when these countries were occupied by the Germans during the Second World War, and opposite is the well-known statue of the Swedish General Count Magnus Stenbock (1664-1717)

Filled with art galleries and special exhibitions, the Dunker Culture House (Dunkers Kulturhus) hosts international music, theater, dance, and cultural activities for young people. Inside is a restaurant, bistro, and the Helsingborg Tourist Information Center, so this is a good place to visit for information about the town and area.

A multimedia exhibit provides an interesting overview of the town's history, and in the Reading Room you can browse through journals and books on diverse topics, including theater, music, history, art, archaeology, architecture, and film. The restaurant offers great views out over Öresund.

The pretty Gothic church of St. Mary's Church (Mariakyrkan) is one of Helsingborg's oldest buildings. It dates from the 12th century, when it was built in the Romanesque style, and was renovated in the 15th century in Gothic style.

Swedish places of worship are noted for their simplicity both internally and externally. However, notable features of the interior here are the elaborate reredos (c. 1450); the pulpit dating from 1615, with intarsia decoration; a historical chart from AD 900 to modern times; and the beautiful stained glass.

8. Take a Day Trip to Helsingor

Helsingborg lies only four kilometers across the Øresund strait from the medieval Danish city of Helsingor, so it's easy to squeeze a day trip to Denmark into your itinerary. You can take your car on the ferry or travel on foot, and the total journey is only about 20 minutes.

Situated between Drottninggatan and Kungsgatan, you'll find the Concert Hall (Konserthuset). Designed by Sven Markelius in 1932, the building is one of the finest examples of Swedish functionalism and has been declared a historic structure.

The hall is known for its particularly fine acoustics and is home to the Helsingborg Symphony Orchestra (HSO). Lovers of classical music should check out the varied program on offer.

Located in the old town quarter of Fredriksdal Open-Air Museum, Grafiska is the largest working print museum in Scandinavia. This is a sure-fire stop on a tour of Helsingborg for lovers of the printed word. Inaugurated in 1995, the museum's mission is to preserve the proud craft and history of printing in the Skåne area. More than 50 volunteers demonstrate the workings of printing presses dating back hundreds of years.

Where to Stay in Helsingborg for Sightseeing

Most of Helsingborg's hotels are mid-range properties clustered around the city center near many of the top attractions, and this is the most convenient place to stay.

A mere four kilometers across the Oresund strait from the Danish city of Helsingor, Helsingborg is not the only Swedish city close to its European neighbor. About 65 kilometers south lies multicultural Malmö, where the iconic Oresund Bridge connects Sweden to Denmark. North of Malmö, Gothenburg is also relatively close to Denmark and has a distinctly European feel.

Any trip to Sweden should also include a visit to the beautiful capital, Stockholm, often called "the Venice of the North" thanks to its many waterways. From here, you can explore some exciting destinations in the surrounding countryside on fun day trips, including the medieval university town of Uppsala. Only a 35-minute flight away from Stockholm, the beautiful island of Gotland attracts many vacationing Swedes and international visitors alike. 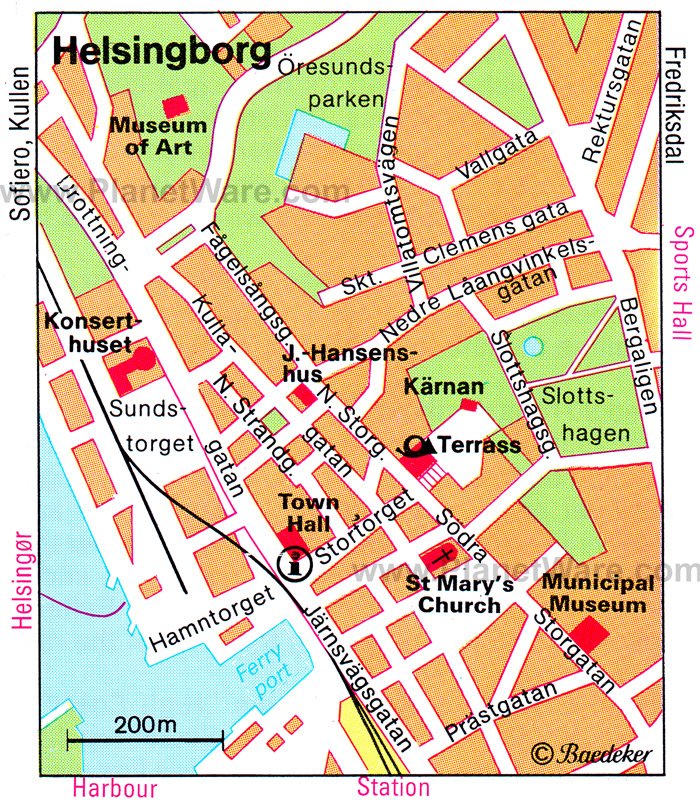 Salmon Fishing on Lake Michigan: Things You Need to Know
BE INSPIRED