Denmark's second largest city, Aarhus (or Århus) lies on the east coast of Jutland, where the river Aarhus Å flows into picturesque Aarhus Bay. First mentioned in AD 928 as the see of a Bishop, it received its municipal charter in 1441, and throughout the Middle Ages, served as an important commercial, seafaring, and fishing center — a tradition that lives on due to the area's popularity among sports anglers.

The wealth generated by merchants is clear today in the many well-preserved Renaissance buildings you'll see as you explore the city.

To find an even earlier era, stroll through Klostergade, Volden, and Borggade in the Latin Quarter, a neighborhood that replaced the old Viking fortifications in the late 14th century. But this quarter is far from frozen in time; today it's a lively enclave, with boutiques, cafés, and restaurants lining its narrow stone-paved streets.

An important cultural center with an outstanding fine arts museum, Aarhus is known for its vibrant music scene, which embraces folk, jazz, chamber music, operatic performances, and concerts in churches.

To make sure you find all the best places to visit and things to do, follow our list of the top tourist attractions in Aarhus.

See also: Where to Stay in Aarhus

The Old Town (Den Gamle By) is an open-air museum consisting of more than 75 historic buildings collected from across Denmark, dismantled, and reassembled in Aarhus for preservation. Dating from the 16th to the early 20th century, this remarkable collection has been assembled as if it really was an authentic old town, an effect enhanced by the superb old houses, shops, workshops, and windmills.

Highlights include the old Burgomaster's house from 1597, home to a fine collection of furniture; as well as a merchant's house; a stilt-house; a two-storied stone house; and a storehouse. The largest building is the majestic Coin Master's Mansion, a newer "old" addition erected on the site in 2009.

A toy museum, textile museum, and historical musical collection are also worth seeing as is the bicycle museum; apothecary's shop (complete with healing herbs); and the workshops once belonging to candlemakers, coopers, and shoemakers. The museum also holds special exhibitions of historical costumes.

The ARoS Aarhus Kunstmuseum, one of the largest art museums in Europe, is housed in an impressive 10-story building that is itself a work of art.

The museum's most remarkable architectural work of art is Your Rainbow panorama, a circular walkway surrounded in glass in a spectrum of colors, created by Danish-Icelandic artist, Olafur Eliasson. Mounted on columns 3.5 meters above the roof, the walkway is 150 meters long and three meters wide. As you walk around it, you'll get views of the city and bay in rainbow colors. You can access Your Rainbow through the 310-square-meter Roof Pavilion.

Highlights of the Kunstmuseum collections are artwork from the Danish Golden Age (1770 to 1900), Danish Modernism (1900 to the 1960s), and contemporary art. Works span all genres and mediums, including sculpture and installations.

Afterwards, stick around for a little sustenance at the on-site café or restaurant, and take in a show, a lecture, or a guided tour.

A short drive south of Aarhus is the superb new Moesgård Museum. Built on the grounds of the Moesgård manor house, where the original museum was housed, this well-designed attraction opened in the autumn of 2014 and offers a comprehensive account of Denmark's history from the Stone Age to Viking times.

A particularly popular attraction is the Grauballe Man (Grauballemann), a body dating back more than 2,000 years that was found perfectly preserved in a nearby bog. In the open-air section of the museum is a fun Prehistoric Trail (Oldtidssti) through the woods and fields of the estate, passing replicas of prehistoric houses and burial mounds.

The inner city of Aarhus consists of a semi-circle enclosed by a ring road (Ringgade), and at its heart lies the Great Market (Store Torv) in which stands Aarhus Cathedral (Sankt Clemens Kirke), dedicated to St. Clement.

While the original structure was begun in the 12th century, the current church dates largely from the early 1500s, with some Romanesque features still found in the external walls (the chapels on the east side of the transepts also date from this time). The present façade with its single tower and anchor motif dates from the same period.

Highlights of the beautifully bright interior include the winged altar from 1497 with its rich array of figures, along with the beautifully carved 16th-century pulpit, two organs, and a font. The vault paintings date from the 15th century and portray St. Clement as the patron saint of the church and Christ sitting in judgment.

In the basement of a large bank, the Viking Museum (Vikingemuseet) consists of collections based upon the discoveries made by builders when excavating the bank's foundations in the 1960s. The museum paints a fascinating picture of the Viking community that made Aarhus its home some thousand or more years ago.

Highlights are remains of the ramparts that once surrounded the settlement, a reconstruction of a typical house from the Viking period, and ancient tools.

Try to plan your visit to coincide with the famous Viking Moot at Moesgård Beach event, a fascinating weekend in July that attracts would-be Vikings from across Europe to share in the culture and lore of this fascinating period of Danish history. The festivities feature battle reenactments and displays of horsemanship, along with traditional Viking boat building and sailing displays.

Aarhus Botanical Garden (Botanisk Have) was founded in 1875 and covers an impressive 53 acres. Highlights are the large hothouses with subtropical plants from around the world, recently renovated with the addition of a large tropical dome. Here, plant collections from all over the world can be grown in four different climate zones.

Kids have fun here in the summer, when they can find plenty of things to do, including special children's programs, and concerts and shows in the garden's amphitheater.

The gardens are a pleasant place for a stroll or a picnic, with numerous paths, two small lakes, and plenty of open green space.

Kids are guaranteed to have fun at Tivoli Friheden, a theme park only two kilometers from the center of Aarhus and within walking distance from Marselisborg forest. Its more than 40 attractions include themed rides, games, playgrounds, and a 5D Cinemagic cinema.

There are restaurants and vendors as well, and the park is also a venue for concerts featuring Danish and international artists. Holiday festivals bring new themes and decorations for Halloween and especially Christmas, when the lights display is spectacular.

Marselisborg Palace (Marselisborg Slot), built in 1902 as a gift from the Danish people, has since been the summer residence of Danish royalty.

While the palace itself isn't open to the public, the surrounding gardens and parklands are. Highlights of a visit to this 32-acre park are its large lawns with their many sculptures and ponds, as well as flourishing rose and herb gardens.

When the queen and her family are in residence, the Changing of the Guard takes place at noon every day, and it's a spectacle that's worth seeing.

Also of interest is the nearby Memorial Park (Marselisborg Mindepark), laid out in memory of the Danes who fell in World War I.

On the south side of busy Rådhus Plads stands the City Hall (Rådhus), built in 1941 to plans by architects Arne Jacobsen and Erik Moller and one of the few such municipal buildings ever built in Denmark.

Faced with Norwegian marble, the highlight of the building is its stunning 60-meter-high tower with fine views of the city and bay. Interior tours include a visit to the Civic Hall, the Council Chamber, and the Marriage Room, each beautifully designed and edged in sumptuous wood trim and accents.

Look for the nearby Pig Fountain, or Grisebronden (it's nicer looking than it sounds), and at the foot of the City Hall tower is a lovely fountain called Agnes and the Water Carrier.

Founded in 1982, the Women's Museum (Kvindemuseet) in Aarhus is a unique organization designed to gather and preserve information pertaining to the lives of the country's women and their role in society and culture.

Although its primary orientation is toward research, the museum has historical and topical exhibits that reflect such themes as women's roles in the workplace, women at home, and their role in the arts.

The collections include such diverse artifacts as wedding dresses, household equipment, paintings, handcrafts, cooking utensils, home decoration, and other objects that have been part of women's daily lives.

The exhibits also explore the changing attitudes of society over the centuries. These and the archive of documents, photos, and biographies documenting women's lives and work explore the evolving changes in women's lives.

Built between the 13th and 15th centuries, the Church of Our Lady (Vor Frue Kirke) was originally part of a Dominican priory and remains one of the largest churches in Denmark. Now a purely Gothic building, it contains many fine frescoes and a magnificent altarpiece dating from 1520.

An even older church was discovered during excavations in 1955. Dating to the mid-11th century, this little stone church has been carefully restored and can be seen when visiting the Church of Our Lady. Also of interest is the Chapterhouse, dedicated as a church and notable for its medieval wall paintings.

Where to Stay in Aarhus for Sightseeing

We recommend these great hotels in Aarhus with easy access to the top places to see in the city center:

While there's no shortage of things to see and do in Aarhus, two especially interesting tourist attractions are outside the city. Rosenholm Castle is a lovely 16th-century Renaissance building that's been owned by the same family for more than 400 years. Highlights include its many beautifully furnished rooms decorated with paintings and tapestries, as well as a lake and Renaissance pavilion in the park.

Another historic attraction worth seeing is the famous church in Thorsager, Jutland's only surviving Round Church. Parts of this two-story building date from the early 13th century. The upper story is accessed by an old winding staircase and was once used as a gallery for local nobility. 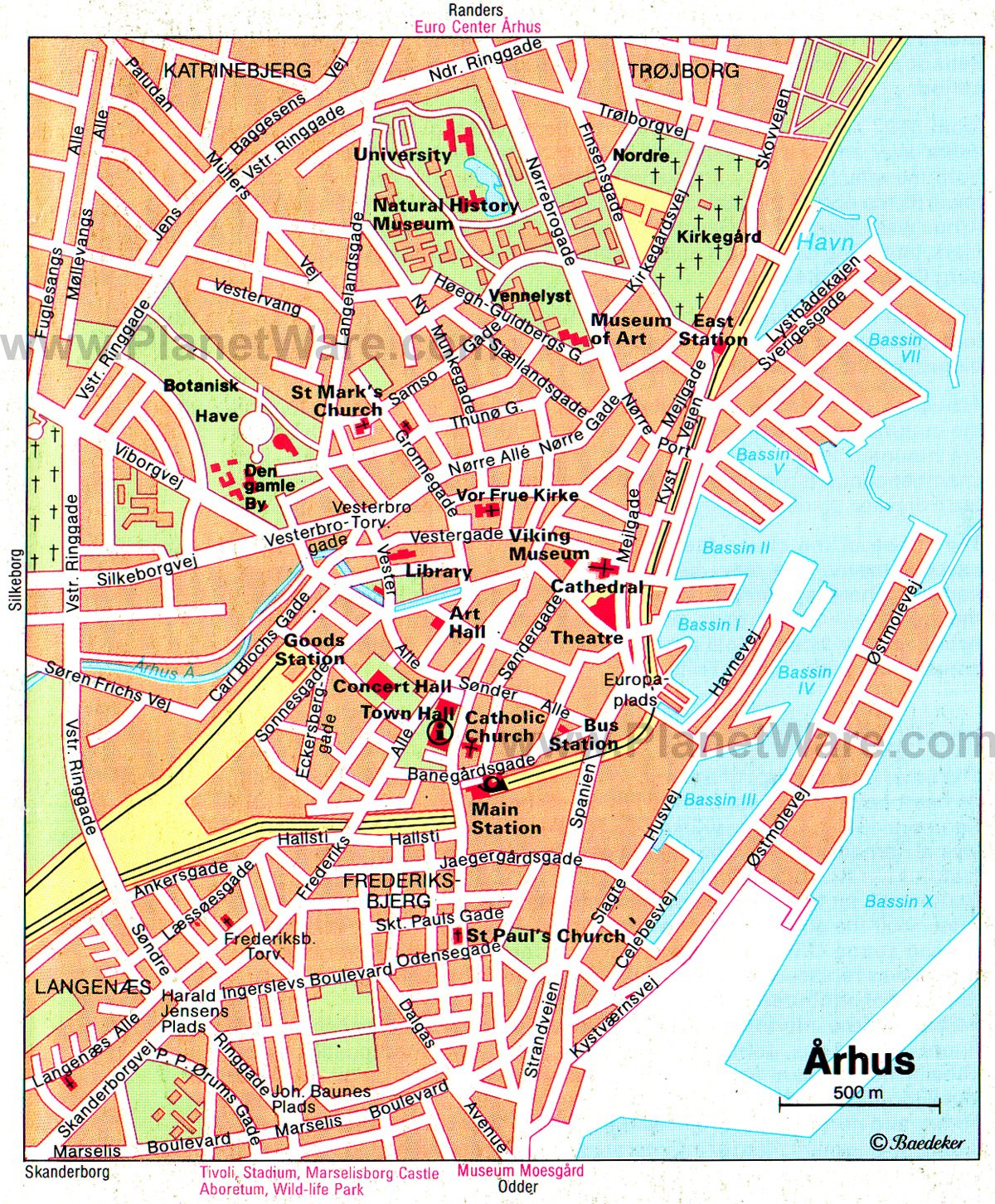