About 70 kilometers northwest of Stockholm, and just 25 minutes drive from Arlanda Airport, is the picturesque medieval university city of Uppsala. Coupled with the air of academia, Uppsala has a laid-back feel that comes as part and parcel of a large and diverse student population.

Bicycles are everywhere, and the many waterways and parks add to an overall sense of tranquility. Often, it's hard to remember you're in Sweden's fourth largest city, particularly if you're meandering through the winding streets of the Old Town. Here, you'll discover plenty of quaint shops, cafés, and restaurants, as well as many of Uppsala's must-see tourist attractions.

Boasting a magnificent 13th-century cathedral, Uppsala lays claim to city status while retaining the feel of a town. The river Fyris (Fyrisån) neatly bisects the city and can be explored aboard a fun cruise (dinner cruise options are available). The historic old town lies to the west of the river, and the commercial modern town to the east. If you lose your bearings, simply look out for the cathedral, which can be seen from almost anywhere.

Uppsala was home to the Swedish kings of old, and 16th-century king Gustav Vasa lies interred in the cathedral, as does 18th-century botanist Carl Linnaeus. An incredible history dating back to Viking times, and the spirit of learning remain at Uppsala's heart. To learn more about this vibrant city, read through our list of the top tourist attractions and fun things to do in Uppsala.

See also: Where to Stay in Uppsala

Built around 1270 and consecrated in 1435, magnificent Uppsala Cathedral (Uppsala domkyrka) is the city's most distinctive landmark. It has evolved and been altered numerous times throughout the centuries, including a major renovation between 1885 and 1893 in neo-Gothic style. This extensive remodeling involved the addition of its twin tall-pointed spires, stained-glass windows, and beautiful murals.

Note the sumptuous Baroque pulpit, carved in 1707 by Burchard Precht to the design of Nicodemus Tessin the Younger.

At the east end of the choir are the burial chapel and tomb of King Gustavus Adolphus, dating from 1576. Also buried in the cathedral are Carl von Linné (Linnaeus), Archbishop Nathan Söderblom, and the philosopher Emanuel Swedenborg.

In the Silver Chamber, among other treasures, you'll find the gilded reliquary of King Eric IX (St. Eric), who was killed by the Danes in 1160. A gold brocade robe (c. 1400) that belonged to Queen Margaret, ruler of the united kingdoms of Denmark, Norway, and Sweden, tops the collection in the north tower.

English language tours are available, and attending mass or one of the regular choral concerts or organ recitals held here is a wonderful way to soak up the rich historic ambience. A café and shop are located on-site.

Accommodation: Where to Stay in Uppsala

Funded in 1620 by Gustavus Adolphus, the Gustavianum - Uppsala University Museum is located opposite the city's cathedral and is the former main building of Uppsala University. It contains the university's cultural history collections, along with its Nordic and Egyptian antiquities. It's also where you'll find the unique Anatomical Theatre, built on the roof in the 1660s.

Permanent exhibitions include Viking relics, such as priceless jewelry, medals, and swords, along with the history of Uppsala University and a number of Egyptian mummies. Temporary exhibitions round out the museum's offerings. The spectacular University Art Collection in the main building is also well worth exploring.

To walk through the historic Uppsala University (Uppsala universitet) is to steep oneself in the illustrious world of Swedish academia. The so-called "new" university buildings were constructed in sumptuous Roman-Renaissance style between 1879 and 1886.

Grandeur is the order of the day, with the magnificent foyer leading to the grand auditorium and festival hall, which seats around 1,800 people. Portraits featuring royalty, distinguished university professors, and cultural figures adorn the walls. A must-see is the Museum of Evolution, which includes dinosaurs discovered in China.

Be sure to also visit the University Library (Carolina Rediviva), the largest in Sweden, housing in excess of 5,000,000 volumes and more than 30,000 manuscripts. The library's greatest treasure, and on permanent exhibition, is the world famous Codex Argenteus (Silver Bible), most likely dating from the 6th century. Guided tours of the university are available.

Overlooking the city, Uppsala Castle (Uppsala slott) is the official residence of the County Governor and boasts a rich history. Many of the events that shaped Sweden took place here. In 1567, a deranged and paranoid King Eric XIV ordered the execution of a group of noblemen in what became known as the Sture murders.

In 1654, the shocking abdication of Queen Kristina, as famously played by Greta Garbo in the Hollywood movie of the same name (although anglicised to Queen Christina), was announced in the Rikshallen (Hall of State).

Inside are the impressive art exhibitions of the Uppsala Konstmuseum (Art Museum), and you can enjoy breathtaking views over Uppsala and the surrounding countryside from the battlements. Outside, you can stroll around the walking paths and explore the Botanical Gardens opposite the castle.

5. Visit the Vikings of Old at Gamla Uppsala

Roughly four kilometers north of Uppsala lies Gamla Uppsala (Old Uppsala), where the land of the Vikings awaits. Spread across the landscape are more than 300 burial mounds, the last resting place of Viking Kings, Queens, and heroes of old. When Christianity took hold in the 12th century, Gamla Uppsala eventually boasted a cathedral on the site where the ancient church (Gamla Uppsala Kyrka) now stands.

Legends aplenty are to be found here, and the Gamla Uppsala Museum (Riksantikvarieämbetet Gamla) is a must before further exploration. If you're interested in history and archaeology, the four-kilometer bus journey, or six-kilometer "Pilgrim's Walk" from the cathedral (Domkyrka), is well worth the effort.

Gamla Uppsala Museum (Riksantikvarieämbetet Gamla) is a must-visit museum that's in perfect harmony with its surroundings, its dome shape reflecting the Viking burial mounds dotted across the landscape. Here, you can learn of Viking myths, legends, and culture, while viewing fascinating artifacts uncovered from the surrounding archaeological site.

The excellent timeline is a great way of getting to grips with this particular slice of Nordic history, and its eventual demise with the establishment of Christianity in the 12th century. This is an attraction for all the family and well worth a short bus ride from Uppsala town center. English-language guided tours can be booked in advance.

From the Stora Torg, Svartbäcksgatan runs northwest to the Linnaeus Garden (Linnéträdgården), which was curated by world famous botanist Carl Linnaeus (Carl von Linné). Here, you'll find the museum, which was once his home.

Throughout the house are exhibitions dedicated to Linnaeus' scientific achievements as well as personal belongings, mementos, furniture, and household items gathered over a lifetime. Run since 1937 by the Linnaeus Society, this is a wonderfully maintained shrine to Linnaeus, his life, and the extraordinary time of enlightenment and discovery in which he lived. Make sure to leave time for a stroll through the magnificent gardens.

Steps away from the cathedral, the attractive Holy Trinity Church (Helga Trefaldighets Kyrka) was inaugurated in 1302. Although this is a medieval place of worship, the pulpit, pews, and three stained-glass windows in the chancel date from 1904 to 1905 when substantial renovations took place.

Drawing visitors from across the globe are the murals, dating back to the Middle Ages, many of which are by the famous medieval painter, Albertus Pictor (Albert the Painter). Although German by birth, Pictor settled in Sweden where his work became renowned and much in demand throughout the country.

Few nations do outdoor living as well as the Swedes. Indeed, they tend to live outdoors as much as possible once the brilliant Scandinavian sunshine dismisses the grey of winter. Uppsala's City Park (Stadsträdgården) was developed in the late 19th century and is a tranquil oasis in which to unwind.

Take a stroll through the trees; settle in for a picnic; stop to admire the magnificent flowers, which bloom through spring and summer; or preferably do all three. In the midst of a lily pond is the "Island of Bliss" (Lycksalighetens ö), where visitors can take the weight off and admire the replica of botanist Carl Linnaeus' work table and chair. There's plenty for families to enjoy, such as a playground, summer café, and open-air theater.

Housed in an old mill and dating from the 1760s, Uppland County Museum (Upplandsmuseet) provides insights into the culture, craftsmanship, and history that shaped this unique part of Sweden. The mill is also famous for being featured in the 1982 Ingmar Bergman movie Fanny and Alexander.

The museum dates from 1909 and houses a wide range of permanent and temporary exhibitions such as photography, arts and crafts, music, and folklore. Facilities include a children's corner, café, and gift shop.

The quirky, colorful, and utterly unique works of modernist sculptor and painter Bror Hjorth (1894-1968) pop out at you in this charming museum. Opened to the public in 1978, the museum is Hjorth's former home and studio, where he lived out his final decades.

The sculptures, paintings, drawings, and sketches here comprise the largest collection of his works and reflect his strong roots in folk art. Temporary exhibitions are on display in a new wing. After admiring all the artwork, you can purchase a coffee in the cafe and relax in the gardens.

If you're a fan of his art, check out his six-meter-high statue, Näckens polska, outside Uppsala Central Station, which features a young couple dancing among flowers while Näcken plays his fiddle.

12. Take a Day Trip to Sigtuna

Located on the shore of Lake Mälaren, in the Uppland, about a 30-minute drive from Uppsala, the quaint village of Sigtuna provides a picture-postcard look at a typical Swedish village. Sigtuna is Sweden's oldest surviving town, and you can see rune stones and the remains of ancient churches around town.

Popular things to do here include browsing the boutiques and craft shops at Stora Gatan, strolling along the Sigtuna Boardwalk, and exploring old Viking sites and the ruins of St. Olaf's Church.

Where to Stay in Uppsala for Sightseeing

Uppsala's top attractions lie predominantly in the city center, within walking distance of each other, and this is the best place to stay. As is typical in Sweden, most hotels are mid-range in price.

Uppsala is just one of many popular day trips from Stockholm, the vibrant capital of Sweden. Hop on a 35-minute flight from the capital, and you can relax on the charming island of Gotland, a much-loved Swedish holiday destination. Along Sweden's west coast, cities such as Gothenburg, Helsingborg, and Malmo offer easy access to neighboring Denmark, across the Oresund strait. 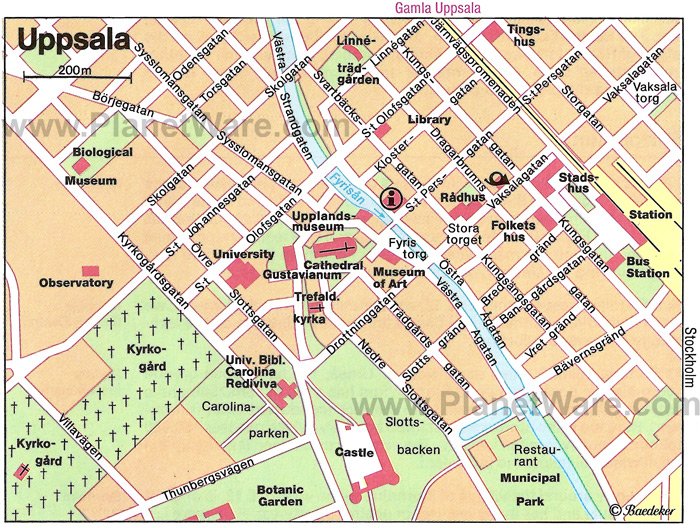 11 Top-Rated Attractions & Things to Do in Helsingor
Recent Articles