The picturesque old market town of St. Albans in Hertfordshire lies on a hill above the left bank of the River Ver. The town attracts particular interest because of its 14th-century Abbey Gateway, part of the large Benedictine Monastery at St. Albans that once dominated the town.

Also historic is the old Roman settlement of Verulamium, the first formalized Roman municipality in Britain. The town, in fact, owes its name to St. Alban, a Roman mercenary, who was converted to Christianity and suffered a martyr's death in AD 304.

In addition to visiting the tourist attractions associated with the town's rich history, there are many other fun things to do here. Those who enjoy shopping flock to the Christopher Place Shopping Centre, just a short walk from the cathedral, while the Maltings Mall offers a theater and numerous dining options.

Sports enthusiasts are well catered to as well, with numerous hiking and biking trails crisscrossing the city and the surrounding area. Traditionally popular activities like cricket, rugby, and football are all available to do here, too.

A good place to visit for those who enjoy water-based activities is nearby Stanborough Lakes, a 126-acre water park with excellent sailing and rowing.

For more about these and other great places to visit in St. Albans, be sure to review our list of the top tourist attractions in this often overlooked corner of England.

See also: Where to Stay in St. Albans

St. Albans Cathedral — officially referred to as the Cathedral and Abbey Church of Saint Alban — sits on the oldest site of continuous Christian worship in Britain. Alban, the first martyr, was buried here after giving his life for his faith more than 1,700 years ago. Built in 1077, the cathedral boasts a total length of 556 feet, making it second in size only to Winchester Cathedral.

Inside the west entrance are a few bays in early English style, with five more on the south side of the nave. Remains of 13th-century frescoes, including a notable depiction of the crucifixion, are on the columns flanking the north side.

A beautiful wooden coffered ceiling spans the lay chancel, separated from the nave by a 14th-century rood screen. The large gatehouse on the south wall, the Abbey Gateway, was built in 1361 and is all that remains of the former monastery.

Other features of note include the Monks' Chancel, roofed by ribbed vaulting featuring painted ornamental stucco dating from 1461, and the altar wall at the east end, with its many fine statues.

The Saint's Chapel (1315) houses the tomb of St. Alban, while the tomb of St. Amphibalus, who converted St. Alban to Christianity, is on the north wall of the gallery. A cathedral shop and café are located on the premises, and free guided tours are available.

2. The Old Town and the Medieval Clock Tower

Standing in the center of the old town of St. Albans is the Clock Tower, built in 1405. Today it provides fine panoramic views across the many historic streets of the old town and the surrounding countryside. This fun 93-step climb is available weekends only, spring to fall, so plan your visit accordingly (it's well worth it).

The bustling town center is also the setting for the Market Place, known for its shopping and bustling weekly street market, a tradition that can trace its roots as far back as the 9th century. Also worth visiting is the majestic Town Hall, built in 1829 and notable for its imposing Palladian façade.

If there's time in your St. Albans itinerary, check out Britain's oldest inn, Ye Olde Fighting Cocks Inn. Built in 1539 and located just across the river, the building's foundations date from AD 793, and tunnels once ran between the cathedral and the inn's cellars.

Settlement on the site of Verulamium — the third largest Roman city in Britain — arose in around AD 40 and was the first formal Roman "municipium," or municipality, in the country.

Finds from various archeological digs are displayed in the adjoining Verulamium Museum and range from collections of gold coins to mosaics and wall plasters. A highlight of a visit is the chance to wander recreations of a number of Roman rooms.

Also in Verulamium Park and just a short walk away is the Roman Theatre, the only visible example of its kind in Britain. Linked to two temples, the theater was used for religious festivals, armed combat, and wild animal shows. Nearby is the Hypocaust, a remarkable piece of Romana engineering designed to heat buildings.

Built on the site of the ancient Roman forum in Verulamium and near St. Albans' Clock Tower stands the trim St. Michael's Church. Its Norman nave contains the tomb of philosopher Francis Bacon (1561-1626), also commemorated here by a monument (tours are available). It's believed the site was also where Saint Alban was put on trial before his execution.

The picturesque 16th-century Kingsbury Water Mill (now a restaurant) is nearby, on the banks of the River Ver, and makes a scenic photo opportunity.

The International Organ Festival and competition takes place every two years in early July (odd-numbered years only). Events include orchestral, choral, and chamber concerts, as well as recitals, art exhibitions, and lectures.

The repertoire ranges from traditional to contemporary, and visitors can catch performances in the St. Albans Cathedral, local churches, and St. Albans School. The cathedral's impressive Harrison & Harrison organ, built in 1963, serves as the centerpiece of the festival.

Sundays are a particularly good time to visit — the whole day is filled with music as each organ is put through its paces in performance. Christmas is a great time to visit, but book ahead to avoid disappointment.

Be sure to visit this fascinating attraction's website for news of upcoming events and concerts.

Old Gorhambury House is a great place to visit if you fancy a drive into the countryside. Just an easy 10-minute drive west of St. Albans, you'll be rewarded with the chance to explore the remains of a huge Elizabethan mansion built in 1563 by Sir Nicholas Bacon, Queen Elizabeth I's Lord Keeper of the Great Seal.

The once-grand ruins include a two-story porch with parts of the hall, chapel, and clock tower to view. The pleasant estate grounds are fun to explore. Admission is free.

Operating with a mandate to preserve Britain's first aviation collection, the de Havilland Aircraft Museum in the quaint village of London Colney is well-worth a visit. Highlights include displays of a variety of aircraft, aero-engines, propellers, missiles, rockets, and memorabilia made by one of the country's oldest aircraft manufacturers.

Among the attraction's collection is a unique Mosquito prototype, the only surviving early example of one of WWII's most versatile and successful fighting aircraft. Other highlights are numerous hands-on displays and vintage flight simulators.

A well-stocked shop is located on-site and sells memorabilia, models, and books related to de Havilland.

Where to Stay in St. Albans for Sightseeing

We recommend these great hotels in St. Albans, each just a short hop from popular attractions like St. Albans Cathedral: 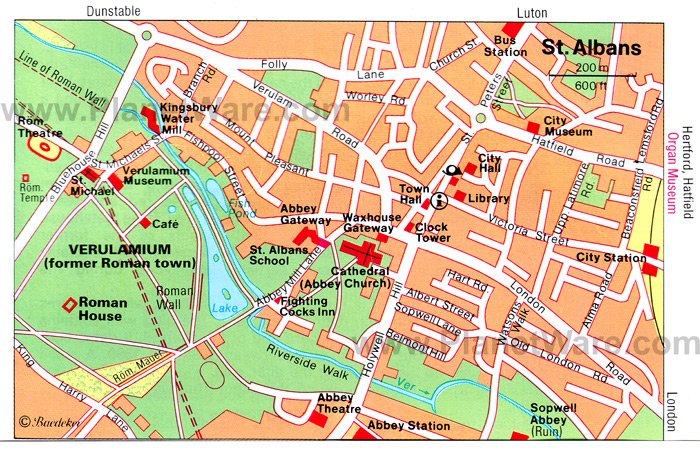