Written by Shandley McMurray
Updated Oct 27, 2022
We may earn a commission from affiliate links ()

Orlando and Miami are the two most famous and highly visited cities in Florida. Their incredible differences (one boasts theme parks, the other has sandy beaches) entice visitors to travel between the two in order to gain a full Florida experience. But what's the best way to get from Orlando to Miami?

Landlocked Orlando lies 235 miles north of Miami, a distance easily covered by car. If the traffic gods are smiling upon you, the journey will take just over three and a half hours. If you choose to go by bus, you'll have to tack on about an hour to your trip, or you can hop on a plane and arrive in less than an hour and a half.

Other travel options include a transfer tour, day tour, or train trip. To decide which method is best for you, use our list of the best ways to get from Orlando to Miami.

1. From Orlando to Miami by Car

Driving is the easiest and second cheapest way to get from Orlando to Miami. With over 235 miles to cover, you'll likely only have to fill up once along your journey, or not at all if you're driving an electric vehicle. If you're lucky enough to avoid traffic, expect a three-hour-and-40-minute journey. If not, you could be sitting on the interstate for over five hours. We suggest avoiding rush hour and holidays to speed up your trip.

The easiest, straightest route involves following the Florida Turnpike. Be warned, this is a toll road, so you'll be looking at fees that climb even higher without a SunPass. If you're renting a car, check with the rental company to see their policy on toll roads. You could be slapped with an extra charge in addition to the toll fee. It may be cheaper to buy your own pass.

Another driving option is the I-95 South. It, too, can rack up your fees, so be forewarned. The I-95 has dedicated toll lanes in certain sections. These SunPass lanes look exactly like every other lane except for the double dashes that separate them. They are similar to the carpool lane as well, so be extra vigilant when reading the signs. It is possible to travel on the I-95 without using the toll lanes, just stick to the right side.

If you aren't concerned about how long it takes you to get to Miami, try using a more scenic route. Take the I95 to West Palm, then drive through downtown until you cross the bridge to reach the A1A at Palm Beach.

Dubbed one of the prettiest roads in Florida, the A1A passes by gargantuan beachfront homes that will have you drooling with envy.

You can take this all the way to Fort Lauderdale, where the traffic will increase dramatically, and you'll have to jut away from the water to take Route 1 (a.k.a. Federal Highway) until you can rejoin the A1A at Dania Beach, or transfer to the I95 at Fort Lauderdale.

US441 (a.k.a. S State Road 7 and NW 7th Avenue) is a much slower route involving multiple traffic lights, and if you've ever been to Florida, you'll know that they have super long traffic lights. You can take this part of the way to Miami to avoid tolls.

2. From Orlando to Miami by Bus

The cheapest way to get to Miami is by bus. Thankfully, it's not the slowest.

Greyhound runs from the Greyhound station at N John Young Parkway to the main Miami Bus Station at Miami International Airport. The average time is four hours and 40 minutes, and tickets are reasonably priced, especially during the off season. If you don't opt for a direct route, you could be looking at anywhere from 6 to over 10 and a half hours with a transfer and stops in Fort Pierce and Fort Lauderdale.

Megabus runs from The Florida Mall on Orange Blossom Trail in Orlando to the Miami Intermodal Center near the airport. Book early and reserve one of the 20 most popular seats, which feature either panoramic views, more space, or a table. All seats have an individual power outlet.

Economy, business, and first class are offered on Red Coach buses. Travelers can sit back, relax, and let someone else guide them to their destination. Choose the first class option if you're looking for more leg room, your own charging port, free Wi-Fi, and a seat that reclines 140 degrees.

The trip will take about four hours, depending on traffic. Orlando boasts two Red Coach stations, the headquarters at 1777 McCoy Road, and another on the University of Central Florida campus. They, too, travel to Miami Airport.

Regardless of which company you choose, you'll have to find another way to reach your final destination from the airport. Rent a car; use a car service; or hop on the Miami Beach Airport Express, a bus that runs from the Miami International Airport Metrorail Station along Collins and Washington Avenues, stopping at various points on Mid Beach and South Beach.

3. From Orlando to Miami by Plane

This is the most expensive travel option between Orlando and Miami, but at an hour and 12 minutes direct, it's also the fastest way to travel to Miami. Unless you travel off-season, that is. Depending when you're going and which airline you choose, you may have to transfer somewhere like Atlanta, which really doesn't make sense.

Looking to fly in style? Book a trip with Linear Air. This private air charter company offers guests an option to fly privately in everything from a small, four-seater aircraft to a large, 15-seater jet. The price can set you back anywhere between four and five figures, depending whether you opt for a small air taxi or a large private jet. Pack the plane with your friends and family to lower your personal cost.

4. From Orlando to Miami by a Transfer Tour

Booking a transfer tour from Orlando to Miami helps take the pressure out of planning your vacation. Perfect for those who stress over renting cars and driving them through unfamiliar cities, these tours infuse some aah into your holiday.

Why worry about fighting traffic on the I95 or finding your way through busy streets when you can leave the driving to someone else? Each shuttle bus departs from International Drive and drops its passengers at one of multiple stops in Miami including the airport and Bayside Marketplace downtown.

The journey is about four hours, depending on traffic, and guests can bring two pieces of luggage.

5. From Orlando to Miami by Day Tour

Booking a Miami Day Tour is a hassle-free way to enjoy Florida's most popular city without having to fork out the cash for a hotel room. See the city's most exciting sights, like Bayside Marketplace; the Art Deco district; and South Beach, one of the best beaches in Miami.

The tour picks up and returns travelers to various hotels in the Orlando area. Lasting about 16 hours, this is the longest way to get to Miami, but it's also the best way to see Miami on a day trip.

Breakfast is included with your ticket, but you'll have to pay for your own lunch and snacks along the way. For an additional fee, guests can sail around Biscayne Bay to see the opulent mansions from the water.

6. From Orlando to Miami by Train

Amtrak offers service from Orlando to Miami in five hours and 35 minutes. Tickets are quite reasonable, especially if you travel off-season. The cost goes up if you decide to splurge on a room. Each room comes complete with beds, towels, a private restroom and shower and free meals. Speaking of food, there's a café car offering snacks, drinks, and light meals.

Take a taxi to the historic Orlando Amtrak Station at 1400 Sligh Blvd to catch your train. Built in 1926, this station services Amtrak's Silver Meteor and Silver Star runs, which travel from New York to Miami in nearly 28 hours including multiple stops along the way.

You'll arrive at the Miami Amtrak Station at 8303 NW 37th Avenue, which lies just north of Miami in Hialeah, a bit far from the main drag. You'll need to hail a cab or walk to the nearby Tri-Rail and Metrorail Stations to board a local train farther into the city. Check with your hotel before you go, as some offer free shuttle rides to and from the train station.

Another option is to disembark at Hollywood Station and purchase a ticket for the Tri-Rail train to Miami Airport. If your hotel offers a free shuttle bus to the airport, which many do, you could then board the shuttle for a free transfer to the hotel. 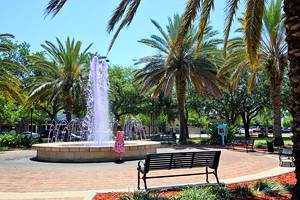 12 Best Things to Do in Winter Haven, FL 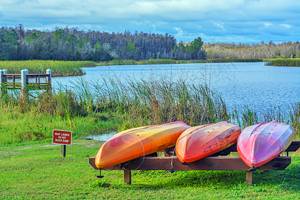 12 Best Things to Do in Lakeland, FL 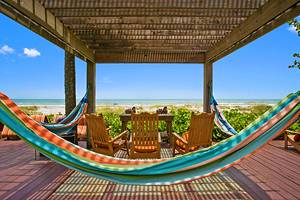 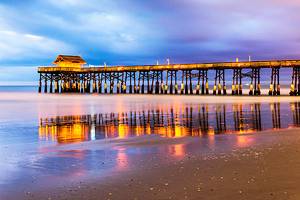 14 Top-Rated Attractions & Things to Do in Cocoa Beach, FL 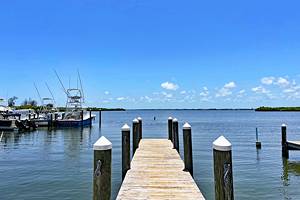 12 Best Things to Do in Melbourne, FL 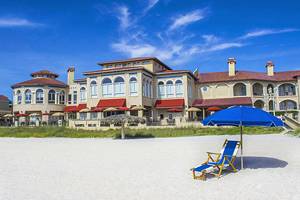 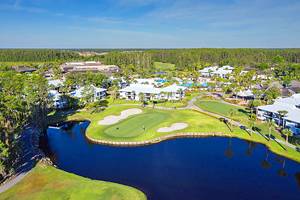