One of the largest states in America by land size, Montana, is also one of the least populated. Amid the state's wide-open spaces, cities in Montana offer a change of pace from the great outdoors. These cultural beacons shine with a rugged Western history shared throughout the state.

Some cities in Montana started from an interest in underground resources. Whether copper or gold, the resulting mining booms across Montana helped grow the state, and its towns, into what they are today. Other cities have expanded thanks to the academic appeal of state universities. These college towns entice students from across the world to major in some Montana adventures.

Big mountains and wild rivers are at the backdoor of all cities in Montana. In a state renowned for trout fishing and crowning mountaintops, its cities cater to outdoor recreation big and small. Rugged national forests are found near any Montana metropolitan area. Two world-famous national parks, Yellowstone and Glacier, are also within driving distance.

Set your sights on some new landscapes with our list of the best cities in Montana.

In western Montana near the Idaho border, Missoula is an adventurous university city with an artistic spirit. Several national forests and prominent Rocky Mountain ranges surround Missoula. The city is often regarded for its excellent fly fishing – made more famous by the 1976 novel A River Runs Through It.

The outdoors speaks for itself in Missoula. Mount Sentinel, part of the Sapphire Mountains, provides a prominent backdrop to the city. The Clark Fork River runs along the northern flank of Mount Sentinel and through the city's heart. A paved pedestrian path runs along the river and is the main non-motorized commuter corridor of the city.

The large letter "M" affixed to the face of Mount Sentinel relates to the University of Montana at its base. The university offers excellent programs in creative writing and wildlife studies. U of M also adds a youthful spirit to Missoula's population. Sporting events like Grizzly football games and lecture series tend to attract more than just students to campus.

Adventure stems from Missoula in every direction. At least five different national forests are within an hour's drive from the city. Lolo National Forest, specifically, surrounds Missoula. Places like Rattlesnake and Pattee Canyon National Recreation Areas are within a 15-minute drive. Many Missoulians opt for a bike ride to the trailhead instead.

The youthful and artistic side of Missoula also shines in the streets. Downtown and other areas, like the Hip Strip, offer local shops and restaurants, and a plethora of community events. Shows at the Wilma Theatre are often one of the highlights of visiting Missoula.

For more cultural flavor, the city's First Friday celebrations occur throughout the streets at the beginning of each month.

Accommodation: Where to Stay in Missoula

Montana's capital city, Helena, was born from a gold strike in 1864. Prospectors struck big at Last Chance Gulch and brought prosperity to the area for years to come. Helena grew from the mining camps surrounding the gulch, and the city became the capital of the Montana Territory in 1875.

Helena survived the usual bust of most gold towns by establishing ties with the railroad industry. Its growing influence in state politics also paved the path for Helena to continue prospering after Last Chance Gulch dried up.

Today, much of Helena's gold rush history still rings throughout the historic heart of the city. A quaint and bustling downtown district has grown around Last Chance Gulch. Historical artifacts remain, like a restored Pioneers Cabin and row houses in Reeder's Alley. Historical walking tours are available through the Helena Visitor Information Center.

For more of the state's history and affairs, the Montana State Capitol offers lovely grounds to explore. The Greek-style exterior with a lady "Liberty" perched atop makes for an eye-catching institution. But the real artwork is within the interior of the State Capitol. Several murals, statues, and a rich rotunda filled with paintings tell Montana's story within this stately space.

For more eye-catching architecture, the city is also home to the Cathedral of St. Helena. This magnificent place of worship also has a long history as one of the top attractions of Helena.

It's not just the history of Helena that turns visitors into residents every year. The city's access to the outdoors is almost unrivaled in the state.

The South Hills of the city connect downtown with over 80 miles of trails to traverse. Mt. Helena City Park is an excellent place to begin exploring the foothills. Beyond this trail network, Helena National Forest is right at the backdoor, with thousands of acres to explore.

Accommodation: Where to Stay in Helena

Bozeman earns many accolades as one of the best places to live in the U.S. – and for a good reason. The city is an outlet for every type of Montana adventure. Fly fishing, mountain biking, backpacking, peak bagging, and hot springing are available at the backdoor of this university city.

Making up the beautiful backdrop behind Bozeman, the Bridger Range offers an easy escape into the mountains. These mountains play a vital role in winter recreation, with places like Bridger Bowl laced with ski runs. Hikers, bikers, and equestrians make great use of the alpine environment throughout the rest of the year.

Bozeman is a gateway to the attractions of Yellowstone National Park. The Gardiner entrance to the park is an 80-mile drive through Paradise Valley from Bozeman. On the way to or from Yellowstone, a visit to the historic institution of Chico Hot Springs is worth the stop.

The city is also a basecamp for other big adventures in the area. The year-round mountain playground known as Big Sky Resort is within an hour's drive of the city. The three million acres of Custer-Gallatin National Forest are also easily accessed from Bozeman.

Much of Bozeman's culture stems from the campus of Montana State University on the southwest side of the city. Established in 1893, MSU is the state's largest university, and the campus is sprawling. A youthful culture emanates from the school and infuses downtown with nightlife, live music, and an aptitude for the arts.

The Museum of the Rockies (MOR) is another one of the many fun things to do in Bozeman. Exhibits at this Smithsonian Affiliate range from interstellar displays to a Living History Farm. The most prominent exhibit at MOR, the Siebel Dinosaur Complex, houses one of the world's largest dinosaur fossil collections.

Accommodation: Where to Stay in Bozeman

In Glacier Country of northwest Montana, some of the biggest attractions of the state surround Kalispell. One of the largest freshwater lakes in the nation, Flathead Lake, is south of the city. To the north, the powdery ski slopes of Whitefish Mountain Resort are a short drive away. So is Glacier National Park, a little farther north, aptly nicknamed the Crown of the Continent.

While the outdoors attracts a lot of attention, it's Kalispell's culture that keeps this city of 20,000 growing. Kalispell has an indisputable Western charm. From the historic buildings downtown to the tipping of Stetsons on the street, Kalispell's rugged hospitality adds to any visit.

Alongside the growing population, Kalispell has seen an infusion of art and community events. Museums like the Hockaday Museum of Art display the creative side of Kalispell. And events like The Glacier Symphony, Orchestra and Chorale offer a distinct taste of Glacier Country culture.

Accommodation: Where to Stay in Kalispell

In the heart of southwest Montana, Butte was once known as the Richest Hill on Earth. This moniker came about in the late 1800s as the copper mining business in Butte hit a significant boom. By the turn of the 1900s, Butte brought several cultures together to become one of the largest cities west of the Mississippi River.

Like any booming city, Butte hit a bust. The city remained a mining town until 1982, when the Berkeley Pit shut down. Revitalized mining efforts and timeless community action kept the city alive and doing well.

Butte has approximately 35,000 residents today. It's no longer copper that attracts crowds to Butte, but rather it's the historical ambience and easy access to nature.

Butte features one of the largest National Historic Landmark Districts in the country. These designated streets, buildings, and markers total into the thousands in Butte, each representing a layer of the city's prosperous past. One of the best ways to take in the history is on a Butte Trolley Tour. These two-hour tours come with expert narration from a guide.

History is also experienced within the several museums of Butte. Mining is especially on display at places like the Mineral Museum or the World Museum of Mining. For an interesting perspective on the Chinese immigrants that made history in Butte, the Mai Wah Museum is in the heart of the city's once-thriving Chinatown.

Montana adventures are easy to find in Butte. Activities like backpacking, fishing, and skiing run rampant throughout the national forests that surround the city. The Continental Divide is outside Butte's backdoor and accessed via Homestake Pass. Along the Continental Divide, the 90-foot Our Lady of the Rockies overlooks the city from its high vantage point.

Accommodation: Where to Stay in Butte

Billings is Montana's largest city, with over 100,000 residents. Overcrowding isn't an issue, though, and this city, deemed "Montana's Trailhead," delivers with wide-open space to explore. The most defining feature of Billings is the magnificent sandstone cliffs that divide the city – better known as the Rimrocks.

Another prominent feature and source of recreation in Billings is the Yellowstone River. As the last free-flowing river in the lower 48, this wild waterway is teeming with scenic attractions. The river is also teeming with oversized trout, ripe for setting a hook. The Yellowstone River is the backbone of outdoor recreation in the city, having carved much of the surrounding scenery.

Other reasons to visit Billings include public gardens, riverfront parks, and historic homes. ZooMontana is also a family favorite. This accredited zoo cares for over 80 animals, many of which were no longer fit to live in the wild.

Accommodation: Where to Stay in Billings

On the Missouri River in central Montana, Great Falls offers an authentic Montana experience. The city is the third largest in the state, with nearly 60,000 residents. Despite the city's size, the friendly community makes visiting Great Falls feel like stepping into a small town.

One of the best ways to start exploring Great Falls is on the River's Edge Trail. This paved pedestrian path follows the Missouri River for nearly 60 miles with scenic views the entire way. This popular corridor also connects several other top attractions of Great Falls. A few notable natural spots on River's Edge Trail include Gibson Park and Giant Springs State Park.

The Lewis and Clark Interpretive Center is also accessible on River's Edge Trail. This interpretive center chronicles the journey of the Corps of Discovery within 25,000 square feet of exhibit space. Lewis and Clark spent generous time in Great Falls on their trip, leaving a legacy that is widely celebrated by the city.

Other cultural interests peak within the many museums of Great Falls. The C.M. Rusell Museum highlights the work of the most famous cowboy artists of the American West. Other museums in Great Falls include The History Museum, the Children's Museum of Montana, and the Paris Gibson Square Museum of Art.

Accommodation: Where to Stay in Great Falls 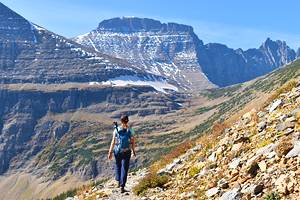