12 Top-Rated Attractions & Things to Do in Missoula

12 Top-Rated Attractions & Things to Do in Billings, MT

On the banks of the Yellowstone River in southern Montana, the attractions of Billings embody the western culture and wide open spaces of the American West. Backdropped by magnificent sandstone cliffs known as the Rimrocks, Billings is Montana's largest city, with over 100,000 residents. Far from crowded, though, Billings is known as Montana's Trailhead and is surrounded by Big Sky landscapes and public spaces that cater to hiking, mountain biking, and easily escaping into nature.

It's not just the rugged and wild scenery that makes Billings a popular destination of the region, an abundance of things to do draws visitors from across the state. Alongside numerous sidewalk patios and local shops, other popular downtown attractions include the Yellowstone Art Museum and the historic Alberta Bair Theater. Downtown is also the epicenter for big community celebrations, including parades, art walks, and a weekly "Alive After 5" concert series throughout the summer.

History still rings from the streets in Billings, especially at places like the nationally accredited Western Heritage Center or the artifact-filled Yellowstone County Museum. On the southwest side of downtown, the Moss Mansion, constructed in 1903, is one of the best-preserved examples of early development in Billings. For a much deeper historical perspective, the nearby caves at Pictograph Caves State Park are adorned with artwork over 2,000 years old.

For more ideas on how to spend your time here, read our list of the things to do Billings.

A defining geological feature of Billings, the long wall of sandstone cliffs that runs across the northern edge of town is a favorite spot for sightseeing, sunset watching, and in-city recreation.

Deposited by an ancient inland seaway and slowly carved over millions of years by the Yellowstone River, these scenic "rimrocks" are a striking backdrop. Numerous trailheads and parking areas are available to explore these outstanding symbols of the city.

A popular after-work escape, Zimmerman Park on the northwest side of town offers an easy way to catch a view atop the Rimrocks. Alongside scenic vantage points, Zimmerman Park is also a popular place to go mountain biking and trail running, and bolted climbing routes entice rock climbers to the area. Farther east, Swords Park and Phipps Park offer more Rimrock trails to explore. From atop the northern Rimrocks on clear days, visitors have a great view of the Yellowstone Valley, including the Beartooth Mountains.

On the east side of Billings, the newly expanded trail system at the Four Dances Special Recreation Management Area offers more cliffside views of the Yellowstone River. Primarily operated by the Bureau of Land Management, and only open to foot traffic, Four Dances provides interpretive information about the area and is arguably the best place to catch a blazing sunset in Billings. Visitors should be advised that rattlesnakes share the space with trail users at all Rimrock locations.

Constructed in 1903 and now on the National Register of Historic Places, the Moss Mansion was built for the entrepreneur Preston Boyd Moss and his family. Now a symbol of early history and development in Billings, the interior and many of the original furnishings and decorations of the home have been preserved.

Self-guided and docent-led tours of the mansion are available throughout the year, as well as annual celebrations, including the SpringFest artisans fair and Haunted Moss in autumn.

Accredited by the Association of Zoos & Aquariums, the non-profit ZooMontana is a unique facility. Not your typical zoo experience, ZooMontana features natural habitats and animals that are adapted to the region, including grizzly bears, gray wolves, and great horned owls. Many of the animals at ZooMontana were no longer fit to live in the wild and have been given a second chance at this zoo that has an emphasis on quality, not quantity, when it comes to animal care.

Natural barriers, including ravines and cliffs instead of cages and concrete walls, adds to the wildlife habitat feel of ZooMontana. The low price of admission makes ZooMontana very popular for family outings.

Families also tend to enjoy the special programs and events offered by ZooMontana, including hosted birthday parties and holiday events like Boo at the Zoo in October.

A scenic five-mile drive heading southeast from Billings, Pictograph Cave State Park encompasses 23 acres and three caves filled with archaeological wonder. Approximately 30,000 artifacts have been recovered from Pictograph, Middle, and Ghost Cave within the park, including a dense collection of over 100 cave paintings (some over 2,000 years old).

A less-than-a-mile interpretive trail connects all three caves at the park, and visitors are encouraged to bring binoculars to better enjoy the pictographs. Restrooms are available at the park.

In the downtown district of Billings, the Yellowstone Art Museum (YAM) primarily highlights artwork from the northern Rocky Mountain and Northern Plains regions. With a permanent collection of over 7,300 works, YAM features regularly rotating exhibits curated by local artists.

Alongside the colorful and eye-catching halls of the main museum, YAM also encourages visitors to check out the open-to-the-public Visible Vault where they store everything that isn't on display.

Visitors can enjoy YAM in numerous ways, including a self-guided tour throughout the facility. The museum also hosts an array of educational programs ranging from children's activities to adult education classes. Every First Friday of the month the museum features live entertainment and extended evening hours. Other events at the museum include Yoga at the Yam, an annual Art Auction, and YAM Free Days throughout the year.

One of Billings' best kept secrets, DanWalt Gardens is on the southeast side of the city and features beautiful gardens for the public to enjoy. With something new always in bloom between April and October, DanWalt Gardens proudly displays a collection of annuals, perennials, shrubs, and trees, as well as ornamental statues and hardscaping.

A popular place to have a contemplative moment in the day, DanWalt Gardens is also popular for bigger events and photo shoots, with reservable space available.

On the banks of the Yellowstone River, Riverfront Park provides a peaceful respite from the hustle and bustle of the city nearby. With reservable picnic pavilions, hiking trails, and plenty of parking, Riverfront Park is popular for family get-togethers and quick lunch breaks in nature. Much of the park is centered around Lake Josephine, with other activities like horseshoe pits and sand volleyball lining the shore.

Another popular public space can be found at Two Moon Park, which is managed by Yellowstone County Parks and located farther upstream on the Yellowstone River. The paved Dutcher Trail extends from Two Moon Park to the 13-acre Coulson Park.

Another public space near downtown that is popular with sports fans, Dehler Park features a multi-use stadium that is well utilized during the summer baseball season.

Preserving the stories and history of the Yellowstone River Valley and Northern High Plains, over 35,000 artifacts comprise the collection of this nationally accredited museum. Within the historic 1901 former Billings Library, the museum features regularly rotating displays ranging from indigenous cultural artifacts to wildlife and biology research.

Guests are encouraged to explore the exhibits on their own, and guided tours are available. The museum also hosts numerous community programs including a High Noon Lecture Series and historic walking tours.

Further insight into the history of the region is found at the Yellowstone County Museum near the Billings Logan International Airport. With over 5,000 square feet of display space, artifacts at the Yellowstone County Museum include pioneer wagons, rare firearms, and other objects of Montana's early settlement. The Ghost Dance exhibit at the museum features attire, instruments, and relics from indigenous cultures of the region.

Encompassing over 120 acres on the north side of Billings, within city limits, this state park is centered around the shores of Lake Elmo. Hiking the 1.2-mile trail around the lake is a popular thing to do at this state park, as is fishing from Roger's Pier, which extends over the water.

Playground equipment, a swimming beach, and picnic tables surround the lake, and on the west banks, a 200-acre off-leash dog park is popular with pet owners.

For sidewalk patio meals and unique local shopping opportunities, the downtown district of Billings continues to grow into a cultural hub of the Greater Yellowstone region. Cultural attractions like the Yellowstone Art Museum and the Western Heritage Center are located downtown, as well as performance venues like the historic and newly renovated Alberta Bair Theater, which is slated to reopen to the public in 2020.

Numerous other venues are scattered throughout downtown offering live performances in music and comedy, as well as book readings.

Downtown Billings also hosts numerous signature events of the city. Home to a festive St. Patrick's Day Parade, downtown also celebrates the fall season with an annual HarvestFest that features the finale of the summer's Farmers Market. A live music soundtrack is provided every Thursday in the summer with weekly Alive After 5 street fair celebrations, and ArtWalk Downtown occurs the last Friday of every other month. Regarded as the heart of downtown, Montana Avenue is a historic district with nightlife activities.

A big appeal of Billings is its proximity to prominent Montana landscapes, and one of the biggest landscapes in the state can be found with an approximately two-hour drive to Bighorn Canyon National Recreation Area. Centered around the 70-mile Bighorn Lake that straddles state lines between Montana and Wyoming, the magnificent canyon walls surrounding the lake offer a stunning view.

The world-famous Yellowstone National Park can be reached from Billings with an approximately four-hour drive. Filled with hydrothermal features, including fumaroles, hot springs, and geysers, Yellowstone has special designation as the country's first national park. The best hiking trails in Yellowstone are a good place to start exploring the two-million-acre park, and things to do like fly fishing and cross-country skiing are available throughout the year.

Offering an extremely scenic approach to Yellowstone from Billings, the Beartooth Highway is a National Scenic Byway that delivers visitors to the northeast entrance of the park. Spanning 68 miles from Red Lodge and seasonally open throughout the warmer months, the Beartooth Highway is truly a route not to be rushed through. Stunning vistas of the Absaroka and Beartooth Mountains rise along the drive, especially as drivers top the 10,947-foot Beartooth Pass. The scenic roadway is a popular snowmobile route during the winter.

More Cities in Montana: Two hours west of Billings, the university city of Bozeman also has major natural appeal near the border of the Custer Gallatin National Forest. On the western half of the state, the city of Missoula is a prominent stop along the I-90 corridor and includes access to wild and awesome places like the Bitterroot Mountains and the Rattlesnake National Recreation Area. For a great mountain getaway, the northern city of Whitefish features front door access to Whitefish Mountain Resort and Glacier National Park.

Exploring Yellowstone National Park: A four-hour drive from Billings, the two-million-plus-acre Yellowstone National Park offers amazing recreation activities through the year. While winter is predominantly focused on cross-country skiing, snowshoeing, and snowmobiling, the summer and shoulder months are particularly nice to explore some of the Best Hiking Trails in Yellowstone. For a place to spend the night and extend the trip, the Top-Rated Campgrounds in Yellowstone offer spacious tent sites and places to park an RV. 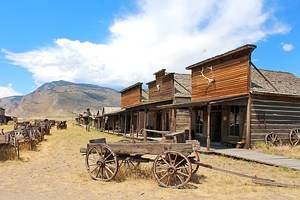 12 Top-Rated Attractions & Things to Do in Cody, WY 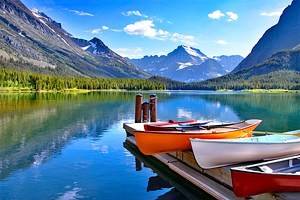 11 Top-Rated Places to Visit in Montana

10 Top-Rated Attractions & Things to Do in Bozeman, MT
Recent Articles

16 Most Beautiful Islands in the World
BE INSPIRED!
MORE PICTURES OF MONTANA