As a nation largely surrounded by water, it's not surprising that Italy has a number of islands. What does surprise, however, is their variety. Italy's islands range from Sicily and Sardinia, almost nations of their own in the Mediterranean, to tiny Isola Bella in Lake Maggiore, hardly big enough to support the palace and garden that cover it.

Between these two opposites are idyllic Capri, historic Elba of Napoleonic fame, Stromboli with its nightly tectonic fireworks, a clutch of varied islands in the Venetian lagoon, and several others worth visiting.

Whether you are looking for a deserted beach, a lively resort scene, a romantic hideaway, or a chance to explore mysterious prehistoric sites, you'll find the top places to go with this list of the best islands in Italy.

Always listed among the best places to visit in Italy, Sicily may seem more like a separate country. At nearly 10,000 square miles, roughly the same size as Luxembourg, it is the largest island in the Mediterranean.

Sicily certainly has enough tourist attractions to deserve a trip of its own, instead of a quick stop on a grand tour. With seven UNESCO World Heritage Sites – three ancient sites, two natural wonders, and two architectural landmarks – and more than its share of beautiful beaches, Sicily appeals to a variety of travelers.

Temples, amphitheaters, and villas from the ancient Greek and Roman civilizations are the finest ancient structures surviving: at Selinunte is one of the largest Greek temples; at Agrigento, one of the most perfectly preserved. The powdery white sands and crystal blue waters of San Vito Lo Capo rank it as one of Italy's best beaches.

Accommodation: Where to Stay in Sicily

With its own language and cultural traditions, even a unique cuisine, Sardinia seems even more distinct from the mainland than Sicily. If foreign tourists know of it at all, it's for the fabled white beaches and emerald waters of the Costa Smeralda, one of Europe's top summer resort destinations. Much of the island is bordered in golden sands, and the beaches of its southern and western coasts are just as spectacular.

More surprising to many is how quickly Sardinia's inland rises to soaring rugged mountains, hiding villages that seem out of a past century. Also surprising – to the delight of those interested in history's mysteries – are the hundreds of prehistoric sites, especially the round stone towers known as nuraghi that dot the island landscape.

Little is known about their origins, but many are so soundly constructed that you can explore passageways and climb spiral stairs that were built in the Bronze and Iron ages. More enigmatic megaliths and stone engravings add to the island's mysterious past. And you're never far from the beautiful sandy beaches.

A romantic aura surrounds the very name of this island in the Bay of Naples. Its high cliffs rise almost straight out of the water, with its most famous landmark hidden beneath them. The Blue Grotto is a sea cave that small boats can enter; inside reflected daylight turns the water a luminous blue.

Boat trips around the island reveal more caves, arches, and the signature rock formation of sea stacks on the south coast known as the Faraglioni.

The island's two towns, Capri and the higher Anacapri, have a holiday air, as tourists pour in on ferries from Naples and Sorrento.

Capri highlights, apart from the cafés and fashion boutiques, are the beautiful villa and gardens of San Michele, and the Giardini di Augusto (Gardens of Augustus) high on the cliffs overlooking the Marina Piccola and the Faraglioni.

Trails follow the coastline for spectacular views, or you can ride a chairlift to the summit of the highest peak for bird's-eye views of the entire island.

Although the city itself is connected by a causeway, Venice is made up of islands laced together by bridges or scattered throughout the lagoon. Four of the "detached" islands have particular appeal to tourists.

The long beach-lined Lido is Venice's playground and Europe's earliest beach resort, where royalty gathered at the grand hotels that still line its sands. Less glamorous today, it has a cheerful holiday vibe and some lovely Art Nouveau architecture. An afternoon at Lido is a popular thing to do for families visiting Venice with children.

Murano is the center of the famed Venetian glass, and its canal is lined with glassblowers' studios and shops selling their work and less artistic imported glass trinkets. Take the Vaporetto to watch the artists at work and visit the glass museum in the 17th-century Palazzo Giustinian to learn more about the glass blowers and the island's history.

A longer boat ride takes you to Burano, its canals lined by brightly painted houses. Its fame is for lace making, although much of what you see in its shops is imported and not hand made. To see the real thing, stop at the Scuola dei Merletti (lace school) and its small museum.

Close to Burano is Torcello, of interest for its history as the original site of Venice, as early as the seventh century. Little is left of the once flourishing town except its cathedral, dedicated in 639 and considered the best remaining example of Venetian-Byzantine architecture. The excellent mosaics date from as early as the 11th century.

Accommodation: Where to Stay in Venice: Best Areas & Hotels

Hot springs drew ancient Greeks and Romans to the island of Ischia, in the Bay of Naples, and tourists have appreciated its beaches and luxuriant gardens ever since. To find all three, head for Spiaggia Citara, where the elegant gardens of a high-end thermal spa overlook the beach. Or from the three-kilometer beach at Spiaggia dei Maronti, near the southern village of Sant'Angelo, you can access three open-air thermal pools.

Be prepared for crowded beaches in the summer, or take a water taxi to one of the secluded coves. From Forio, on the west coast, you can visit Giardini Ravino to see succulents and cacti or the stunning La Mortella, beautiful gardens created by Susana Walton and British composer Sir William Walton.

You can get to Ischia from Naples by ferry, and from either Naples or Ischia you can get a boat to the smaller – and less crowded – island of Procida.

Known to history buffs as the home of exiled Napoleon Bonaparte, Elba is best known to seekers of sun and sand for the miles of beaches that line its jagged shore.

Off the coast of Tuscany and reached by ferry from Piombino, on the Tuscan coast south of Livorno, Elba has more than 150 beaches. They vary from long sandy stretches to tiny pebble-beach coves. Some, such as Sansone, have shallow, gentle slopes that are good places to go for families. The waters off the sea cliffs are favorites for SCUBA diving.

There are things to do here besides the beaches. Hikers love the island's trails, and if you have a head for dizzying rides, you can take the basket-like cable car to the summit of Monte Capanne.

Among the most popular places to visit are Napoleon's Villa dei Molini in Portoferraio, and his summer retreat, Villa Napoleone on Monte San Martino.

In the mid-1600s, Count Vitaliano Borromeo built terraces on a tiny island of Isola Bella off Stresa on Lake Maggiore, creating a sumptuous summer palace and a terraced garden that tries to combine every feature of Italianate gardens into a very small space. The result of both is a sensual overload of gilded flourishes, grand salons, statuary, trees, flowers, and even a shell-encrusted faux cave.

It's great fun to visit, and after that, you'll relish a peaceful stroll around the spacious gardens and shaded lakeside paths of the neighboring Isola Madre, with its own more modest summer palace.

Stop for a meal of lake fish at the even more tiny Isola Pescatori, a fishing village that completes the trio of Borromean Islands. You can visit all three easily in one day by boat on a Lake Maggiore Isola Bella Hop-On Hop-Off Ferry Tour from Stresa, spending as much time as you like exploring the palaces and gardens.

The volcano erupts so regularly that cruise ships time departures from Sicily for evening, so they can sit off Stromboli to watch the fireworks against the night sky. It's quite a sight – and viewing it on a balmy Mediterranean night from the deck chair of a cruise ship is one of Italy's most romantic experiences.

What makes it especially exciting – it is after all a live and very active volcano – is you never know what an uncorked hole in the earth may do. In 2002, Stromboli blew off one whole hillside of the island and sent it careening into the sea.

Stromboli is only one of the Aeolian Islands off Sicily's north coast and reached from Messina or Milazzo by ferry. The archipelago's other six main islands are Vulcano (nearest to the Sicilian coast), Lípari, Salina, Filicudi, Alicudi, and Panarea, all rising out of a 4,000-meter-deep seabed.

The islands' mild climate, volcanic landscapes of fumeroles and thermal springs, and ancient relics (people have lived here since the Neolithic era) plus hiking and water sports make them popular places to visit. You can tour Lipari and visit another of the Aeolian island on the Vulcano and Lipari Aeolian Islands Daily Cruise from Messina.

Adrift in the Adriatic, north of the Gargano Peninsula and part of the Gargano National Park, the Tremiti Islands are a little-known archipelago named for their seismic activity (tremiti means earthquakes).

The most populated is San Nicola, but the best developed for tourists is San Domingo, where the only sandy beach, Cala delle Arene, is located. The smaller islands of Capraia, Cretaccio, and Pianosa are uninhabited.

A good way to see the islands is by boat tour, with stops at secluded coves and snorkeling sites. The islands have long been a secret of divers. Under the water are caves; rock formations; black coral; the remains of World War II aircraft; even a statue of Padre Pio, a much-revered 20th-century saint from that region. Some of the marked underwater nature trails are suitable for snorkelers, as well.

Water sports and walking trails provide most of the things to do on the Tremiti Islands, but the towns offer a few places to visit, including the Abbey of Santa Maria al Mare and a formidable castle, both on San Nicola.

More Islands to Visit in Europe: If you love beaches and island vacations, you will find plenty of ideas for places to go on Mallorca, Minorca, and Ibiza in our page on the top tourist attractions in the Balearic Islands. Or to feel as though you'd stepped onto the film set for Mama Mia refer to our page on the best Greek Islands for beaches. 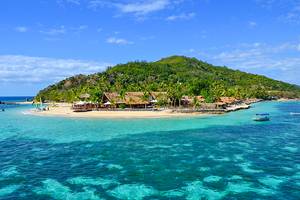 Discovering Pacific Islands: Those who long for even more exotic shores might be interested in visiting the Cook Islands in the South Pacific, often cited as some of the most beautiful islands in the world. 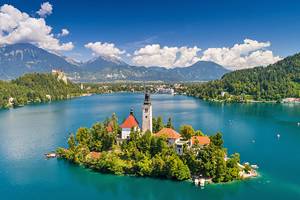 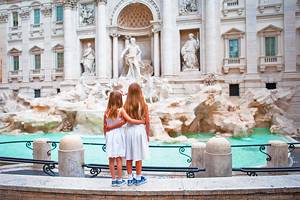 12 Best Places to Travel with Kids 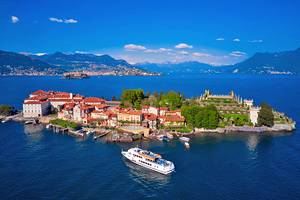 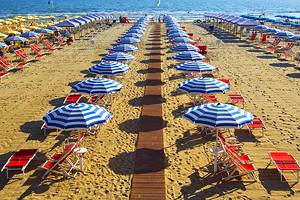 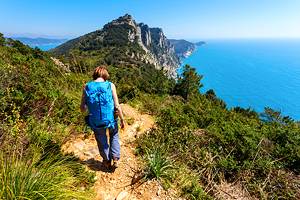 13 Top Things to Do in Italy 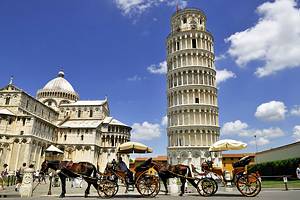 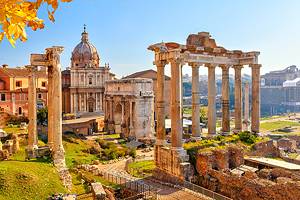 18 Best Places to Visit in Italy 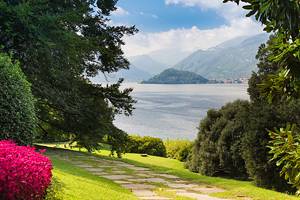 13 Most Beautiful Gardens in Italy 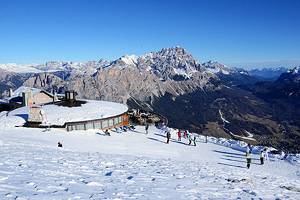 From Rome to Positano: 4 Best Ways to Get There
Recent Articles