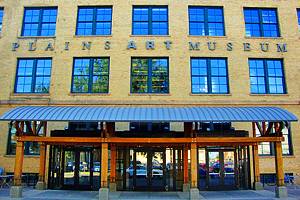 From the rugged badlands of Theodore Roosevelt National Park to the Art Deco State Capitol in Bismarck, the beauty of North Dakota deserves to be seen firsthand. Enticing historical figures, including past presidents, and the impressive environment carved by the Little Missouri River in Theodore Roosevelt National Park is worth a visit alone. Other historic, scenic attractions include Fort Abraham and Fort Ransom State Parks.

Lake scenes abound in North Dakota, too, providing photogenic landscapes at places like the 180-mile Lake Sakakawea and the ominous sounding Devils Lake.

The North Dakota Sate Capitol is one of the few Art Deco state capitol buildings in the nation. Construction was completed in 1934 during The Great Depression, and its simplistic design sticks high into the horizon. It's hard to argue about the aesthetics and eye-catching grounds the State Capitol encompasses, especially on sunny days in the summer.

Near the center of the state and Missouri River, the Knife River Indian Villages Historic Site transports tourists into the environment of the indigenous people of the region. Featuring a museum dedicated to the lives and culture of the Hidatsa people, as well as other Northern Plains Indians, this significant cultural site also includes a reconstructed Earthlodge and Hidatsa garden.

A popular spot for camping, hiking, fishing, and enjoying the changing seasons, Fort Ransom State Park is in the eastern part of the state within the heavily forested Sheyenne River Valley. Two historic homesteads can be toured within the park, and cabins are available for rent. Come winter, cross-country skiing and snowshoeing are both equally popular.

One of the largest bodies of water in North Dakota, the man-made Lake Sakakawea is over 180 miles long and incorporates more shoreline than the entire US western coast. Lining this scenic body of water are numerous state parks, including Lake Sakakawea State Park, where the nearby Government Bay Recreation Area is a great spot to launch a boat into the water.

Comprising over 4,000 acres in the southern part of the state, Chase Lake National Wildlife Refuge hosts hundreds of species of migrating birds each year, including one of the nation's largest breeding colonies of American white pelicans. Visitors can enjoy the sights and photograph the flora and fauna of this wild area on the various hiking trails that wind along the banks of the lake.

The oldest state park in North Dakota, Fort Abraham Lincoln State Park features riverside cabins, reconstructed military forts, and the unique On-a-Slant Mandan reconstructed village. An escape into nature and a step back in time, hiking and cycling trails lead throughout this state park near Bismarck, and the collection of campsites found near the banks of the Missouri are some of the most scenic in the state.

In the western part of the state, just outside the boundary lines of Theodore Roosevelt National Park, the Chateau De Mores is a 26-room, two-story mansion built in 1883 with Badland backdrops. Originally a summer home for Marquis de Mores, a famous frontier ranchman and duelist of North Dakota, this stunning building is now open for public tours and living history reenactments.

The name of both the surrounding body of water and the city, Devils Lake is a vacation destination just west of Grand Forks. Fishing, boating, and other water sports define much of the scenic appeal and fun at Devils Lake, though land activities like hiking, hunting, and golf are equally as popular. Great photo opportunities often occur at Devils Lake come sunset.

A unique touring adventure in the state, the Enchanted Highway receives its name much in thanks to the growing collection of sculptures found on the roadside. Spanning 32 miles between Gladstone and the small town of Regent, the different massive scrap metal sculptures easily catch the eye, providing plenty of opportunity to pull over and snap a picture.

An eye-catching entry into the city of Fargo, the Veterans Memorial Bridge spanning the Red River between North Dakota and Moorhead, Minnesota is a symbol of appreciation worth admiring. Dedicated to the men and women who have served the country, the towering pinnacles of this memorial also include interpretive information on the history of Fargo.

On the far western side of the state near Montana, Fort Buford displays authentic remains of a once-bustling frontier military post. Antiques still on display at this decommissioned government fort include cannons, a cemetery, and a museum converted from former officers' quarters. The vast open acreage surrounding the historic site enables visitors to envision themselves a century back in time.