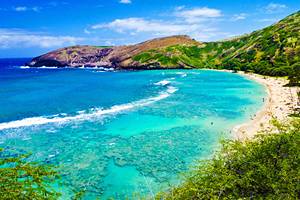 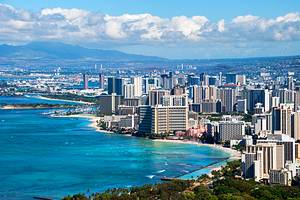 20 Top-Rated Attractions & Things to Do in Honolulu 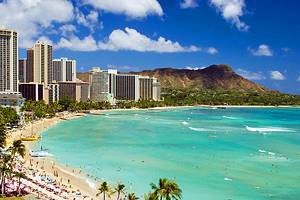 15 Top-Rated Tourist Attractions & Things to Do in Waikiki

Hawaii Volcanoes National Park is undoubtedly one of the most important attractions on the Big Island of Hawaii. The Halemaumau crater on the southern side of Kilauea is the home of the fire goddess, Pele. According to Hawaiian legend, a volcano will erupt if she loses her temper.

Volcanoes National Park lies on the southeast side of the Island of Hawaii and was founded in 1916. It includes a large part of Mauna Loa, all of Kilauea, including its eastern and southern sides, as well as the Puna Coast. In all, it covers an area of 21 square miles.

Beginning in July 1986 a series of eruptions spewed enormous quantities of lava up onto the surface. The island as a result has grown and continues to grow in size.

Kilauea is one of the most impressive volcanoes in the world, and its activities can be observed everywhere in the national park. The most accessible part of the national park is the Kilauea Caldera region, signposted off road 11 when traveling from either Kona or Hilo.

The last violent eruptions of the Kilauea crater occurred in 1790 and 1924. Since then, it has not appeared active.

Neighboring Halema'uma'u crater (Halemaumau crater) in the middle of Kilauea Caldera, is more active. On May 8th, 2018, the volcano rumbled back to life, and lava began to flow beneath the surface to emerge near the coastline in the residential area of Leilani Estates. Massive lava flows destroyed homes and property and extended the coastline into the ocean. Up near the crater itself, earthquakes and the subsequent damage closed the park for a while. However, as of the date of publication, a majority of the park is now open, the only exception being the Jagger Museum, which is permanently closed.

Eruptions on the slopes and in the thick forests are described only as flank eruptions, which are not as spectacular as summit eruptions as they usually bring only lava and are not accompanied by rivers of fire.

Lava flows have caused permanent changes to the landscape around Kilauea. Red-glowing magma, reaching temperatures of some 2200 degrees Fahrenheit/1200 degrees Celsius, forces its way almost constantly through lateral channels to the outside, streams out of holes down the sides of the volcano, and leaks out of weak spots known as fissures. One of these stretches out from the crater in a southerly direction as far as Ka'u, another east-north-east via Puna to the sea.

Lava sometimes flows through small valleys, which become filled in, and can destroy entire forests. But at the same time a new floor forms on which vegetation can grow, as demonstrated by the Destruction Trail in the National Park.

Lava masses bring great destruction. Time and again houses are buried and roads made impassable. In April 1990 all the houses in the coastal village of Kalapana and the greater part of the world-famous Kaimu Black Sand Beach were destroyed. Since then, road 130 between Kupaahu and Kalapana has also been partly destroyed. Only one of the village's two churches, the Star of the Sea Painted Church, could be successfully dismantled before the lava reached it; it was later rebuilt on stilts near the end of the road.

Despite all this the recent eruptions are considered mild compared with earlier ones. It was reported in 1790 that Keoua, a Hawaiian island chief and opponent of Kamehameha I, was resting with his troops near Kilauea when they were surprised by an eruption. The majority of the army died, leaving Kamehameha's troops little difficulty in defeating the remainder.

Current methods of assessing natural phenomena such as volcanoes and earthquakes have prevented loss of life through volcanic eruptions on Hawaii in recent times.

The 11-mile-long Crater Rim Road, which circles Kilauea Caldera, is the starting point for visiting major attractions in the park. It takes visitors past several of the key sights in the park, including Halema'uma'u Crater, Devastation Trail, Thurston Lava Tube, and the Kilauea Visitor Center. Along the way are several viewpoints over the volcanic landscape.

The very active Halema'uma'u crater, an enormous steaming sulfur scented hole spanning 2,625 feet, is, according to legend, inhabited by Pele, the Hawaiian goddess of fire. It was filled until 1924 with a bubbling sea of lava, but this eventually sank with a mighty roar beneath the floor of the volcano, and the lava flowed away. The hole filled up again in the 1960s but soon sank again and then was filled with water.

In late December 2020, the Halemaumau crater lake water was vaporized as the crater filled up with red hot lava. The lava lake remains as of writing and is estimated to be nearly 450 feet deep.

For a surreal experience consider taking the Kilauea Iki Trail. This 3.3-mile moderately difficult round-trip hike takes you down the rim to the floor of pit crater. It's hard not to feel a bit of trepidation and nervousness walking across a solidified lava lake that formed only 62 years ago. As you stroll along, steam hisses from vents as rainwater boils in the earth below. Take a moment to touch the ground, and you'll likely find that it's warm to the touch.

The trail is easy to follow and ends at a vent that allows you to peer deep into the earth. Count on two to three hours, and be sure to bring lots of water, as it's hot on the crater floor.

Along the southeast stretch of Crater Rim Road, a one-mile long-road leads to a 10-foot-thick recent lava layer known as Devastation Trail. On either side of the trail, a weird lunar landscape reveals itself. Devastation Trail was formed in 1959 as a result of an eruption from the small Iki crater.

At the time, only bare ohia trees remained but it was not long before fresh flowers and saplings began to grow. It's worth walking to the end of the trail to enjoy the fine view of the Iki crater.

The Thurston Lava Tube tube was formed by lava cooling at different rates as an eruption took place. The exterior of the lava cooled rapidly while the magma inside continued to pour through it, thus forming a hollow tunnel.

From the eastern section of Crater Rim Road a trail branches off to the Thurston Lava Tube, also signposted as Nāhuku. Park here and take the short trail that leads through a forest. Along the way, you'll encounter enormous ferns and trees in a lush environment that makes you feel like you've dropped into some ancient South American rainforest.

Eventually you'll reach a giant opening in the ground and descend into the earth. This subterranean adventure will take you through the 492-foot-long lava tube, with an average height of 20 feet. The path through the tube is illuminated.

Parking at the Thurston Lava Tube is very limited, plan to arrive here early or late in the day, or you may be disappointed.

The Kilauea Visitor Center lies on the edge of Kilauea Caldera, 550 yards to the left of the entry kiosk to the Hawaii Volcanoes National Park. In addition to general information packs and maps, suggested routes for walks are available here.

To make the most of your visit, check out the film about the history and development of the volcano and its most recent eruptions. The center also has the latest information on what's open and closed due to the always evolving volcanic activity.

A visit to the Volcano Art Center, situated near the entrance to the national park, is also recommended. The art center is renowned across the island for having one of the best and broadest collections of original art. If you are shopping for a signature piece for one of your walls or a gift for a friend, this is the place to come. Various works of art from local artisans include paintings, glass blown items, ceramics, fiber creations, and photography.

The Volcano Art Center occupies the old Volcano Hotel, built in 1877 and listed on the National Register of Historic Places.

Comprising about 99 acres, this park is a green oasis surrounded on all sides by lava flows. It is an ideal location for different species of endemic plants and trees, including koa, kolea, and mamani trees. Rare Hawaiian birds can also be spotted here.

The 1.9-mile round-trip path is mostly level and leads through meadows and forests, offering ample opportunity to experience Hawaii's unique plant world. A brochure detailing everything of interest in the bird park can be obtained at the entrance or downloaded in advance.

After you pass the turnoff for the bird park, Mauna Loa Road continues for 10 miles to a 6,564-foot-high viewing platform complete with a car park. If the weather is good there are fine panoramic views. A path leads on further to Mokuaweoweo crater at the summit of Mauna Loa, which reaches 13,676 feet. This 19-mile walk, climbing to a height of 6,564 feet, requires two days to complete and is only for fit and well-prepared hikers due to the extreme elevation and changeable weather conditions.

This 18.8-mile scenic drive descends from the Crater Rim Drive and ends at the sea where flowing lava has covered the road. Here visitors can park and walk across the lava to get a closer look at the steam where the lava plunges into the sea.

There are a number of crater overlooks, interesting lava formations and the Holei Sea Arch to add interest along the way. While most people take the drive during the day, some return at night to better see the glowing lava.

The road is a fascinating drive across a landscape that is impossibly black. No services are along the road so make sure you've got enough fuel for the round trip. 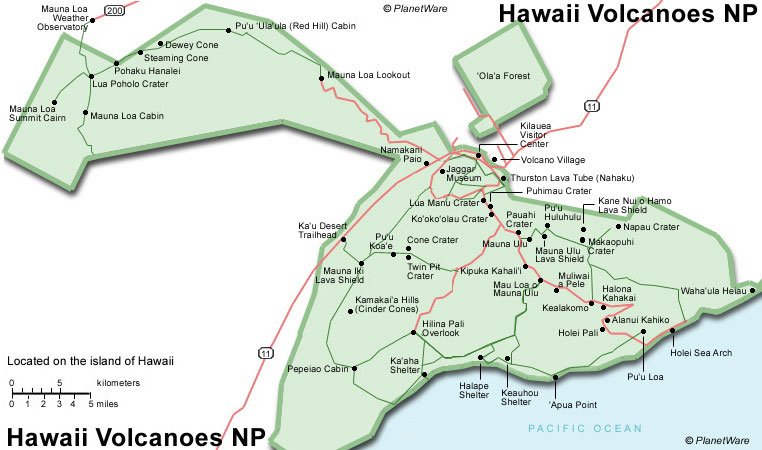 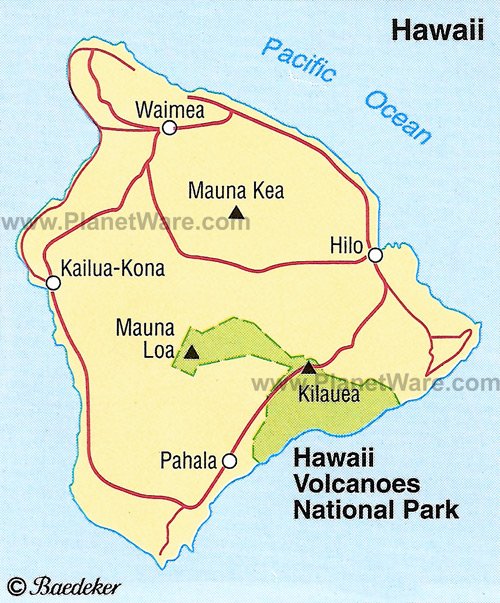 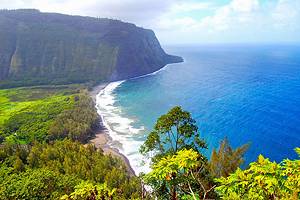 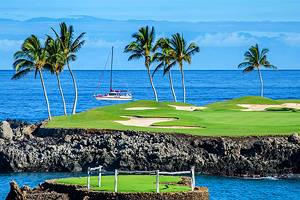 13 Top-Rated Resorts on the Big Island of Hawaii 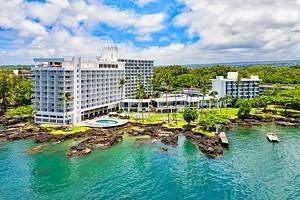 16 Best Hotels on the Big Island of Hawaii 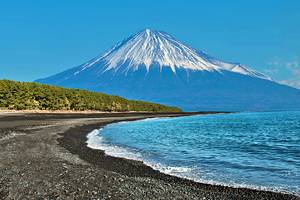 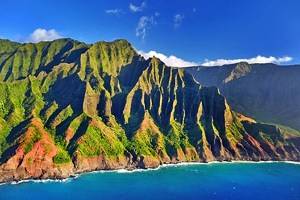 18 Best Places to Visit in the USA in December 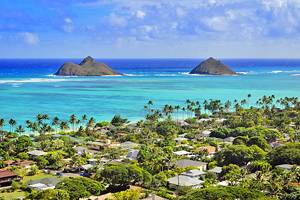 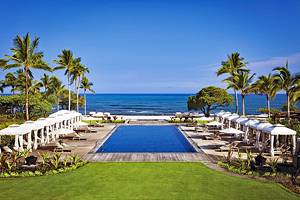 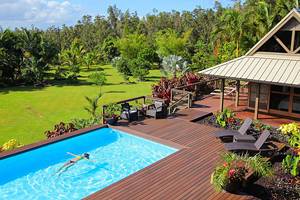 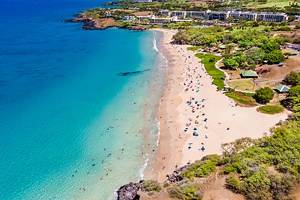 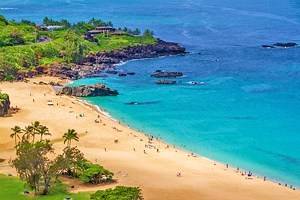 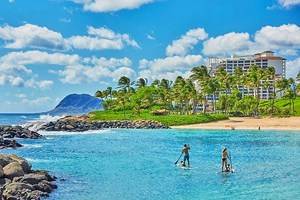 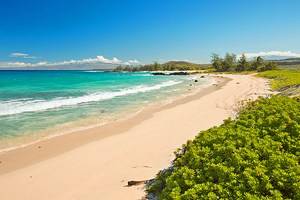 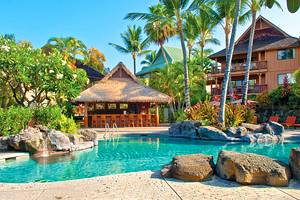 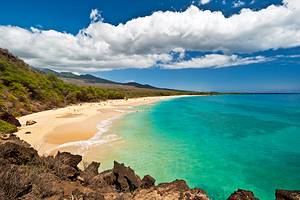 22 Most Beautiful Islands in the World
BE INSPIRED!
MORE PICTURES OF HAWAII