Written by Barbara Radcliffe Rogers
Sep 9, 2019
We may earn a commission from affiliate links ()

The historic port town of Lunenburg, now a UNESCO World Heritage Site, was founded in 1753 in an early effort by the British to establish Protestant settlements in Nova Scotia. Both Lunenburg and neighboring Mahone Bay were fishing and shipbuilding centers; ships built along this shore have sailed the world's waters for more than two centuries. These combined heritages make the area popular for tourists, with attractions and things to do that highlight both.

The famed sailing ship Bluenose II is often in port, moored alongside the excellent maritime museum. Other museums record railroad history and the lives of early settlers. Colorful wooden homes, waterfront warehouses, and elegant churches fill the steep slopes of Lunenburg, while Mahone Bay's low shore is lined with a postcard scene: a trio of stately churches and pretty Victorian-era homes.

Shopping is a popular thing to do in Mahone Bay, which is especially known for its studios and galleries featuring the work of local artists and craftspeople.

You won't miss any of the highlights if you plan your visit to Nova Scotia using our list of things to do in Lunenburg and Mahone Bay.

Accommodation: Where to Stay in Lunenburg

Lunenburg's claim to fame is the legendary Bluenose, a fishing schooner built here in 1921. The vessel was the world's best racing schooner, and the winner of many international races. Known as the "Queen of the North Atlantic," Bluenose became the symbol of Nova Scotia and an icon for all Canada. After the original schooner was wrecked in the 1940s, a replica, Bluenose II, was built, and Lunenburg is her home port.

You're most likely to see the ship here in June and September—midsummer is often spent on tour or racing (the full schedule is on the website). When in port, Bluenose II welcomes passengers on two-hour sailing cruises, and in 2020 visitors will be able to join the crew to participate in a day of sailing, taking a turn at the wheel, standing watch, handling sails, and learning how to sail a schooner.

2. Fisheries Museum of the Atlantic

Housed in a former fish factory on the waterfront, the Fisheries Museum of the Atlantic tells the story of sailing and fishing along eastern Canada's coasts from the time when the Mi'kmaq fished these waters. Old photographs and prints and examples of past tools and equipment bring exhibits to life, as do the frequent hands-on activities and real-life stories told by retired fishermen. The Marine Life Gallery explores the ocean depths and the creatures that live there.

For many, the highlights are the actual boats moored alongside the museum, especially the Theresa E Connor, Canada's oldest saltbank schooner, built here in 1938. Here and on the Cape Sable trawler, museum staff—some of whom once sailed on similar vessels—demonstrate the traditional methods of cod fishing and tell what life was like on board.

Lunenburg is the best surviving example of a planned British colonial settlement in North America, and the Lunenburg Old Town Heritage Conservation District encompasses about 400 major buildings, most dating from the 18th and 19th centuries. The entire area retains the original geometrical street grid, and on a walk though it, you will see colorfully painted homes and shops with wooden trim, as well as warehouses and other maritime buildings on the waterfront. The district is cited by Canada's Register of Historic Places for its "dense concentration of historic architecture."

One of the places to visit while touring the district is the Knaut-Rhuland House, a free museum that illuminates the lives of the early settlers and their descendants. As you walk, be sure to notice the unusual architectural feature known as the "Lunenburg Bump"—a large overhanging dormer usually at the center of the front façade. This feature is unique to the area; you'll also see one at the Begin house, the historical museum in Mahone Bay.

About a 10-minute drive from Lunenburg along the scenic southern shore, is the old fishing village of Blue Rocks. The picturesque little harbor is almost completely free of commercial incursions, apart from a general store and an artist's studio or two. Find an out-of-the-way place to park and walk along the shore to see the fantastically carved rocks. Thin layers of different density rock in shades of blue, gray, and white have eroded unevenly to form a surface of three-dimensional bands. This is not a place to just drive to and snap a few pictures then leave. You need to walk along the shore to appreciate rock formations and the changing scenery.

The second oldest Anglican church in North America, St. John's is one of the most outstanding examples of the Carpenter Gothic style in North America. What you see today is a meticulous reconstruction after the church was nearly destroyed by fire in 2001. Volunteers are often on hand to tell how local people gathered up the shattered fragments of the stained-glass windows after the fire, so local artists could incorporate these into the new windows.

The roof beams used in the original church, which was built in 1754, were shipped from the old King's Chapel in Boston. Notice the stars on the chancel ceiling, which are aligned to show the sky over Lunenburg at the time of Christ's birth, as researched by an astronomer.

One of the most enjoyable things to do in Lunenburg and Mahone Bay is to explore the many (365, it is claimed) islands and get a new perspective on the southern coast of Nova Scotia from the sea. You have a lot of options, among them a whale watching ship, on a ketch under sail, or under your own power in a kayak.

Guided kayak tours leave from both Blue Rocks and Mahone Bay, where there are also kayak rentals for exploring independently. The Eastern Star is a 48-foot ketch that does sailing tours from Lunenburg, sailing among the islands. Whale watching tours from Lunenburg move out into the Atlantic, where minke, pilot, finback, and humpback whales are commonly seen, as are seals, porpoises, and dolphins. Puffins are also a common sight in the summer.

Although small, the museum inside the former Begin family home in the center of Mahone Bay does a good job depicting the early history as settlers arrived and spread into the area in the mid-1700s, and the town's later shipbuilding legacy. There is information on the three landmark churches, the area in World War I, and the enigmatic Oak Island. The map showing where some of the more than 500 ships built in Mahone Bay sailed is especially interesting. There are exhibits on early kitchens and antique toys, as well as the Begin family.

Rail buffs will not want to miss the museum devoted to the former Halifax & Southwestern Railway, with its exhibits on the route and history of the line that once connected this area to Halifax. There's a replica of an old ticket office, and memorabilia, from old timetables to buttons and conductor's uniforms.

But the attraction that makes this a popular thing to do for families is the scale model of the railroad, complete with miniature buildings (kids will recognize some of them immediately as ones they've seen in Lunenburg) and geographical features. The scene with the train steaming through is fascinating enough, but then night falls inside the museum and the scene lights up, with lights shining from the house windows, miniature streetlights, and the single headlight on the model train's engine.

Where to Stay in Lunenburg and Mahone Bay for Sightseeing

These hotels and bed-and-breakfasts are all low to moderately priced in the off-season, but expect some rates to soar in July and August.

Where to Go in Atlantic Canada: From Nova Scotia, you can take a ferry to Saint John, where you'll see many of the top tourist attractions in New Brunswick, or you can drive across the isthmus to visit Moncton and explore the natural wonders of the Bay of Fundy. Lovely Prince Edward Island can also be reached by ferry or by crossing the Confederation Bridge, near the border between Nova Scotia and New Brunswick.

17 Top-Rated Attractions & Things to Do in Bar Harbor, ME 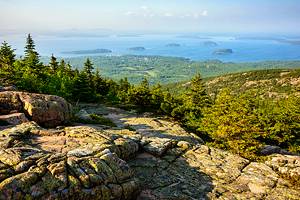 14 Best Things to Do in Bangor, Maine
Recent Articles