With beautiful bayside views and coastal redwood forests, San Francisco hiking trails illustrate what makes the City by the Bay one of the greatest in the world. With iconic landscapes and attractions like Muir Woods, the Golden Gate Bridge, and Land's End, many stunning day hikes can be accessed from "The City." For hikes within San Francisco, one of the first places to head is Twin Peaks to get a view of downtown Market Street and the Golden Gate Bridge.

The illustrious Golden Gate National Recreation Area is the true backbone of hiking trails in the Bay Area. Encompassing over 80,000 acres and 37 distinct park units north and south of the Golden Gate Bridge, it contains quintessential hiking areas like the San Francisco Presidio and the Marin Headlands. Located north of the Golden Gate Bridge, the Marin Headlands features other coastal hiking areas, including Point Bonita Lighthouse and the verdant Tennessee Valley.

South of the city in Pacifica, the Golden Gate National Recreation Area also oversees Mori Point, which itself oversees a grand ocean view. Near Oakland, the East Bay Regional Park District manages campgrounds and hiking trails at Redwood and Anthony Chabot Regional Parks. For a true gem in the San Francisco Bay, the hiking trail that circles the scarcely developed Angel Island State Park is only accessible by ferry.

For more ideas on where to hike around the City by the Bay, see our list of the best hiking trails near San Francisco.

Encompassing nearly 1,500 acres on the northern tip of San Francisco, connected to the Golden Gate Bridge, the Presidio of San Francisco is an iconic destination for Bay Area views. A former military post until 1994, the park features numerous hiking trails, swimming beaches, and historic military structures. Cultural attractions like the Presidio Officers' Club and the Walt Disney Family Museum are also found within this defining San Francisco public space.

Vehicles are allowed on the roads of the Presidio, but the best way to take in the Bay Area beauty is on foot and walking near the shore. East of the Golden Gate Bridge, near the historic Fort Mason, visitors can access the Golden Gate Promenade and Crissy Field alongside a sandy beach where dogs can run leash-free.

Hikers, bikers, and joggers can continue through the historic Crissy Airfield until reaching the Golden Gate Bridge Welcome Center less than two miles away.

A coastal trail stretches along the southwest shoreline from the Golden Gate Bridge, where hikers come across the Batteries to Bluff Trail with stunning views of the bridge. This side of the Presidio also lends access to Baker Beach—one of the best beaches in San Francisco. The equally iconic Lands End Trail is farther southwest along the shore from Baker Beach.

One of the most popular hikes for tourists and locals of San Francisco, Twin Peaks is the second tallest point within city limits (Mt. Davidson is the first). On clear days atop Twin Peaks, visitors can see every San Francisco landmark, including the Golden Gate Bridge, Alcatraz Island, and downtown Market Street. Visitors can also see across the bay into Oakland with Mount Diablo off in the distance.

Fog and other moving systems can hinder views atop Twin Peaks, but when the timing is right, the overlook is spectacular. Visitors can drive nearly to the top of either the South or North Peak, with a short trail and wooden steps leading to the actual summits. For those looking to earn the views with a little hiking or bicycling, adjacent pathways run alongside Twin Peaks Boulevard. Users can also hike through Glen Canyon Park to Portola Drive and pick up the Twin Peaks Trail from there.

Hikers and mountain bikers can also reach the forested slopes of Mount Sutro from Twin Peaks. Primarily owned and managed by the University of California San Francisco, the 61-acre Mount Sutro Open Space Preserve attracts more locals than tourists. To the east of Twin Peaks, Bernal Heights offers a casual one-mile loop with more great views of the Bay Area.

North of the Tennessee Valley in the Marin Headlands, Muir Woods National Monument protects a stunning example of old-growth coastal redwoods. The best way to experience the neck-craning canopies of these redwoods, some over 200 feet tall, is the boardwalk path within the monument that follows the banks of Redwood Creek. Starting from the Visitor Center, this universally accessible trail meanders alongside these massive trees and provides information about their 800-plus-year history in the region.

The boardwalk trail traverses both sides of the creek with three different bridges to cross. Making it to each bridge adds roughly 30 minutes to a hike, and maybe longer depending on how much you stop to admire the massive tree trunks all around. Dirt hiking trails lead up the canyon walls from boardwalk path, and each lend different vantage points of the giant forest.

Southwest of Baker Beach and the San Francisco Presidio, Lands End provides a dramatic coastal trail and a great view at the edge of the continent. Heading north along this ocean-edge trail is the most common way to go, starting at the Lands End Visitor Center within the Sutro Historic District.

The historic foundations of the lavish late-1800s Sutro Bathhouse can be seen before even starting the trail, as well as the rehabilitated Cliff House restaurant and public space that overlooks Seal Rocks.

A few strenuous hills are encountered heading north from Sutro Baths along the Lands End Trail, but the route is mostly flat. Views of the Bay filter in along the two-mile route, including areas where past ships have wrecked when trying to navigate the notoriously tricky waters. The Golden Gate Bridges comes better in sight the farther you make your way north along the trail, where hikers eventually reach a turnaround point in the affluent Sea Cliff neighborhood.

Within the Marin Headlands north of the Golden Gate Bridge, the Tennessee Valley Trail is a popular family hike to a sandy beach and overlook. The quickest trail to Tennessee Beach spans 1.7 miles from the trailhead with very little elevation gain. More strenuous hiking trails branch off the Tennessee Valley and up the surrounding steep hills.

The most popular view hikes at Mount Diablo State Park in the East Bay lead straight to the summit. The easiest route is the one-mile Mary Bowerman Interpretive Trail, which leads from the Summit Visitor Center.

On the other end of the spectrum, the trail through Mitchell Canyon spans nearly eight miles and has over 3,500 feet of elevation gain. A more demanding hike, the Mitchell Canyon route also offers the most dynamic landscapes to hike through.

Angel Island is the largest natural island in the San Francisco Bay, with a hidden gem of a hiking trail close to San Francisco. The state park is only accessible by private boat or public ferry, and a paved and approximately five-mile road circles the entire island and is open to pedestrians.

A designated hiking-only trail system stems from the road and has paths that lead to the 788-foot summit of Mt. Livermore—the tallest point on the island. Picnic tables, restrooms, and potable water are available on Angel Island.

South of the city in central Pacifica, on the San Mateo County coast, Mori Point offers stunning hiking trails next to the ocean. An easy drive or bus ride from the city, this 32-acre wetland waterfront has numerous trails to explore, including an accessible boardwalk trail that leads to the ocean. Higher vantage points are available via dirt trails and steep steps that lead up to Mori Point and the surrounding foothills.

Mori Ridge can be accessed on the other side of Highway 1 from Mori Point, which steeply connects to the more inland Sweeney Ridge Trail. The 1,200-foot summits atop Sweeney Ridge provide a comprehensive view of the Bay Area.

Both Mori Point and Sweeney Ridge are managed as part of the Golden Gate National Recreation Area. To the south, San Pedro Valley Park features additional trails, including the iconic Montara Mountain Trail.

On the southern border of San Francisco, San Bruno Mountain is surrounded by nearly 2,500 acres of parkland. A shaded picnic area with barbecue pits is at the entrance of San Bruno Mountain Park, as well as numerous trailheads, like the Summit Loop that delivers hikers to the top of the mountain. The two-mile trail to the top goes through a coastal shrub environment and crosses Radio Road along the way.

Other popular hiking trails in the mountain park include the Eucalyptus Loop Trail and the Old Guadalupe Trail.

Encompassing over 18,000 acres near Oakland in the East Bay, Redwood Regional Park is a popular place to get away from the crowds. With nearly 40 miles of trails and the largest intact stand of redwood trees in the East Bay, the Skyline Gate Staging Area in the northwest corner of the park is a good first place to head to see some big trees.

Heading on either the Stream Trail adjacent to Redwood Creek, or either direction on the East and West Ridge Trail, provides a relatively flat grade, and junctions to make a looped hike.

Encompassing over 70,000 acres of a nearly detached coastline an hour north of San Francisco, Point Reyes is the only nationally designated seashore on the West Coast. It's easy to escape San Francisco with a trip to Point Reyes and the many beaches, lagoons, and wild places it protects. Three visitor centers help orient visitors at Point Reyes National Seashore, including the Lighthouse Visitor Center, located on the extended tip of the Point Reyes Headlands.

The Chimney Rock Trail extends from the Lighthouse Visitor Center for just under two miles. Both the beating waves of the ocean and the calm waters of Drakes Bay can be seen heading down the trail, and the route offers a great vantage point for whale watching throughout much of the year. The trail can be a bit steep at points, and stairs have been built into the ground on certain portions of the hike.

Hikers can access this still-active lighthouse, constructed in 1885, with a half-mile hike from the Nike Missile Site. More intrepid hikers can reach the lighthouse from the Golden Gate Bridge via paved and dirt pedestrian paths, including the Coastal Trail. Other sites to see along the way in this part of the Marin Headlands include Kirby Cove, Hawk Hill, and Black Sands Beach.

Adjacent to Redwood Regional Park in the East Bay, Anthony Chabot offers a great hiking destination that doesn't receive as many tourists as hiking trails in the Golden Gate National Recreation Area. A 20-minute drive from Oakland, the Lake Chabot Loop is a 12.5-mile multi-use trail that circles the park's centerpiece attraction. Numerous side hikes stem from the Lake Chabot Loop, and hikers should expect to encounter mountain bikers and horse riders also sharing the trail. 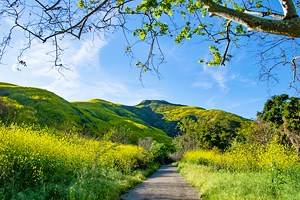