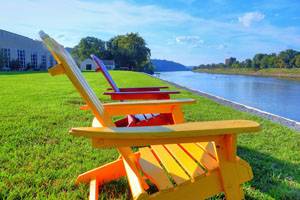 West Virginia is an angler's paradise, not just because of the vast number of lakes, streams, and rivers flowing through the state, but for the variety of trout fishing opportunities available. The brook trout is the only native trout species in the state, but due to a robust stocking program through the West Virginia Division of Natural Resources (WVDNR), anglers can also catch rainbow, brown, and the unusual golden rainbow trout that originated in the Mountain State.

More than 200 waterways are stocked throughout West Virginia, many of them in the mountainous eastern part of the state. The WVDNR stocking program is multi-faceted: to stock some waters with trout that are sizable to harvest, to supplement the natural stock with fingerlings to help with trout reproduction, and to stock areas that have depleted populations by reintroducing trout.

While West Virginia has a robust stocking program in place, especially for rainbow, golden rainbow, and brook trout, a number of streams, including the Cranberry, Williams, and Greenbrier River, are not stocked with brown trout since they are predatory toward other fish species. Brown trout are predatory toward the endangered candy darter for which these streams provide critical habitat.

The stocking schedule is different for every waterway and every year, so anglers should consult current schedules in each area.

The most unique trout in West Virginia waters is the golden rainbow trout. It is unique to West Virginia and originated in the state when one trout with golden bands was discovered in the 1950s. Over a period of reproductive years, a stock of 300 completely gold trout emerged and have been reproducing ever since.

You can find golden rainbow trout throughout the year, but anglers can also get in on "The Goldrush Program," which takes place each spring. It is designed to encourage kids to fish and celebrate the state's unusual, completely gold-colored, trout. One week each spring, certain streams are heavily stocked with golden rainbow trout. An angler who catches a tagged trout gets a T-shirt and bragging rights.

Anglers will get a lot of use out of the state's interactive map of rivers, streams, and lakes for targeting trout. You can identify stocked sections, access points, and regulations about bait and catch-and-release or fly-only sections. Do not forget to get a state fishing license and review current fishing information at wvdnr.gov.

The centrally located Cranberry River is surrounded by forest service land and is a remote wilderness area. The large river is a prime location for trout anglers who want a more rustic experience, especially for fly rod anglers in search of wild brook trout.

The catch-and-release, fly-fishing-only section is located upstream of the stocked waters in areas like Dogway Fork. This area in only accessible by foot or on bike. The stocked section of Cranberry River is a nearly 15-mile stretch that runs parallel to Cranberry River Road, so there are many access points in the area.

This section is stocked with rainbow, golden rainbow, and brook trout that can be harvested. Since these sections of river are wilderness areas, some anglers pack a tent and make a week-long vacation out of it.

Another top trout waterway in West Virginia, the Williams River, is also in a wilderness area. The larger river system and backwoods experience appeals to trout anglers who are looking as much for the primitive outdoor challenge as they are the stellar day of fishing on the water.

While many sections are general and available for harvest catches, there are some catch-and-release-only sections of this waterway, so refer to the state regulations before planning your outing.

The Smoke Hole section of the South Branch River features natural forest land but it is not as remote as the trout sections of the Cranberry and Williams River systems. It is a bit more accessible for anglers looking for a rugged experience but it is not remote wilderness.

A 9.3-mile section of the South Branch River running parallel to Smoke Hole Road is stocked with rainbow, golden rainbow, brook and brown trout marked as general regulations except for one-mile section in the middle near Pretty Ridge Road that is catch-and-release only. The Smoke Hole section of river is located near the Virginia state line, and you are surrounded by the stunning view of the mountains.

The waters at Shavers Fork River are preferred for trout fishing because there are multiple stream sections that feed into the main river that are also stocked with rainbow, golden rainbow, brook and brown trout. Most of the stocked river sections flow through Randolph County near Elkins. The main section starts on Spruce Knob, which is the highest point of the state, with nearly 50 miles of stocked water.

There are both general designation sections for harvesting trout, as well as catch-and-release only sections. Many of the general designation sections are easily accessible by the road. During certain times of the year, trout are transported by train and stocked near Spruce Knob, which is a beautiful area for anglers who want to enjoy one of the most scenic spots in the state during their fishing trip.

The Elk River offers a wide range of trout fishing opportunities for golden rainbow, rainbow, brook and brown trout. There is a catch-and-release only section and a long stretch of general designation waters downstream. The river is pleasant and scenic and easily accessible.

There are multiple public access points at the Back Fork of Elk River, the Elk River Rail Road Bridge, Webster Springs Park, Baltimore Run, Jim Compton WMA, and access at the scenic Whitaker Falls. One of the conveniences of the Elk River is the lodge and fly shop in Elk Springs. Anglers have easy access to fly rod lessons, equipment, and lodging right near the water.

The North Fork River presents lots of trout opportunities for all of the stocked species, including rainbow, golden rainbow, and brown and brook trout. There are 40 miles of stocked areas with general designation available for harvest.

One of the most popular public access areas with easy water accessibility is near Smoke Hole Caverns. This spot is also nice if you want to do a little excursion at the caverns after your day of fishing. There is one small half-mile section of catch-and-release only located at Seneca Rocks that is best for anglers who are looking to fish for wild rainbow and brook trout. Seneca Creek empties into this area, bringing with it additional trout opportunities.

The Blackwater River is an ideal waterway for anglers and families that want to get kids into fishing and who are looking for an easy experience. There are large sections upstream of Blackwater Falls that are stocked with rainbow, golden rainbow, and brook and brown trout with a general designation, so fish are available to harvest.

There is also a stocked lake at Blackwater Falls in Blackwater Falls State Park. There are many nearby amenities, attractions, and lodging if you want to turn it into a vacation and do some sightseeing.

The lake in Pipestem State Park is a public fishing lake that is stocked with trout, as well as other game species. Trout anglers can target rainbow and golden rainbow trout earlier in the stocking season, and brown and brook trout later. The lake has a general designation, so trout can be harvested.

This lake is accessible from the banks, and there is a public access area with restrooms and parking located at Long Branch Lake. Since this lake is located within the state park, there are many amenities like restrooms. Also nearby are hiking trails and a tram that goes across Blue Stone Canyon.

There are a number of reservoir tailwater areas in the state that have prime trout fishing for rainbow, golden rainbow, and brook and brown trout. The top tailwater areas are Sutton Lake, Summersville Lake, Stonewall Jackson Lake, Burnsville and Tygart Lake and state park. All of these areas have dams where you can target trout just below them, as well as fishing piers and nearby amenities.

The one advantage that these tailwater areas have, especially for novice trout anglers, is easy access to big water. While all are located in different areas, they are all in close proximity to interstates. This makes it easy to plan a day of trout fishing that does not involve a long trek to the water or a big time commitment. Jackson Lake has a resort nearby if you want to plan a longer trip.

One of the new and exciting trout fishing areas in West Virginia is on the Greenbrier River. A section of the river will be stocked with rainbow, golden rainbow and brook trout beginning in 2019. The section starts at the Cass Scenic Railroad at the park with stocked areas following the rail trail for several miles.

This is an exciting area to fish because there are several access points with parking areas that are right next to the stream. There are also a few sections that require walk-in or bike-in accessibility for anglers looking for that additional outdoor challenge. The stocked areas are general designation, so fish are available for harvest.

The Cacapon State Park lakes sit in the shadow of Cacapon Mountain in the eastern panhandle of West Virginia. Two lakes within the park are stocked each spring with rainbow, golden rainbow, brook, and brown trout. These are recreational fishing lakes, so you will also see anglers fishing for bass, catfish, and bluegill.

The lakes at Cacapon State Park are not as secluded as other trout fishing areas in West Virginia, but they are easily accessible for anglers who do not want to venture into remote wilderness areas. The park is located near the town of Berkeley Springs, where you can base yourself if you do not plan to book a cabin or lodge within the state park.

The scenery at Spruce Knob Lake is as impressive as its trout fishing. It is a 23-acre impoundment lake, which is stocked regularly with rainbow, golden rainbow, brook, and brown trout. Due to its high elevation, Spruce Knob Lake water stays cool and is an excellent trout fishery from the spring and into the summer.

Spruce Knob Lake is more remote than other West Virginia trout waters, but it has gained a reputation as an excellent trout-fishing waterway. It is a productive trout fishery, and a number of trophy-sized trout have been recorded from these waters. Anglers are able to launch and fish from small boats or kayaks or fish from the shore.

Fishing in Nearby States: For more trout fishing opportunities, consider heading to the mountains of North Carolina and use our article on the Best Rivers for Trout Fishing in North Carolina as your guide. This will not only point you in the right direction but also provide useful tips. Also see our piece on the Best Fly Fishing Destinations in Tennessee. 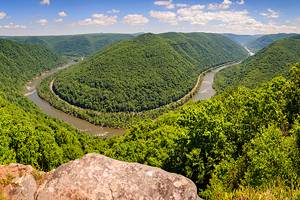 14 Best Things to Do in West Virginia 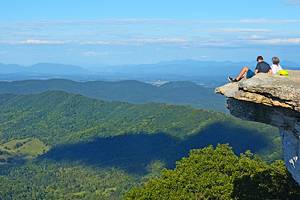 15 Top-Rated Things to Do in Roanoke, VA 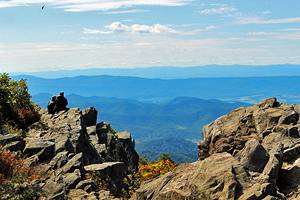 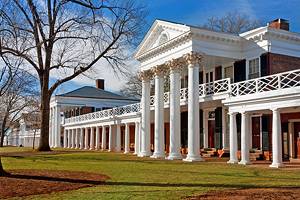 11 Top-Rated Attractions & Things to Do in Charlottesville, VA 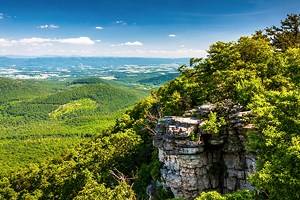 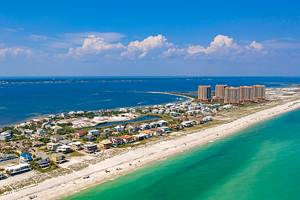 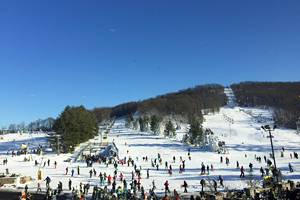 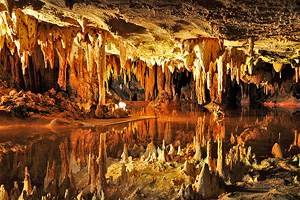 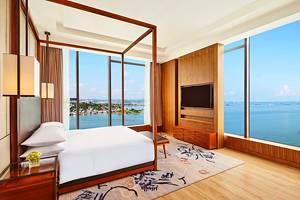 22 Most Beautiful Islands in the World
BE INSPIRED!
MORE PICTURES OF WEST VIRGINIA