Everett is 25 miles north of Seattle and is the largest city in Snohomish County. It’s a significant business hub and home to the largest building by volume in the world: Boeing’s massive jumbo jet assembly plant. The city is also home to the Port of Everett Marina, the largest public marina on the West Coast.

These significant economic centers and the city itself nestle between the Snohomish River and Port Gardner Bay. This landscape offers a majestic Pacific Northwest backdrop to the city’s many attractions. Much of this scenery is available to experience at places like arboretums, public parks, and cultural centers.

Enjoy your next Pacific Northwest getaway with our list of the top things to do in Everett.

The Boeing Company is a world-renowned manufacturer of aviation equipment with a long history in the Pacific Northwest. The company began in Washington over a century ago and is now one of the largest private employers in the state. Alongside iconic jetliners like the Boeing 747, the company also specializes in defense and space travel. Impressive pieces of their portfolio include Apache helicopters and critical attributes to the International Space Station.

Much of the engineering and manufacturing of these society-defining vessels takes place in Everett. And with the world’s largest manufacturing plant, Boeing Everett leaves a notable impression on the city. The facility’s Future of Flight Aviation Center offers a peek into this behemoth of American manufacturing.

The starting point at the Aviation Center is exploring the main gallery, filled with Boeing products and innovations. This gallery shares the Boeing Company timeline, from the early 1900s aviation to modern space travel and beyond. Several interactive exhibits also explain the basic principles of aviation.

The full experience of visiting comes from the Boeing Factory Tour, which departs from the Aviation Center. These 90-minute tours take place seven days of the week and involve less than a half-mile of walking with a few stairs. Along the way, watch engineers assemble modern marvels like 747s and 777s in the largest building in the world.

Funko is a purveyor of toys and fun in downtown Everett. Specifically, this Everett-headquartered global toy company produces Pop! Vinyl collectible figures. These big-headed figurines touch many aspects of pop culture. Among their collections are fan favorites like Harry Potter, Disney, and a massive swath of movie characters.

The downtown headquarters is hard to miss. Larger than life Pop! Vinyl figurines adorn the outside of the building on the corner of California Street and Wetmore. And these outdoor figurines are only the beginning of photo opportunities and experiences at the flagship shop.

It’s a combination retail space and an eccentric museum inside Funko Everett. Alongside hundreds of Pops for sale all over the place, several other giant figurines punctuate the store. Visitors also have the unique opportunity to design their own Pop collectible and take it home.

The Evergreen Arboretum & Gardens is on the city's north side, in a separate area within American Legion Memorial Park. The 3.5 acres of manicured green space at the arboretum offers immediate entry into more tranquil surroundings. A small army of volunteers maintains the landscaping, and their work shows with each step through the gardens.

An ADA-accessible pathway connects eleven themed areas in the garden. These themed gardens include Pacific Northwest native plants, Japanese maples, and several pieces of hardscaping like walls and rock gardens. Several benches and places to sit also line the route.

What makes this arboretum stand above others is the thoughtful sculpture additions to the natural space. These creative pieces blend into the surrounding foliage and offer extra aesthetic appeal.

This non-profit art education center is in downtown Everett and offers free admission to the public. It displays a rotating collection of local and regional artworks with an emphasis on up-and-coming young artists. It’s a visual treat walking through the Art Center, with chances of seeing something new with each visit.

A big part of the Art Center’s community impact comes from its wide range of classes and art demonstrations. One of the most popular art forms is the professional glassblowers working in the center’s hot shop. Other live demonstrations and studios include printmaking, silversmithing, and flameworking, among many others.

Different classes at Schack cater to children, teens, and adults. A few curriculums for those over age 18 include jewelry making, gemstone cutting, and beginner stained glass. Check out Schack's official website for the latest course offerings.

5. Angel of the Winds Arena

Angel of the Winds Arena is a 10,000-seat venue and a regular host of family-friendly events downtown. One of the biggest draws to the arena is the Everett Silvertips, the hometown major junior hockey league team, part of the Western Hockey League. The team typically packs the arena throughout the regular season from September through March.

Angel of the Winds Arena also hosts several non-ice-related events, including concerts, trade shows, and conventions. The venue is also a popular spot for professional engagements, with several large meeting rooms available. Check out the arena’s official site to see a calendar of events.

The Hibulb Cultural Center is north of Everett across the Snohomish River, on the Tulalip Reservation. This massive facility and surrounding 50-acre property share the past, present, and future of the Tulalip Tribes.

Shared information includes the formation of the Tulalip Tribes. This modern-day tribe contains Snohomish, Snoqualmie, Skykomish peoples, and all Indigenous tribes that signed the 1855 Treaty of Point Elliott.

The facility comprises several exhibits. One not to miss is the Main Gallery, with interactive elements that share this story of the Tulalip tribes. Here, learn the history that predates colonization by thousands of years. Other permanent exhibits in the Cultural Center include a Canoe Hall and an interactive Longhouse with recorded stories from native storytellers.

The Cultural Center also hosts several community events and cultural demonstrations. These engagements include a speaker series and film series. The center also hosts a celebrated film festival every year in November.

Legion Park is one of the most popular public spaces in the city. It offers several visitor amenities, including modern playground equipment, pickleball, and tennis courts, and a bluff hiking path with brilliant views. American Legion Memorial Park, also known as Legion Park, is also home to the 3.5-acre Evergreen Arboretum & Gardens.

The park is on the north side of town, near the Snohomish River and Port Gardner. Before any development seen today, this verdant area was home to a major village of the native Hibulb peoples. The bluff hiking trail lends an excellent view of this landscape, and adjacent interpretive information relates the area's historical importance.

Legion Memorial Golf Course also offers a landscaped 18 holes bordering the Arboretum. This city-owned course has operated for nearly 90 years, and thanks to a recent remodel in 2019, it’s one of the most popular in the Seattle region. Legion Memorial is a public course, and advanced tee times are recommended for the weekend.

The Everett Farmers Market has provided locally sourced entertainment for nearly 30 years. These Sunday markets occur on Hewitt and Wetmore Avenues between 11am and 3pm. And each week features a festive collection of growers, processors, and artisans. Several concessionaires are also on-site, offering fresh and hot food.

Live music always provides a soundtrack to the strolling at the Everett Farmers Markets. New musicians take the microphone every week, adding an upbeat sense to the shopping. It’s a popular event for the whole family, although visitors are asked to keep pets out of the shopping corridor to prevent crowding and congestion.

Howarth is a small slice of urban getaway on the city's west side, overlooking Possession Sound (part of the larger Puget Sound). The park features several amenities, including hiking trails, an off-leash dog park, and tennis courts. But its pinnacle feature is a concrete bridge that spans the railroad tracks for an excellent view.

Visitors can access this viewpoint from the parking area near Piper Creek or a smaller parking area off Olympic Boulevard. The trail quickly connects to the concrete bridge over the railroad tracks, leading to the panoramic viewing platform. Here, a spiraling staircase leads down to a small beach area. The beach and viewing platform are some of the top places to visit in Everett to watch the sun fall behind the distant Olympic Mountains.

Everett is in a prime location for exploring some of Washington’s best national forests. Mount Baker-Snoqualmie National Forest spans the entire Cascade slopes immediately east of the city, up to the Canadian border. On the other side of Everett and Puget Sound, Olympic National Forest offers similarly rugged environments.

One of the central adventure routes from Everett is Highway 2, heading east toward Leavenworth. Trailheads and scenic rest stops line this potentially busy highway passing through Mount Baker-Snoqualmie National Forest. And after hitting Stevens Pass, one of Washington’s best ski resorts, the route continues on the opposite side of the crest through Okanogan-Wenatchee National Forest.

Interested explorers can access Olympic National Forest from Everett with two ferry rides and a scenic drive across Whidbey Island. Upon reaching the Olympic Peninsula, the national forest comprises only a tiny fraction of the wild public land to explore. The rest belongs to Olympic National Park, which covers the center and heart of the mountainous peninsula.

Seattle is 25 miles south of Everett, making day trips an easy endeavor. And due to its lower cost of living, thousands of Everett residents make this trip for work each day. Because of this, the commute can range from 30 minutes to 90 minutes, depending on the time of day. Public buses are also available, taking just over an hour depending on the final destination within the city.

Seattle has more than enough to do to fill the day. Between dozens of museums, parks, and beaches, and all the tourist attractions concentrated at places like the Seattle Center, a day trip only makes a tiny dent in experiencing the city. 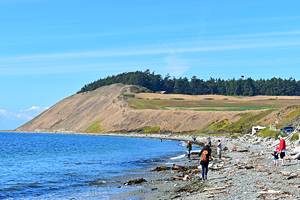 14 Top-Rated Attractions & Things to Do in Bellevue, WA