Experienced travelers know that Washington's national forests are the place to find the best adventure. These massive public lands abound with alpine landscapes and waterfalls and span both sides of the Cascade Mountains. They also encompass other intrepid regions, including the Blue Mountains and the Olympic Peninsula.

Recreation is endless in Washington's national forests, and adventures span the year. Just a few popular things to do include hiking, fishing, and downhill skiing. Other escapades include mountaineering, rainforest exploring, and admiring a massive crater left behind by a 1980's volcanic eruption.

Find your next favorite Pacific Northwest adventure with our list of the best national forests in Washington.

Mt. Baker-Snoqualmie National Forest encompasses the rugged western flank of the Cascade Mountains, from the Canadian border down to Mount Rainier. It's one of the most visited forests in the country, thanks to its proximity to Seattle and every other city on the northern Interstate-5 corridor. The magnificent landscapes and terrain in Mt. Baker-Snoqualmie also lend to its popularity.

Perhaps the most prominent aspect of the forest is the 10,781-foot-tall Mount Baker. This photogenic mountain is close to the Canadian border and offers an admirable summit climb for experienced mountaineers. The mountain is also home to one of Washington's best ski resorts, Mount Baker Ski Area, with an average 150-day season and over 1,000 acres of terrain.

The summer season doesn't skimp on outdoor recreation either. A staggering 1,500-plus miles of trails wind throughout the forest, offering new routes to explore every day of the year. Just a few of these miles include two designated National Recreation Trails. The Pacific Crest Trail heads north and south through the forest. And the Pacific Northwest Trail navigates east and west near the Canadian border.

Other recreation options run rampant throughout the forest. Visitors also venture into Mt. Baker-Snoqualmie to fish, climb, camp, and ride horses. The forest is also popular for scenic drives. It's a postcard view on about every road traveled, but for a specific route to follow, try the Mather Memorial Parkway along the eastern boundary of Mount Rainier National Park.

Gifford Pinchot National Forest encompasses over 1.3 million acres in southwest Washington. It's one of the oldest national forests in the country, established in 1897 as part of the Mount Rainier Forest Reserve. It was eventually set aside as its own forest unit, and in 1909, renamed after the first chief of the U.S. Forest Service, Gifford Pinchot.

The forest surrounds and oversees Mount St. Helens National Volcanic Monument. It also serves as the southern border of Mount Rainier National Park. And the western flank and summit of Mount Adams are also within the forest, surrounded by the Mount Adams Wilderness.

Exploring these significant mountain landscapes is the top thing to do in Gifford Pinchot National Forest. The Mount St. Helens National Volcanic Monument itself encompasses over 110,000 acres and 200 miles of hiking trails.

The nation-spanning Pacific Crest Trail also makes a memorable trek through Gifford Pinchot. The highlight reel begins on the west flank of Mount Adams within the Mount Adams Wilderness. From here, the trail extends to Goat Rocks Wilderness, where one of Washington's best hiking trails offers stunning views of Rainier in the distance.

The Lewis River Recreation Area is another fun spot to check out in Gifford Pinchot. This designated playspace spans 14 miles along the Lewis River, offering several ways to enjoy the water. Perhaps the most popular recreation outlet is the Lewis River Trail, which follows the banks with several waterfall views.

In 2000, Okanogan and Wenatchee National Forests combined into one administrative unit. And today, Okanogan-Wenatchee is the largest national forest in the state. It encompasses approximately 3.8-million acres, stretching from the Canadian border down to the foothills outside of Yakima.

The forest encompasses much of the eastern slopes of the Cascade Mountains. The east boundary stretches through the foothills into high-desert shrub-steppe terrain. And the western edge is the Cascade Crest, where high mountain peaks dominate the horizon. These contrasting landscapes give the forest an incredible range of diversity in flora, fauna, and recreation.

The forest borders Mount Rainier and North Cascades National Parks and offers a less-crowded alternative to these popular places to visit. But with proximity to major metropolitan areas like Seattle, the forest also attracts crowds, especially at some better-known spots.

One such popular area to explore is the Methow Valley. This charming region follows the Methow River from Pateros to the North Cascades Crest. In this region, towns like Methow and Winthrop are very tourist-friendly, offering all types of guided excursions and ways to explore the forest.

Farther south, near the Bavarian-themed town of Leavenworth, the Alpine Lakes Wilderness is also a popular place to explore the forest. This area of high-mountain splendor attracts outdoor enthusiasts from across the world. The Alpine Lake Wilderness is home to the Enchantments Permit Zone - a true backpacker's dream come true. Permits are required to backpack into the Enchantments.

Olympic National Forest circles much of Olympic National Park on Washington's western peninsula. In total, including the national park, the peninsula has more than two million acres of public land to explore. The national forest accounts for over a quarter of that public domain.

The peninsula offers some of the most diverse environments in the nation. Habitats in the Olympics range from temperate rainforests to rain-shadow cities like Sequim. Other prominent landscapes include rugged beaches and the snow-capped Olympic Mountains.

The collection of trails known as the Quinault National Recreation Trail System is an excellent place to explore the forest. This lush trail system includes the family-friendly Quinault Rainforest Nature Trail, lined with interpretive information. The trail system is on the south side of the park.

Though densely beautiful, Colville National Forest sees fewer crowds than other public lands in Washington. That's because it's not as near to major population areas on the west side of the state. Some of the closest places to Colville, and great basecamps for exploring the forest, include cities like Kettle Falls and Republic. Colville National Forest is also home to some of the best campgrounds near Spokane, with the city less than 80 miles away.

Recreation within the forest includes fishing, hunting, mountain biking, horse riding, and stargazing. Hiking and backpacking are also popular, with over 480 miles of trails to explore. And the forest transforms come winter into a wonderland of snowmobiling, cross-country skiing, and snowshoeing.

For those looking to explore a pristine environment within the forest, head to the Salmo-Priest Wilderness. This designated natural space encompasses over 43,000 acres of untouched terrain in the state's far northeast corner. It's a backpacker's dream within the wilderness, with trails like the Shedroof Divide Trail offering panoramic views.

Umatilla National Forest encompasses over 1.4 million acres within the Blue Mountains of northeast Oregon and southeast Washington. It covers a variety of terrain, with elevations ranging from 1,600 to 8,000 feet above sea level. Landscapes in this geological-rich region include rolling uplands and V-shaped valleys.

Umatilla and "the Blues" are well known throughout the region. Still, they are otherwise less explored than other public spaces in the state, and recreation opportunities await throughout the year. Popular things to do in Umatilla include backpacking, hiking, and horse riding. Other activities like camping and picnicking are also popular.

River activities also define much of the fun of Umatilla National Forest. Three designated Wild and Scenic Rivers run through its boundaries, including the Grande Ronde, the Wenaha, and The North Fork of the John Day. All three rivers support activities like fishing and shoreline hiking. But the North Fork of the John Day River is the one that attracts river enthusiasts from across the world.

The forest also has three designated wilderness areas within its boundaries. In total, these untouched landscapes comprise over 20 percent of the forest's acreage. The Wenaha-Tucannon Wilderness is the only one within Washington, encompassing over 175,000 acres. Here, ambitious backpackers find over 200 miles of trails to explore.

For a memorable drive through the forest, head to the Blue Mountain Scenic Byway. The western terminus for this 145-mile route starts near the Columbia River and the Washington Border. It heads southeast from here, traveling throughout the best of the Blue Mountains and northeast Oregon.

Though it's not a national forest, the Forest Service manages Mount St. Helens National Volcanic Monument in Gifford Pinchot National Forest. This unique monument was created in 1982, two years after the mountain produced the most dramatic eruption in modern history. Today, the monument strives to protect this rebounding environment and showcase its many unique geological wonders.

Thousands of interested visitors come to Mount St. Helens every year, and it's well worth the visit. The monument is generally split between the mountain's west, south, and east sides. The harder-to-access Mount Margaret Backcountry occupies the north side.

The west side of the mountain, closest to Seattle, is home to the Johnston Ridge Observatory. This roadside attraction offers detailed information about the May 18th, 1980 eruption, alongside spectacular views of the crater left behind. At the Observatory, hikers can also head on the Boundary Trail for even better perspectives.

On the south and east sides of the mountain, places to visit include lava tubes, hummocks, and a Windy Ridge with another grand view. The mountain's south side is also home to the Climber's Bivouac Trailhead - the starting spot for the most popular summer summit route to the top of the mountain.

Washington's national forests span so much of the state, the best way to experience the most in one trip is to spend the night camping. And options to pitch a tent or park an RV are aplenty. Camping in any national forest is typically separated into two categories: developed and primitive.

Primitive Camping: Primitive camping, also known as Dispersed Camping, is setting up camp in the national forest outside of a developed campground. This type of camping is generally free and has no amenities like potable water or bathrooms. Often, primitive camping takes place on the side of a gravel Forest Service Road. Campers are encouraged to use already trodden spots when selecting a site. Contact the Ranger Station for additional information. Primitive campers need to pack out everything they bring into the forest. 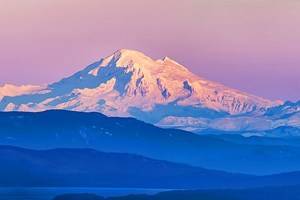 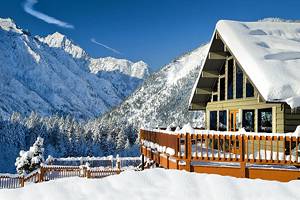