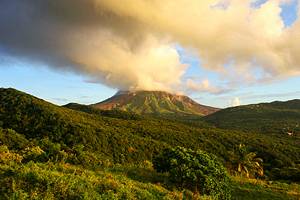 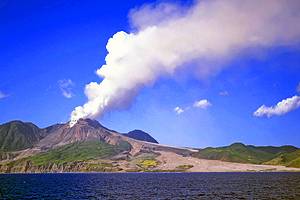 Montserrat is a unique place to photograph. It was once similar to its neighboring Leeward Islands of St. Kitts and Antigua, a paradise with green hillsides and coconut-tree-lined, white sandy beaches. But, Mother Earth had other plans. After enduring devastating effects from being in the eye of Hurricane Hugo in 1989, the British overseas territory took another hit six years later when Soufrière Hills volcano began erupting after lying dormant for centuries.

In the years of volcanic activity that followed, the capital city of Plymouth became buried under mud and ash, and large swaths of land in the lower two thirds of the island were declared uninhabitable. Many fled and rebuilt their lives in the U.K. Tourism inevitably suffered, as large parts of the island have been cordoned off for visitors.

Today, only the northwest corner, which was not impacted by the volcano, is thriving, and day tours to the Exclusion Zone are allowed to see the perpetrator of the island's cataclysmic event and experience the desolation that surrounds it. The population of the island is now around 5,000, and most rely on income generated from geothermal energy and sand mining.

For intrepid travelers visiting Montserrat, there are opportunities to hike and go bird-watching in the unaffected areas, dive and snorkel the clear waters, and enjoy a slower pace of life. Photographers have a rare opportunity to witness the destruction firsthand, capture scenes of abandoned hotels and cottages reclaimed by nature, and share the story of the inimitable island that's rising from the ashes. Montserrat can be accessed via a short flight or ferry from Antigua.

The former capital of Montserrat was destroyed by the pyroclastic flows of hot rock, mud, and ash during the eruption of the Soufrière Hills volcano in 1995 and the years that followed. Once a charming city with a bright future, it now lays silent, buried in mud, akin to Italy's Pompei. Thankfully, no humans were harmed.

On an Exclusion Zone Tour through Sun's Montserrat Island Tours, visitors can enter the haunting city of Plymouth and get an up-close look at the devastation. The tours are subject to seismic and weather conditions.

The mighty Soufrière Hills Volcano soars 3,440 feet and began erupting in 1995 after being dormant for more than 500 years. Its activity is monitored by the state-of-the-art Montserrat Volcano Observatory (MVO), located in Flemings, Salem.

The observatory was set up soon after the volcano became active and continues to monitor its every hiccup. A short documentary by local filmmaker David Lea shows live footage of the eruptions and their aftermath. The observatory has a terrace with views of the volcano, and a visit is often included in a tour of the Exclusion Zone.

Soufrière Hills Volcano is in the Exclusion Zone that takes up half the island, and visitors are allowed on police-escorted guided tours. A walk up the hills nearby provides a chance to see former villages and the devastated city of Plymouth. Get an aerial view of the volcano and its surroundings on an Emerald Isle helicopter tour that takes you on a 20-minute ride over the coast of Montserrat and the nearby Redonda island.

Rendezvous Bay Beach is the only golden-sand beach on the island of Montserrat. The bay, located on the northwest coast, is ideal for swimming and snorkeling. The crescent-shaped beach tucked under cliffs is accessible by a strenuous 20-minute hike from Little Bay or a boat or kayak ride. Kayak rentals are available at Little Bay.

The coral reefs around the island have flourished since the volcanic eruptions, and now provide home to a brilliant array of fish, rays, turtles, and other marine life. Dive shops like Scuba Montserrat and Montserrat Island Dive Centre located in the town of Little Bay offer excellent diving tours.

The Oriole Walkway Nature Trail is among the more popular hikes on the island, offering hikers a chance to immerse themselves in the rainforest and search for sightings of the rare Montserrat oriole, the national bird. The trailhead to the two-kilometer path starts from the Hilltop Coffee House and winds its way up to Lawyer's Mountain.

The Centre Hills Forest Reserve is known for its biodiversity. Many species of birds call this area home, and visitors get a chance to spot the threatened oriole on hikes. Among other birds that can be spotted are the purple-throated carib, mangrove cuckoo, forest thrush, bridled quail dove, and the Montserrat galliwasp. The area is also home to two bat species: the yellow-shouldered bat and white-lined Bat.

The black-sand Woodlands Bay Beach is a popular spot with a picnic area set atop a cliff overlooking the rocky beach and the crashing waves. The cliffs offer a great vantage point to view migrating whales.

14 Best Places for Shopping in Istanbul
BE INSPIRED