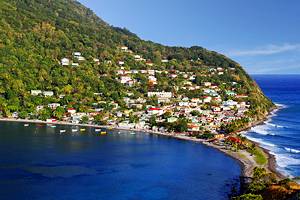 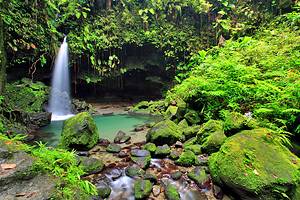 A still off-the-beaten-path natural paradise, Dominica is known as "The Nature Island of the Caribbean" and is certainly a picture-perfect place to photograph. Although it has a few gold-sand beaches, most of this volcanic island's beaches are of the black-sand variety. And Dominica is more known for its dramatic interior landscape, where you can hike to boiling lakes and waterfalls with emerald pools.

The highest mountains in the Eastern Caribbean are located in Dominica, and the island is filled with lush, green rain forest terrain. Offshore, more beautiful photographs can be found underwater, where there is excellent diving and snorkeling. Here are our pics for the best places to photograph in delightful Dominica.

Beautiful Soufriere Bay, on Dominica's southwest coast, is one of the prettiest places to photograph in Dominica and features deep-blue-meets-clear-turquoise-water, gold-sand beaches and lush vegetation. There are also two villages on this bay: Scott's Head and Soufriere.

Dominica's capital city, Roseau, pictured here, is on the country's southwest coast. It is a vibrant and colorful city where you'll find 18th-century Creole buildings and a cobblestone Old Market area. There is also a port that accommodates cruise ships.

In the village of Soufriere on the southwest coast, the colorfully painted Soufriere Church, pictured above, is very photogenic with its turquoise and red hues. The Catholic Church was built from volcanic stone in the 18th century. It sits right on the bay.

One of the most visually stunning natural attractions in Dominica is the Emerald Pool, pictured here. The waterfall and bright green pool are part of the equally impressive Morne Trois Pitons National Park. The park covers a good portion of the island's mountainous, primordial rainforest interior.

On the three-hour hike to Boiling Lake, you'll have to climb the Stairway Pathway pictured here. It is also worth a pause for a few photos, as the steps juxtaposed against the lush green jungle make for a beautiful shot.

Overlooking Soufriere Bay, about an hour's drive south of Roseau, Scotts Head is a charming little fishing village that is also known as the jumping-off point for many diving and snorkeling excursions around Dominica. Most dives start at Swiss Cheese, a large rock formation that is home to a passage packed with solider fish.

Inside Morne Trois Pitons National Park, this gray-green bubbling lake is reached after a strenuous hike through thick rainforest that takes about three hours. The water is literally boiling, so you can't swim here, but it is quite the sight to photograph.

Getting to Wavine Cyrique, a secluded and stunning black-sand beach and waterfall pictured here, is not for the faint of heart. It requires basically climbing down the side of a thick jungle cliffside to reach. You'll scramble down holding onto ropes and using a series of ladders, and there are also roots and vines to grab onto should you need a little extra help. It is highly recommended you pay for a local guide to lead you. Note that after you reach the waterfall, you have to climb back up.

Take a boat ride down the Indian River, Dominica's wildest river, which flows between the town of Portsmouth and the Caribbean Sea. Floating down it is one of the top attractions in the country and a very photo-friendly experience. This picture was snapped near Roseau, and the green of the trees reflected in the murky water makes for a great nature shot.

These twin waterfalls are known as the Mother and Father, and hiking to them is one of the top adventure attractions in Dominica. The hike is easy - about 15 minutes through a scented trail of ginger and vanilla plants. At the base of the waterfalls is a hot mineral-spring-fed pool that you can soak in.

Scotts Head Pinnacle is one of the most famous dive sites in Dominica, accessed via the town of Soufriere. The dive takes you through a grotto passage that is filled with soldierfish, among other species, pictured here. It is an intense and amazing dive experience, where the fish really get in your face.

Officially known as the Cathedral of Our Lady of Fair Haven of Roseau, this Roman Catholic cathedral (pictured above) in Dominica's capital city was constructed around a century ago in Gothic Romanesque Revival style.

In Cabrits National Park, Fort Shirley is what remains of an 18th-century British base. Here, you will also find pretty views of Prince Rupert Bay. The national park is also home to lush green rainforest, as well as swamps and black-sand beaches.

Some of the best diving and snorkeling in Dominica is found around Champagne Reef, which is in a marine reserve off the southwest coast. Here, you can see all sorts of marine life, including tropical angelfish like the ones swimming here. There are also batfish, barracuda, sea horses, and squid all in the vicinity. 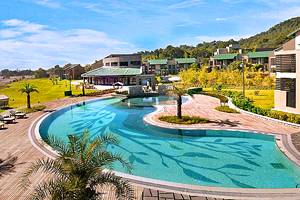