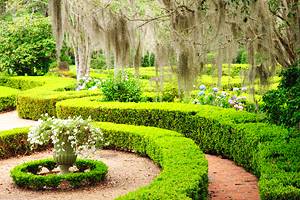 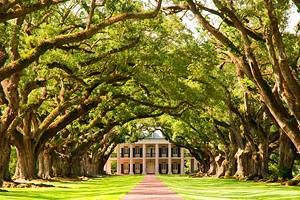 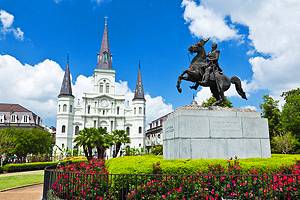 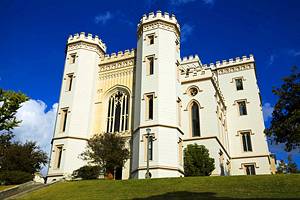 Baton Rouge, the Louisiana state capital, sits picturesquely along the Mississippi River. If you have some time to soak up the sights and enjoy the attractions, particularly in the spring or fall when temperatures are perfect, you'll find plenty of things to do to keep busy.

The city is home to the destroyer USS Kidd, part of the USS Kidd Veterans Memorial, one of the city's must-see sites.

The handsome old mansions, including Magnolia Plantation (1791), one of the oldest in the area, and the State Capitol Building are worth seeing.

For other fun things to do, check out some of Baton Rouge's museums and cultural attractions, like the LSU Rural Life Museum, that provides insight on the region's rich history.

Outdoor recreation is also easy to find in Baton Rouge – places like the Bluebonnet Swamp Nature Center are a good place to look for an adventure.

Discover more interesting places to visit with our list of things to do in Baton Rouge.

See also: Where to Stay in Baton Rouge

The Old State Capitol building is a striking Gothic-Revival castle that was built in 1847. It is noteworthy both from a historical and architectural perspective, and is worth a look, even if just from the outside.

The castle was burned by the Union Army, and in 1882, it was repaired and served as the state capitol until 1932, when the new State Capitol building opened. This eye-catching structure standing high on a bluff over the Mississippi River is now a museum of political history.

The museum offers a number of good exhibits that include The Legacy of Huey Long, The Governors' Portrait Gallery, Baton Rouge and the Civil War, and several others. The Old State Capitol hosts various events and can be rented out as a venue for weddings and other occasions.

A short walk from the State Capitol building is the USS Kidd Veterans Memorial. This attraction centers on the destroyer USS KIDD, named after Rear Admiral Isaac Campbell Kidd, Sr., who was killed on the USS Arizona during the 1941 attack on Pearl Harbor.

The ship was launched in 1943 and was nicknamed the "Pirate of the Pacific." The stories of its long and interesting history before it was decommissioned in 1964 are told on board. The ship has been used in several movies over the decades, as well as historical documentaries. Today, visitors can climb aboard to see the USS KIDD for themselves and learn all about its past.

The USS Kidd Veterans Memorial complex also consists of an observation tower and museum. This Historic Warship & Nautical Center has many one-of-a-kind artifacts, a model ship collection, and a miniature replica of the Vietnam Veterans Memorial Wall found in Washington D.C.

The Louisiana State University was established in 1860 near Alexandria, and in 1869, it was moved to Baton Rouge. In 1926, the university moved to its current location. Some of the highlights include the LSU Rural Life Museum and the LSU Museum of Natural Science.

American Indian mounds, located on the grounds, are believed to be more than 1,600 years old. Popular athletic programs and venues on the LSU campus include baseball at Alex Box Stadium/Skip Bertman Field and football at the LSU Tiger Stadium.

The Louisiana State Capitol in Baton Rouge was built in the early 1930s. This landmark structure stands 450 feet high with 34 floors. The limestone on the exterior is adorned with many symbolic images representing the state, and the marble of the interior matches well with the ornate furnishings throughout the building.

Flanking the exterior stairs are two groups of statues: The Patriots, an armored soldier and the mourners of a warrior slain in battle; and the Pioneers, a robed woman surrounded by settlers.

The construction of the State Capitol was the result of efforts by Huey Pierce Long, a Louisiana governor, who would eventually become a member of the U.S. Senate. He fought hard to have the structure built, succeeded, and was later assassinated in this same building.

Huey Pierce Long is buried on the grounds, where you'll find his memorial. Consider taking the building tour, which includes a ride up an elevator to an observation deck for views out over the city. The Louisiana State Capitol is listed on the National Register of Historic Places.

Magnolia Mound was built in the last half of the 18th century and shows the architectural influences brought by early settlers from France and the West Indies. Throughout the years, the home has been owned by a variety of different people who took the liberty of making their own alterations and extensions.

The home, a wooden structure of bousillage construction, still maintains much of its 18th- and 19th-century appearance. It is surrounded by old oak trees. The property was expropriated by the city of Baton Rouge to be maintained as a historical symbol of an earlier age.

Today it is listed on the National Register of Historic Places and open to the public for tours. The property includes almost 15 acres, consisting of the main house and several other buildings.

Ten different flags have flown over Louisiana. The LSU Rural Life Museum presents the lifestyles and cultures of pre-industrial Louisiana. Highlights include Louisiana Folk Architecture, a collection of seven buildings that illustrate the various cultural influences of Louisiana's settlers; The Barn with items from prehistoric times to the 20th century; and The Working Plantation, a complex of buildings furnished to reconstruct the activities of life on a 19th-century working plantation.

The museum grounds are 25 acres in size and contain 32 historic buildings. Some of the highlights of the Folk Architecture are a church, cabin, Acadian house, and potato house. Tours are generally self-guided, but docent-led tours may be arranged in advance.

Located on 103 acres on the southwest side of the city, the Bluebonnet Swamp Nature Center provides research and education resources in a natural setting. A mile of gravel paths and boardwalks winds through the conservation space, leading to distinct areas of the park, like a cypress-tupelo swamp and hardwood forests.

As well as the wildlife-watching opportunities along the trail, you can get up close to animals in the 9,500-square-foot Exhibit Building. The building also features information related to the flora and fauna of the region, mineral and artifact displays, and an extensive waterfowl decoy carving collection.

BREC's Baton Rouge Zoo is home to both exotic and domestic animals. Among the collection are large cats, rhinos, otters, fish, reptiles, and amphibians of Louisiana in the L'aquarium de Louisiane.

Check out the Parrot Paradise with rare and colorful birds from the tropics, including parrots and macaws. The Realm of the Tiger is a more recent addition, with tigers and other Asian animals. The Flamingo Cove and Giants of the Islands exhibits feature Chilean flamingos and Galapagos and Aldabra tortoises.

The KidsZoo is another popular area with barnyard animals and tunnels for kids to play in. Neighboring this is the Safari Playground with a variety of equipment.

9. Shaw Center for the Arts

Encompassing an entire city block and overlooking the Mississippi River, this multi-faceted art facility was built in 2005 and has since hosted thousands of cultural events. Within the Shaw Center, the Manship Theatre showcases international talent with music, dance, and performance acts.

The Theatre hosts live simulcasts of other theater productions from around the world as well. The LSU Museum of Art is also within the facility and features a wide collection of visual arts ranging from ancient Chinese jade sculptures to regional portraits and drawings.

The Louisiana Arts & Science Museum features a mix of art and science, with a little something for both adults and children. The art galleries offer both changing exhibits and a permanent collection of fine art. Some of the highlights include American and European art, ethnographic art, modern and contemporary art of Louisiana, photography, and antiquities.

The science portion of the museum, targeted towards children and families, is a fun area with interactive, education based displays. This is a place where children are provided interesting ways to learn about the world around them.

Also of interest is the creatively laid out Ancient Egypt Gallery, with mummies and other artifacts, and an on-site Planetarium. The building that houses the Louisiana Arts & Science Museum is a lovely old railroad depot located along the Mississippi River.

Guided tours are available of this historic residence and past home of nine governors and their families, and they include a peek at the many original furnishings and decorations throughout.

If you've ever wondered where the term Cajun originated, be sure to swing by the Capitol Park Museum. Inside, you'll find everything you could possibly want to learn about the state of Louisiana. Extensive displays on the history and culture of the state will make the hours fly by.

Several of the most interesting displays include a 48 foot-long shrimp trawler and a two-row sugarcane harvesting machine along with an oil rig and Civil War era submarine. Cultural highlights include Louis Armstrong's bugle, and a polka dot Stratocaster guitar once played by the jazz artist Buddy Guy.

One of the most colorful exhibits is the Mardi Gras display; the Golden Age of Aviation has several vintage aircraft that you can see up close. The movie detailing the 1932 Cleveland Air Races is a technical marvel with special effects that should not be missed.

Where to Stay in Baton Rouge for Sightseeing

To get a real flavor and feel for this friendly Cajun city, it's best to stay right downtown. Baton Rouge's vibrant city center is about one square mile, bordered to the north by the Louisiana State Capitol, to the south by the USS Kidd Veterans Museum, and to the west by the Mississippi River. This is where many of the major attractions are found, along with restaurants and plenty of things to see and do. Below are some highly rated hotels in convenient locations: 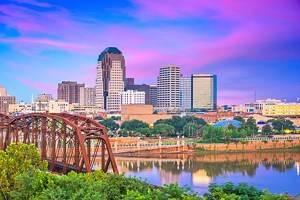 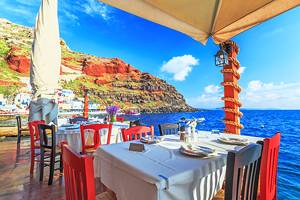 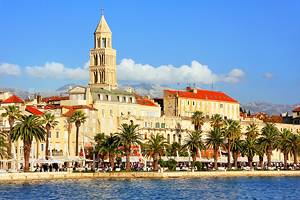 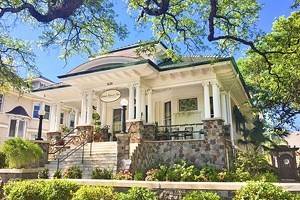 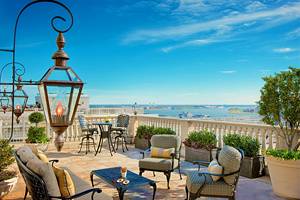 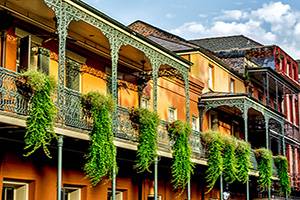 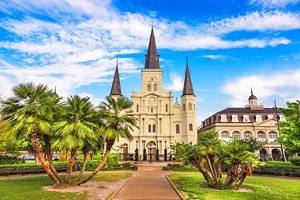 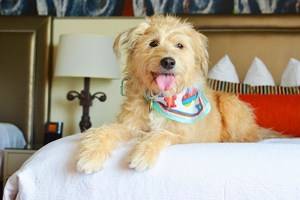 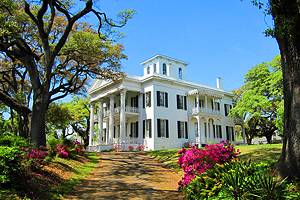 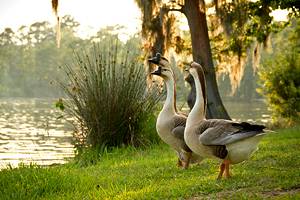 12 Top-Rated Tourist Attractions & Things to Do in Lake Charles 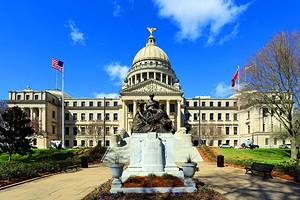 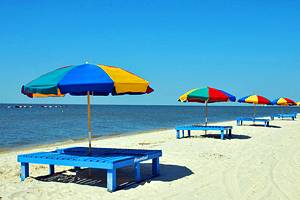 15 Top-Rated Attractions & Things to Do in Mississippi 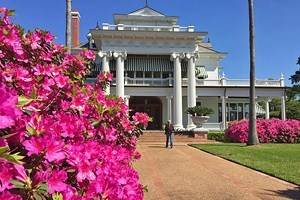 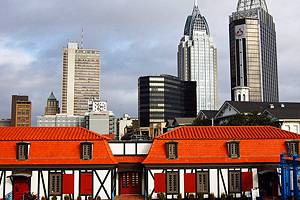 15 Top-Rated Attractions & Things to Do in Mobile, AL
Recent Articles