12 Best Beaches near Portland, OR

Portland has a wide selection of beaches to enjoy some sunny weather. They range from in-town beaches on the Willamette and Columbia Rivers to spots on the Pacific Ocean less than two hours away. They also include local favorites like the long stretch of shoreline on Sauvie Island just northwest of the city.

Portland is also less than 100 miles from the Pacific Ocean, and it's near some of the best small towns on the Oregon coast. This proximity includes iconic spots like Cannon Beach and Seaside, built upon generations of family beach vacations.

River beaches in Portland contain risks like currents, steep drop-offs, and wakes from passing motorboats. Life vests are recommended when entering the water. Swimmers enter the water at their own risk.

Enjoy a beautiful day in the sun with these best beaches near Portland.

Sauvie Island is approximately 10 miles north of the city, making it a popular getaway from Portland.

It's the largest island in the Columbia River and one of the largest river islands in the nation. The island is approximately 15 miles long and four miles wide, encompassing over 24,000 acres.

Sauvie Island is quiet compared to the city, and is defined mainly by rural farmland and wildlife refuge. And on the island's north and east coasts, along the Columbia River, several popular beaches attract crowds of city-dwellers on the hot summer days.

The most popular access point is Walton Beach, also called Sauvie Island Beach. It's located approximately 12 miles from the Sauvie Island Bridge–the only road onto the island. Parking is on the other side of NW Reeder Road from the river. Daily or annual parking permits are required.

Walton Beach is long, wide, and slightly sloped toward the water. Visitors enjoy swimming here, although the bank drops off dramatically. Life vests are highly recommended. No lifeguards are on duty.

Dogs are welcomed on leash only.

Collins Beach is another popular stretch of sand on the Columbia River on Sauvie Island. It's just north of Walton Beach (Sauvie Island Beach) on NW Reeder Road and has one important distinction–portions of the beach have been clothing optional since the 1970s.

Collins Beach is approximately a mile long, and starts shortly after Reeder Road turns to gravel. Respectful visitors are welcome to enjoy every bit of sunshine they can find (don't forget the sunscreen).

Not all the beach is clothing-optional, and markers on the beach delineate where clothing can come off.

Sellwood Riverfront Park is on the Willamette River, south of downtown Portland, near the Sellwood Bridge.

The nine-acre park stays popular throughout the year, primarily as a fun place to let the dogs run free. But, during the summer, its long stretch of river beach draws the crowds.

A boat dock juts out from the main beach access at Sellwood, only a short walk from the off-street parking area. The shoreline extends north from there, with several available spots to post up and spread out a towel.

The lush backdrop to the beach provides shade, while other spots are wide open and perfect for sun-tanning.

The Willamette River is safe to swim in, though currents and wakes from powerboats on the water get stronger farther from the bank.

No lifeguards are on duty, and life vests are recommended for inexperienced swimmers. Also, expect to encounter unleashed dogs on the beach.

Poet's Beach is a small sliver of sand on the west side of the Willamette River near downtown. It's located under the Marquam Bridge (I-5) in the city's South Waterfront Park–the southernmost section of the Tom McCall Waterfront Park revitalization.

In the summer when water levels are low, this engineered shoreline is a popular place to soak in the sun and swim in the river.

The beach opens to a swimming area marked by swim lines and floats. The water depth is pretty shallow in this delineated swim area. However, currents do exist, and no lifeguards are on duty. Visitors enter the water at their own risk. The water is comfortable throughout summer but can reach shivering temperatures throughout the rest of the year.

It's a short walk on a paved trail from the river landing to the beach. It's not an ample space, and on almost any hot and sunny day in the summer, expect the beach to feel crowded. Arrive early to claim a spot.

The park has a significant history among native populations and later as the center of the town's iron industry. Today, the park encompasses 26 acres on the Willamette River, including a small but worthy beachfront.

Some say the beach at George Rogers Park is a hidden gem, but it doesn't always appear that way on hot and sunny summer weekends. Local families and southside Portlanders flock to the sand, dotting the relatively small beach. But with plenty of other park amenities nearby, there tends to be enough space to let the kids run free.

Other popular activities at the park include pickleball, playground exploring, and visiting the historic Oswego Iron Furnace.

Broughton Beach is on the northeast side of Portland, next to the Columbia River and NE Marine Drive.

A large parking area facilitates the crowds that tend to gather. Alternatively, the beach is a popular bicyclist destination for those utilizing the paved bike trail next to NE Marine Drive. Either way, the approximately half-mile beach accommodates every traveler that arrives.

Swimming is fine at Broughton Beach, though currents and waves from passing water traffic intensify farther away from shore.

Restrooms and drinking fountains are available at the beach. Dogs are asked to be left at home when visiting Broughton Beach.

Kelley Point Park encompasses the peninsula at the confluence of the Columbia and Willamette Rivers, at the far northwest edge of city limits. The peninsula has sandy real estate on both rivers, with plenty of space for small groups and families.

The unpredictable currents and passing motor traffic makes for unsafe swimming conditions at Kelley Point. The city discourages anyone from entering the water. But, with an expansive shoreline, it's the perfect location to set a towel down and bask in the sun.

Behind the beach, the park encompasses approximately 100 acres to wander. Paved and unpaved trails meander throughout this acreage, offering several avenues for exploring. At a minimum, visitors to the beach must walk 100 yards from the parking area.

Wintler Community Park is on the opposite bank of the Columbia River in Vancouver, Washington.

It's a 12.5-acre park with an expansive beach and other amenities like picnic tables and hiking trails. The park is popular for sunbathing, exploring the wooded landscape, and taking refreshing dips into the water.

Wintler Community Park Beach is on the eastern end of the Columbia River Renaissance Trail. This signed and paved trail extends from Fort Vancouver, another of Vancouver's most popular tourist attractions, near downtown and along the river's edge.

Cannon Beach and Seaside are two quintessential beach towns on the Oregon coast–and two of the closest to Portland.

They are less than 10 miles from one another on the northern Oregon coast, and an approximately 80-mile drive on Highway 26 from Portland. Both towns have a long and storied history of hosting visitors, and offer some of the top things to do on the Oregon Coast.

Head to Seaside for downtown amusements and a historic ocean Promenade. Seaside is also acclaimed for its wide and accommodating beach with an impressive backdrop of Tillamook Head.

The sheer size of Seaside Beach lends to several activities and organized events throughout the year, including one of the largest amateur volleyball tournaments in the world.

Cannon Beach is also one of Oregon's top places to visit, offering similar tourist attractions and plenty of hotels and local restaurants. Its beach is also extensive and accommodating.

However, the city's most prominent feature is the eye-catching Haystack Rock jutting from the shore. This 235-foot monolith dominates the sightline and provides a scenic backdrop.

Fort Stevens State Park is one of the most popular state parks in Oregon. It's on the far northwest tip of Oregon, on the other side of Young's Bay from picture-perfect Astoria. Visitors from Portland reach this expansive state park with a 90-mile drive or an approximately two-hour commute.

Fort Stevens is a decommissioned military fort that operated between the Civil War and World War II. Today, it's a sprawling 4,300-acre state park with military remnants, hiking trails, and one of the largest campgrounds on the coast.

Fort Stevens is also home to a shoreline with miles of different activities available. The beach at Fort Stevens is popular for clamming, fishing, beach walking, and simply admiring the wake.

The beach is also home to the photogenic Peter Iredale shipwreck, grounded on the Oregon shore over 115 years ago.

Vehicles are allowed to access portions of the coast throughout the year.

The quaint and cozy town of Rockaway Beach is another popular ocean destination from Portland. It's reachable from the city with an approximately 90-mile drive or a two-hour commute.

The drive occurs primarily on Highway 6 as it twists and turns within Tillamook State Forest, home to some of Oregon's best hiking trails, after branching off Highway 26 from the city.

Rockaway Beach has a long history of hosting visitors, dating to when tourists used to arrive by scenic train. Today, Rockaway Beach's vacation heyday has simmered, leaving behind the big crowds and hard-to-get hotels.

Instead, Rockaway Beach has become a destination for rest, relaxation, and enjoying the coast at a slower pace.

Rockaway Beach has many things to do for tourists, including nearly seven miles of uninterrupted sand to explore. This expansive sand offers plenty of room for groups and families to claim some beach as their own.

And, every inch of the beach includes generous views of the beautiful Rockaway coastline, including the signature Twin Rocks formation in the surf.

Lincoln City is another postcard destination on the Oregon Coast, approximately a 100-mile drive from Portland. It's also a popular seaside destination from Salem, located 50 miles almost directly west of the Oregon State Capital.

And, while Lincoln City's many attractions draw a crowd, its main tourist magnet is its miles of beautiful beachfront.

Lincoln City has over seven miles of sandy beach. This shoreline is wide and welcoming and hosts all types of activities.

Everyday endeavors include sandcastle building, suntanning, and exploring the rugged landscape. A few specific spots to check out include the Lincoln City Beach Access and the photogenic Road's End State Recreation Site.

As part of the city's Finders Keepers program, visitors have the chance to find unique treasures hidden across the coastline. Throughout the year and on special "drop dates," volunteers disperse handmade glass orbs on the beaches. Visitors who find these special keepsakes are welcome to take one home. 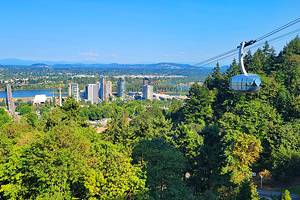 31 Top-Rated Things to Do in Portland, OR 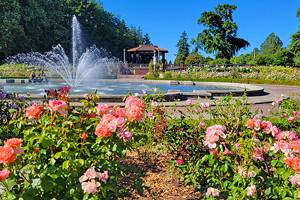 11 Best Parks in Portland, OR 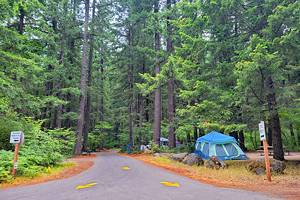 22 Most Beautiful Islands in the World
BE INSPIRED!
More Pictures of Oregon