This perfect desert oasis enchants all who visit.

Tozeur is a world apart from coastal Tunisian resorts such as Sousse and Hammamet, with a medina (old town) full of unique brick-pattern architecture and a rambling palm grove that slices a sea of green through the desert sand.

Would-be adventurers will find plenty of tourist attractions and things to do in the surrounding countryside, be it dune-bashing, hot-spring soaking, salt pan admiring, and even visiting the crumbling and surreal remnants of a Star Wars movie set just out of town.

But however you choose to spend your time, don't miss a sightseeing trip to the oases of Tamerza, Chebika, and Midès, where you can appreciate some of the most stunning scenery Tunisia has to offer.

Check out the best places to visit with our list of the top tourist attractions in Tozeur.

Tozeur's beautiful date-palm oasis is a serene and tranquil world.

Here, below the shade of outstretched palms, a series of red-dirt paths winds through a wonderland of lush agricultural land. Approximately 400,000 date-palm trees are grown in this vast desert garden.

It's a shady place for a leisurely stroll or cycle ride, and in the late afternoon, donkey and camel rides and horse-drawn carriage tours are offered through the oasis lanes.

The oasis is on the southeast side of Tozeur, accessed off Avenue Abou El Kacem Ech-Chabbi from where a number of small streets run south to the oasis.

Inside the oasis itself are six tiny hamlets that can be visited, the most important of which are Bled el-Hadder, Abbès, and Sahraoui.

Accommodation: Where to Stay in Tozeur

Known as Ouled Hadef, this is the most atmospheric part of Tozeur. Jumbles of higgledy-piggledy lanes ramble through the district, lined with traditional desert houses that sport beautiful decorative brick facades of intricate patterns.

The geometric brick designs of the houses are very similar to the age-old design motifs found on many Berber carpets. This Tozeur-style architecture is made from local kiln-fired clay or mud bricks and can also be found in neighboring desert towns.

Frequently, the upper floors of the houses extend across the street to join with houses on the other side, forming covered-bridge passages between households and providing inhabitants with shelter from the harsh sun.

Stretching to the east and south of Tozeur, and with a surface area of more than 7,000 square kilometers, the Chott el Djerid is the Sahara's largest salt pan.

During winter when the rains have come, some of it has to be navigated by boat, but in summer it nearly completely dries up, leaving the salt crust with its bizarre patterns exposed, stretching on for miles to the horizon. Fata Morgana (mirages) are commonly sighted here.

It's a popular day trip from Tozeur, and one that shouldn't be missed by photographers — the surreal scenery offers the perfect opportunity for otherworldly shots.

Housed in the Koubba of Sidi Bou Aissa, Tozeur's small Folk Museum (Musée des Arts et Traditions Populaires) is home to a series of exhibits and dioramas that explain the culture and day-to-day life of traditional Tozeur households.

Some of the dioramas themselves are a tad scruffy, but the artisan work on display within them is finely crafted.

There are also rather eclectic collections of Roman columns and fragments of statues on display, as well as local craft products, furnishings, coins, pottery, jewelry, wedding costumes, and Qur'anic inscriptions.

Unlike many other Tunisian towns, the division between the old town and new town section of Tozeur isn't marked.

In the new town, the traditional geometric brick designs continue to be used on many of the buildings.

The hub of the new town is Place Ibn Chabbat, named after the 13th-century imam, who laid down the water distribution system for the Tozeur oasis.

Flanking the square is the market hall, built during the French protectorate and dominated by the minaret of the Great Mosque.

The main streets running off the square are a heaven for shoppers, with dozens of stores selling local textiles and craft-work.

One of the most popular sightseeing trips from Tozeur is a journey to the three upland oases of Chebika, Tamerza, and Midès, which owe their fertile land to vast underground water deposits tapped through a series of wells.

The oases are reached by driving through the stunning hill country of Djebel en Negueb (an offshoot of the Atlas Mountains). The scenery here is worthy of the trip alone.

Chebika was built on the site of a Roman military post called Ad Speculum and is a small village of stone and mud-brick houses sitting above the palm grove. The highly picturesque and now abandoned old village is built into the hillside behind it.

Tamerza sits on the site of the Roman station of Ad Turres and was the see of a bishop in the 6th century. Again, the old village is a rambling gem of a place that deserves exploration.

Midès sits directly on the Algerian frontier, and on the edge of two 60-meter-deep canyons, where the Roman fort of Mades once was located.

About nine kilometers north of Tozeur is the oasis of El Hamma du Djérid, where there are four small villages (El Erg, Mhareb, Msaaba, and Nemlut) and six hot springs.

The oasis has an area of approximately 700 hectares and contains 110,000 date palms.

The hot springs here have been used for medicinal purposes since the Roman period and have waters rich in mineral deposits, said to help sufferers of skin conditions such as eczema.

They are a wonderfully relaxing place to spend an afternoon soaking, whether you're there for medicinal reasons or not.

For history-fiends, the oasis is also home to the remains of a small Roman settlement.

Star Wars fans: Take a deep breath now. Out in the desert, in the area known as Onk Jemel, near Tozeur, is the abandoned film set of Mos Espa surrounded by mammoth dunes.

This is where Anakin Skywalker did his first pod racing in Episode 1 - The Phantom Menace.

It's a bizarre place, with the dome-shaped houses left to slowly wither with age, and other atmospheric pieces from the film set left in place.

You have to travel here by 4WD vehicle, which is an adventure in itself. Most Tozeur tour companies combine a visit here with a bit of dune driving to please those tourists who aren't so enamored with the site's film-buff status.

Just outside the village of Abbès is the small desert zoo and interesting botanic garden known as the Zoo du Paradis.

There is a small café, where you can sample "teas" made from various kinds of flowers local to the area.

In the hamlet of Abbès itself, is the marabout (shrine) of local holy man Sidi Ali Bou Lifa, topped by a mighty dome. In front of the marabout, which attracts a large number of pilgrims who come to pay their respects, is a large and much revered jujube tree, said to have been planted by the holy man himself.

From here, it is possible either to continue to the shores of the Chott el Djerid or to return to Tozeur by way of the hamlet of Sahraoui.

The historic Lezard Rouge (Red Lizard) train journey chugs from Métlaoui (55 kilometers northwest of Tozeur) to Redeyef (69 kilometers north from Tozeur), passing through the craggy, orange-hued cliffs of the Selja Gorge along the way.

The Lezard Rouge train is a tourist attraction in its own right — the rolling stock dates from 1910, and the carriage interiors have not been modernized. First-class carriages are ornate, with velvet seats and varnished wood-panel interiors, while second-class carriages have their original wood seating.

The train route rolls at an extremely slow pace through the desert mountain landscape with a couple of stops for photos along the way. The entire journey takes around three hours.

Unfortunately, the Lezard Rouge doesn't run regularly (and some years doesn't run at all), so you need to confirm locally that the train is working before making the journey out here.

Photographers should beeline to Belvédère Viewpoint for the best views over Tozeur. This boulder pile is at Ras el Aioun, just three kilometers west of town, right on the edge of the oasis.

From here, at sunset, you can get great shots over the desert glowing orange as the sun sinks over the town, oasis, and vast stretch of Sahara sand beyond.

The Ras el Aioun area is also known for its hot springs. If you've been hanging out in Tunisia's Sahara region for a while — and dosing up on camel rides and 4WD dune tours — a hot spring soak here is the relaxing antidote to your sandy adventures.

The hamlet of Bled el Hader, just on the outskirts of Tozeur, is believed to occupy the site of ancient Thuzuros.

In the center of the village is the 11th-century mosque of Sidi Bou Ali. The original minaret and mihrab (prayer niche) are still standing, though the actual prayer hall is a modern addition.

In the cemetery to the right of the mosque is the marabout (shrine of a Muslim holy man) of Ibn Chabbat, who created Tozeur's water distribution system.

The village itself holds a number of traditional houses with handsome brick facades, so it's worth a quick wander.

Situated between the desert and the steppe country, Tozeur must have been from time immemorial an important staging point on the caravan route from the Sahara to the northeastern Mediterranean coast.

The town is first mentioned in Roman times under the name of Thuzuros as an important bastion in the defense of the southern frontier of the province of Africa.

During the Christian period, Thuzuros continued to flourish. In the middle of the 7th century, the Arabs took the town after a long, hard struggle.

Under Arab rule, Tozeur enjoyed a long period of peace during which, as the "gateway to the desert," it developed into a key staging point on the caravan routes.

The town prospered and became an important point on the North African slave trade, with a large slave market here. Many of the town's present-day inhabitants are the descendants of these black slaves (the Haratin).

The heyday of the town was in the 14th century, when it is believed to have had three times its present population. Its wealth, however, made it the target of increasingly frequent raids by the nomads and of oppressive taxation by the Ottoman authorities who then controlled Tunisia.

As a result, economic decline began in the 15th century, and in the following century, it was visited by a devastating epidemic of cholera during which half the population died. Thus, when the French took Tozeur in 1881 without a fight, it was an insignificant little oasis town.

Thereafter, it was developed along modern European lines, though retaining its traditional style of brick architecture. 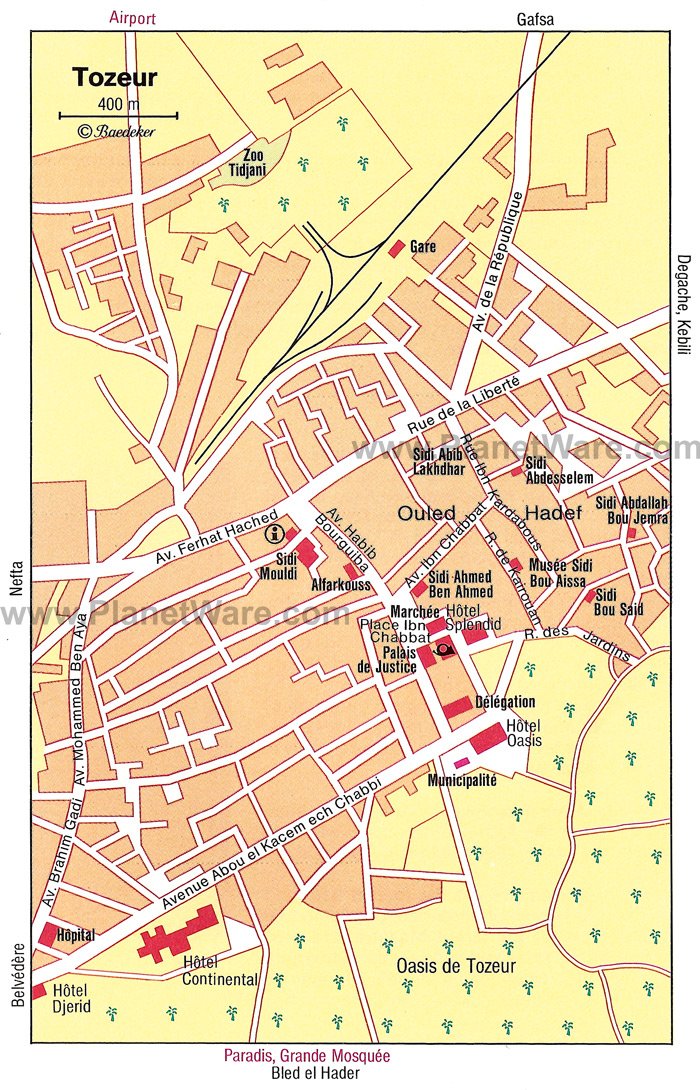