Today, Carthage is a wealthy suburb of Tunis, its villas surrounded by gardens full of red hibiscus blossoms and purple bougainvillea.

The scanty remains of the once mighty Phoenician city of Carthage lie scattered across the neighborhood.

Despite their ruinous state, touring these UNESCO World Heritage Site remnants are one of the top things to do in Tunis and definitely worth a sightseeing trip from the central city to take in the atmosphere of a glorious, long-gone past and admire their beautiful setting backed by the sea.

Because the area containing the ruins of Carthage is quite spread out, with remains and ancient monuments scattered across the neighborhood of Carthage, many people prefer to book a tour of the ruins both for the historical information a guide provides and the benefit of transport between the various sites.

The private Historical Tour of Ancient Carthage is a good option for travelers looking to optimize their time in visiting the ruins, as the tour manages to fit in four of the most important sites, including Tophet, the Punic Port, and Byrsa Hill, all in a half day.

The tour, in a private air-conditioned vehicle, is accompanied by a local expert guide and includes pickup and drop-off from Tunis hotels.

If you only have limited time in Tunis, the Full Day Carthage, Sidi Bou Said, Bardo Museum, and Medina Private Tour manages to whip you around all the city's major tourist attractions.

The tour includes a guided visit to the main ruin areas of Carthage, an included lunch in the city's famed blue and white seaside suburb of Sidi Bou Said, a tour of the acclaimed mosaic collection inside the Bardo Museum, and a short walking tour of Tunis' medina including a visit to the Zitouna Mosque.

You are accompanied by a professional tour guide throughout the tour, and entrance fees to Carthage and the Bardo Museum are included in the tour cost, as is pickup and drop-off at your hotel.

According to legend, Carthage was founded by the King of Tyre's daughter Elissa, after the king and his band of followers fled the Levant following a dispute over succession to the throne.

In 814 BCE, a Numidian prince granted Elissa, her father, and followers land from which the town of Qart Hadasht (known to the Romans as Carthago) sprung up.

In antiquity, the Sebkha Ariana (salt lake) was still linked with the sea, so that Carthage lay at the end of an easily defensible peninsula, linked with the mainland only at its east end.

It was enclosed by a wall more than 40 kilometers long, 10 meters thick, and up to 13 meters high, reinforced by towers, ditches, and earthworks, which protected the city and the surrounding agricultural area from enemy attack. A force of 20,000 infantry, 4,000 cavalry, and 300 elephants defended the city.

Under the Magonid (Hannibal) dynasty, Carthage became the leading commercial power in the western Mediterranean; its seamen sailed around the whole of Africa and discovered the coasts of Britain. But its success led to conflict with the other Mediterranean power, Rome.

The resulting three Punic Wars ended in the complete destruction of Carthage in 146 BCE.

The city was plundered, burned down, razed to the ground, and ploughed over, and the whole area was sprinkled with salt, so that even the soil should be made infertile.

The area was later resettled by the Romans and named Colonia Julia Carthago. Soon afterwards, it became the seat of the provincial government.

Thereafter, it grew and flourished, and by the early 2nd century CE, it was the third largest city in the Roman Empire, with a population of around 300,000.

Magnificent public buildings were erected during this period, second only to those in Rome itself. As in Punic times, the central feature of the city was the hill of Byrsa, with the Capitol and the forum, and the Romans largely preserved the general layout of the Punic town.

By the beginning of the 4th century, Carthage had become the leading city in Christian Africa and the see of a bishop.

Under Byzantine rule, it retained its predominance in North Africa until the Arabs arrived and once again utterly destroyed the city in 692 CE.

Thereafter, Carthage fell into an oblivion, which ended only under the French protectorate and when the Catholic Mission, honoring the city's early Christian tradition, established its African headquarters in Carthage.

Thought to be the place where the Phoenician princess Elissa landed in Tunisia, the Tophet is a religious sanctuary, where people worshipped the sun god Baal-Ammon.

Excavations here have revealed that during the early days of the city, it was common practice to sacrifice first-born children here to make sure the city found favor with the gods.

Although human sacrifice died out, the Tophet was used as a cult site of some sort right up to the Christian era.

At the lowest level of all, the excavators discovered a small niche, the Chapel of Cintas, which may possibly have been the burial chapel of Elissa herself.

The site is a maze of burial shafts and remains of foundations, with some of the numerous stelae bearing inscriptions and symbols.

On the offer of a small tip, the custodian will open a shed containing numerous stelae, most of them with inscriptions, and pottery urns said to contain the ashes of the unfortunate sacrifice victims.

Today, only the foundations and some scattered columns remain, sprawling across the coast, overlooking the Mediterranean.

The remnants allow you to imagine the original layout of this once grand complex and you can walk through the rooms – from caldarium (hot room) to the central frigidarium (cold room) and palaestra (gymnasium) as Roman bathers once would have.

Behind the baths is the Archaeological Park, where the rectangular grid of streets clearly shows the layout of Roman Carthage's residential quarter.

The park reflects the long history of Carthage, with Punic graves of the 6th and 5th centuries BCE, the five-aisled Basilica of Douimès dating from the 6th century CE, and an underground burial chapel (the Chapelle Sainte-Monique) of the 7th century.

All over the site are the remains of Roman cisterns, and under a tree are numbers of limestone "cannonballs", projectiles from Carthaginian arsenals.

Northeast of the Archaeological Park, on a site formerly occupied by a 19th century Bey's Palace, stands the well guarded Presidential Palace.

The Carthage Museum (Musée National de Carthage) displays a wide range of artifacts that have all been excavated from the surrounding archaeological sites.

Inside, the exhibits cover the entire history of the Carthage site, with models of its various stages of inhabitation, and explain the course of the excavation work carried out by archaeologists here.

The models of the Tophet and the Capital (built by the Romans atop the ruins of Punic Carthage) are particularly helpful for visitors attempting to get their head around the site.

Displays range from Punic jewelry and ornaments, and Roman clay masks and sarcophagi, to early Christian mosaics and funerary stelae.

After touring the rooms, head out to the museum garden, where you'll find a three-meter-high marble statue commemorating Louis IX (though in fact the statue is a likeness of the Emperor Charles V) amid the greenery.

The Quarter Magon excavation site is in a small park near the Archaeological Park and is useful to visit to feel an impression of the development of the town in Punic times.

Immediately behind the seawall (5th century BCE), which just before the Third Punic War was 13 meters high, was the craftsmen's quarter.

Beyond this were larger houses, and beyond these again, luxurious villas with richly patterned terrazzo floors.

There is a small museum, with models of the Punic town walls, houses, and streets; pavement mosaics of the Punic period; and a model of the ancient quarries at El Haouaria.

Byrsa Hill was the central feature of the Punic settlement. In the 5th century BCE, the Carthaginians built workshops here, which later gave place to houses.

After the destruction of Carthage, the hill remained unoccupied, and it was only in the reign of Roman Emperor Augustus that the summit of the hill was leveled off. It destroyed the Punic remains, which included a temple of Eshmun (Asklepios), and led to the construction of a huge forum and Capitol.

Today, a small excavated area containing the foundations of Punic houses can be seen here.

During the Roman Era, Byrsa Hill was the starting-point of the two main axes of Roman Carthage: the decumanus, running from east to west, and the cardo, from north to south.

Today, the hill is crowned by the Cathedral of Saint Louis, built in 1890 and dedicated to King Louis IX, who died here in 1270 during the siege of Tunis.

During excavations under the church, various Roman remains were found, which are now displayed in the Bardo Museum.

From the summit, tourists can enjoy fine views across the entire Carthage area.

The 2nd century Roman theater is found on Avenue Reine Didon, built into a hillside facing the sea. There is seating for 5,000 spectators.

The stage, slightly raised, is backed by a scenae frons (stage wall). Immediately adjoining the theater is the Park of the Roman Villas.

Once a Punic cemetery (in which a number of shaft graves are still to be seen), the site was later occupied by the peristyle villas of wealthy Romans.

One 3rd century house, the Villa des Volières, has been restored. From the terrace, on which there are a number of fragments of sculpture, there is a fine view over Carthage, the Presidential Palace below, the Gulf of Tunis, and Cap Bon beyond.

Just one kilometer northwest of Byrsa Hill is the 2nd century Roman amphitheater, a five-story structure with seating for some 50,000 spectators and an arena that could be flooded for mock naval battles.

Apart from its massive foundations and a few underground rooms, however, the whole structure has been destroyed.

During the persecution of Christians in CE 202, St. Perpetua, her slave-girl Felicitas, and others were martyred here by being trampled to death by a wild cow. A marble column erected by the Pères Blancs commemorates them.

St. Cyprian was beheaded here in CE 258, the first African bishop to be martyred, and St. Augustine lectured in the arena.

On the opposite side of the street from the amphitheater, a footpath leads to the La Malga cisterns, built by the Romans to store water brought from the Zaghouan hills in an aqueduct 132-kilometers long. Only 15 of the original 24 cisterns are now left.

Along Rue Hannibal lies the old Punic harbor, with two basins in which the mightiest fleet in the Mediterranean once laid at anchor.

It's a sleepy, non-descript place now, but according to the ancient sources, the commercial harbor was in the shape of a rectangle measuring 456 meters by 356 meters, linked with the sea by a channel 20 meters wide.

The naval harbor to the north, which was surrounded by a high wall, had a diameter of 325 meters. A channel giving it direct access to the sea was constructed only during the Third Punic War.

The naval harbor alone had moorings for some 220 vessels, both along the landward side and around the island. 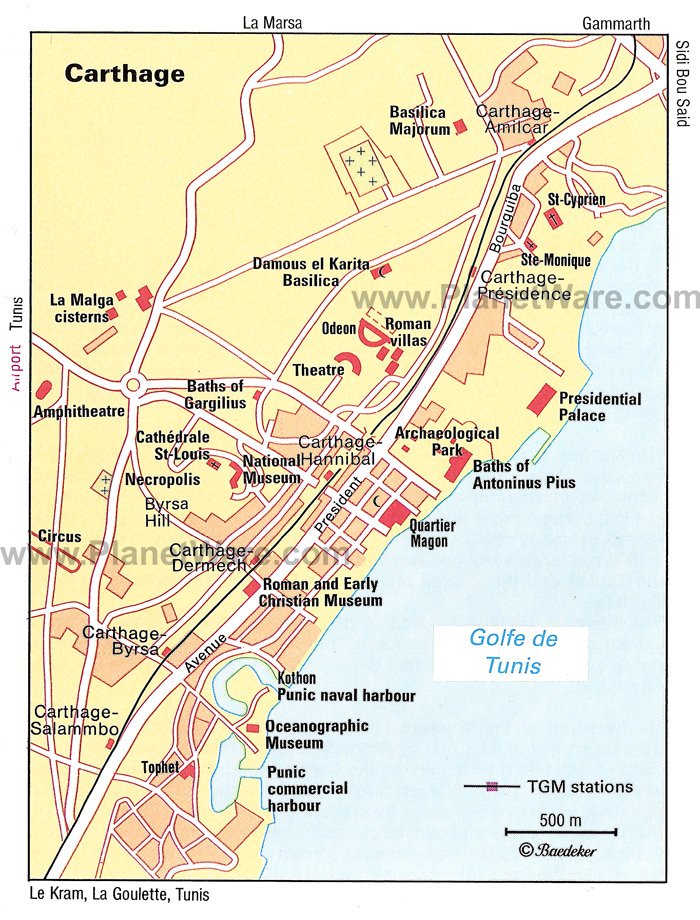