Djerba is the kind of easygoing resort that sums up island living.

Just five kilometers off Tunisia's southern coast, this island idyll's gently sloping, sandy beaches and perfect Mediterranean climate have made it a favorite stop for tourists looking for a winter beach break.

Plenty of resorts cater to this crowd, but Djerba also offers other attractions, such as timeless villages and watercolor-worthy scenery for those who care to delve deeper into the culture.

It's also a great spot to base yourself if you want to explore the other popular things to do in southern Tunisia on a series of day trips.

If you're heading to the island find out what to do beyond the beach with our list of the top tourist attractions in Djerba.

With its quaint maze of alleyways lined by picturesque whitewashed houses and shops selling colorful ceramics, the Old Town district of Houmt Souk (Djerba's main town) was made for strolling.

A number of well-preserved fondouks (caravanserais) can be seen amid Houmt Souk's alleyways.

These merchant inns combined sleeping quarters, animal stabling, and warehouse storage for the many traveling merchants who traversed North Africa, buying up salt, spices, and textiles to take back to Europe.

Their typical structure usually took the shape of a series of rooms, several stories high, built around an arcaded courtyard.

Today, many of the fondouks in Houmt Souk now function as boutique hotels or restaurants and have been painstakingly restored.

For many visitors, this is one of the best places to visit for shopping on the island. The displays of traditional handicrafts in the souk streets here include Berber jewelry, textiles, traditional shoes, brass and silverware, leather goods, and piles upon piles of hand-painted pottery. It's a shopaholic's dream that few resist.

When haggling is done for the day, head to the tiny harbor, complete with pastel-colored boats bobbing on the Mediterranean, to capture a sense of Houmt Souk's fishing village past.

Accommodation: Where to Stay in Djerba

This interesting little museum is where to come if you want to dig a little deeper under Djerba's resort skin.

Although small, the galleries here display an impressive number of exhibits, all focused on Djerba's local heritage and exploring and preserving the island's cultural traditions.

As well as displays focused on the history of the island, there are well-curated exhibits devoted to Djerba's Jewish heritage, and fascinating displays of vibrant, traditional costumes, beautiful old jewelry, antique ceramics, and extravagantly carved wedding chests.

The museum is housed next door to the beautiful 18th-century Zaouia of Sidi Zitouni. Visitors can also enter this mausoleum to view its impressive stalactite-designed ceilings.

A fort has looked out over Houmt Souk's harbor since the 13th century. The original building was strengthened in the 15th century, but later replaced in the 16th century, when the notorious corsair Dragut built the massive Bordj el Kebir fortress here to look out over the bay.

Extensive restoration work has been carried out on the building since the 1960s to preserve it.

If you walk up here, there are fine views across Houmt Souk's harbor.

Between the fort and the harbor, you can see a small obelisk commemorating the pyramid of skulls, which Dragut erected here.

The purpose-built and contemporary Lalla Hadria Museum is devoted to Islamic cultural heritage and art. It contains an impressive collection of over 1,000 pieces displayed across 15 galleries.

Exhibits of traditional clothing and costumes from the 18th and 19th centuries, Tunisian ceramics, religious artifacts, and antique textiles all display the diversity of Islamic artistry that North African and Middle Eastern nations have produced.

Neighboring the museum is the Djerba Explore Crocodile Farm, a small nature park where you can view over 100 crocodiles lounging in and around a purpose-built, landscaped lagoon area.

La Ghriba is Djerba's most prominent reminder of the island's vibrant Jewish community, which has now disappeared.

Although not particularly impressive from the outside and not that old either (the synagogue was built in the 1920s), this site has a history that goes back much further.

One local story says that a holy stone (perhaps a meteorite) fell to earth here denoting the site's religious importance.

The interior of the synagogue has fine paneling and contains important and valuable old Torah scrolls.

Every year, 33 days after Easter, La Ghriba is the scene of the Maghreb's (North Africa's) most important Jewish pilgrimage.

After viewing the synagogue, head into central Er Riadh itself where the narrow streets of the Djerbahood area are home to colorful, contemporary street art murals first painted as part of a street-art project in 2014.

The village of Guellala is Djerba's main pottery center, and the main street is lined with ceramic workshops displaying their wares to visitors.

It's said there are approximately 450 local potters living here, making it well worth visiting at least one workshop to get a feel for this ancient craft.

The traditional Guellala ceramic products are unglazed storage jars, modeled on ancient amphora, but these days there is also a predominance of brightly painted pottery.

The clay used by the potters is excavated from shafts up to 80 meters deep, dried out for two or three days, and then broken up and mixed with water (freshwater for red pottery, saltwater for white).

The pottery is left to dry for 60 days before being fired for four days in semi-underground kilns, in which it remains for another ten days to cool gradually.

If you're in the mood for some shopping while on Djerba this is the place to go.

Djerba's most popular beach is Plage Sidi Maharès — the perfect place to relax and catch some sun after all that souk strolling and ceramic shopping.

It's the oldest resort beach on the island and hence the most developed, with restaurants and cafés running along its length and plenty of deck chairs, sun loungers, and umbrella shades for rent.

The sandy shore extends for approximately 13 kilometers up to the headland of Ras Tourgueness, where there is an old-fashioned lighthouse.

All visitors should try and catch the buzzing Friday market.

The old medina area is full of gorgeous buildings, skinny alleyways, and high walls with crumbling whitewash detail. The population of the village includes many descendants of slaves, who were originally brought here from Sudan.

If you're here during the summer months there is a weekly cultural show complete with folk dancing and camel parades.

It's a lovely place to spend the day, with a less developed shoreline than Plage Sidi Maharès but still with all the services you'd need.

Umbrellas, deckchairs, and sun loungers can all be hired along the shore, and there are plenty of restaurants and cafés for when you're feeling peckish.

This is a good choice for tourists looking for a less crowded beach scene, although during summer weekends expect plenty of other people to be on the beach with you.

One of the most surreal sightseeing attractions in Tunisia, the Chott el Djerid is a long day trip from Djerba (290 kilometers) but worth it for anyone who wants to visit this bizarre natural formation.

This mammoth salt-pan stretches for kilometers, its surface an unearthly shimmering bluish-white crust of salt. In some places, the salt has crystallized into bizarrely shaped pinnacles or into clusters of multi-colored deposits.

Springtime visitors are particularly in luck and should be able to spot the flamingos that breed here, building their nests and raising their young before flying off again by July.

Sitting on the Akkara Peninsula, with a shoreline of pretty white beaches, Zarzis is southern Tunisia's second major tourist center (after Djerba).

About 20 kilometers southeast of Djerba, the coastal oasis town is surrounded by olive and date palm groves as well as lush market gardens. If you don't have time to visit the gorgeous and tranquil oasis of Tozeur, then Zarzis is a good compromise.

Many people come here simply for the beaches, but the town itself has an old-fashioned air despite the many tourist resorts. It is a wonderful place to lap up some Tunisian provincial culture.

For many people, a trip to Tunisia wouldn't be complete without at least a quick jaunt to the sands of the mighty Sahara.

If you're staying on Djerba, the easiest place to go for your desert experience is Nefta.

This oasis town is a major center for date growing and has a wonderfully preserved old medina, where a warren of lanes reveals houses decorated with brick facades, the domes and minarets of mosques in between.

Outside town is where most tourists are heading, though. About 15 kilometers west of Nefta is a large dune area (an offshoot of the Sahara's famed Grand Erg Oriental dune region), where you can get a taste of desert life. The stunning canyon scenery of the Selja Gorge is also easily accessed from here.

Star Wars geeks: pinch yourself now. Medenine's Ksour (adobe fortified storehouses) are straight out of the movies (Star Wars Episode One: The Phantom Menace, to be precise).

Originally Medenine was an important staging point on the caravan routes into the interior of Africa, and these organic looking granaries were used as vital warehouses for semi-nomadic families to store their possessions while they were away.

Barrel-vaulted cells were built side-by-side, one over the other, in honeycomb-like blocks up to six stories high.

Most were pulled down in the 1960s to make way for the expansion of the modern town, but one particularly picturesque example — Ksar Medenine — has survived. Its movie-star status brings flocks of visitors here just to see it.

This Roman town, 27 kilometers north of Medenine, was originally founded during the 6th century BC by the Phoenicians but flourished fully under Roman rule after AD 48.

The remains that survive today date mainly from the 2nd century AD and include a Roman bath complex; the forum; the temple of Apollo, Concord, and Hercules; and the temple of Dionysus.

Although it isn't a particularly impressive site — having been fully destroyed by the Vandals — the town will interest anyone with an eye for Tunisia's classical history.

On a day trip from Djerba to Medenine, it makes a good stop to break up the journey.

Finds unearthed here can be seen at the Bardo Museum in Tunis. 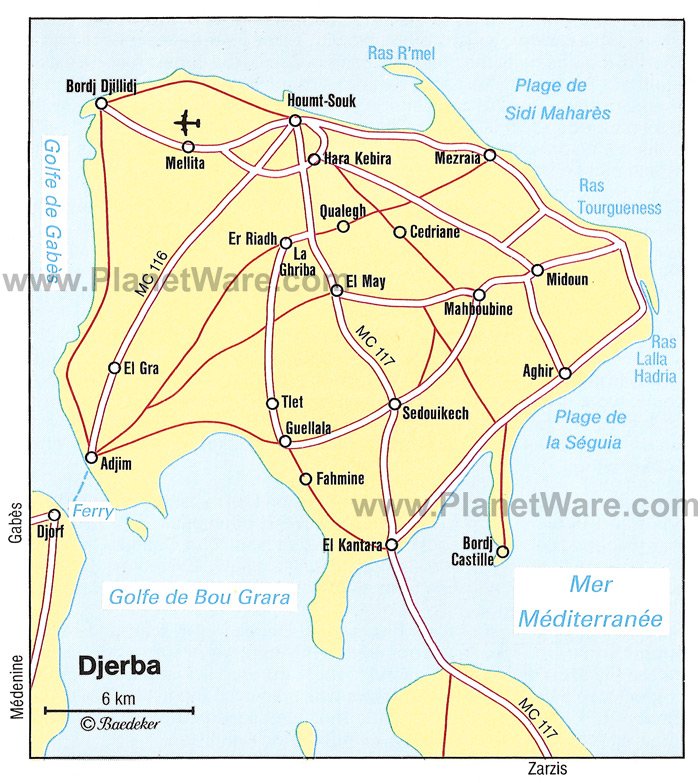 15 Best Places to Visit in Africa
BE INSPIRED