Laid-back little Mahdia is an old-fashioned and charming town with an unhurried air.

With its lanes full of whitewashed houses and cafés teetering along the rocky cliff edge, this is a place to relax and kick back for a few days, enjoy the fresh sea air on the beach, and wind down while watching local life unfold, rather than do any actual sightseeing.

For those who are itching for things to do, Mahdia is Tunisia's top diving site, with a host of opportunities for underwater aficionados.

The town is also within easy day-tripping distance of two of Tunisia's premier tourist attractions: the mighty amphitheater of El Jem and colorful medina (old town) of Sousse.

Most, though, will be happy to spend much of their time here just wandering Mahdia's medina (old town), taking in the views from the top of the battlements of the Bordj el Kebir, and simply enjoying a few days of tranquil Tunisian seaside life.

Learn about the best places to visit with our list of the top attractions in Mahdia.

The gatehouse, with its 44-meter-long entrance passage, was formerly incorporated in the 175-meter-long town walls that crossed the peninsula and is one of Mahdia's most impressive architectural attractions.

The present gate is not the original Fatimid structure, having been rebuilt in 1554 using stone from the Fatimid fortress after the Spanish destroyed Mahdia.

Of the original round towers on polygonal bases, which stood at the north and south ends of the wall, only stumps at the north end remain.

From the roof of the gatehouse, tourists can enjoy fine views of the medina, extending to the tip of the peninsula. The steps leading up to the roof are on the inner side of the gate.

The gate leads into Rue Obeid Allah al-Mahdi where there is a small covered souk. On the opposite side of the street is the entrance to Dar el Himma, a former mosque that houses a small silk museum.

Accommodation: Where to Stay in Mahdia

Many travelers are simply here for the beach, which trails north along the coast from the center of town.

Those in the know rate this narrow but long strip of soft white sand fronting the turquoise waters of the Mediterranean as one of the best in Tunisia.

The water is shallow at the shore, making this a good beach choice for families with little ones in tow.

Most of the big resorts backing the beach have claimed their own private patch of sand. These are the best groomed sections, but the entire beach is noted for its cleanliness.

Sun loungers and shades can be rented by beachgoers, and there are plentiful cafés and restaurants along the beach road for lunch stops and refreshments.

The mammoth square hulk of the Bordj el Kebir sits just a short distance along the seafront from the Great Mosque.

Built in 1595, this grand fortress is commandingly situated on the peninsula's highest point and is the town's most recognizable attraction.

This was also the site of an earlier 10th century palace built by Obeid Allah al-Mahdi when he founded the town, though nothing is left of this building except a few fragments of masonry from the original entrance way.

The courtyard of the fortress holds a small mosque. The tower in the fort's southwest corner has two reliefs built into the masonry, which are believed to have come from an earlier building.

The main attraction of a visit to the fort is the magnificent view you have from the battlements. From the top, you have uninterrupted panoramas over Mahdia, the old harbor area, and Cap Afrique.

Built in CE 921 by the founder of Mahdia, Obeid Allah al-Mahdi, this was the first Fatimid mosque modeled on Kairouan's Sidi Oqba Mosque.

Originally the Great Mosque was connected on two sides with the town walls, but when the Spaniards destroyed the fortifications, the mosque suffered severe damage as well. Only its north front face survived the attack.

The building that replaced the original mosque was found to be near collapse during the early 20th century and was pulled down in the 1960s.

A careful rebuilding plan was carried out afterwards, raising the Great Mosque again on its old site in accordance with the original architectural plans.

The mosque is entered through a monumental doorway, which was originally used only by the Caliph. Over the doorway is a large horseshoe arch, and on either side are tall niches, shallow at ground level and deeper on the upper level.

The 42-meter inner courtyard is surrounded on three sides by a colonnade with horseshoe arches, and leads onto a nine-aisled prayer hall with the same ground plan as its prototype in Kairouan.

Mahdia is only 43 kilometers northeast from El Jem so it's the nearest coastal resort town to visit El Jem's mammoth amphitheater, which is Tunisia's most famous Roman ruin.

This huge monument, built in the 2nd century when the surrounding area prospered due to its olive production, is the 4th largest amphitheater in the world and spans 149 meters long and 122 meters wide.

You can easily hire a private driver/taxi to take you on a half-day return trip to El Jem or, if you want to travel to El Jem by public transport, there is a regular share-taxi service between the two towns.

Wandering between the Bordj el Kebir and the lighthouse (Phare) at the tip of the peninsula brings you to the old harbor area, with the gorgeously situated cemetery and some interesting scattered ruins.

Near the lighthouse are a number of 10th century Shiite tombs, as well as the remains of some cisterns.

The peninsula's south side was the site of the old harbor (Port Fatimide), which was probably used as far back as the Punic era and has a kothon (inner harbor) very similar to that of Carthage.

During Mahdia's heyday in the Fatimid period, two watchtowers (incorporated into the town walls and later linked by an arch) protected the narrow entrance channel.

Mahdia is Tunisia's best spot for underwater exploration, and fans of wreck diving won't be disappointed.

In 1907, sponge divers off Cap Afrique discovered the wreck of a Roman sailing ship sunk in 86 BCE – thereby proving the harbor had been used from the classical age. Its cargo, which included dedicatory reliefs from Piraeus and large numbers of marble columns, showed that the ship came from Piraeus (now part of modern Athens in Greece).

The items recovered from the underwater excavations are now at the Bardo Museum in Tunis.

Although this wreck itself can't be dived, there are several other more modern (mostly from WWII) wreck dives that can be explored with diving companies in Mahdia.

Sousse, Tunisia's premier tourist resort and a major historical destination, is 59 kilometers northwest from Mahdia, and it makes an excellent day trip from town.

Home to one of Tunisia's most thoroughly photogenic medina (old town) districts that brims with shopping opportunities for local craftwork within its souks, and with the sturdy, well preserved fortifications of both Sousse's Ribat and Kasbah able to be explored, there is plenty to keep day trippers occupied for a full day.

The quickest way to jaunt between Mahdia and Sousse is by car (or share-taxi if you're taking public transport) but for train travel fans, there is a very slow local train connecting the two centers.

A wander here is the perfect way to soak up the seaside character of this quaint town.

The medina hasn't been trussed up for tourists, so you won't find a plethora of souvenir stores here as in Djerba and Hammamet, but its backwater atmosphere is part of Mahdia medina's charm. Instead, this is a traditional district, the heart and soul of a town where locals still live.

The promontory of Ras Bou Tria, 52 kilometers south of Mahdia, is reached using a side road eight kilometers past the town of Melloulèche.

This rather windswept and atmospheric coastal strip is home to the remains of ancient Acholla, and excavations here have uncovered the foundations of Roman houses and the remnants of an amphitheater and bathhouse.

Nearer to Mahdia, only 14 kilometers away and just beyond Ksour Essaf, is the small town of Salakta with the ruins of Ancient Sullectum.

This was probably the port where lions destined to fight in the grand and brutal gladiatorial contests of El Djem were shipped.

The remaining ruins are extremely sparse and probably only of interest to the most enthusiastic of history lovers, but the Salakta Museum inside the site is worth a visit if you're heading on a day trip ramble south of Mahdia.

The museum's most famous exhibits are two Roman-era mosaics, one of which illustrates a three-meter-high lion. Other artifacts on display, such as a collection of burial pottery, were all unearthed from the surrounding site. 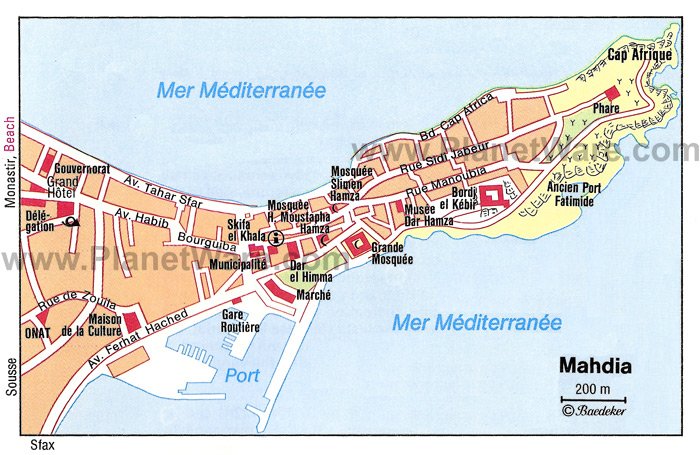 Where to Stay in Malta: Best Areas & Hotels
Recent Articles