One of Tunisia's most popular holiday resorts, Sousse effortlessly blends resort comforts with historic and cultural things to do — combining the best of both worlds.

While the luxury hotels lining the beachside suburb of Port el Kantaoui provide all the sun-and-sand bliss, the medina district in Sousse's center has more than enough tourist attractions to keep culture vultures happy.

It's no wonder this ancient seaside town continues to charm all those who visit. Discover the best places to visit for sightseeing with our list of the top tourist attractions in Sousse.

Off the beach, Sousse's main tourist attraction is its medina (old town) district.

Its traditional character has been painstakingly preserved and it was rewarded with UNESCO World Heritage Site status for being one of the finest surviving examples of medina architecture in Tunisia.

The warren of alleyways is surrounded by a two-kilometer circuit of walls, built in AD 859, following the same line of the original Byzantine-era walls, and using mammoth stone blocks recycled from ancient Roman sites.

There were originally six gates, of which two survive: Bab el Khabli on the south side and Bab el Ghabi on the west.

Wandering around here is like slipping back a few centuries in history. Narrow lanes are lined with closely packed houses, rising up and leaving just a sliver in between.

Although there are monuments aplenty, and the souk section is full of shopping opportunities, it's just as much fun to spend an afternoon strolling aimlessly and soaking up the old-world atmosphere.

While here, definitely don't miss the La Sofra Cisterns. Entered through an iron gate, these huge underground cisterns probably date from the Roman period. They once had a capacity to store 3,000 cubic meters of water.

Accommodation: Where to Stay in Sousse

Northwest of Sousse's Great Mosque, the tower of the Ribat is the city's major landmark.

This was one of a chain of around 800 fortifications built by the Aghlabid dynasty along the Tunisian coast. Today, only a few of these buildings survive.

The Ribat, with its bulky, solid walls, was the town's first line of defense against enemy attack during the Aghlabid era.

The Aghlabid soldiers here were religious warriors who in peacetime devoted themselves to religious duties. Several scholars have since suggested that these warrior holy men may have provided a model for the later Christian knightly orders.

While visiting the complex, make sure to climb up to the top of the watchtower for great views across Sousse medina below.

Sousse Ribat now ranks with the Ribat of Monastir as one of the best preserved in Tunisia.

The Kasbah's 30-meter-high Khalaf al Fata watchtower (named after its builder), built in AD 859, is recognized as one of the oldest and best preserved examples of its type still standing in North Africa.

The Kasbah fortifications were built and extended around the tower in the 11th century and took over the military role of Sousse's Ribat.

The building today contains Sousse Archaeological Museum, so you can admire its architecture while touring the exhibits.

The Kasbah's topmost platform is 50 meters above that of the Ribat, making it one of the best places to visit to get medina views.

This excellent museum, inside the Kasbah, contains the largest collection of antiquities in the country after Tunis' Bardo Museum.

Its main exhibits herald from the Punic, Roman, and early Christian periods.

Give yourself a good couple of hours for a visit, as there are some exceptional pieces here.

Room 3, with its sublime mosaics including the Triumph of Bacchus and Apollo and the Muses, is an obvious highlight, but also don't miss Room 2's Medusa mosaic (regarded as one of the collection's finest pieces) and the Seasons and Months mosaic in Room 9 that was unearthed in El Djem.

Sousse's fortress-like Great Mosque was built in AD 851, a few years after the re-foundation of the town by the Aghlabids.

Its construction design was based on the model of the Sidi Oqba Mosque in Kairouan.

The mosque originally had two defensive towers, which guarded the harbor in earlier centuries. The domes of the minarets were later additions.

An unusual feature is the external staircase leading up from the courtyard to the minaret.

The battlement walls of the courtyard, which is surrounded on three sides by a colonnade of tall horseshoe arches borne on massive piers, are decorated with an elaborate Kufic frieze.

The arcade in front of the 13-aisled prayer hall was added in 1675. The prayer hall originally consisted only of three barrel-vaulted bays, but by the 10th century, it was found to be too small and was extended by the addition of three higher groin-vaulted bays on the side with the qibla wall.

The beautifully decorated Aghlabid dome, now over the fourth bay, was originally over the bay in front of the mihrab.

Non-Muslims can enter the courtyard but not the prayer hall. The prayer hall doors, though, are usually open, so you can peek inside.

If you're in the mood for a spot of shopping and don't mind some fun-filled haggling, the medina's souk district is the place to go.

Cute and colorful Rue el Aghalba runs past the Great Mosque to the medina's west side. Off this street, on the left, is Rue d'Angleterre leading south to the beginning of the souk quarter.

The full gamut of Tunisian craftwork is on offer in the main souk streets, from colorful pottery to silver jewelry. As Sousse is Tunisia's major tourism center, there's also plenty of cheap and cheerful souvenirs for sale.

Seek out the skinny side alleyways off the main thoroughfares to find the artisan workshops of metalworkers and woodworkers away from the stalls.

This area is great for a stroll and poke around after a day on the beach while searching for your souvenirs to take back home.

The complex includes a mosque, madrassa (Islamic school of learning), and a mausoleum, and is regarded as the city's finest surviving example of Ottoman-era architecture.

As well as the complex's beautiful minaret, with its tile detailing, another notable feature is the arcading of the inner courtyard, with the antique columns within the arcades recycled from older sites.

Non-Muslims cannot enter the interior but can admire the minaret from outside.

Discovered in 1888, this large complex of Early Christian catacombs is a maze of underground passages and chambers hewed from soft local rock between the 2nd and 4th centuries.

It probably sits on the site of an earlier pagan necropolis. A total of some 15,000 people were wrapped in shrouds and buried here in wall niches of the catacombs, often placed in tiers one above the other and closed by tiles or marble plaques.

Of the four main shafts, three have been excavated. Finds from the site are in Sousse Archaeological Museum.

Unfortunately, the catacombs have been closed for the past couple of years, so check for the latest information with your hotel before making the journey out here.

If you're here for the beach, this will be your first call. This purpose-built resort complex, about six kilometers north of Sousse, is where many visitors stay on sun-and-sea holidays.

Opened in 1979, the Moorish-style development was modeled on the cute blue-and-white village of Sidi Bou Said near Tunis.

The resort is centered round a large marina with more than 300 moorings. It contains several luxury hotels and blocks of holiday apartments along the beachfront, as well as restaurants, cafés, a shopping center, and a wide range of sports facilities.

For those who want to shop with the locals rather than in the tourist stores of the medina's souk, head to the Sunday Market, which is held near the entrance to the Catacombs of the Good Shepherd.

Stalls here sell everything from livestock to traditional handicrafts in a jumble of organized chaos, so whether you're looking for a chicken or a nice set of ceramic tiles, you're in luck.

Be aware, this is a proper local market, so the more squeamish may struggle with a visit here, particularly around the livestock stalls.

With its rather dramatic setting atop a fossilized rock hill and completely surrounded by flat countryside, the old Berber village of Takrouna (six kilometers west of Enfidha) holds on to a disappearing way of life.

Only six Berber families still occupy the village, and visitors can enter some of the dwellings here to get a close-up look at traditional Berber architecture and interiors.

In the center of the village is a small mosque and the tomb of local holy man Sidi Abd el Kader.

Enfidha itself is a market center and has an excellent local Sunday Market that is worthwhile seeing if you're in the area.

The little town of Hergla, 35 kilometers north of Sousse, lies on a rocky stretch of coast speckled by sandy coves. It occupies the site of ancient Roman Horraca Caelia, which during the 2nd century AD lay directly on the boundary between the provinces of Byzacena and Zeugitana.

Since this original settlement was completely destroyed during Arab invasions, there is nothing of interest from this period left to see.

Hergla has a fine 18th-century mosque, with a dome constructed in the tube-vaulting technique found at Bulla Regia, and if you have your own transport, you'll find the surrounding beaches wonderfully unspoilt.

Sousse has been settled since at least the 9th century BC, when it was the site of an important Phoenician trading post.

It came under the influence of Carthage during the 6th century BC, and during the Second Punic War, this was Hannibal's base in his campaign against Scipio's Roman forces.

In the Third Punic War, the town, now known as Hadrumetum, went over to the Roman side and was rewarded with the grant of important privileges. These were lost, however, when Hadrumetum took Pompey's side in his conflict with Caesar.

Thanks to its strategic situation and its extensive olive groves, it soon recovered but it suffered a further setback after taking part in the Gordian rising in AD 238.

In the reign of Diocletian (AD 284-305), the town rose to some importance, and in Byzantine times became capital of the province of Byzacena.

Later, it was taken by the Vandals and renamed Hunericopolis, then recovered by the Byzantines and given the new name of Justinianopolis.

Uqba ibn Nafi's Arab forces conquered the town towards the end of the 7th century, but the settlement had put up a fierce resistance and was totally destroyed. As a result, Sousse has few remains of Roman buildings apart from the catacombs.

Two hundred years later, under the Aghlabids, a new town was founded with the name of Susa to serve as the port for their inland capital of Kairouan. This was the period when the Ribat, the Great Mosque, the Kasbah and the town walls were built. 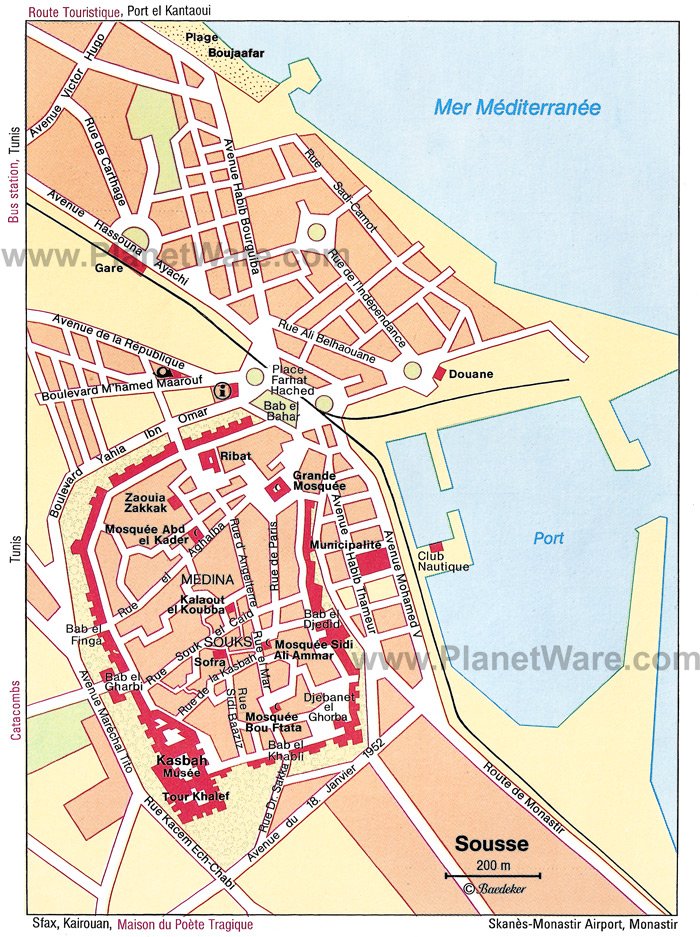 12 Top-Rated Attractions & Things to Do in Trapani
Recent Articles