Written by Jess Lee
Updated Jul 26, 2022
We may earn a commission from affiliate links ()

Even for travelers in Tunisia who are mainly here for a sun-and-sea holiday, this UNESCO World Heritage Site, halfway between Sousse and Sfax, is a must-do.

The amphitheater's location, looming over the flat, arid countryside, adds to its dramatic appeal.

Wandering through its arcades and then venturing down into the underground passageways and cells below the arena allows visitors a remarkable sense of not only this structure's use, but also of the power the Roman Empire once held across this land.

El Jem has been settled since the 3rd century BCE, when there was a Punic settlement here, but it only began to gain prominence after Caesar founded the town of Thysdrus on this site in 46 BCE.

Thysdrus lay amid a large olive-growing region, and since olive oil was in great demand in Rome during that period, the town prospered rapidly to become the leading olive-growing center of North Africa.

With a population of between 20,000 and 30,000, the town accumulated enormous wealth, much of which - as in other Roman towns - was spent on the erection of both public buildings and private houses.

The amphitheater, begun at the end of the 2nd century CE, was designed to be a symbol of this prosperity. But while it was still under construction, the decline of Thysdrus set in with a reintroduction of a tax on olive oil in 238 CE.

The tax sparked a rebellion, which spread through Tunisia. A large group of landowners, with the help of the juvenes (a kind of officers' training corps or militia), murdered the imperial procurator, the chief financial official in the province, and proclaimed an 80-year-old proconsul, Gordian, as emperor.

The rising was repressed, and the town sacked, with Thysdrus never recovering from this blow.

Later, the amphitheater was converted into a fortress, and in 699 CE, it served as a refuge for Berber leader El Kahina during her fight against the Arab invaders. After their victory, the town was abandoned, and the site was reoccupied only during the French colonial period.

El Jem's mighty amphitheater is the fourth largest in the Roman world, only coming after Rome's Colosseum; the Pozzuoli amphitheater near Naples; and the one at Carthage, of which little survives.

Its colossal size and excellent preservation has given it the nickname the African Coliseum.

Oval in form, the amphitheater is 149 meters long by 122 meters across (compared with Rome's Colosseum, which measures 188 meters by 156 meters).

It is also of impressive height (40 meters), which would have been still further increased by the canvas sails (vela) that protected the audience from the sun.

It provided seating for more than 30,000 spectators (according to some estimates 60,000), who witnessed the sporting events, bloody gladiatorial contests, and slaughters of criminals by wild animals staged in the arena.

It was thus too big for a town the size of Thysdrus, and was evidently intended as a demonstration of the city's power and prosperity.

Although the amphitheater was used for centuries as a quarry of building stone, it has managed to survive the centuries better preserved than Rome's Colosseum.

Only two-thirds of the circuit of walls with their three stories of arcades have survived. The northwest side was blown up in 1695 on the orders of the Ottoman Bey to prevent it from being used as a stronghold by Berber rebels, who had frequently entrenched themselves within its walls.

Each of the three stories originally had 30 arches, of which there remain a total of 68.

From the entrance, you climb a flight of steps that leads up to the upper tiers of arcades. Although little is left of the seating, from here there are great views over the amphitheater and the plains beyond.

Back on the ground, you can explore the area underneath the arena (which measures 65 meters by 37 meters).

Here, visitors can see two intersecting underground passages (excavated in 1908) through which the wild animals and gladiators entered the arena area. The passages are lined with cages and cells where the animals and people were held before the Roman entertainments commenced.

El Jem's amphitheater may be the major tourist attraction, but El Jem Archaeological Museum, a one-kilometer walk south from the amphitheater, is well worth adding to your things to do list while in town.

The museum holds an excellent collection of well-preserved Roman-era mosaics, as well as other Roman artifacts (including terra-cotta pots, coins, and oil lamps), all unearthed from the archaeological site that sprawls behind the museum.

The mosaics, portraying scenes of flora and fauna, as well as geometric patterns, display a high level of artistry and originally decorated the villas of El Jem's wealthy Roman landowners.

Although many of the mosaics excavated from the Roman-era villas of ancient Thysdrus here are now displayed in the museum, some have been left in situ.

The best villa ruins in the site are the House of Sollertiana and the House of the Peacock (also called Maison du Paon), which both display large floor mosaics left in place.

As well as the remnants of grand villas, the site also contains the ruins of a Roman baths complex.

Those with a particular interest in history will also want to cross to the opposite side of the road (and over the railway line) from the museum and main site area, to visit a small amphitheater dating from the 1st century CE.

How to Get to El Jem

If you want to visit independently, El Jem is on the main rail line between Tunis and Sfax. Tunisian National Railways runs four trains to El Jem daily. From Sousse, the train journey to El Jem takes 90 minutes. From Tunis to El Jem, the train takes just under four hours.

The town of Mahdia is closer to El Jem than Sousse or Monastir, only 43 kilometers northeast from El Jem. There is regular shared-taxi transport between the two towns.

With your own wheels, or by hiring a private driver, it's also possible to visit from Kairouan, 72 kilometers northwest.

Where to Stay in El Jem

El Jem only has a couple of accommodation choices, but if you do want to beat the tour bus crowds, staying overnight in town is a great option as long as you're not looking for five-star facilities.

The best option in El Jem town is the Hotel Julius, which has well-kept rooms, a restaurant serving typical Tunisian dishes, a small swimming pool, and great views of the amphitheater from many of the rooms. The amphitheater is only a short 600-meter stroll from the hotel. 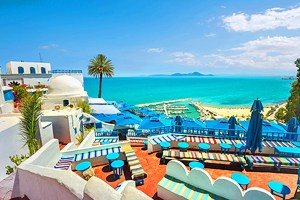 22 Most Beautiful Islands in the World
BE INSPIRED!
More Pictures of Tunisia
Destinations popular right now
17 Top-Rated Attractions & Places to Visit in Tunisia