Bustling Sfax is one of Tunisia's major commercial centers and the country's second largest city.

Although it doesn't have the sandy attractions and multitude of things to do offered by other Tunisian towns, Sfax is ripe for sightseeing and is a great place to take in local Tunisian culture, with a beautiful walled medina area to explore.

It's also a good base for day trips and excursions. Both the famous underground architecture of Matmata and the amphitheater of El Jem can be visited on day trips, while Sfax is also the hopping-off point for longer excursions to the Kerkennah Islands – one of the best places to visit in Tunisia for both scuba diving and to experience tranquil island life.

Check out what to do and where to go with our list of the top attractions in Sfax.

First built in 1306, the mammoth main gateway (known as Bab Diwan) into the medina is one of Sfax's most prominent points of interest. It has been much altered during its long history, was nearly completely destroyed by bombing in 1943, and subsequently rebuilt in its original form.

Sfax's medina is relatively small, measuring only 400 meters by 500 meters and is enclosed by a well-preserved circuit of walls. The original mud brick walls were made by the Aghlabids in the 9th century and were strongly fortified in the 12th century. The kasbah at the southwest corner of the walls was added in the 17th century.

Unusually, compared to the medinas in Tunis and Sousse, the streets here are laid out in a grid plan, presumably inherited from the Roman town.

Sfax's medina remains a very local scene and is one of the best places to visit to see the contrast with more tourist-oriented medinas, such as in Sousse. Here, you'll find alleys of traditional artisan workshops and busy souk streets catering for local grocery needs with butchers, bakers, and fresh produce.

The Great Mosque sits basically right in the center of the medina, making it easy to get your bearings while exploring the lanes. From here, Souk El Rbaa, crammed with handicrafts and traditional clothing stalls, runs north up to the main souk (market) area.

Accommodation: Where to Stay in Sfax

Dar Jellouli is the highlight of a stroll inside Sfax's medina. This two-story mansion, dating from the 18th century has been immaculately restored and is a wonderful example of traditional medina architecture.

Once home to a wealthy Andalusian merchant family, Dar Jellouli's rooms are built around an internal courtyard, intricately decorated with tile work and carved door and window frames made from Gabès stone, and surrounded by horseshoe arches.

The ground floor of Sfax's Municipalité (Town Hall) building is home to the city's small but very interesting Archaeological Museum, which holds exhibits of Punic, Roman, and Byzantine antiquities.

The museum's most famous piece is the Daniel in the Lion's Den mosaic, dated from the 5th or 6th century and noted for its fine artistry. Also make sure to see the 3rd century Ennius Surrounded by the Muses mosaic.

In the center of the Sfax medina stands the Great Mosque, founded in 849 CE and rebuilt during the 10th and 11th centuries. It was finally finished in 1759 under Ottoman rule.

Non-Muslims may enter the inner courtyard as long as they are modestly dressed.

At the end of the courtyard is the nine-aisled prayer hall with its vaulting borne on antique columns. The graceful minaret is made up of three successively smaller sections and richly decorated with Kufic inscriptions and ornamental bands.

Sfax's new town district (ville nouvelle in French) lies between the harbor and the medina.

It was constructed during the French protectorate, though only a few buildings from the colonial period now survive. One of the most distinctive of these is the Town Hall (Place de la République), built in neo-Moorish style with a tall minaret-like tower.

Sfax's new town neighborhood is a great place to come to sample the city's café culture, particularly in the early evening when it sometimes seems like everyone in town is here promenading along the main street.

El Jem is only 75 kilometers north of Sfax so is easily visited as a day trip from the city.

The amphitheater of El Jem is probably Tunisia's most famous and most photographed tourist attraction, as well as the country's grandest remnant of the Roman era.

Built in the 2nd century, during the heyday of ancient Thysdrus (modern-day El Jem), the amphitheater is a massive monument to the prosperity of this town thanks to its prominent olive growing industry during the Roman era.

The best way to visit El Jem from Sfax on a day trip is by private driver, shared taxi, or your own hire car as although there are five trains daily between the towns, the departure times don't work very well for day trips.

This beautiful strip of sand, about 25 kilometers southwest of Sfax, is much frequented by the population of Sfax, and on the weekends becomes a vibrant and buzzing hub of family fun.

If you're looking for a quiet beach scene, this probably isn't the patch of sand for you, but if you want to check out how the locals have a day at the beach – complete with soccer games and picnics – you've come to the right place.

The most-visited troglodytic village in Tunisia, Matmata came to fame after scenes from Star Wars: Episode IV A New Hope were filmed in the village's unique underground homes and around the cratered landscape here.

The inhabitants first went underground to seek shelter from the sun, excavating circular pits in the land some 12 meters in diameter and between six and 12 meters deep, and digging out living quarters hewed from the surrounding rock.

Many of these old homes are now uninhabited, and most villagers live in the new town of Matmata Nouvelle, 15 kilometers away.

Some of the traditional houses now function as very simple hotels and museums and can be visited by tourists and sightseeing day-trippers.

Matmata lies about 200 kilometers south from Sfax, so if you're on a day trip, start early.

The Kerkennah Islands lie off the Tunisian coast, between 20 kilometers and 40 kilometers east of Sfax. Plan to spend a couple of nights here if you want to explore.

The archipelago consists of seven islands with only the principal two (Gharbi and Chergui) inhabited. The island inhabitants make a living mainly by fishing, sponge diving, and selling their craft products.

The sandy beaches, most of them still mainly unfrequented, offer excellent conditions for diving.

From Sfax there are, depending on the season, between two and five daily car ferries to the islands.

The site of ancient Thaenae (Thyna), 11 kilometers southwest of Sfax, was the most southeasterly outpost of Carthaginian territory.

The Fossa Regia, constructed by the Romans in 146 BCE to mark the frontier between the Roman province and the kingdom of Numidia, began just south of the town.

Excavations here have revealed the remains of various buildings from the 4th and 5th centuries, including baths, dwelling houses, and a Christian church.

To the east of the site is a necropolis centered around an octagonal mausoleum.

Shoppers will enjoy poking about in Sfax's colorful market districts.

In the medina, between the Great Mosque and the northern gate (known as Bab el Djebli) is the old town's souk (market) quarter.

Outside the medina walls is the new market area, where locals come to do their shopping. There's everything here from fresh produce to plastic trinkets, and it is great fun for people watching, as well as for picking up a bargain or two. 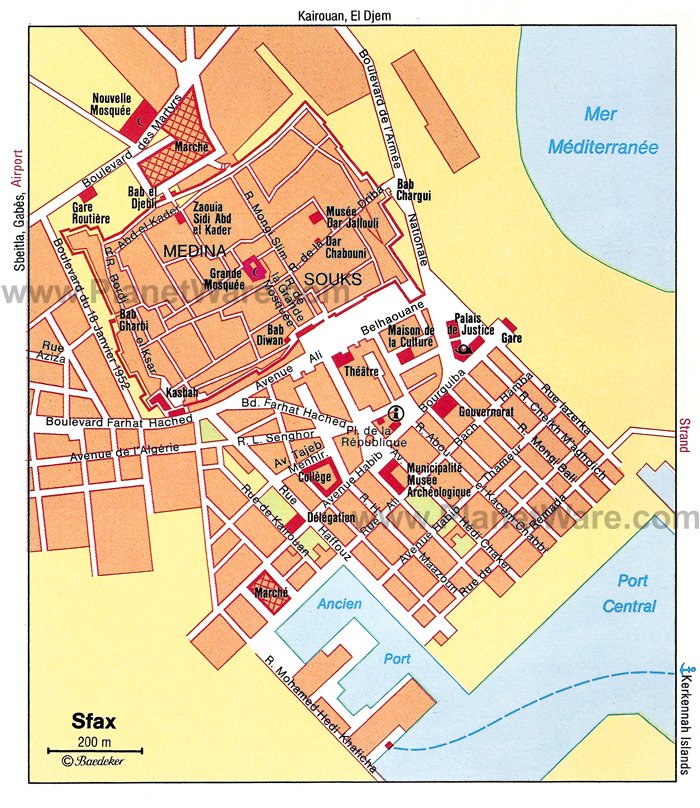