Edinburgh's parks provide green spaces for walking, picnicking, and sporting, but they also offer much more. Hilly Edinburgh has several excellent parks that overlook the historic city, including Holyrood Park, Calton Hill, and Blackford Hill, which offer views of Edinburgh Castle, the Firth of Forth, and other landmarks. These parks, as well as the expansive Meadows and Inverleith Park, host large festivals and sporting events throughout the year.

There are also a number of beautiful garden parks that provide picturesque backdrops, most notably Princess Street Gardens, at the foot of Edinburgh Castle, and the Royal Botanical Gardens located in northern Edinburgh. Others, like Braidburn Valley Park and Blackford Pond, offer a range of birdlife, from swans to linnet.

From an afternoon stroll to a full day of exploring, find what you are looking for in our list of the best parks in Edinburgh.

Edinburgh's largest and most prominent park, Holyrood Park sits on the east side of the center of Edinburgh. It encompasses 260 hectares, a great deal of which is its central hill, which was once a volcano. The highest point is called Arthur's Seat at 251 meters, which can be reached via a hike from any of several well-established trails. The views from Arthur's seat look down over Edinburgh Castle and the city to the west and to the Firth of Fourth to the northeast.

Visitors can access the main trails from several points along Queen's Drive, the most popular being the southern entrance, which provides access to the least strenuous trail to Arthur's Seat. This is also an easier approach for those who want to walk along the tops of the Salisbury Crags, the park's stunning volcanic cliffs. To see the cliffs from below, the approach is faster from the northwestern entrance, which is just behind the Palace of Holyroodhouse, a 16th-century palace and abbey.

The entrance near the palace is also closest to two of the park's more beloved landmarks, both of which can be reached without too difficult a walk. The first along the path is Mt. Margaret's Well, which dates back to 1860 and is considered a holy well. Beyond that are the ruins of St. Anthony's Chapel, most likely built some time during the 12th century.

Archaeologists have also found bronze and iron age artifacts in the park that are 7,000 to 10,000 years old. Tourists can learn more about the park's history at a good information center, which has exhibits about the area's history.

This 22-hectare green space has been a city park since the late 19th century, planned as a site for relaxation, recreation, and gardening. Located on the north side of the New Town area and adjacent to the Royal Botanic Garden, Inverleith Park is in the heart of Edinburgh's urban center. The park is a favorite sports ground for locals, with rugby, football, and cricket fields, as well as a running track and outdoor fitness equipment. Facilities also include four tennis courts, basketball courts, table tennis, and a pétanque court.

The park is split into four quadrants, and the northwest section is dedicated to fruit and vegetable garden plots for residents. Along the southern side of this area is Inverleith Pond, which has boating as well as a water garden and swans. Visitors can get excellent views of the city skyline from the pond, and there are plenty of benches.

Heading east from the pond is the Sundial Garden and a wildflower meadow, both lovely places for a picnic. The children's playground is not far from here, and visitors will also find vendors with refreshments in this area.

The Princess Street Gardens sit at the feet of Edinburgh Castle in the valley between the old city and the new city. Nor Loch once occupied the space, but the city began draining it in the 1770s, finishing in 1820. Wide paved paths lead throughout the park for full accessibility, roaming across fields of wildflowers, through wooded areas, and over streams and the railroad that divides the east and west sections of the park.

This park hosts many events each year, including Edinburgh's hogmanay celebrations and a large Christmas market each December. During the Christmas season, the space is turned into Winter Wonderland, where there is not only plenty of shopping but also an ice-skating rink and several other family activities, including a Ferris wheel. During warmer weather, there are numerous concerts at the Ross Bandstand.

The best place for visitors to enjoy views from is the Nelson Monument, which was built in 1816. This tower, which looks like a telescope set down on the hill, provides excellent 360-degree views of the city and surrounding landscape including Parliament, Holyrood Place, the Crags and Arthur's Seat, and The Firth of Forth with Leith behind it. Visible from the harbor, it has been used since 1852 to set ships' clocks by way of a Time Ball, and flags were also hoisted on the tower to make city-wide announcements. Today, the Time Ball still drops at 1pm six days a week, and the flag system is still used for royal notifications.

The unmistakable National Monument also sits on Calton Hill. Intended to be an exact replica of Athens' Parthenon, this Edinburgh landmark was begun in 1822 to commemorate soldiers killed in the Napoleonic Wars. Only a dozen columns were erected before construction ceased in 1829 due to funding. Despite numerous efforts to complete the project, it still stands only in partial form as if instead representing the partial ruins of the Greek building.

The City Observatory is another important landmark on Calton Hill, constructed in 1818 to resemble the Greek Temple of the Winds. The observatory was an important center of astronomical research, often considered a legitimate rival to the observatory in Greenwich. Although it fell into disrepair, restoration efforts in the past few decades have revived the site, and today it is restored. Visitors will find a good restaurant here, as well as casual food vendors and restroom facilities.

The Meadows stretches along the southern edge of Edinburgh's Old Town, just west of Holyrood Park. It is best known as the main venue for the Edinburgh Festival, held each year in August, but it also hosts numerous other events including traveling fairs, circuses, concerts, and other gatherings.

This is also a favorite spot for major sporting competitions thanks to its size and variety of playing fields and facilities, including cricket, football (soccer), and rugby, as well as tennis and croquet. The park is ribboned with walking trails and offers plenty of open grassy space to spread out, and there are also designated picnic areas with facilities. A large children's playground sits on the eastern side of the park.

After being transformed from an artificial loch into parkland, The Meadows became home to a stunning glass structure in 1886, when it hosted the International Exhibition of Industry, Science, and Art. Unfortunately, the building was taken down, and today visitors will find its last remnants on the west side of the park - pillars made of sandstone and topped with unicorns.

Those visiting the east side of The Meadows will want to stop by George Square Gardens, a lovely space on the grounds of the University of Edinburgh.

Locally known simply as "the Botanics," the Royal Botanic Garden is one of the most picturesque parks, providing both its own beautiful flora, as well as excellent panoramic views of the city of Edinburgh and the castle.

Covering over 70 acres are a variety of specialty gardens and natural areas for visitors to enjoy. Among its most notable are the Rhododendron Collection; the Arboretum; the Woodland Gardens, with its Giant Redwoods; and the Heath Garden, home to the Scottish Native Plants Collection.

There is also a lovely Rock Garden filled with mountain plants from all over the world; the Chinese Hillside, which features more than 1,600 varieties of plants native to China; and the Alpine House and Yard, which carefully tends to the special needs of Alpine flora. The Biodiversity Garden demonstrates the evolution of plant life, and the Demonstration Garden focuses on growing food; both are designed as educational exhibits.

Tropical flowers and plants can be found in the Glasshouse, and there is also a visitor center with a botanics shop, as well as the Inverleith House, an exhibition hall for artwork related to and inspired by the gardens. During the summer, various festivals and events are hosted here, and each Christmas season, trails are lit with festive lights.

Located in the Oxgangs/Morningside region of south Edinburgh, this lovely park occupies a section of the sloping valley formed by Braid Burn, a large brook that runs to the Firth of Forth. The park covers over 27 acres, home to grassy expanses, shady picnic areas, and even a wildflower meadow created by local children to encourage birds, butterflies, and bees to visit the park. Patient visitors might catch a glimpse of an otter or heron near the water, and in the evening, bats swoop in to clear away the insects.

Along the northwestern end of the park sits Fly Walk, a well-worn path that was once frequented by Robert Louis Stevenson. On the opposite corner of the park, rows of approximately 400 cherry trees form a trefoil shape. These trees were originally planted in 1935 by Girl Guides in honor of King George V, and each year, locals work together to replace the oldest of them.

Figgate Park sits in a wetland area on the northeastern side of the city once named Figgate Moor (Figgate Muir). Its central feature is Figgate Pond, with a paved walkway skirting the water, and Figgate Burn, a stream that runs into the nearby Firth of Forth.

This park is a popular spot for locals to walk and cycle, and visitors will find a picnic area, a children's playground, and a wildflower meadow. This is a particularly popular park with bird-watchers, who enjoy the resident waterfowl, including swans, moorhen, herons, and mallards. There are also a population of playful otters and other freshwater residents.

Located in Blackford Hill Local Nature Reserve, this park rises over the Morningside Neighborhood southwest of Holyrood Park. Although it is not quite as tall as its better-known neighbor, visitors will enjoy excellent views from Blackford Hill's vantage point.

There are numerous trails that wind through the park and up to the summit where you will find the National Observatory. Built at the end of the 19th century, the observatory is housed in a stunning building. It is still an active research facility and has a visitor center for those interested in its history and research; there is also an auto road to the observatory.

At the foot of the northwestern slope lies Blackford Pond, a wetland area home to a number of waterfowl including swans, heron, tufted and mallard ducks, and little grebe, as well as coot and moorhen. Bird lovers can also find skylark, linnets, and meadow pipit on the hill above. A broad paved path runs around the pond, providing many benches for resting and admiring the view. 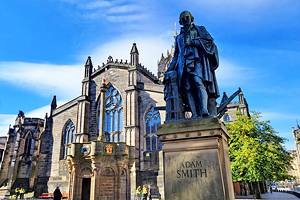 15 Best Free Things to Do in Edinburgh 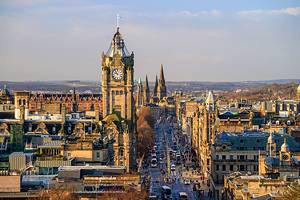 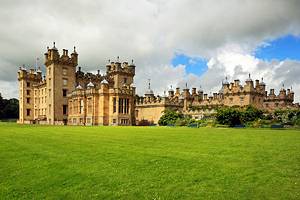 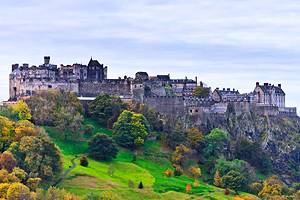 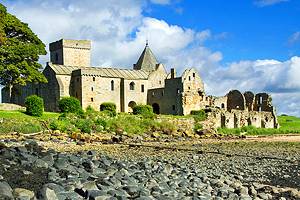 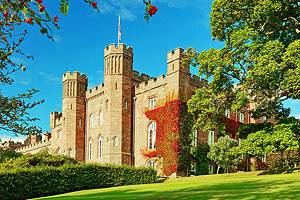 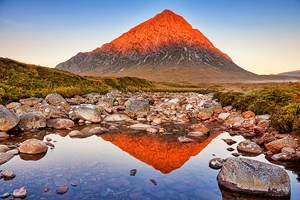