Written by Barbara Radcliffe Rogers
Updated Jan 16, 2021
We may earn a commission from affiliate links ()

Ravenna is like no other place in Italy, and the magnificence of its mosaics will leave you breathless - and with a stiff neck. Although Ravenna's port was already important as the base of the Roman Adriatic fleet, it reached even greater heights when Emperor Honorius moved his court here from Milan in 402, making Ravenna the capital of the entire Western Roman Empire.

Honorius and his sister, Galla Placidia, embarked on a building program and established the city as a center of mosaic art to embellish their new churches. It continued as the seat of sixth-century king Theodoric the Great, who had been brought up in Constantinople, and later, the seat of a Byzantine governor, so the artistic influences here were heavily Byzantine. Intricate mosaic work achieved some of its greatest heights here.

An astonishing amount of exquisite mosaics survive, most of them in seven buildings that form, along with the Tomb of Theodoric, a UNESCO World Heritage Site. The greatest danger is becoming overwhelmed by the sheer magnitude of mosaics, so that by the time you reach the last attractions, you simply cannot absorb any more. For this reason, it's a good idea to plan your visit over two separate days. But however you see Ravenna, you'll agree that it is unique among all the places to visit in Italy.

With so much to see here, you'll find this list of the top tourist attractions and things to do in Ravenna helpful in deciding which places to visit.

See also: Where to Stay in Ravenna

A good place to begin, both geographically and historically is this early fifth-century brick baptistery in the heart of the city. The octagonal building is one of the oldest in Ravenna, and it is considered to be the finest and most complete example of early Christian baptistery surviving today.

Intricate mosaics line its entire dome, culminating in a large mosaic medallion at the top picturing the Baptism of Christ by John the Baptist. Although not the largest display of mosaics in Ravenna, the baptistery makes up for it in dramatic impact.

Accommodation: Where to Stay in Ravenna

Don't be misled by the plain, somewhat drab exterior of San Vitale; the interior more than makes up for it. Step into the octagonal church, built in the first half of the 6th century, and behold one of the most important examples of early Christian Byzantine art and architecture in Western Europe.

Apart from a few Baroque frescoes added to the dome, the entire decoration is in mosaic, but the height makes its tiny tesserae blend together (as the artist intended) so they look like paintings. Only the luminous colors and liberal use of gold betray their secret. The 6th-century mosaics in the choir apse portray Justinian, his wife Theodora and their court; Christ is shown flanked by St. Vitalis (on the left) and St. Ecclesius. These mosaics are the largest and best preserved display outside of Constantinople itself.

From the soaring, bright, and almost overwhelming grandeur of San Vitale, step into the intimate afterworld of Galla Placidia, sister of the Emperor Honorius. It will take your eyes a minute or two to adjust to the dim light filtering through windows of sliced translucent agate into the vaulted cross-shaped mausoleum. The low arches and domes are lined with fifth-century mosaics made of the tiniest of tesserae, the figures in contrast against a deep blue background.

Over the door, Christ appears as the Good Shepherd, surrounded by mosaic sheep. Look for the apostles and for symbols of the four evangelists - the lion, eagle, ox, and angel. The marble sarcophagi are thought to be those of Galla Placidia, her husband and son, all of whom died in the fifth century. The UNESCO citation calls this "the earliest and best preserved of all mosaic monuments, and at the same time one of the most artistically perfect."

The walk across town to Sant'Apollinare Nuovo not only gives you time to rest your eyes, but to skip to the 6th century, when Theodoric had this basilica built as his cathedral. The walls of the long single nave are decorated with mosaics showing ships in the nearby Roman port of Classis on the left, and on the right Ravenna, with its churches and Theodoric's palace.

Take advantage of the chairs along the wall to look up at the mosaics high on the walls above, showing saints, prophets, and New Testament scenes. Before leaving, step into the cloister to see the fascinating exhibits on the creation of mosaics, where you can see the materials and techniques, along with samples of the almost infinite gradations of color the artists work with.

About halfway between the Neonian Baptistery and Sant'Apollinare Nuovo, the Franciscan church of San Francesco is easy to spot for its tall 10th-century Romanesque tower. It's worth a stop for several reasons, not the least of which is the spooky flooded crypt. Look also for the 16th-century stone columns carved by Tullio Lombardo and in the left aisle for frescoes by the early 14th-century painter Pietro da Rimini.

In the churchyard, it's hard to miss the large tomb of Dante, the great Italian writer who was the first to promote the use of a single Italian language. Prior to Dante, who died here in 1321, residents of different regions in Italy couldn't understand each other and travelers needed to ask directions in several different languages. Today's tourists should at least stop to say thank you, and maybe visit the little Museo Dantesco.

The small octagonal brick baptistery that Theodoric built next to his cathedral later became an oratory dedicated to the Virgin Mary called Santa Maria in Cosmedin. Although part of the UNESCO site, the remaining sixth-century mosaics in the dome depicting the Baptism of Christ have been greatly restored over the centuries.

Surrounding the baptismal scene are mosaic images of the Twelve Apostles and a throne with a cross. The baptistery has sunk into the ground over the centuries, and their decorative elements on its walls have disappeared.

Adjoining San Vitale and a pleasant interlude between gazing at mosaics overhead, the museum housed in the elegant cloisters of the former Benedictine Monastery has excellent collections of carved ivories, textiles from the Coptic to Renaissance periods, icons, and ancient weapons. Several of the museum's treasures relate to the UNESCO sites, including the cartoon (original drawing) for the mosaic of Sant'Apollinare in Classe.

Particularly interesting is a cycle of 14th-century frescoes of Santa Chiara, a masterpiece by Pietro da Rimini, preserved from the convent church of the Poor Clares in Ravenna. The museum is handicapped accessible.

When your neck is tired from looking up at mosaics, give it a rest by looking down at the beautiful mosaic tile floors of a prosperous Roman home of the fifth and sixth centuries. Unlike the Byzantine mosaics in churches and religious buildings, these are of marble tesserae, set in a mix of geometric patterns and detailed scenes, such as the Dance of the Four Spirits.

The mosaics were discovered in 1993 while excavating for a parking lot and are about three meters below street level. Raised walkways allow visitors to see the floors at close range without walking on them. Descriptive and interpretive signage for the 14 rooms are in Italian, but an audio guide in English is available.

The domus is accessed through the 18th-century church of Sant'Eufemia, and is wheelchair accessible.

Near the cathedral and Neonian Baptistery is the Archbishop's Palace, inside which is the Archiepiscopal Chapel, the smallest of the eight Ravenna attractions cited by UNESCO. The bishops' private oratory, built around the turn of the sixth century, is in the shape of a Greek cross.

The lower walls are covered in marble, above which are mosaics that date to the time of its construction. Also in the palace, a small museum holds a sixth-century Egyptian throne with reliefs of carved ivory.

When your eyes and neck weary of mosaics, give them a rest by walking to Ravenna's only UNESCO-cited attraction without a single tessera. At the north end of Via Roma stands the early 6th-century tomb Theodoric planned for himself, a monumental two-story rotunda.

This remarkable piece of late Roman architecture is built of marble and capped by a single stone more than 10 meters in diameter, weighing around 3,000 tons. The walk is about 800 meters, but you can also take bus number 5, 18, or 90 from the railway station.

About six kilometers south of Ravenna's center on the road to Rimini, the imposing round campanile of Sant' Apollinare in Classe stands high above the flat landscape. Built in the mid-sixth century, just outside Ravenna's ancient Roman port, the church is decorated by the last examples of the city's mosaics, commissioned between 673 and 679. These add to the earlier mosaics completed when it was built.

If you think you've seen the panel in the apse showing the commissioning bishop Reparatus with Emperor Constantine IV before, you have: it is clearly imitating the one of Emperor Justinian in San Vitale. In the aisles, marble sarcophagi of archbishops show the changes in styles between the fifth and eighth centuries. Notice the bronze window-grating in the crypt.

For a historical treasure hunt, look for the ancient pagan tombstones that were reused in the church's construction. Close to the church, you can visit the remains of the Roman port of Classis, interpreted in very good English and Italian signage.

Northeast of Sant' Apollinare, near the station, which suffered heavy damage during the Second World War, the church of San Giovanni Evangelista was founded by Galla Placidia in 424. Unfortunately, bombs aimed at the train station destroyed much of the church, but it was rebuilt in its original form after the war. It still has many original features, including most of the columns and their carved Byzantine capitals.

Many of the early mosaics had been lost to renovations in the 16th century, but many of those completed in 1213 still survive. Mounted on the walls are mosaics depicting mythical animals, medieval stories, and historical scenes. Look in the left aisle for a chapel with fragments of 14th-century frescoes on its vault, which have been attributed to Giotto, but are more likely by a Rimini artist of the same era.

Visiting Italy's largest amusement park - it covers 850,000 square meters of land - is Ravenna's top thing to do with children. This family attraction has rides for all ages, from the adrenaline rush of thrill rides to slower rides for younger children.

Where to Stay in Ravenna for Sightseeing

We recommend these hotels in Ravenna with easy access to the city's tourist attractions:

Tips and Tours: How to Make the Most of Your Visit to Ravenna

Places to Visit near Ravenna: Some of the best beaches in Italy stretch along the Adriatic Sea, where miles of white sand is lapped by gentle waves. These mark the coast north of Ravenna and extend south to the ancient Roman center of Rimini, where you'll find Roman sites and two children's attractions: the Fiabilandia theme park and Italia in Miniatura with miniature reproductions of Italy's most famous attractions.

Where to Go from Ravenna: The independent principality of San Marino sits atop a rocky crag not far beyond Rimini. Heading northwest from Ravenna, Bologna is about an hour's drive or train ride. Known for its outstanding restaurants and local cuisine, Bologna is a city of elegant colonnades that line many of its streets. 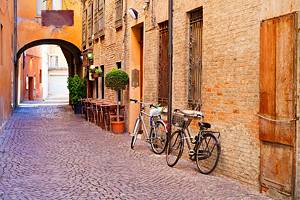 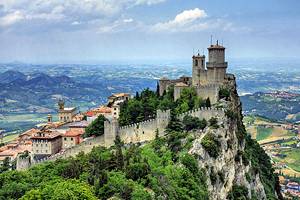