Written by Barbara Radcliffe Rogers
Updated Jan 31, 2022
We may earn a commission from affiliate links ()

One of Europe's finest building ensembles–the Cathedral of Santa Maria del Fiore, Giotto's Campanile, and the Baptistery–fills the center of Piazza del Duomo, their dazzling walls of inlaid, colored marble overshadowing the buildings that surround the square.

The piazza and the adjoining Piazza San Giovanni with the Archbishop's Palace, are overlooked by several imposing buildings, including the Loggia del Bigallo, the Palazzo della Misericordia, the Palazzo dei Canonici, the Palazzo Guadagni, the Palazzo Niccolini, and the Museo dell'Opera del Duomo, where you'll find the original masterpieces that have been taken from the duomo complex to protect them from environmental damage.

This is the best place to begin exploring Florence, both for an introduction to its art and history and–for those with a head for heights–panoramic views from atop the dome and campanile.

From the first look at its multicolored marble façade and the immense dome towering above, it's easy to see why the imposing Duomo, the Cathedral of Santa Maria del Fiore, is one of the most important tourist attractions in Italy.

Filippo Brunelleschi's magnificent dome stands out above the city, dominating the skyline, and has become the symbol of the city itself. At more than 152 meters in length, this is Italy's third-largest church, but it's the artistry that earns the Duomo's distinction as one of Europe's top landmarks.

The Baptistery of St. John, more often just called The Baptistery, dates from the middle of the 12th century and took 70 years to complete. Like its neighbors in the piazza, its exterior is wrapped in inlaid marble, which along with its exquisite bronze doors and interior mosaics form its chief attractions.

The bronze doors on its three portals–works of sculpture unsurpassed in the Western world–were added in the 15th century. Most famous are the doors by Lorenzo Ghiberti. Competition for their design was fierce, and Ghiberti beat six others, including Brunelleschi and Jacopo della Quercia for the first of the commissions, for the north portal.

Although he followed the design of Andrea Pisano's earlier south portal doors, creating square panels each with a Gothic relief, the grace of his figures and the liveliness of his expression far exceeded Pisano's. Look particularly at the top left panel of the right-hand door for the vivid Resurrection and the right panel of the fifth row down for Christ among the Doctors. On the left door, in the fifth row, the right panel shows an especially beautiful Nativity scene. Ghiberti also designed the bronze frame with small heads at each intersection.

But Ghiberti's masterpiece, the work for which this prolific artist is best remembered, is the series he created for the east doorway, facing the Cathedral of Santa Maria del Fiore. Michelangelo praised it as fine enough to be the "Porta del Paradiso," and because of his description, it has been called the Gate of Paradise ever since.

Nowhere else has a sculptor used bronze so perfectly and expressively as in these doors, created between 1425 and 1452. In each of the panels, you'll see Ghiberti's mastery of perspective and composition, as well as the way he has given each individual figure expression and character. He has created entire narratives within a single small panel.

Look for a self-portrait among the prophets and sibyls in the framing, the fourth portrait from the top in the middle row on the left door. Or for a better look, see the originals (these are exact replicas) inside the Museo dell'Opera del Duomo.

The south portal is the oldest, designed by Andrea Pisano between 1318 and 1330 with scenes from the life of John the Baptist. The workmanship in his 28 square Gothic panels is more reminiscent of the goldsmith's art. The framing decoration by Vittorio Ghiberti, son of Lorenzo, hints at artistic forms to come in the Renaissance, with foliage, creatures, and fruit.

Give your eyes time to adjust to the dim lighting before taking in the mosaics that completely line the inside of the octagonal dome. Some of Florence's greatest 13th-century artists created these, including Cimabue and Andrea di Riccio, and its richness places it among the greatest mosaics in the Western world.

Prominent above the choir chapel is the gigantic figure of Christ–the face alone measures eight meters–at the Last Judgment. The scene of angels, apostles, prophets, and saints, with Mary and John the Baptist against the realm of the Devil, looks like an illustration for Dante's Inferno, and there is a connection: Dante was a Florentine poet, and this mosaic was created during his lifetime, so the influences on both arts were the same.

Look also for a Donatello masterpiece, the tomb of the Antipope John XXIII, and for the zodiac and metallic decoration on the marble floor. On the high altar is a candlestick in the form of an angel.

Over the ages, priceless works of art have been created for the cathedral, the Campanile, and the Baptistery, including paintings, gold and silverwork, sculpture, and embroidery, much of it by notable masters. Concerns over weathering and security led cathedral officials to create a museum where the more vulnerable of these could be safely displayed, along with precious gifts from benefactors.

Since 1891, these have been housed in the former studios and workshops of the artists and craftsmen working on the cathedral, which has more recently been fitted with climate control and security systems not possible in the church buildings. There are so many treasures in this museum that you may not want to spend the time to see them all (especially as the combined ticket allows you only 24 hours to see all six sites). These are the undisputed highlights of this museum:

The late-Gothic building was commissioned by the Confraternity of Mercy as a place for lost or abandoned children awaiting adoption. The marble loggia at the corner was built between 1353 and 1358, and has painting inside the arches.

The Palazzo Nonfinito (Unfinished Palace) was commissioned by Alessandro Strozzi as a new and grandiose townhouse for his family, but because of its size, neither its architect, Bernardo Buontalenti, nor his successors were able to complete it.

Today, it houses one of Europe's most important anthropological museums, the Museo Nazionale di Antropologia e Etnologia, with exhibits covering the world. Exhibits include Peruvian mummies, a history of mask making, musical instruments from around the world, and Maori artifacts from New Zealand. Many of the exhibits are labeled in English.

Tips & Tours: How to Make the Most of Your Visit to Piazza del Duomo

Places to Visit in Florence: Close to the Piazza del Duomo is the Medici church of San Lorenzo, and several other important churches in Florence are within walking distance. Not far away, the Piazza della Signoria is another great square worth exploring. To find the best hotels for sightseeing, see our page on Where to Stay in Florence.

Where to Go from Florence: A number of places to visit, including the Medici villas, are easy day trips from Florence. These villas have some of the most beautiful gardens in Italy. The attractions of Siena are not far away, and in Pisa you can see the Leaning Tower. These and the beautiful hill towns are among the most popular attractions in Tuscany. 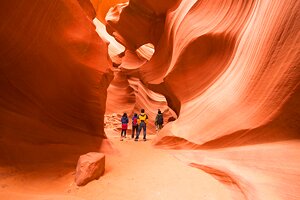