Rising from the Plain of Thessaly in mainland Greece, Metéora is a mesmerizing group of vertical rocks, reaching up to 300 meters high, which time has twisted into bizarre and beautiful formations. And perched atop these rocks are the monasteries of Metéora, constructed from 1356 onwards, which appear to hang in the air above the rocks, and are some of the most fairy-tale, magical places to visit in all of Greece.

There were once 24 monasteries, but that number has dwindled over the centuries, and today there are just six monasteries that are still occupied.

One of the best ways to explore these sacred sites, which have been proclaimed a UNESCO World Heritage Site, is on foot, hiking between them. Just remember, while this experience may be one of the top things to do in Greece for tourists, for the monks, these structures are places of peace, prayer, and meditation, and respect is paramount. Plan your experience touring these unique attractions with our list of the top things to do at the Metéora Monasteries.

The biggest and most visited of the remaining monasteries, The Great Metéoron was founded by Athanasios the Meteorite in 1356 and enlarged in the second half of the 14th-century by his disciple and successor Ioasaph, son of Serbian King Simeon. It is in a wonderful setting, with stunning views across the surrounding landscape. The tombs of both Athanasios and Ioasaph are in the frescoed church here.

There is also an on-site museum, which besides displaying religious icons and books, highlights the role of the Orthodox church in Greece's struggle for freedom from the Turks. It also illustrates the Greeks' resistance to the Germans in WWII.

It is also possible to visit The Great Metéoron and the other monasteries on a guided tour, like the half-day Panoramic Meteora and all Monasteries Tour from Kalabaka. Joining a small group excursion allows you to learn the backstory behind what you are seeing from a local guide.

Perched atop a 373-meter cliff and reached from the other side by climbing 195 steps, Varlaam is the second biggest monastery, after the Great Metéoron. The monastery was founded in 1517 on the site of the old hermitage of the hermit Varlaam (from whom it takes its name).

The monastery was built by two brothers, Theophonais and Nektarios Apsaradas, who were monks. They also enlarged the original chapel, and in 1548, Byzantine iconographer Frangos Kastellanos decorated the monastery.

Inside, you can visit the serene 16th-century church complete with frescoes, many of which were painted by Kastellanos, and the old refectory, which houses a small museum. There is also a second church on the north side of the grounds that is dedicated to the Three Bishops and is referred to as the Chapel of the Three. It has a square-shaped cross on its roof and was constructed in 1627.

The Monastery of the Holy Trinity is probably the most visually dramatic monastery and is approached by climbing up 140 steps. If it looks familiar, it was featured in the hanging-basket scene of the James Bond film, For Your Eyes Only (1981). It's one of the most difficult to access of the Meteora monasteries due to the steepness of the trail and the steps. But once you reach the top, you will be rewarded with stunning panoramic vistas over the Plain of Thessaly and Kalabaka about 300 meters below.

Founded in 1438, its main church is much newer, dating from 1798. In 1909, a group of Greek archaeologists surveying the grounds discovered a crypt with 47 rare parchments and ancient codes. The monastery was heavily damaged during WWII but extensively renovated in the 1970s.

The closest monastery to the village of Kastraki at just one kilometer away, St. Nicholas makes for another super dramatic photo. It is approached by climbing a steep hill, followed by a flight of steps. Founded in 1368 and enlarged in 1628, it is much-loved for its tiny church, decorated with incredible frescoes painted by the Cretan artist Theophanes in 1527, the most memorable depicting "Adam naming the Animals."

The Monastery of Rousanoú stands boldly perched upon a slender pinnacle of rock. Dedicated to the "Transfiguration" but honored to Saint Barbara, Rousanou was probably built in 1288 and renovated as a monastery in 1545. The monastery was heavily damaged in WWII fighting but restored in the 1980s. It became a convent in 1988, and is inhabited by nuns who tend its lovely, small garden.

The monastery is comprised of one main building that takes up the cliff's whole surface area, giving it the impression of being carved out of the rock. In an effort to increase interior space, the building was built in three levels.

The most accessible of all the monasteries, St. Stephen's is approached via a footbridge and requires no climbing of steps. In an awesome setting, with spectacular views over the valley (from the balcony), it stands close to the Monastery of the Holy Trinity. The nuns who live here are welcoming and keep it in perfect order, with a beautiful chapel adorned with frescoes and ornate golden details.

The best way to explore Metéora is on foot, hiking from monastery to monastery. This allows you to really immerse yourself in the scenery and experience of this UNESCO World Heritage Site. You'll want to wear sturdy walking shoes and bring water.

If you aren't up for hiking on your own, or you want to get some perspective on what you are seeing from a local guide, join an organized hiking trip. Companies like Visit Meteora Travel offer small-group, half-day guided hiking adventures to the monasteries that include transport.

The most convenient base for visiting the Metéora monasteries, thanks to its choice of sizeable hotels, guest houses, and restaurants, the town of Kalambáka (Kalampaka) (Kalabaka) caters to groups of tourists and pilgrims, and thrives primarily on tourism. If you are staying here, you can easily take a four-hour guided tour to see the monasteries and landscape.

More authentic than Kalambáka (which lies just two kilometers away), the unspoilt village of Kastraki is built into a hillside below two massive rocky pinnacles and is an attraction in itself. Made up of mid-19th century cottages with terra cotta tile roofs and wooden window shutters, Kastraki is a conservation village, so new building is restricted. From here, a marked footpath leads up to the monasteries.

Where to Stay in Metéora for Sightseeing

There is accommodation in the villages around the Metéora monasteries, like Kalambaka and Kastraki, although options are limited – you aren't going to find any five-star hotels here. That said, the guesthouses and hotels recommended here offer easy access to sightseeing in this magical destination.

Greek Islands: A visit to a couple of the 6,000 Greek Islands is definitely a highlight of a holiday in Greece. One of the most popular islands, especially if you want to splurge, is Santorini, which is as beautiful as its reputation leads you to believe. Another gorgeous Greek isle destination is Kefallonia. Learn more about it with our piece on the Top-Rated Tourist Attractions on Kefallonia. 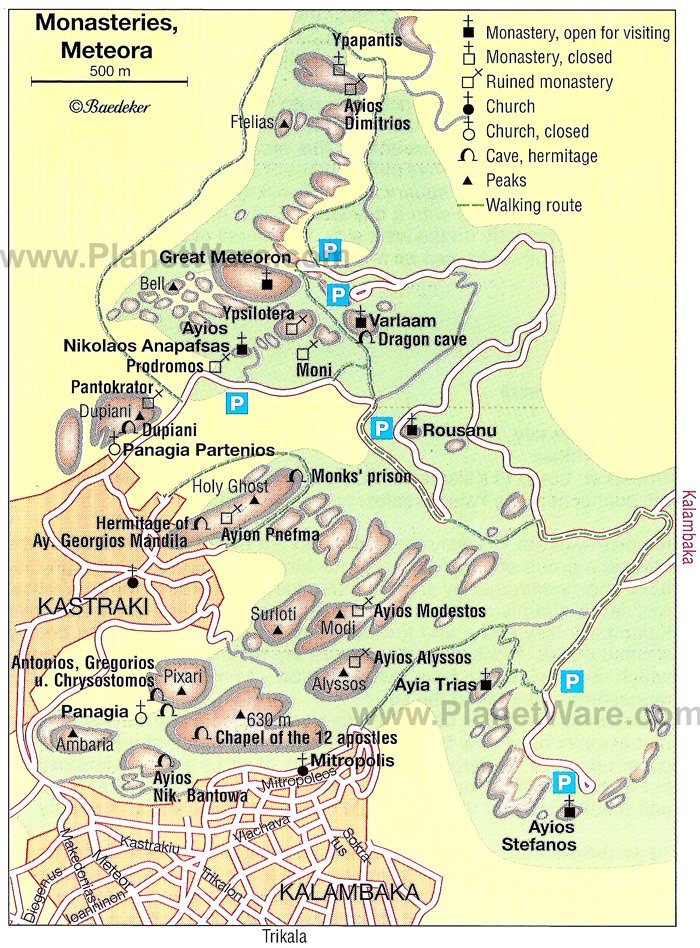 20 Top-Rated Attractions & Things to Do in Athens
Recent Articles

22 Most Beautiful Islands in the World
BE INSPIRED!
MORE PICTURES OF GREECE