Written by Lisa Alexander
Updated Sep 13, 2021
We may earn a commission from affiliate links ()

An enchanting world of Moorish charm awaits visitors who travel off the beaten path to the picturesque Pueblos Blancos of Andalusia. These small, quiet hilltop villages are distinguished by their simple whitewashed houses. The architecture derives its influence from North Africa (present-day Algeria and Morocco), the Moors' native land.

Surrounded by a pristine mountainous landscape and full of old-world romance, the Pueblos Blancos barely make it onto most Andalusia tour itineraries but are certainly worth the extra effort and time to visit.

After sightseeing in Andalusia's touristy cities of Seville, Granada, and Córdoba, the Route of the Pueblos Blancos offer a welcome escape to nature and a more relaxing pace. However, the only way to arrive here is by car, or by long-distance hikes, which take considerable preparation and physical fitness.

Learn about the best places to visit in this charming area, with our list of the top Pueblos Blancos of Andalusia.

The gateway to the Route of the Pueblos Blancos, this beautiful hilltop village has been declared a National Historic Monument. The village's buildings are arranged in a semicircle on a hillside at the edge of a cliff above the Río Guadalete.

Characteristic of an old Moorish town, Arcos de la Frontera has simple cubic whitewashed houses and a Moorish fortress. The castle dates back to the 11th century but was later rebuilt after the Christian Reconquest.

There are also several exquisite churches from a later period. The 14th-century Iglesia de San Pedro, dramatically standing above a steep cliffside, is decorated with fine paintings.

At the center of town on the Calle Deán Espinosa, the Basílica de Santa María de la Asunción, built in the 14th century on the site of a Moorish mosque, blends a variety of architectural styles, including Gothic, Plateresque Renaissance, Mudéjar, and even 17th-century Baroque details.

Arcos de la Frontera is also known for its lively Easter festival, as well as its delicious regional cuisine.

For a pampering hotel experience, travelers should stay at the Parador de Arcos de la Frontera. This luxury hotel is housed in a splendid historic building (formerly the local magistrate's house) overlooking the Guadalete River. The hotel has a sumptuous interior adorned with wood-beamed ceilings and classic decor, an outdoor terrace that affords awe-inspiring views, and an elegant restaurant that serves local specialties.

Accommodation: Where to Stay in Arcos de la Frontera

Perilously clinging to a sheer cliff, Ronda stands at a dizzying height and offers thrilling views of the dramatic landscape. About 85 kilometers from Arcos de la Frontera, the town straddles the El Tajo Gorge, with the emblematic Puente Nuevo (New Bridge) crossing the jaw-dropping 150-meter-deep ravine.

Besides its spectacular setting, Ronda is famous for bullfighting. The town's Plaza de Toros is Spain's second oldest bullring. Ernest Hemingway immortalized the appeal of Ronda and its bullfighting tradition in several of his novels.

In the old town (La Ciudad), the narrow, labyrinthine streets and whitewashed buildings reveal a rich Moorish inheritance. The ancient Arab Baths in the Barrio de San Miguel are further proof of the Islamic influence. Another interesting historical narrative is the story of the town's bandits, illustrated at the Museo del Bandolero (Bandit Museum).

During spring and summer, Ronda comes to life with its festivals. The Feria de Pedro Romero festival in September features a parade of women dressed in Goyesque (18th-century Spanish) costumes and a traditional Goyesque bullfight.

At the end of August and in early September, the Ronda International Folk Gala delights audiences with folk dance performed by groups from over 50 countries.

Other events include the festivities and religious processions during Semana Santa (Holy Week) around Easter.

Accommodation: Where to Stay in Ronda

3. Grazalema: A High-Mountain Village in a Natural Park

Grazalema is a picturesque high-mountain village of the Cádiz province (50 kilometers from Arcos de la Frontera), nestled in a valley and surrounded by the Parque Natural de Sierra de Grazalema. This expansive natural park covers more than 53,000 hectares and is listed as a UNESCO Biosphere Reserve, as well as a "special protection zone" for birds.

One of the best places to visit for Moorish ambience, Grazalema is a delightful cluster of quaint whitewashed houses, narrow alleyways, and quiet squares. The maze of pedestrian streets leads to homes with colorful potted flowers bursting from windowsills, and astounding views of the craggy mountains in the distance.

The village is also well known for its artisan crafts and the Mantas de Grazalema textile factory museum.

Perched high above the Río Barbates and only 10 kilometers from the sea, the hilltop village of Vejer de la Frontera is one of the prettiest of the Pueblos Blancos. Many spots in the village offer panoramic vistas of the coastline. This medieval fortified town was under Muslim rule for six centuries.

A distinctive Moorish influence is found throughout the village in its Mudéjar architecture; leafy palm trees; winding cobblestone streets; arched passageways leading through the old ramparts; and boxy, whitewashed houses with flower-bedecked courtyards.

Because of its rich heritage, the village is designated as a Historical Artistic Monument. The 10th- to 11th-century Moorish castle is a top attraction along with the Arch of Segur; the Judería (old Jewish quarter); and the Plaza de España, a fountain-adorned town square.

The village has two noteworthy churches: the Iglesia del Divino Salvador (built on the site of a Moorish mosque) and the Santuario de la Nuestra Señora de la Oliva, which celebrates the Feast of the Assumption on August 15th with a procession led by the church's precious Virgin Mary sculpture.

Accommodation: Where to Stay in Vejer de la Frontera

5. The Historic Monuments of Medina Sidonia

The main tourist attractions of the village are its Gothic church, the Iglesia de la Santa María de la Coronada, which has an impressive Plateresque retablo; the ruins of a 13th-century Moorish alcazar (castle); the ancient ramparts; and the Roman bridge.

The village also has several other historic churches: the 17th-century Convento de las Descalzas, which has an exquisitely decorated dome, and the 7th-century Ermita de los Santos Mártires (hermitage), one of the region's oldest churches.

The serene Monasterio de San José del Cuervo stands outside of the village in a remote and peaceful environment.

The stunning little village of Zahara de la Sierra is set into a steep hillside at the heart of the Sierra de Grazalema mountains. This area falls within the Parque Natural Sierra de Grazalema, a 54,000-hectare UNESCO Biosphere Reserve.

The town dates back to Moorish times and has endured a turbulent history because of the conflicts between Islamic and Christians rulers. By the 15th century, the Christians reconquered Zahara de la Sierra with help from Don Fernándo. The town is 55 kilometers from Arcos de la Frontera in the province of Cádiz.

The village is famous for its Fiesta del Corpus Christi (around Easter), a religious festival featuring elaborate decorations all over town. This traditional festival has become a popular tourist attraction.

Spring and summer bring blooming fields of wildflowers in the surrounding countryside, which enhances the wonderful vistas found from many viewpoints in the village.

At the foot of a rocky massif, Villaluenga del Rosario is a high-mountain town in the magnificent Sierra de Cádiz (about 13 kilometers from Grazalema). The village is located within the UNESCO-listed Sierra de Grazalema Natural Park.

This typical whitewashed village has a small 16th-century church, the Iglesia de San Miguel. The village also boasts the oldest bullring in the province of Cádiz, which is constructed entirely out of stone.

Tourists can travel just outside the village to the Cuevas de la Manga, prehistoric caves where remains of the Neolithic era were found. The mountainous area surrounding Villaluenga del Rosario is also a great place for outdoor adventures such as hiking and mountain climbing.

On the balmy "Costa Tropical," Salobreña is tucked into a hillside that overlooks the Mediterranean Sea. The small historic town of Salobreña is a tightly packed collection of whitewashed buildings, presided over by an ancient Moorish castle on the hilltop.

Visitors will enjoy the charming village ambience and stunning seaside panoramas combined with great weather and a beautiful natural environment. Because of the warm climate, exotic tropical fruits and sugar cane flourish in this area.

About two kilometers from the village of Salobreña are several fabulous, expansive beaches with mild waters and good tourist facilities. This marvelous coastline attracts travelers who enjoy outdoor activities, especially water sports such as scuba diving and windsurfing.

Salobreña is 68 kilometers (a 45-minute drive) south of Granada.

Superb accommodations are available at the Parador de Nerja (35 kilometers from Salobreña), which offers amazing sea views from its clifftop vantage point. This four-star hotel features a gorgeous garden, an outdoor swimming pool, and a fine-dining restaurant that serves authentic Andalusian cuisine.

This lovely, Moorish, whitewashed village is perched on a hilltop in the Sierra de Grazalema natural park. The oldest part of Benaocaz, the Barrio Nazarí dates back to the 8th century and has a typical Arabic character, seen in its maze of narrow, winding streets and pedestrian staircases.

Top attractions are the Aznalmara Castle, built in the 13th and 14th centuries; the tiny San Blas chapel; the hilltop hermitage of El Calvario, with its sweeping views of the countryside; and the San Pedro Apóstol parish church, an excellent example of 16th-century Renaissance architecture.

The area outside of the village has many scenic hiking paths and walking routes, including a trail along the ancient Roman Road. Benaocaz is 46 kilometers from Arcos de la Frontera.

A short drive from Ronda (less than 20 kilometers away), Setenil de las Bodegas is a worthy detour. This surprising Pueblo Blanco grew out of a collection of cliff-enclosed cave dwellings hewn from rock. Entire blocks of whitewashed buildings are submerged under massive, naturally occurring rocky overhangs.

Setenil de las Bodegas has been settled since the Moorish Almohad period of the 12th century. A legacy of the Islamic heritage, the ruins of a Moorish castle overlook the medieval village.

Quintessential Andalusia: Most travelers visiting the Pueblos Blancos will also want to see the sights of Andalusia on their vacation itinerary. The enchanting city of Seville (about a 90-minute drive from Arcos de la Frontera) dazzles visitors with its old-world ambience and flamboyant festivals. Highlights include two UNESCO World Heritage Sites: the Catedral de Sevilla, a glorious Gothic cathedral, and the Real Alcázar, a lavish Moorish palace surrounded by lush Andalusian gardens.

Other Highlights of Andalusia: This distinctive region of Spain boasts splendid historic cities. Just over a two-hour drive from Ronda, Granada astounds visitors with its fascinating multicultural heritage and the breathtaking Alhambra, a Moorish citadel built on a hilltop backed by snowcapped mountains. Córdoba (about a two-hour drive from Setenil de las Bodegas) is renowned for its UNESCO-listed 8th-century mosque, ensconced within an atmospheric old town.

Seaside Cities and Sunny Beaches: Near the Pueblos Blancos are interesting seaside destinations along the Costa del Sol and the Costa de la Luz. A 40-minute drive from Jerez de la Frontera or Medina Sidonia, the elegant seaport of Cádiz is surrounded by gorgeous beaches. The resort town of Marbella (about a one-hour drive from Ronda) has posh beach clubs and a quaint historic center. Málaga (a one-hour drive from Marbella) is an authentic Mediterranean seaport with a sandy beach, palm-fringed seaside promenades, and waterside restaurants that serve delicious seafood. 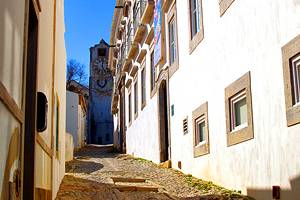 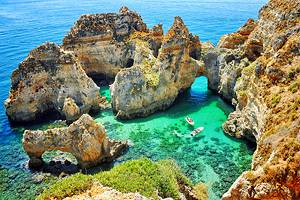 14 Top-Rated Attractions & Places to Visit in the Algarve