Written by Lisa Alexander
Updated May 20, 2021
We may earn a commission from affiliate links ()

The lush landscape of the Alhambra in Granada was like heaven on earth for the Moors, who arrived here from the deserts of North Africa beginning in the 13th century. Majestic snowcapped Sierra Nevada Mountains provide a gorgeous backdrop and the source of the Río Genil. This pristine, flowing freshwater became a symbol of abundance.

Known in Arabic as Medinat al-Hamra, the ''Red City,'' because of the color of the stone buildings, the Alhambra is a breathtakingly romantic sight. This citadel, with its complex of palaces, is one of the best places to visit in Andalusia to admire Islamic architecture. The intricately decorated rooms and serene courtyards represent the finest achievements of Moorish art in the world.

The artistic splendor of the Alhambra finds its finest expression at the Palacios Nazaries, built for Mohammed ben Al-Hamar in the 13th century, and home of the Nasrid Dynasty of Sultans until the 15th century. These splendid Nasrid Palaces are the glory of the Alhambra, their exquisite interiors filled with ornately decorative Islamic tiling and stucco work.

Beautifully laid out in three sections, the Palacios Nazaries are made up of the Palacio Real (Royal Palace), the Palacio de Comares (Palace of Ceremonial Rooms), and the Palacio de los Leones (Palace of the Lions, which was the Sultan's private quarters). In each section, all the rooms open onto a central courtyard in typical Andalusian style.

Because of its extraordinary cultural value, the Alhambra complex is a designated UNESCO World Heritage Site. This vast fortified complex also includes the striking Palacio de Carlo V; the luxuriant Generalife Gardens; and the Alcazaba ruins, with breathtaking views over the city.

Read our list of the top attractions at the Alhambra, so that you can plan your visit and make the most of your experience.

See also: Where to Stay near the Alhambra

The oldest part of the Nasrid Palaces, this section is also the most changed by later uses. The azulejo-clad audience chamber and courtroom was used for the public administration of justice and for large assemblies.

After the Christian conquest, this space was used as a chapel, and you can see the balustraded balcony that was once the choir.

On the left of the adjoining Patio del Mexuar is the Cuarto Dorado (Golden Chamber), which features one of the finest facades of this Alhambra palace. This area is all that remains of the Palacio Real; the other rooms of this palace were destroyed by Yúsuf I or his son Muhammad V.

The Patio del Mexuar leads into the Patio de los Arrayanes, also called the Patio de los Mirtos because of the hedges of myrtle around the central pond. This spacious courtyard features graceful arcades at each end, as well as two fountains, which feed the pond. Most of the inscriptions around the patio are praises to God.

The courtyard's white marble patio encloses a pond, which reflects the building's facade in its placid waters. The parapet above the northern gallery reflects in the pool on a clear day, making a lovely photo op.

Between the walls of the Sala de la Barca and the adjoining hall is a narrow passage with two doors, and the left door leads to the higher chambers of the tower. The Torre de Comares is the tallest of the remaining towers of the Alhambra. It's named for the stained-glass windows of the balconies called "comarías," which illuminate the grand hall inside the tower.

The tower offers splendid views of the landscape. It is said that Boabdil, the last Moorish ruler of Granada, negotiated his surrender to the Catholic Monarchs here after taking in a final glimpse of the beautiful scenery.

Inside the Torre de Comares, the Sala de los Embajadores is one of the most exquisite rooms in the Alhambra. It was a throne room and where the rulers of Granada received foreign envoys. A magnificent larch-wood dome and the multitude of tall windows give the space an ethereal quality.

The most striking feature of the decor is its profusion of ornamentation, with more than 150 different patterns, including verses from the Koran, floral details, and geometric themes.

This hall is also inside the Torre de Comares. The origin of its name is the Arabic word baraka, which means blessing but degenerated into the Spanish word barca, which means boat.

The rectangular hall is 24 meters long by 4.35 meters wide but was originally smaller and later extended by Mohammed V. A semi-cylindrical vault was destroyed by a fire in 1890 and replaced by a copy completed in 1964.

The walls feature plasterwork with the Nasrid coat of arms including the word "Blessing" and the dynasty's motto "Only God is Victor."

From the southeast corner of the Court of Myrtles, a path leads through the Sala de los Mozárabes into the Patio de los Leones. This patio is the central feature of the Palacio de los Liones, the royal winter residence built by Mohammed V, with the adjoining Harem.

In the center of this spacious court is the famous Lion Fountain, which features twelve marble lions. Around the courtyard, the arcading, with its 124 columns, has an extraordinary sense of lightness and delicacy.

On the north side of the Court of Lions, the Sala de las Dos Hermanas, along with the adjoining apartments, provided lodging for the women of the palace.

The ornate tile work and stucco decoration is among the finest in the Alhambra. A dazzling honeycomb dome represents a remarkable work of Arab stalactitic vaulting, with thousands of intricate details.

The hall is called the "two sisters" because of the two large identical slabs of marble in the floor.

At the east end of the Court of Lions is the Sala de los Reyes or Sala de la Justicia (Hall of Justice). This hall is divided into seven sections with soaring stalactitic domes.

In its alcove-like recesses are wonderfully preserved 15th-century ceiling paintings. Most noteworthy are the three rare paintings on leather depicting scenes of court life and portraits of rulers.

One painting shows ten magnificently attired councillors, another is a hunting scene, and the third features the rescue of a maiden from the clutches of a wild man.

On the south side of the Court of Lions is the impressive Sala de los Abencerrajes. Legend says that the hall was named for the Abencerrajes knights, who were reputedly beheaded in this ornate room.

A mighty stalactitic ceiling dome is the most striking feature of this ornately adorned hall. Written on the dome's pedentives is the inscription: "There is no other help than the help that comes from God, the clement and merciful One."

In the center of the room, beneath the dome, is a twelve-sided marble fountain. Look carefully, and you might be able to see a rusty stain on the fountain, which is said to be blood from the Abencerrajes knights.

The Alcazaba is the original 13th-century Moorish fortress. This royal castle was built during the reign of Mohammed I. All that remains are the outer walls with their massive towers, but you will still enjoy exploring the ruins and walking around the ramparts to take in panoramic views.

From the vantage point of the old walls, you can see the Plaza Nueva, the Albaicín, and the Sierra Nevada mountains in the distance. The best views are from the 26-meter-high Torre de la Vela (tower) at the west end of the terrace.

The Puerta de la Alcazaba leads into the Jardín de los Adarves, a lovely shaded garden on the south side of the castle. The garden also offers sensational views of Granada.

A striking architectural contrast to the Islamic style of the other Alhambra palaces, the Palacio de Carlos V was built after the Christian Reconquest. This monumental palace, a massive structure 63 meters square and 17 meters high, was created for Emperor Charles V by Pedro Machuca.

Begun in 1526 but never completed, the palace was designed on a grandiose scale to rival the Moorish palaces and paid for by a special tax imposed on Moors who had remained in Granada after its Reconquest.

Even in its unfinished state, this palace is the finest example of High Renaissance architecture in Spain. The building has an extravagant facade and an impressive inner courtyard with a pillared two-story rotunda of Doric columns in the lower gallery and Ionic columns in the upper gallery.

The top floor of the palace houses the Museo de Bellas Artes de Granada (Fine Arts Museum), which has an excellent collection of European paintings from the 15th century to the 20th century. Most of the collection represents religious paintings that were created from the 16th century to 18th century at the monasteries of Granada.

On the ground floor (south side) of the palace is the Museum of the Alhambra, the best collection of Spanish-Moorish and Nasrid art in Spain. The museum presents the history and art of the (Nasrid dynasty) Caliphate, including Islamic-style plasterwork, marble columns, and ceramics. Not to be missed is the "Vase of the Gazelles," an exemplary piece of Spanish-Moorish ceramic art.

The Palacio del Generalife was the summer palace of the Moorish Kings, which was completed in 1319, during the reign of Ismail I. The Generalife Palace is most renowned for its gorgeous and meticulously landscaped gardens, and strolling the paths around the lush plantings is one of the most popular things to do at the Alhambra.

The beautifully landscaped Alhambra gardens extend up the hill, reminiscent of the gardens of an Italian Renaissance villa with terraces, grottoes, flowerbeds, and carefully trimmed hedges.

The most characteristic feature of the gardens is the use of water in water lanes and decorative fountains. The abundance of water was the Moors' symbol of richness, and the fountains are extravagant showpieces.

From the outer gate at the east end of the Alhambra complex, a cypress-lined avenue leads to the Patio de los Cipreses (Patio of the Cypresses). Shaded by ancient cypress trees, this large courtyard features a pond surrounded by myrtle hedges and another small pond with a fountain.

The most impressive area of Generalife Gardens is the Patio de la Acequia (Patio of the Irrigation Ditch), which is much more romantic than the English translation implies. The courtyard is enclosed by two pavilions and has a water channel dividing it lengthwise. The rest of the courtyard is planted with fragrant orange trees, cypresses, and roses.

Where to Stay near the Alhambra for Sightseeing

It's an enchanting experience to spend the night within the Alhambra complex in a quiet hotel room overlooking the tranquil gardens. However, there are only two hotels to choose from (the Parador de Granada and the Hotel America) within the Alhambra. Another desirable place to stay nearby is in the Albaicín district, the UNESCO-listed medieval Arabic quarter that has retained the atmospheric, narrow, winding streets and humble whitewashed houses of the old Moorish town.

Tips and Tours: How to Make the Most of Your Visit to the Alhambra

Exploring Spain: While you are in the Andalusia region, be sure to explore some of the Pueblos Blancos (White Villages) of Andalusia where whitewashed hilltop towns grace the rural landscape. For inspiration in planning your complete trip to Spain, see our article on the Top Attractions in Spain. 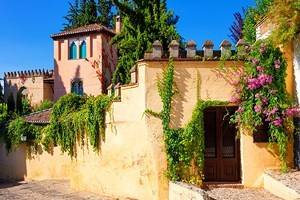 Where to Stay in Granada: Best Areas & Hotels 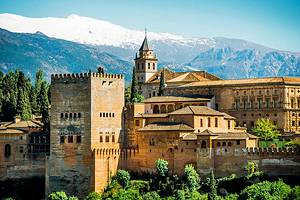 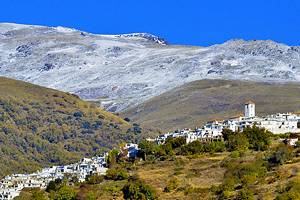 14 Top-Rated Attractions & Things to Do in Cádiz
Recent Articles