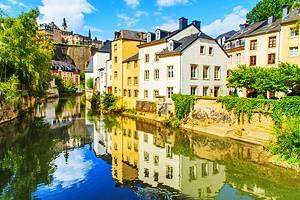 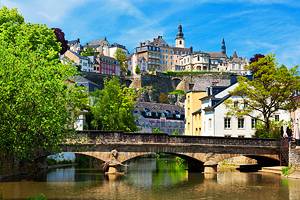 Despite its size - or, perhaps, because of its size - the Grand Duchy of Luxembourg is one of the most popular travel destinations in Europe. The focal point for most visitors is beautiful Luxembourg City, especially popular among those who like to take plenty of photographs while on vacation. Here, you'll find plenty of great places to pull out the camera (or, equally likely these days, your smart phone) and start clicking away, especially around the city's older quarter, which has been declared a UNESCO World Heritage Site.

Be sure to include the country's many picturesque smaller towns and villages in your Luxembourg travel itinerary, too. You'll be rewarded with plenty of photo-worthy scenes, including well-preserved old castles, cathedrals, and churches, and plenty of pleasing countryside to explore. For the best places to photograph in Luxembourg, refer often to our list below, and have fun!

Camera at the ready, head straight for Luxembourg City's Old Quarters for one of the most romantic cityscapes you'll see anywhere. As you can see from this image, there's no end of great angles from which to shoot, as well as subject matter: old walls and fortifications, lovely gardens and parks, charming cobbled streets, and great riverside trails can all be photographed here.

Built in 1903 to connect the upper and lower parts of the city - up to then separated by a river and deep gorge - Adolphe Bridge in Luxembourg City makes for an extremely pretty photo any time of year. You can also get a great shot of the bridge from the pretty park below Constitution Square.

As priceless as the paintings and artifacts contained within its walls, the building that houses the National Museum of History and Art is one of the most photographed in Luxembourg City. While part of the museum is in fact set in an old fortification consisting of three round towers (as seen in this photo), the newer section is equally appealing and is well worth photographing.

One of the most dramatic photos you'll take in Luxembourg City will be of the Bock Casements (Casemates du Bock), the ruins of the old fortifications that once protected the city. For the best results, choose a spot a little down river along the Alzette; the Casements will be on your right, framed perfectly by the river, a bridge, and the old city.

Built in 1582, the Grand-Ducal Palace in Luxembourg City is extremely easy to photograph thanks to its location overlooking a large square. For even more interesting shots, however, be sure to walk along some of the surrounding side streets. If you do, you'll be rewarded with glimpses of sections of this impressive palace framed by some of the older townhomes that line the streets leading to it.

Popular among tourists for its incredibly picturesque setting, the village of Wormeldange offers plenty of good vantage points for a picture. Much of the appeal is its location on the banks of the Moselle River; in fact, great views of the village can even be had from the comfort of a river cruise.

Situated on the banks of the River Our, the 9th-century Vianden Castle is one of the most picturesque spots in the Ardennes. The fortified outer wall in fact encompasses the whole village, which celebrates its rich past with a traditional medieval festival each summer.

The lovely Schiessentumpel Waterfall near Mullerthal is something of a hidden gem that top photographers certainly seem to know about. Here, the Black Ernz river cascades across the falls directly beneath an old bridge in what is undoubtedly one of the most romantic locations in the country for couples to snap a selfie.

The exquisite 7th-century Benedictine Abbey in Echternach is a must-include on your Luxembourg travel itinerary. Highlights to photograph include the abbey's large courtyard and the old church. If you've got the equipment for it, try to capture a night shot when the abbey is lit up to great effect.

The views from the battlements of Bourscheid Castle are simply breathtaking. Although a bit of a climb, be sure to have your camera at the ready to capture the vistas over the gorgeous Luxembourg Ardennes.

Located in an area of considerable outstanding natural beauty, the remarkably well-preserved medieval village of Esch-sur-Sûre will provide plenty of great photo ops. Some of the best views can be had from the river Sûre, framing both the village and the spectacular old castle against the surrounding hills.

Another medieval town worth visiting is Larochette. Complete with narrow cobbled streets, the town possesses ruins of not one, but two old castles that are well worth photographing. Also photogenic is the town's church; it overlooks the central square, and is especially pleasing to look at from some of the trails that surround the town.

Another area of outstanding natural beauty that's well worth adding to your scrapbook is Berdorf. Here, you'll find everything from spectacular valley- and river views to a fascinating network of caves and rock formations, such as the Hohllay Cave, shown here. Much of the area is easily accessible thanks to well-marked trails.

11 Top-Rated Attractions & Things to Do in Grand Junction, CO

12 Top-Rated Attractions & Things to Do in Vail, CO
BE INSPIRED