Just because Minneapolis is a major urban center in the United States does not mean it's void of green space. In fact, the parks are among the highlights of Minneapolis. The city has 180 parks, including 55 miles of parkway, 102 miles of biking and walking paths, 22 lakes, 12 gardens, golf courses, and recreation centers. In fact, it's fair to say that Minneapolis is one of the greener cities in America.

From Minnehaha Park, one of the state's oldest, with its magnificent waterfall, to the expansive Lake Harriet and the magnificent sculptures of the Minneapolis Sculpture Garden, you can easily fill an entire trip by simply exploring the best parks in Minneapolis alone. More than green space, these city parks also become community gathering spaces for performances, public art, picnics, exercise, and much more.

One of the oldest parks in the state of Minnesota, Minnehaha Park is absolutely one of its most beloved. The park was purchased by the city of Minneapolis in 1889 and was officially designated as a park in 1906.

The beauty of the park is that it sits right in the heart of Minneapolis, but one step inside, and it feels like you've left the concrete far behind. The highlight of the park is the Minnehaha Falls, which appears as if it was placed from a mountainside right into the belly of the city. Author Henry Wadsworth Longfellow wrote The Song of Hiawatha poem that features the falls prominently and helped to spread its legacy. Though, interestingly enough, Longfellow never actually visited the falls himself.

The park is also home to several historic sites that help tell the story of Minneapolis, such as the Minnehaha Princess Station, a Victorian rail depot that was built at the end of the 19th century.

The park reached National Register of Historic Places status in the 1960s. More than 850,000 people visit each year, and it is one of the most popular sites in the entire state.

On the northeastern shores of the massive Lake Harriet sits Lyndale Park, one of the best parks in Minneapolis in one of the most upscale neighborhoods. Spread across 61 acres, Lyndale Park has four different gardens, each with its own vibe: the Peace Garden, the Rose Garden, the Perennial Garden, and the Perennial Trial Garden. Lyndale also has the Thomas Sadler Roberts Bird Sanctuary.

Lyndal Park is actually one portion of a sprawling park area across the city, known as the Grand Rounds Scenic Byway. The Rose Gardens are actually the second oldest public rose gardens in the United States. Within the one-acre garden, up to 60,000 different roses bloom.

The very best time to visit the park is in April and May, when flowers begin to bloom and the migratory birds are making their way through the park.

In addition to walking paths and gorgeous displays of annual and perennial flowers, the park also features stunning fountains and plenty of pieces of public art.

When it comes to the king of parks in Minneapolis, it's hard to top Theodore Wirth Regional Park. This park is the largest park managed by the city and spans 843 acres. It gets its name from Theodore Wirth, who was the superintendent of Minneapolis parks for three decades in the early 20th century.

Today the park is a year-round destination, with a fishing pier, two golf courses, miles of biking and hiking trails, and hills for snow tubing in the winter. One of the main highlights of the park is the Quaking Bog, which visitors can explore across a series of floating boardwalks.

The bog spans five acres, and the short boardwalk hike gives way to mossy, swamp-like views, all within the Theodore Wirth Park woods. The main park also houses the Eloise Butler Wildlife Garden and Bird Sanctuary, which is teeming with plant species and wildlife that are endemic to the region.

An oasis of green right in the heart of the Mill District, Gold Medal Park provides 7.5 acres of open space and relaxing energy for the bustling urban neighborhood.

The park sits on what was once the gathering place for Minnesotans when the I035W bridge collapse occurred in 2007. Today the park offers a place for locals to come escape the urban fray along its walking trails, which offer views of the historic neighborhood, as well as the Mississippi River.

The center of the park has a 32-foot mound, which can be climbed via a gently spiraling staircase. At the top of the mound are the best views of the city, from which you can see the Guthrie Theater and the Stone Arch Bridge.

The park features several modern art installations, and during the evening, its benches are lit with blue LED lights, casting an ethereal glow over the entire space.

One of the most distinctive features of Minneapolis' southwestern ice is Lake Harriet. The impressive lake sets the scene for much of the city's outdoor activity, from sailing and fishing to live music and outdoor movies in the park.

From the banks of the lake, visitors have sweeping views of Minneapolis. A three-mile paved trail circles the lake and bandshell, and is popular among runners and cyclists. An on-site restaurant, The Bread & Pickle, is a popular lunch spot, too.

What's great about Lake Harriet is that come the warmer months, two stretches of beach open up for swimming. North Beach has lifeguards daily from June to August. The Southeast Beach has no lifeguard but is also open for swimming.

Don't forget to look for the Elf House in the park, which is carved into an old ash tree. Legend has it that any letters left for the elf will be replied to by morning.

Basically right in the center of the city, Loring Park is one of the largest and best parks in Minneapolis. At the center of the 34-acre park is Loring Lake, which is surrounded by many paths for walking and biking.

But it's also a community center, with a playground, public art, and a pier for fishing. The park was built in 1883 and, at first, went under the name Central Park. But it was renamed at the end of the 20th century for Charles Morgridge Loring, who was the first president of the park board in Minneapolis.

Loring Part is the event epicenter for Minneapolis, as some of its largest festivals are held here, from Twin Cities Gay Pride to Rock the Garden, the Loring Park Art Fair, and Holidazzle. It also happens to sit across the street from the Walker Art Museum, so it often becomes the gathering place for local art lovers from the community.

Though an island no more, Boom Island Park was named for the island on which it originally sat. The island itself was named for the booms that were used to separate the logs that rolled down the Mississippi River to surrounding sawmills. A buildup of silt and sawdust is what caused the island to become part of the mainland, and a park was developed in the 1980s.

Today Boom Island Park is known for its marina, boat dock, mini lighthouse, picnic shelters, and a playground. It also has pretty spectacular views of downtown Minneapolis, and a series of walking and biking paths from which to drink in the views.

You can also begin or end a trip down the local Heritage Trail, which is found not far from the park. The Heritage Trail goes around Main Street and St. Anthony Falls, or, in the opposite direction, connects with the Mississippi River Regional Corridor Trail that goes on to other parks like Anoka Riverfront Regional Park, Islands of Peace Park, and East and West Coon Rapids Regional Parks.

Minneapolis' Brownie Lake is the northernmost lake in the city's Chain of Lakes - a collection of lakes that includes Cedar Lake, Lake of the Isles, Bde Maka Ska, and Lake Harriet. The park itself sits on the western shores of the Cedar Lake Parkway and is a remote enough location that offers tranquility and escape, while still being within the city limits.

Brownie Lake Park is a hidden jewel for the outdoor enthusiasts in the area, with plenty of space and trails dedicated to bikers and hikers. The lake does not permit motorized vehicles, but it is a big destination for canoeing and kayaking.

Mountain bikers flock to Brownie Lake Park to make the most out of the Brownie Lake Trail, a difficult trail ride that features 15 percent grades and 26 rock sections. It's a challenging and somewhat perilous trail, so be certain of your skill level before attempting it.

Before it was Bryant Square Park, it was called 8th Ward Park. In 1907, it was officially renamed for its location on Bryant Avenue. Today it is a center of family recreation, and one of the best parks in Minneapolis for families, filled with activities like a wading pool, soccer field, softball field, playground, and even an ice rink and library.

In 2008, the park erected the Bryant Square Park POPS (Public Outdoor Performance Space), which sits into the hillside and features a 20-foot circular plaza that becomes a stage for a host of live performances during the summer, as well as movie nights, dance, comedy, and more.

By 2012, the park had installed two sports fields, and a few years later the new rec center was built, with five new mosaic panels that show off different themes, like the seasons, water, and a butterfly garden.

One of the larger parks in Minneapolis, the Mississippi Riverfront Regional Park spans 139 acres along the Mississippi River. Within the park, you'll find a network of paved trails that connect with the Coon Rapids Dam Regional Park, as well as the Minneapolis Park System trails, meaning you could spend days and days within the park and never have the same itinerary.

Among the activities the park affords are fishing, birding, bicycling, and hiking. Visitors can also stop by the Riedel Farm Estate historical site, which is located within the park. The farm site was built in the 1880s and takes visitors back in time to when Minneapolis was fueled by agriculture.

The Minneapolis Sculpture Garden is a free park in Minneapolis that offers so much more than a green haven amid the concrete. The 11-acre park is actually one of the largest city sculpture gardens in the country with more than 40 works of art.

One of the pieces of art in this park is part of Minnesota legend: the Spoonbridge and Cherry. The giant spoon and cherry went up in 1985 and has become the centerpiece of the sculpture garden. The spoon weighs 5,800 pounds, while the cherry weighs another 1,200.

It is one of the most photographed icons in the city, and is reason enough to make a trip to this particular Minneapolis park. 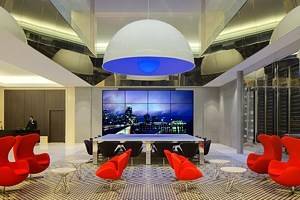 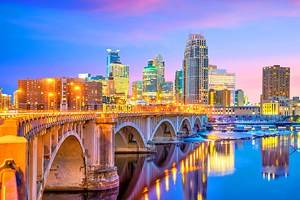 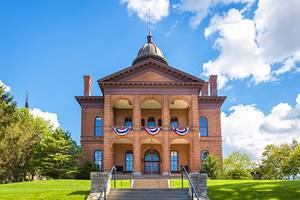 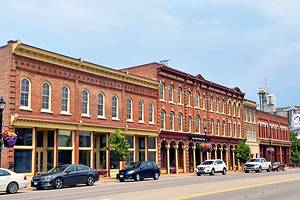 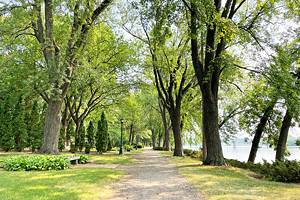 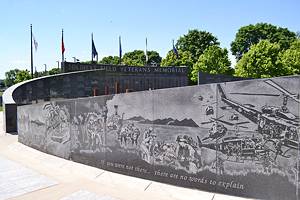 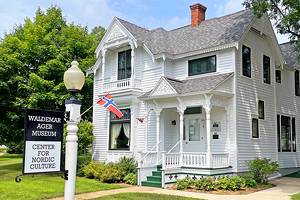 10 Top-Rated Things to Do in Eau Claire, WI 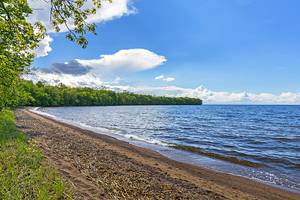 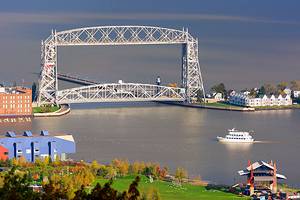 14 Top-Rated Attractions & Things to Do in Duluth, MN 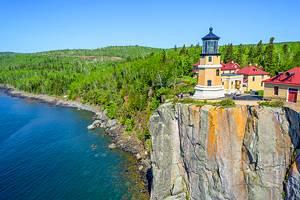 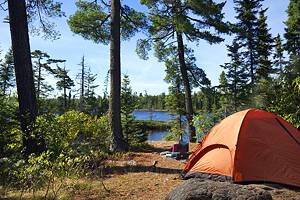 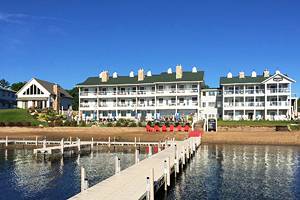 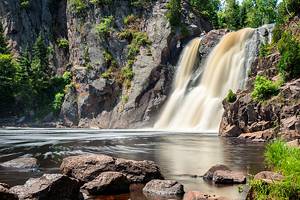 22 Most Beautiful Islands in the World
BE INSPIRED!
More Pictures of Minnesota