In the vast breadth of the history of Ancient Egypt, Edfu's Temple of Horus is quite a newbie.

Construction began here in the 2nd century BC, when Egypt was ruled by the pharaohs of the Ptolemy Dynasty.

The building's relative youth means it is one of Egypt's best preserved temples and makes it one of Upper Egypt's major Nileside tourist attractions.

Edfu's temple is one of the most impressive feats of construction completed during the Ptolemaic era and is one of the best places to visit to experience the audacious ambition of Egypt's temple builders.

The temple's looming sandstone walls are covered in giant hieroglyphics and dazzling friezes that ape the patriotic decorations of earlier pharaohs.

Within its vast chambers, strolling under colossal gateways and wandering ant-like through its hallways that seem to be have been created for giants, you really get a feel for the all-encompassing power of Egypt's rulers.

Edfu sits 109 kilometers south of Luxor and 130 kilometers north of Aswan, so it's a typical stop on a journey between these two major centers of Upper Egypt.

Stone sentinels of the falcon-headed god Horus watch over the Great Pylon, while stone reliefs on either side of the gate sing the praises of Ptolemy Pharaoh Neos Dionysos.

Don't Miss: the relief of Neos Dionysos (Ptolemy XII) holding his enemies by the hair, ready to smite them in front of Horus - a fittingly bloody show of pharaonic strength intended to awe his Egyptian subjects as they entered.

Surrounded on three sides by 32 towering columns, the huge Forecourt would originally have had a great altar in the center, where the temple priests made offerings to Edfu's gods surrounded by the town people.

The columns are richly decorated with floral and palm capitals, and the golden-hued stone walls are covered in reliefs of the gods Horus and Hathor.

Just to the left of the entrance into the Vestibule, the surviving black granite statue of Horus, which would have originally been part of a pair, wears the double crown of Egypt and guards the door into the farther reaches of the temple.

Don't Miss: The rear walls of the colonnade are covered with three rows of large reliefs depicting the Pharaoh (Ptolemy IX Soter II or Ptolemy X Alexander I) holding converse with the gods or with the victorious god Horus.

Similar representations are repeated all over the temple.

Having passed through the grandiose Forecourt, you come to the much more human-scale Vestibule decorated with 12 columns topped with elaborate floral capitals.

Just as you enter are two small rooms.

The western room is the Hall of Consecration, with a beautiful relief on its rear wall depicting gods Horus and Thoth pouring sacred water over the pharaoh.

The eastern room was the temple's library, with a list of books it once contained still inscribed on the wall along with a depiction of Seshat the goddess of writing.

Don't Miss: On the walls are four rows of incised reliefs showing Pharaoh Euergetes making offerings to the gods or performing ritual acts (e.g. laying the foundation stone of the temple, in the bottom row on the left-hand wall).

Above are a band of astronomical representations and an ornamental frieze consisting of the names of the pharaoh guarded by two falcons. Below, just above the floor, are Euergetes, his wife Cleopatra, and a long file of local gods bringing offerings to the three principal divinities of Edfu.

On the architrave of the door leading into the Hypostyle Hall is an interesting relief of the solar barque, guided by two falcon-headed Horus figures, with the sun worshiped by Thoth and Neith.

At the sides, in the attitude of prayer, are Ptolemy IV Philopator (left) and the Four Senses; to the right, sight and hearing, to the left, taste (symbolized by the tongue) and reason.

A doorway leads into the Hypostyle Hall, with its roof supported by 12 columns and book-ended by two small chambers, which access the inner passage around the temple.

The left-hand chamber functioned as the temple's laboratory, where incense and perfumes were mixed by the priests in preparation for rituals.

First and Second Antechambers: Inner Altars of the Priests

Beyond the Hypostyle Hall, the First Antechamber was an altar area where offerings were left for the gods by the temple priests. A staircase here leads to the roof, which is unfortunately not able to be accessed by visitors.

Don't Miss: the mural reliefs upon the walls here depict the procession of priests, headed by the pharaoh, ascending (east side) and descending (west side).

The First Antechamber leads onto the Second Antechamber with a small court of offerings. This room would be the priests' last port of call to make offerings to the gods before entering the holy of holies itself in the Sanctuary.

Don't Miss: On the ceiling, a mural depicts the sky goddess Nut, with the various figures of the sun in boats beneath her.

Sanctuary: The Room of the Gods

Lit by three small square apertures in the roof, the sanctuary was where the golden statue of Horus once stood upon a granite shrine (still in situ today), which is a relic of the pre-Ptolemaic temple.

A corridor runs around the sanctuary leading off into several dark chambers, which are decorated with well-preserved and colorful reliefs.

In the northern chamber is a replica of the wooden barque (the original can be seen at the Louvre in Paris), which would have held the golden statue of Hathor on festivals and during processions.

Don't Miss: The most interesting reliefs in the sanctuary are those in the bottom row on the right-hand wall.

In this series of reliefs, Philopator is depicted opening the door of the sanctuary dedicated to Horus; standing before the god in a reverential attitude with his arms hanging by his sides; offering incense to his deified parents, Euergetes I and Berenice; and offering incense before the sacred barque of Hathor.

The Inner Passageway runs around the back half of the temple, entered from the Hypostyle Hall, and is decorated with reliefs and inscriptions. These are well worth spending some time examining.

Don't Miss: The interesting reliefs on the west wall depict the battles between Horus and the god of the underworld, Seth.

In the frieze of scenes, Seth is depicted as a hippopotamus that the pharaoh and Horus are hunting.

In the first scene (below, right) the pharaoh tries to spear a hippopotamus, which turns aside; Horus does the same, holding a chain in his left hand and a spear in his right, with his mother Isis beside him and a small Horus at the helm of the boat, to the rear.

In the second scene, the pharaoh stands on land on the left, with two ships in front of him, in which are Horus and an attendant; Horus holds the hippopotamus with a chain and plunges his spear into its head.

In the fifth scene, the hippopotamus lies on its back with its hind legs chained.

Nilometers were used by the ancient Egyptians to measure the height of the river and help predict the future season's harvest.

Edfu temple's Nilometer is found by taking a subterranean staircase leading from the eastern side of the Inner Passageway.

Although no longer connected with the Nile today, you can still see the shaft with the depths inscribed in demotic characters.

Temple of Horus History: A Temple Raised by Successions of Ptolemaic Pharaohs

Edfu was the ancient Egyptian Tbot, or in Coptic Atbo, from which the modern name is derived.

When the Greeks arrived on the scene, they named it Apollinopolis Magna and made it the capital of the second nome (area) of Upper Egypt.

According to myth, the falcon-headed god Horus fought one of his great combats with the god of the underworld Seth here, which is probably why Horus was particularly revered in this area.

In the Ptolemaic era, the old god of Horus was twinned with the Greek god Apollo to become Horus-Apollo.

Built on the site of an earlier temple, Edfu's temple was dedicated to Horus; Hathor of Dendera; and their son, the youthful Harsomtus, "Uniter of the Two Lands."

The history of its construction and a description of the whole structure are set forth in long inscriptions on the outside of the enclosure wall, particularly at the north end of the east and west sides.

The rear part of the complex, the temple proper, was begun in 237 BC, in the reign of Ptolemy II Euergetes I, and completed in 212 BC under his successor, Philopator.

The decoration of the walls with reliefs and inscriptions, interrupted during the troubled reign of Epiphanes, was resumed by 176 BC by Philometor and finished in 147 BC during the reign of Euergetes II, exactly 90 years after the laying of the foundation stone.

Euergetes II also added the large vestibule (completed in 122 BC) and decorated it with reliefs.

During the reigns of Ptolemy IX Soter II and Ptolemy X Alexander I, the forecourt with its colonnades, the enclosure walls, and the pylon were built, but the pylon was decorated with reliefs only in the reign of Ptolemy XII Neos Dionysos, who finally completed building works in 57 BC.

Around the Temple of Horus

The Mammisi: The Birth House

To the west of the Temple of Horus' entrance is the Mammisi, built by Ptolemy VIII Euergetes II and decorated with reliefs by Ptolemy IX Soter II.

In the main chamber, on the right-hand wall, are various reliefs of Hathor of Dendera, including Hathor suckling Horus, Hathor giving birth, and several Hathors playing musical instruments.

Remnants of the Ancient City

Farther to the west of the temple, high mounds of rubble mark the site of the ancient city. A number of archaeological excavations here have recovered the Greco-Roman buildings sitting under the houses of the Byzantine and Arab empire periods.

The modern township of Edfu is a major market town for the area and has a sugar industry and an old established pottery industry.

It's a bustling place, with a couple of budget hotels, restaurants dishing up typical Egyptian cooking, and a small tourist souq near the temple entrance.

There's nothing of particular note to see in town except for the temple, which is why most travelers just come on a day trip here or stop off on their way between Luxor and Aswan.

Tips and Tactics: How to Make the Most of Your Visit to Edfu's Temple of Horus

Getting to Edfu's Temple of Horus

Upper Nile Sights: If you want to concentrate your Egypt travels on this section of the Nile, which brims with history, check out our articles on things to see and do in the cities of Aswan, and Luxor, and the sites of Philae, Abu Simbel, and Kom Ombo.

18 Top-Rated Attractions & Things to Do in Aswan 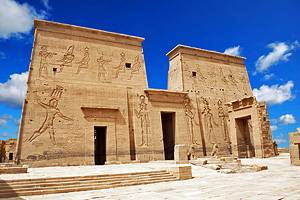 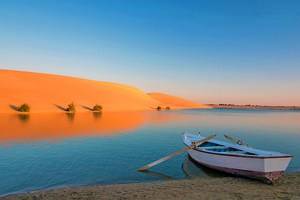 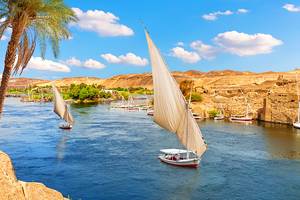 14 Best Things to Do in Egypt
Recent Articles

22 Most Beautiful Islands in the World
BE INSPIRED!
More Pictures of Egypt