16 Top-Rated Attractions & Things to Do in Alexandria

Egypt's ancient center for the cult of Isis, the Temples of Philae were venerated from the Pharaonic era through the Greek, Roman, and Byzantine periods with each ruler making their own additions to the stones here.

This sacred site has dazzled travelers since the first Nile cruises set off from Cairo, and is one of Nubia's most important monument sites.

Saved from a watery grave by UNESCO's rescue project during the building of the Aswan High Dam, the temples were transferred block by block from their original place on Philae Island to Agilika Island, 12 kilometers south of Aswan.

Thanks to this, today travelers can still walk amid the columns of this ancient venerated site.

This is one of the most popular tourist attractions in the Aswan area. To help you make sense of the site, use our visitor's guide to exploring the Philae Temple Complex.

The First Pylon leads into the main temple area. Its two towers and central doorway provide a grand 18-meter-high entry that is decorated with reliefs by Nectanebo.

A doorway in the western tower with reliefs by Philometor, leads directly to the Birth House.

In front of the pylon there originally stood two granite obelisks erected by Euergetes II and two granite lions.

Adjoining the east tower, an elegant gateway has reliefs by Ptolemy II Philadelphus (on the lintel) and the Emperor Tiberius (on the jambs). The gateway, built by Philadelphus, originally stood in a brick wall.

Don't Miss: Many visitors pass through this area quickly in their rush to head into the temple's inner areas, but it's worthwhile hanging back to admire some of the pylon's intricate details.

On the front of the east tower, a huge relief depicts Ptolemy XII Neos Dionysos grasping a band of enemies by the hair and raising his club to smite them, with Isis, the falcon-headed Horus of Edfu, and Hathor on the left.

Above are two reliefs of Neos Dionysos presenting the crowns of Upper and Lower Egypt to Horus and Nephthys (right) and offering incense to Isis and Harpocrates (left).

As you pass through the central doorway, look for the French inscription ("an 7 de la République") on the right, commemorating Napoleon's campaign and the pursuit of the Mamelukes by General Desaix in 1799.

On either side of the Forecourt, you'll see structures fronted by colonnades. The small building to the east contained rooms for the priests, which served some scientific purpose. Look for the plant columns in its vestibule, which are notable for their elegant proportions. On the north side of the building's vestibule, a door accesses the inner passage around the temple.

The building on the western side of the Forecourt is the Birth House (mammisi), dedicated to Hathor-Isis in honor of the birth of her son Horus.

It is surrounded on all four sides by colonnades, the columns in which have foliage capitals surmounted by sistrum capitals. The walls, columns, and screens between the columns are covered with reliefs and inscriptions, mostly by Euergetes II, Neos Dionysos, Augustus, and Tiberius.

Don't Miss: In the Birth House check out the particularly interesting reliefs in the last chamber, which depict scenes from the childhood of Horus, including Horus as a falcon in the swamps of the Delta and Isis suckling Horus in the swamps.

The Second Pylon provides a fittingly regal entry to the inner sanctum of the temple, with a magnificent doorway 32 meters wide and 12 meters high.

Don't Miss: On the lower part of the doorway is a relief of a large figure of Neos Dionysos dedicating the slaughtered sacrificial animals to Horus and Hathor.

Above are two small reliefs. On the right, the king is depicted presenting a garland to Horus and Nephthys and on the left, offering incense to Osiris, Isis, and Horus while pouring water on the altar.

The eight-columned Vestibule is the first room of the inner temple area and was originally separated from the court by screens between the columns on the front.

Look for the Coptic crosses and Greek inscription incised into the walls that show how the temple was transformed into a Christian place of worship during the early Byzantine age under the Coptic Bishop Theodore.

Also, look above the door for the inscription commemorating the archaeological expedition sent to Philae in 1841 by Pope Gregory XVI.

Don't Miss: Although the Vestibule's reliefs were left unfinished and are now ruinous, they are still highly interesting.

Over the door in the south wall, the top relief shows Horus seated on a bench with Nephthys and Isis presenting the crowns of Lower and Upper Egypt. Thoth (left) and Seshat, the goddess of writing (right), inscribe the king's name on a palm branch, while behind Thoth is the air god Shu, holding a sail.

The below reliefs depict the tomb of Osiris at Abaton, with the body of Osiris borne by a crocodile.

To the left of the door are unfinished reliefs showing the king making grants of land, while above are three lines in Meroitic cursive script.

On the right-hand wall (second top row) is a famous relief depicting the source of the Nile: the god of the Nile, with a snake entwined around his body, pours water from two jars under a rocky crag on which are perched a vulture and a falcon. To the right of this is the soul of Osiris in the form of a bird within the sacred grove, worshiped by Hathor (left) and by Isis, Nephthys, Horus, and Amun (right).

The Sanctuary: House of Isis

After passing through a number of antechambers flanked by dark side chambers, you come to the Sanctuary, lit by two small windows.

The granite base here (presented by Euergetes I and his wife Berenice) would have held the sacred barque bearing the image of Isis.

To the left of the first antechamber is a small room with reliefs of the king in the presence of Isis. On the west side of this room is a door leading out of the temple to arrive at the Gateway of Hadrian.

Sitting within the old enclosure wall of the temple, northwest of the Second Pylon, the small Gateway of Hadrian was built in the reign of the Emperor Hadrian and decorated with reliefs by Hadrian, Marcus Aurelius, and Lucius Verus.

The gateway presumably led to the Sanctuary of Abaton on the neighboring island of Bigga, where there was a Tomb of Osiris, and accordingly, the reliefs relate to the cult of Osiris.

Don't Miss: On the lintel, Hadrian is depicted making offerings to Osiris, Isis, and Harsiesis and to Osiris, Nephthys, and Harendotes.

On the left hand jamb is the sacred relic of Abydos, on the right hand jamb, the djed pillar of Osiris (the sacred emblem of Busiris).

Within the gateway, on the right, Marcus Aurelius is depicted in the presence of Osiris and Isis, while below, Marcus Aurelius makes offerings of food, including grapes, and flowers to Isis.

History of Philae: A Place of Pilgrimage through the Centuries

The ancient Egyptian name of Philae was Pilak, from which the Greek and Latin Philae was derived.

During the Islamic era, it was known to the local people as El-Oasr, the "Castle," or as Geziret Anas el-Wogud, after the hero of one of the tales in the "Arabian Nights," who traced his beloved to the island, where she had been locked up by her father.

The oldest surviving temple buildings here date from the time of Nectanebo I (circa 370 BC) and the principal deity worshiped was Isis, although Osiris, Nephthys, Hathor, and the cataract gods Khnum and Satet were also venerated.

The imposing buildings that stand today were erected by the Ptolemies in the last two centuries BC and by the Roman Emperors in the first three centuries AD.

Many inscriptions show that pilgrims flocked to Philae in Greek and Roman times to pay homage to the mysterious and benign Isis, goddess of healing.

Long after the introduction of Christianity, the Nubians remained faithful to the cult of Isis, and it was only in the time of Justinian (AD 527-565) that the temples were closed and some of their chambers converted for use in Christian worship. From then until the coming of Islam, a Coptic town flourished on the island.

Until the construction of the first Aswan Dam the island ranked as one of the most beautiful places in Egypt and attracted large numbers of visitors every year.

Thereafter it was under water for the greater part of the year and the temples were accessible only between August and December.

The construction of Egypt's High Dam project threatened to engulf them for good, but they were saved from this fate by the great international rescue operation sponsored by UNESCO and carried out between 1972 and 1980.

The island of Philae was surrounded by a cofferdam, and the area within this was drained; then a new site was prepared on the neighboring island of Agilika, the temples were broken up into sections, which were carefully numbered, and they were then re-erected in the same relative positions on Agilika.

As you're walking around the temple, note the gray coloring of the lower part of the walls and columns. This is the effect of their annual immersion over the time period between the two dams.

Despite those years of annual immersion and then being moved stone-by-stone to an entirely new site, the imposing and magnificently preserved temples of Philae still retain their power to impress.

Around the Temple of Isis

The Temple of Hathor

Just 50 meters east of the Temple of Isis is the little Temple of Hathor, built by Philometor and Euergetes II in honor of Hathor-Aphrodite.

The vestibule and the sanctuary (destroyed) of the temple were added by Augustus.

The best preserved part of the structure is the main temple chamber, on the front of which are two plant columns linked to the walls by screens.

Don't Miss: The columns of the Vestibule are decorated with charming reliefs of flute-players and harpists, Bes with a tambourine, Bes dancing and playing a harp, monkeys playing the lyre, and priests bearing an antelope.

Southeast of the Temple of Hathor, on the bank of the river, is the charmingly dinky Kiosk of Trajan, which during Egypt's age of Victorian explorers was a favorite subject of famous English artists. It dates from the Roman Imperial period and was left unfinished.

The northern end of the Philae complex holds various Roman and Byzantine remains including two Coptic churches, the remnants of a monastery, and the ruins of the Temple of Augustus.

Tips and Tours: How to Make the Most of Your Visit to the Philae Temple Complex

Getting to the Philae Temple Complex

Around Aswan: From felucca rides around the ruins on Elephantine Island to visiting Egypt's famed unfinished obelisk, Aswan has plenty more to offer visitors. For more temples, both Abu Simbel and Edfu's Temple of Horus are within day-tripping distance. 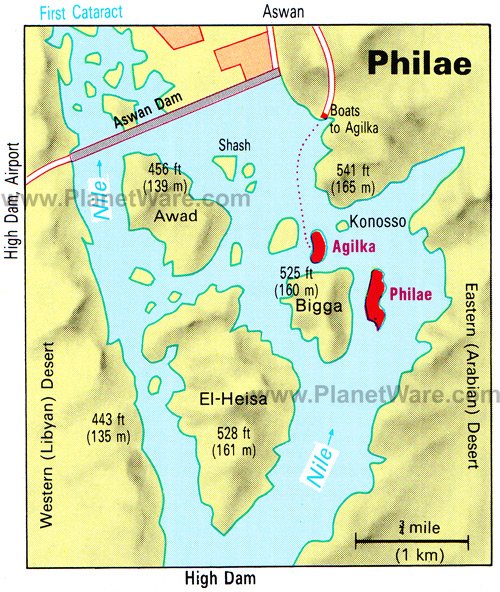 16 Top-Rated Attractions & Things to Do in Aswan