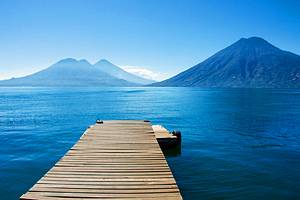 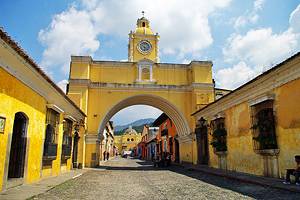 With cultural, natural, and urban attractions a plenty, plus colorful cities and textiles, Guatemala is a picture-perfect place to snap some epic photographs. This Central American gem is home to cities, like Antigua, that are ringed by volcanos and feature cobbled streets and neoclassical architecture. It is also home to jungles and cloud forests, beautiful lakes, and wild stretches of coastline. Here are some of the best places to photograph in Guatemala.

The Mayan ruins protected within Tikal National Park, in the northern Guatemalan jungle near Belize, are one of Central America's most important archeological sites. Pictured here is the Grand Plaza with the North Acropolis and the Great Jaguar Temple. The city of Tikal was one of the most important Mayan urban centers and was occupied for more than one thousand years.

Photogenic Antigua is one of Central America's most beautiful cities. With colorful buildings, cobblestone streets, and the yellow Santa Catalina arch framing Aqua Volcano, the above photo's set-up is one of Antigua's classic spots to snap a picture. Head out at sunrise to (often) have the street to yourself and capture even more brilliant colors.

Lake Atitlan, in the southwestern highlands, about two hours from Guatemala City, is one of the world's most beautiful lakes. It is essentially a massive volcanic crater surrounded by lush green hills and more volcanoes with dramatic pointed cones, including San Pedro, which is pictured here. It is well worth the effort to visit this magical natural attraction. Spend the night in Panajachel, which is a busy, small town known for its colorful textiles and as a lake getaway.

The active Volcano Fuego can be seen from the capital, Guatemala City, located about 43 kilometers southwest. Fuego frequently erupts, spewing ash and lava as depicted in the above photograph. Known as a stratovolcano, Fuego has a steep, conical shape that is quite dramatic looking.

Visit the remote town of Chichicastenango on Thursdays and Sundays, when this sleepy village comes alive with one of Guatemala's largest markets. The market very much caters to locals with everyday goods, fruits and veggies, and bright-colored textiles. From handwoven skirts and loose fitting tunics to bags and blankets, the fabric creations in Guatemala are known around the world.

Surrounded by volcanos - Fuego volcano is pictured here - in a high-altitude location, Guatemala City is Central America's most populous city, home to more than three million people. The city is split into multiple zones, but tourists will mostly visit Zone 1, where you'll find the central district and most of the historic buildings. And Zone 4, where there are trendy coffee shops, colorful street art, and restaurants.

Semuc Champey is one of Guatemala's most stunning natural attractions. As seen in this photograph, it features a series of stepped, bright turquoise pools surrounded by jungle. The pools, which travelers can swim in, sit atop a natural limestone bridge under which the Cahabon River passes.

The restored Municipal Theater pictured here is one of a number of neoclassical buildings the city of Quetzaltenango in Guatemala's western highlands is known for. Other architectural must-sees include the House of Culture and Espiritu Santo Cathedral, which has a Baroque colonial exterior and a modern interior.

In Santa Rosa on Guatemala's Pacific Coast, Monterrico Beach is a black-sand beach that is one of Guatemala's best. It has a laid-back vibe, big waves, and inexpensive places to stay and eat. It is also a sea turtle nesting ground.

Antigua's central plaza, pictured above, is the main gathering place in this small city ringed by volcanos. The Spanish colonial buildings here include the Baroque La Merced Church, which plays a role in the city's famed Easter holy week Semana Santa celebrations.

One of the volcanos just outside of Antigua, which is visible from the city center, is Aqua Volcano, featured in the above photograph. A conical-shaped volcano known as a stratovolcano, unlike Guatemala's Fuego volcano, Agua volcano has not been active for some 10,000 years.

In the heart of Guatemala City, right on the Plaza Mayor, is the National Palace of Culture, pictured here. The most ornate building in the city, it is also one of the most photographed sites in the capital city. Once the home of a dictator General Jorge Ubico, today it has been converted into a museum.

The Antigua Guatemala Market in the ancient city of Antigua is one of the best in the country. Not only does it sell fresh produce, like the fruit pictured here, but it is also filled with vendors hawking colorful Mayan fabrics, carved wooden handicrafts, and other unique pieces of art. Pick up a handwoven bag or tunic as a gift to yourself or a friend.