Nazareth (in Hebrew, Nazerat; in Arabic, En-Nasra) is the largest Arab town in Israel, with a mixed population of Christian and Muslim Arabs.

This city of churches is a major tourist attraction and place of pilgrimage for the world's Christians, who believe it to be the site of the Annunciation – when the Archangel Gabriel announced the birth of Jesus to the Virgin Mary.

It's also thought to be where Jesus spent his adolescence, and in the nearby village of Cana, he's believed to have performed the first of his miracles.

Top of most tourists' things to do agenda when in town is to visit the Church of the Annunciation. After you've filled up on church sightseeing, be sure to make time for strolling Nazareth's market district.

Check out the best places to visit on your trip with our list of the top tourist attractions and things to do in Nazareth.

1. Church of the Annunciation

Regarded as one of the most important churches of modern times in Israel and top of the things to do list in Nazareth, the present Church of the Annunciation was built in 1969. However, archaeological evidence shows that a church has sat on this site since at least the 3rd century AD.

During the 4th century, the Empress Helena (mother to Constantine the Great, who ruled over the Byzantine world from his capital in modern-day Istanbul) had a second church constructed here, which was destroyed by the Persians in AD 614.

The Crusaders later built a three-aisled basilica. It was again razed, this time by Sultan Baibars.

The site then lay empty until 1730 when the Franciscans gained permission to build a new church, which was pulled down in the 1950s to make way for the church you see today, designed by Italian architect Giovanni Muzio.

Constructed to depict the history of all the churches that have stood here, the plan of today's Church of the Annunciation is based on the Crusader church, while the side walls are built on top of the surviving fragments of older walls, with the east-end apses of the Crusader church incorporated into the design.

In the floor of the church is a large octagonal opening with a view of the lower level and the older structures below – the Grotto of the Annunciation and the remains of the earliest churches on the site. Over this area, which can also be seen from the upper church, is the dome.

To complement your church visits with some understanding of Nazareth's importance in Christian beliefs, don't miss the Mary of Nazareth International Center, opposite the Church of the Annunciation.

Run by the Chemin Neuf Catholic community, the center offers a Biblical multimedia show and a series of film exhibits that explain Mary's life and her representation both in the Bible and Qur'an, as well as the story of early Christianity and the Eastern Church.

There's also a small archaeological excavation on-site showing the foundations of a house that dates from the 1st century AD and a large beautifully landscaped garden with a pleasant restaurant offering excellent views across Nazareth.

Next door to the Church of the Annunciation, within the same compound, is St. Joseph's Church, built in 1914.

The site it stands on is traditionally held by believers to be where Joseph once had his carpentry workshop.

St. Joseph's is quite small and plain (particularly if you've visited the Church of the Annunciation beforehand) apart from some modern fresco decoration depicting Joseph with Jesus and stained-glass windows.

The main reason to visit is to see the underground level, beneath the modern church, where excavation work has brought to light a cistern and series of storage pits, which dates from the early 1st century AD.

4. Hike up to the Salesian Church of Jesus the Adolescent

For views over Nazareth and the surrounding countryside, take the zigzagging path up the Mount of the Start to the Salesian Church of Jesus the Adolescent.

The church was built in 1918 in neo-Gothic style by French architect Lucia Gauthier. The site is traditionally thought to be where Jesus lived during his youth.

Originally the surrounding buildings in the grounds functioned as an orphanage run by Nazareth's Catholic Salesian order. Today, the religious order uses them as a vocational school.

There are regular classical music performances held within the church in the evenings, so it's well worth checking out if anything is on while you're in town.

Snuggled away in Nazareth's market district is the Synagogue Church, which belongs to the Greek Catholic Melkite community.

To the left of the doorway is a door leading down into the synagogue, which Jesus is said to have attended as an adolescent.

Despite this traditional belief, archaeological evidence points to the synagogue probably dating from the 6th century AD, at the earliest.

The church itself was built in 1887 and has a rather grand dome, sided by two bell towers.

It was built over the village spring, where in Greek Orthodox tradition, the Archangel Gabriel first appeared to Mary. In the crypt below the church, the spring still flows.

The upper church itself has some superb frescoes that are well worth visiting.

If you want to visit the other contender for the title of Mary's well, head south across Church Square to the aptly-named Mary's Well Square, which followers of the Eastern Orthodox Church believe to be the true site.

This Roman-era bathhouse, near Mary's Well, was discovered during renovations of the souvenir shop that sits on the site.

The shop owners have since partially excavated the site and run informative tours of the site for visitors.

The bathhouse tour takes in the caldarium (steam room), the furnace that once heated the baths, and the hypocaust heating tunnels. There's also plenty of information on the excavation works that have been carried out by the owners so far.

The bathhouse remnants date from the 1st century AD, so it is billed as "Jesus' Bathhouse." Although obviously, there is no evidence to support that assertion, it's still an excellent example of a typical bathhouse from that era.

The domed Franciscan Mensa Christi (Table of Christ) Church in the town center has a rather plain interior but contains a slab of stone 3.6 meters long and three meters wide that the risen Christ is believed to have eaten at with his disciples.

The current church, built over the site of an older church, dates to 1861 and has undergone extensive renovations in recent years.

The church is usually kept locked, but the guardian is normally around, and you can gain entry by asking for the key.

Cana is one of two sites (the other is in southern Lebanon) that contend for the title of being the place where Jesus performed his first miracle: the changing of water into wine.

Located about eight kilometers northeast of Nazareth, it's an attractive town for a half-day trip from Nazareth, with three churches commemorating the miracle that may – or may not – have occurred here.

In Cana town center is a Franciscan church consecrated in 1883. Local tradition holds that the church is built over the site where the miracle happened.

Visitors can usually see an old jar here that is claimed to be one of the six pots in which the water was changed.

Opposite the Franciscan church is the rather dilapidated Greek Orthodox Church, built in 1556 over the site of an earlier mosque. Here, too, you'll be shown two stone jars, which are said to have been involved in the miracle (though they are probably no more than 300 years old).

At the north end of Cana is the Nathanael Chapel, which also belongs to the Franciscans.

It was built at the end of the 19th century in honor of Nathanael of Cana, who was initially prejudiced against Jesus ("Can there any good thing come out of Nazareth?") but then worshipped him as the Son of God (John 1,46-49) and was also present when the risen Christ appeared to the disciples at the Sea of Tiberias (John 21,2).

The remains of ancient Zippori (Sepphoris) are an excellent day trip from Nazareth, about seven kilometers away.

Excavations here by American archaeologists have brought to light findings from the Roman period, when the town was known as Diocaesarea, through to the era of the Crusades.

The Crusaders built a castle and church dedicated to St. Anne (mother of the Virgin Mary) here, and the Crusading army assembled at Zippori on July 2, 1187 before their march to Hittim, where they suffered an annihilating defeat at the hands of Saladin.

Walking through the site, you get a real feel for the layers of settlement here, with the Byzantine church, a Roman theater, and the remains of the Crusader castle the top attractions.

To the west are the dilapidated remnants of the old water conduit and the large cisterns known as the "Caverns of Hell." If you walk up to the Ottoman-era fort on the hill, you'll get fine panoramic views across the entire site.

Excavations from 1955 onwards show that the hill on which the Church of the Annunciation and St. Joseph's Church stand was inhabited from the time of the patriarchs (2nd millennium BC).

The little houses of the village were built on top of tombs of the 2nd millennium and underground chambers hewn from the local tufa that had been used in the first half of the 1st millennium BC as store-rooms.

The name of Nazareth first appears in the New Testament in the account of the Annunciation (Luke 1,26-33), and Jesus is said to have lived here until after his baptism by John (Luke 3,21).

In the early Christian period, the Grotto of the Annunciation became a much venerated place of pilgrimage, and the present church is the fifth built on the site.

An early place of Christian settlement, Nazareth was taken in AD 614 by the Persians, who in conjunction with the Jews, destroyed it. Thereafter the Christian population declined.

In AD 629, however, Nazareth was recovered by the Byzantines, who took their revenge by destroying the houses of the Jewish population. The place was not rebuilt until the time of Tancred, the Norman Crusader who took Nazareth in 1099 and ruled as Prince of Galilee.

Nazareth suffered further destruction in 1263 at the hands of Baibars and his Mamelukes. Thereafter, no Christians were allowed to live in the town until the Druze ruler Fakhr ed-Din revoked the ban in 1620.

The town developed in the 19th and 20th centuries under Ottoman, and later, British rule. In 1948, Nazareth became part of Israel, and the new Jewish settlement of Nazareth Illit (Upper Nazareth), with its own administration, grew up on the hills above the town. 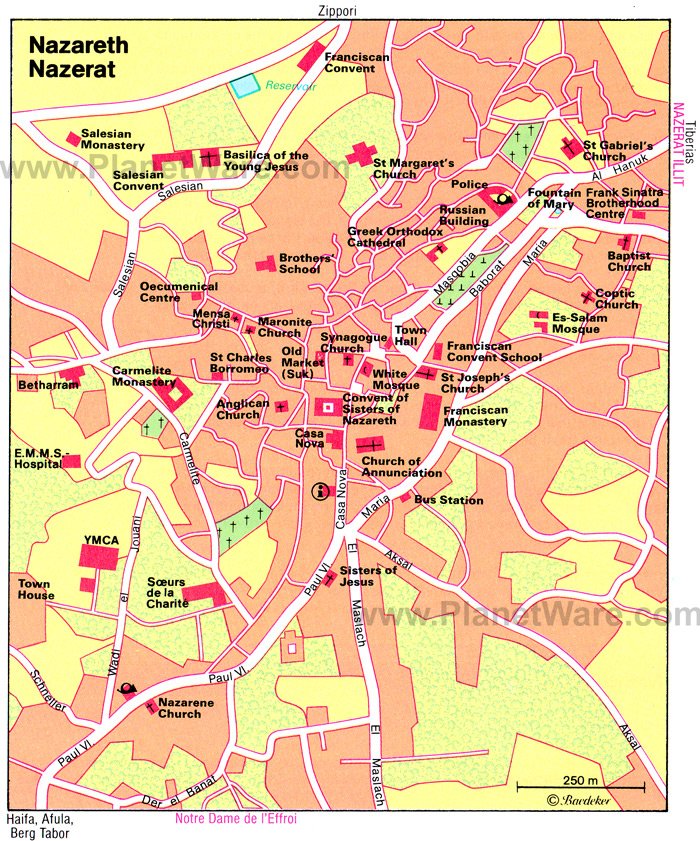 22 Most Beautiful Islands in the World
BE INSPIRED!
MORE PICTURES OF ISRAEL
Destinations
popular right now
> 12 Top-Rated Tourist Attractions in Israel and the Palestinian Territories