For history fans, Akko is one of the best places to visit in the country thanks to the preservation of its stone architecture. There are plentiful historic tourist attractions and things to do amid its squiggle of narrow alleyways with khans (caravanserais), fortifications, and Crusader-era monuments to explore.

Plan your visit with our list of the top-rated tourist attractions in Akko.

See also: Where to Stay in Acre

Akko's incredible surviving walls, which wrap around the old city, are the town's most distinctive feature. For panoramic skyline views across Akko, walking along these ancient defensive barriers can't be beaten.

The fortifications were given their present form by Ahmed el-Jazzar in the 18th century.

From Weizmann Street, you can climb up onto the ramparts and walk to the northeast corner, dominated by the massive tower known as the Burj el-Kummander. It stands on the foundations of the "Accursed Tower," from which Richard the Lionheart hauled down the Duke of Austria's banner in 1191.

A little further south from here, sited in the walls, is the Treasures in the Wall Museum, which has an ethnographic collection of artifacts from early Zionist settlers in the area.

If you head back east along the wall, towards the sea, you come to the Burg Kurajim (Tower of the Vine). This Ottoman bulwark, built to defend the town against sea attacks, is built on foundations dating from the Crusader period.

Occupying the site of the Crusader cathedral, the Ahmed Al-Jazzar Mosque was built in 1781 on the model of an Ottoman domed mosque.

The courtyard is entered by a flight of steps, on the right of which is a small Rococo-style kiosk.

Surrounding the arcaded courtyard are rooms, which once provided accommodation for pilgrims and Islamic scholars. On the east side of the arcaded gallery, steps lead down to a cistern dating from the Crusader era, which provided a water supply for Akko's population when the town was under siege.

A small, plain domed building to the right of the prayer hall entrance contains the mausoleum of Ahmed Al-Jazzar, who died in 1804, and of his successor, Suleiman Pasha.

The mosque itself, with its tall slender minaret, is a fine example of Turkish Rococo architecture, with a mammoth interior decorated in ornate blue, brown, and white.

The grand bulk of Ahmed Al-Jazzar's 18th-century citadel sits just inside the old city walls and is one of Akko's major points of interest.

The current Ottoman-era building is sited atop an earlier citadel structure that was built by the Crusaders.

During the British Mandate period, the citadel building was used as a prison by the British and today, houses the Museum of Underground Prisoners.

This museum commemorates the Jewish fighters who were imprisoned or executed here by the British authorities during the Mandate era, with a collection of black and white photographs and original documents from that time.

Underneath Ahmed Al-Jazzar's citadel is the highlight of a citadel visit. The Crusader City historic site comprises a fascinating series of gothic vaulted halls, which were once headquarters for the Knights Hospitaller.

There are six connected vaulted halls, as well as a dungeon to explore, with the Knights Hall and Dining Hall the best examples of the grand, soaring Gothic architecture of the medieval Crusader period.

The non-claustrophobic can navigate their way through a narrow subterranean tunnel to the crypt after they've finished visiting the halls.

The Khan al-Umdan (Khan of the Columns) gained its name because of the granite and porphyry columns that Ahmed el-Jazzar brought from Caesarea to build this khan.

Built on the site of the Crusader's Dominican monastery, the khan provided traveling merchants with accommodation while trading in the city.

Over the north entrance is the clock tower commemorating Sultan Abdul Hamid's jubilee in 1906.

If you're not claustrophobic, this eerie Crusader Tunnel is one of Akko's most intriguing tourist attractions.

It was discovered in 1994 by a local plumber. The subterranean passage would have originally connected the harbor with a Templar palace, providing a secret escape route to the sea in case of attack.

Today, it runs from HaHagana Street to the Khan al-Umdan and provides a fascinating glimpse into Crusader architecture.

A walk through here is highly recommended if you're at all interested in the medieval Crusader history of this town.

By far Akko's most picturesque church, St. John's Church was built in 1737 and occupies the site of an earlier 12th-century Crusader church dedicated to St. Andrew.

The church's interior is rather plain, and the main reason most people visit is to photograph the façade.

The juxtaposition of the church's crisp white walls and bright red bell tower surrounded by the crumbling stone walls of Akko's seafront makes this one of Akko's prettiest scenes for photographers. Come here in the late afternoon to capture the softest light.

Now home to colorful local fishing boats and yachts, Akko harbor was a busy and important port from the classical age right until the medieval period.

During the Crusader era, it could sometimes be occupied by as many as eighty ships. The original port has now silted up, and all that is left is this small, tranquil fishing harbor.

From here, you can hop on a tourist boat to head out onto the Mediterranean and get excellent views of Akko Old City from the sea.

This old hammam (Turkish Bath) has been fully restored and is now home to an interesting museum with exhibits on the history and culture of the Turkish bath experience.

This hammam dates from the 18th century and is an excellent example of Ottoman-era bathhouse architecture and interior design. It was a working Turkish bath right up until the 1940s.

Visitors are walked through hammam history and traditional hammam practices with the aid of dioramas throughout the rooms, and an audio guide. The entire bathing process is explained along with the important place of hammam culture in day-to-day life.

Akko's main souk (market place) is right in the center of the Old City and is a fun and vibrant bazaar full of fresh produce, cheap eats, buckets of spices, and souvenirs.

If you're looking for an original gift to bring home, it's a great place to browse for textiles and bric-a-brac, though you'll have to get your haggling hat on if you want a good price from the vendors.

If you're not shopping, strolling through this area is worthwhile simply to experience the bustle of local shoppers and take in the smells and sights of a traditional souk district.

For some time out from historic sightseeing, take a trip to the beautiful gardens of Bahji, which contain the shrine of Bahá'u'lláh, founder of the Baha'i faith.

He was exiled to Akko in 1868 and spent the last years of his life in the red-roofed house in the gardens.

This is the sister site to the more famous Baha'i Gardens of Haifa. Although much smaller and more modest, Akko's garden is similarly immaculately manicured. It's also much less visited than Haifa's gardens, so it's very peaceful.

If you want to see the shrine, you have to join one of the organized tours that run in the mornings between 9am and noon. Otherwise, travelers are free to wander through sections of the gardens independently.

The kibbutz of Lohamei HaGetaot was founded in 1949 by Polish and Lithuanian Jews who had spent WWII fighting the Nazis.

It is home to a moving museum dedicated to the Jewish resistance and the Holocaust. On the ground floor are displays illustrating the history of Vilnius, the "Jerusalem of Lithuania," and the town's Jewish community from 1551 to 1940.

There is material on the early days of the socialist and Zionist movement at the end of the 19th century, and objects illustrating the everyday life of Polish Jews as well as an exhibit of some 2,000 drawings and paintings by concentration camp prisoners, including portraits of inmates.

Where to Stay in Acre for Sightseeing

We recommend these convenient hotels in Acre near top attractions like the Old City and the beach:

The history of Akko goes back to the Canaanite period. It was originally situated on Tell el-Fukhtar (two kilometers east, near the stadium), on which excavations were carried out from 1973 onwards by an international team of archaeologists.

Under Hellenistic and Persian occupation levels, remains of a Canaanite settlement were revealed, which the most recent findings suggest may have been occupied as early as 3,000 BC.

The town was conquered by Pharaohs Tuthmosis III and Ramses II, who recognized the strategic importance of its site.

From 532 BC to the Greek conquest in 332 BC, Akko was Persian. In 219 BC, it passed into the hands of the Seleucids, rulers of Syria, but was able to maintain its independence as a city-state.

Herod the Great received Octavian, the future Emperor Augustus, here and later built a gymnasium in the town. In AD 67, Vespasian used Akko, along with Caesarea, as a base for his campaign in Palestine.

The town also prospered in Byzantine times, and from the 7th century under the Umayyads, when it was the port for the Umayyad capital of Damascus.

The Crusaders were unable to take the town until 1104, five years after their conquest of Jerusalem. They renamed it St. Jean d'Acre, and it became the headquarters of the Knights of St. John.

The Italian cities of Genoa, Pisa, and Venice established trading posts in the town, and it developed into a busy and flourishing port town. In 1187, the Crusaders were compelled to surrender the town to Saladin, but it was recovered in 1191 by Richard Coeur de Lion.

After the loss of Jerusalem in 1187, Acre became capital of the Crusader kingdom, with a population estimated at 50,000.

In 1219, St. Francis of Assisi visited the town and established a nunnery. In 1228, the Emperor Frederick II landed here during his Crusade, as did Louis IX of France in 1250, after his unsuccessful campaign against Damietta. Soon afterwards, there was a bitter conflict, almost amounting to civil war, between the two religious orders, the Knights Hospitallers of St. John and the Templars.

In 1290, the Crusaders slaughtered large numbers of Muslims. When the Mameluke Sultan El-Ashraf Khalil captured the town in the following year, he took his revenge, and the Crusader kingdom came to a bloody end after an existence of just under 200 years.

After the destruction of the town, it remained uninhabited for more than 200 years, until its rebuilding by the Druze emir Fakhr ed-Din in the 17th century.

Around 1750, it was enlarged by Daher el-Amr, and this process was continued by his murderer and successor Ahmed el-Jazzar (the "Butcher"), a native of Bosnia, who ruled as Pasha from 1775 to 1805. In 1799, with British help, he withstood a siege of the town by Napoleon.

From 1833 to 1840, Akko was held by Ibrahim Pasha, who defeated the Turks in Palestine with his Egyptian forces but was compelled by the European powers to withdraw.

In the latter part of the 19th century, Akko lost its importance as a port to Beirut and then Haifa. When British forces captured the town from the Turks in 1918, it had a population of 8,000, most of them Arabs.

In 1920 and again during the Second World War, the British authorities used the Citadel as a prison for Jewish underground fighters. The town was occupied by Israeli troops on May 17th, 1948. 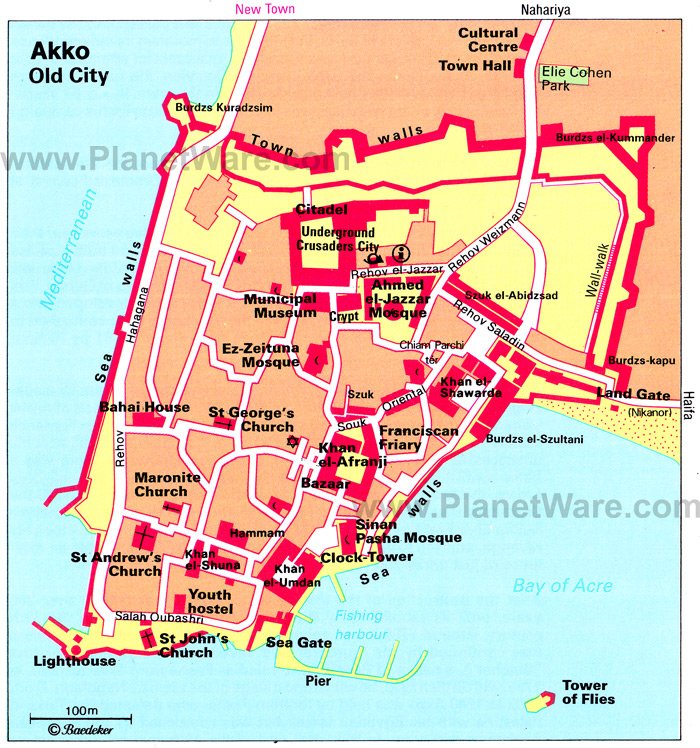