Mount Tabor is a place of deep religious significance for Christian visitors, as it was here that the Transfiguration of Jesus took place. Pilgrims have traveled here since the Byzantine Era.

Today, the church complex on the summit, built upon the foundations of an earlier Byzantine church, is the mountain's major tourist attraction.

For non-religious travelers, though, the summit is worth a visit for the views alone, which sweep across the Jezreel Plain below. Come in spring to see the countryside at its most beautiful, with thick swaths of wildflowers.

Most people arrive at the summit by car, but Mount Tabor is also one of the best places to visit in the area for hikers. The trail up the mountain to the summit offers more views and an opportunity to savor the tranquility of the forested slopes before joining the crowds of visitors at the church complex.

Mount Tabor's various Christian sites are top of most people's things to do list while exploring this area.

On the summit, the road to the right leads to the area occupied by the Franciscan Monastery and enters a walled courtyard between the ruins of an older church on the left and the monastery garden on the right, up to the Church of the Transfiguration (or Tabor Church), which is the major attraction.

Built of light-colored limestone, the Church of the Transfiguration harks back to the style of church building, which developed in Syria between the 4th and 6th centuries.

This architecture was no longer concerned only with the decoration and furnishing of the interior, but for the first time sought to give the exterior a monumental stamp.

This Syrian tradition is reflected, for example, in the facade, with its two projecting towers between which a round-headed arch surmounted by a pediment frames the entrance to the church, and in the volute-like framing of the windows.

In the interior – again on the Syrian model – the nave is separated from the aisles by wide-spanned arches. The roof beams are borne on short columns in the clerestory.

The church contains three grottoes, which were described by Jonas Korte in 1751 as "three chapels, with a small altar; they are called tabernacles, and they are said to represent the three huts that Peter desired to build, one for his Master, the other two for Moses and Elias."

The Grotto of Christ is in the eastern part of the church. Steps lead down to a lower level with a sanctuary enclosed by walls belonging to a Crusader church and roofed with a modern barrel vault.

In the vaulting of the apse in the upper part of the church is a mosaic on a gold ground representing the Transfiguration from the Bible.

There are two other chapels in the towers on the west front: in the south tower, the Chapel of St. Elias, in the north tower, the Chapel of Moses, with a mosaic pavement incorporating crosses in the design. This means that the mosaic must date from before 422, when the Emperor Theodosius II prohibited the representation of crosses in mosaic pavements so that this sacred symbol should not be trodden underfoot.

To the north and south of the Church of the Transfiguration are walls and foundations belonging to older buildings.

From the top of the walls are excellent views of the elliptical summit plateau, with its remains of ancient buildings set in luxuriant gardens.

There are also beautiful panoramic views of the surrounding areas – overlooking the hills of Nazareth to the west, the West Bank to the south, the Jordan rift valley to the east, and Galilee to the north.

If you're feeling active, Mount Tabor has two great hiking trails where you can get your fill of fresh air.

The Shvil HaYa'aranim Trail goes around and up the mountain with gorgeous views along the way. This is a great way to turn a visit to the church complex on the summit into a fantastic activity and is well worthwhile if you have the time and energy.

Alternatively, another trail circumnavigates the mountain.

Both trails are well-marked and maintained and are easily taken by beginner hikers with a decent level of fitness.

Tips and Tactics: How to Make the Most of Your Visit to Mount Tabor

Getting to Mount Tabor

In the 2nd millennium BC there was a Canaanite shrine, a "high place," on Mount Tabor, as there was on other hills like Mount Carmel and Mount Hermon.

The god worshipped here was Baal, whose cult spread in the 2nd millennium, as a result of trading links, to the island of Rhodes, where he was worshipped on Mount Atabyrion (1,215 meters) under the name of Zeus Atabyrios. (Atabyrion was also the Greek name for Mount Tabor).

In the time of the Judges (12th century BC) the prophetess Deborah and her general Barak mustered their forces on Mount Tabor before launching the victorious onslaught that annihilated Sisera, the King of Hazor's general, "and all his chariots and all his host" (Judges 4,12-16).

The significance of Mount Tabor in the history of Christianity began in the 4th century, when it became identified with the "high mountain apart" into which Christ went with his disciples Peter, James, and John "and was transfigured before them: and his face did shine as the sun, and his raiment was white as the light. And, behold, there appeared unto them Moses and Elias talking with him" (Matthew 17; Mark 9,2-13; Luke 9,28-36).

Jesus thus appeared to the disciples in his divine form, as the Christ and God's "beloved son."

Together with the Resurrection, the Transfiguration became one of the central themes of the theology and iconography of the Eastern church.

The appearance of the transfigured Christ in a glory of light also had a decisive influence on the mystical thought of Eastern monasticism: a form of mystical practice, still found on the "holy mountain" of Athos, which seeks through ascetic exercises to be blessed with the "uncreated light" of Mount Tabor and thus to achieve a mystical union with God.

The first churches on Mount Tabor were built before 422, and in 553, it became the see of a bishop. From this period dates the large mosaic of the Transfiguration in St. Catherine's Monastery on Sinai.

There was further building on Mount Tabor, both as a place of pilgrimage and as a fortress, during the Crusader period. The fortress withstood an attack by Saladin in 1191, but was destroyed by Baibars in 1263.

In 1631, the Druze emir Fakhr ed-Din granted the summit of the hill to the Franciscans, whose monastery still exists.

In 1911, the Greek Orthodox, to whom the northern part of the summit plateau belonged, built a church dedicated to St. Elias (Elijah). The large Franciscan church (designed by Antonio Barluzzi) was built in 1921-23. 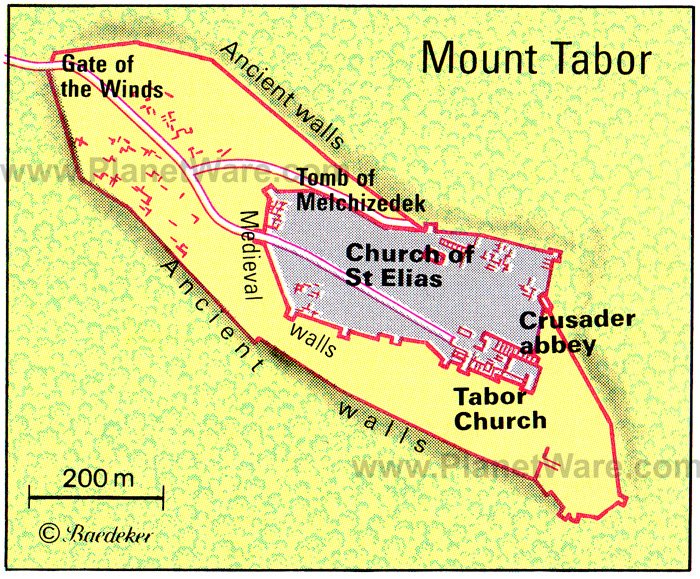