The UNESCO World Heritage site of Masada plays a major role in Jewish history, and a visit here is one of the most fascinating things to do while visiting the Dead Sea region.

It was here that the siege of Masada took place, when the Zealots took their last stand against the Romans and committed suicide rather than allow Rome to take them as prisoners.

The ruins on the lofty mountain summit are one of the top historic tourist attractions in the country. This is also one of the best places to visit if you want to photograph sunrise vistas. The early morning wake-up call is worth it for the panoramas, which stretch across the Dead Sea.

Plan your sightseeing with our list of the top tourist attractions in Masada.

This museum in the Masada visitor center should not be skipped, even if you only have limited time at the site.

The museum provides excellent background information on the site, explaining Masada's place in Jewish history thoroughly, and a visit here before heading to the summit will greatly enhance your understanding of the ruins.

The collection of artifacts displayed inside the museum were all unearthed during Masada's archaeological excavations and allow visitors to imagine daily life inside this stronghold.

An audio guide is included in the admission price.

2. Paths to the Summit

There are three separate ways to reach the summit, which holds all of Masada's ruins.

The Masada cable car is the quickest transport option. From the visitor center, the cable car operates every 10 minutes, zipping up to the summit with bird's-eye views across the escarpment along the way.

For the active, though, there are two main trails to the top to choose from. Both of them are well-marked and well-utilized trails suitable for beginner hikers. If you are going to walk rather than take the cable car, make sure to bring plenty of water and time your visit for the early morning as there is no shade.

The Roman Ramp Trail starts from the western side of the mountain and is the quicker hiking route. This trail is less than one kilometer long and was built by the Romans during the siege of Masada. You will need your own transport to reach the trailhead.

The main hiking path is the Snake Trail. This begins from Masada's visitor center and zigzags up the mountainside for just under three kilometers following the original main trail up to Masada, which dates from around AD 35.

There are expansive views across the surrounding countryside all along the Snake Trail. It takes around one hour to the top for a decently fit walker.

At the northern tip of the plateau is the monumental Herod's Northern Palace, a boldly conceived structure on three levels.

The uppermost part, with Herod's residential apartments, ends in a semicircle from which there is a view of the two lower terraces reached on a modern flight of steps on the west side. On the way down, cisterns for water can be seen in the rock.

On the middle terrace (20 meters lower down), which archaeologists concluded was designed to serve the purposes of leisure and relaxation, are two concentric rings of walls.

Fourteen meters lower down is the square bottom terrace, a peristyle (courtyard surrounded by columns) with fluted Corinthian columns standing on a wall faced with painted plaster.

South of the Northern Palace is a bath house.

A courtyard surrounded on three sides by columns leads into a changing room (apodyterium), which is paved with black and white triangular tiles. Adjoining this is the tepidarium (warm room), also with a tiled floor; the frigidarium (cold bath); and the caldarium (hot bath).

The caldarium, which has preserved its hypocaust (under-floor heating system), is particularly impressive. The small piers of the hypocaust, more than 200 in number, originally supported a mosaic pavement.

From the roof of the baths there is a good view of the whole fortress.

Southwest of the baths is a building, which is believed to have housed Herod's workrooms and offices. It contains a ritual bath (mikveh) constructed by the Zealots between AD 66 and 73.

Against the fortress walls of Masada, excavators found the remains of one of the oldest synagogues in the world and the only one dating from the period of the temple.

The original roof was borne on columns, and in the time of Herod, the building would have been divided into two parts by a wall. The Zealots altered the structure and installed stone benches.

During the archaeological work, a number of scrolls, now held in the Israel Museum in Jerusalem, were found here.

Southeast of the synagogue site is another large complex of buildings with the most important being the partially preserved remains of a church built by Byzantine monks who lived on the plateau during the 5th century.

The church is entered through a porch or vestibule. The apse, at the east end, has a cavity in the floor, which may have housed relics. On the north side of the nave is a (partly preserved) mosaic pavement with representations of plants and fruits.

At the southern end of the plateau is one of the towers of the West Gate (opposite the Roman ramp) and the large Western Palace. Here, you can see how the Zealots altered the building to provide living accommodation and constructed another mikveh to the southeast.

While the Northern Palace was Herod's private residence, the Western Palace, which covers an area of some 4,000 square meters, was his official residence.

The north and west wings contained domestic and administrative offices as well as accommodation for officials and servants. In the south wing, were the king's residential and state apartments.

In one room, apparently an audience chamber, the excavators found a well-preserved mosaic pavement, the oldest ever discovered in Israel and the Palestinian Territories, with geometric designs and plant motifs featuring vine and fig leaves and olive branches. At various points, where the pavement has been destroyed, you can see the guidelines used in laying the mosaic.

Southwest of the Western Palace is a columbarium, a circular structure dating from the time of Herod with numerous niches for ash-urns, presumably to house the remains of non-Jewish members of Herod's garrison.

Going south from the columbarium, you pass two large open cisterns and come to the South Bastion at the southern tip of the plateau.

On the way back along the eastern walls, there is a third mikveh (at the South Gate), another cistern, and houses dating from the Byzantine period (on the left) and from the Zealot occupation (on the right) before returning to the East Gate.

From the eastern walls, there are magnificent views of the Dead Sea and the hills beyond with their ever-changing play of color.

Twice weekly (on Tuesday and Thursday), during the warmer months from March to October, there is a fascinating sound and light show on the history of Masada, with light effects and background music, in the Masada amphitheater (which can be reached only on the road from Arad).

If you are stopping over in the Masada area for the night, rather than on a day trip, this is a worthwhile tourist attraction to plan the timings of your Masada visit around.

The Jewish historian Flavius Josephus ascribes the first fortress erected on the hill to the high priest Jonathan.

Herod enlarged the original small fortress into a stronghold, which combined royal magnificence with great defensive strength, so that Masada became the fortress (metsuda) par excellence.

In the troubled year 40 BC, when the Parthians chose the Hasmonean Antigonus as their leader, Herod brought his family and his betrothed wife Mariamne here for safety.

Again in 31 BC, when Octavian defeated Antony and Cleopatra's fleet in the battle of Actium, and Herod traveled to Rhodes to swear allegiance to the new master of Rome, Herod's family sought the safety of Masada, though this time Mariamne, along with her mother Alexandra, was taken separately to the fortress of Alexandria in Samaria.

Between 37 and 31 BC, Herod had turned Masada into an impregnable fortress.

The summit plateau, covering an area 600 meters long by 200 meters wide, with its palaces, administrative buildings, store-rooms, barracks, and cisterns, was enclosed by a 1300-meter-long casemate wall reinforced by 38 towers, each 10 meters high.

There were twelve cisterns, which together with the supplies of food in the store-rooms would enable the fortress to withstand a long siege.

This situation occurred some decades later, during the Jewish rising against Rome.

In AD 66, even before the rising broke out, a group of Zealots - members of the radical party who had left Jerusalem as a result of internecine conflicts among the Jews - had established themselves on Masada under the leadership of Menachem Ben Judah.

The Romans took the fortress of Herodeion, while the Zealot forces in the stronghold of Machaerus (in present-day Jordan), surrendered in return for a promise of free passage and thereupon reinforced the garrison on Masada, which finally was occupied by a total of 967 men, women, and children.

After the fall of Jerusalem in the year AD 70, the defenders of Masada continued to hold out, and in AD 72, the Romans decided to overcome this last pocket of resistance by a siege.

Their commander, Flavius Silva, enclosed Masada within a circumvallation (siege wall) with a total length of 4,500 meters. Outside this, he built eight camps for the besieging forces; his headquarter camp, rhomboidal in plan, was on the west side.

A great ramp was built up on the west side of the hill so that battering-rams and other siege engines might be deployed against the walls of the fortress. After an eight-month siege, the Romans broke through the walls and set fire to the timber stockade behind them.

Seeing that the situation was hopeless, Eleazar called on his companions in arms, in a speech recorded by Flavius Josephus ("Jewish War," VII,8,6-8), to die rather than be taken prisoner.

They burned all their possessions except the stores of food (there since Herod's time), in order to show the Romans that they had not been starved into surrender. Then, although Jewish law forbade suicide, they chose ten men who were to put the rest of the defenders to the sword and then kill themselves.

When the Romans took the fortress on the following morning they found 960 bodies.

Two women, who had hidden in a water conduit along with five children, told them what had happened. "But when they discovered the great numbers of bodies, they did not rejoice over their defeat of their enemies but admired the noble resolution and the unshakable defiance of death shown by all those involved in the deed" (VII,9,2).

This heroism, irrational though it might be, has made Masada a symbolic place for many Jews. 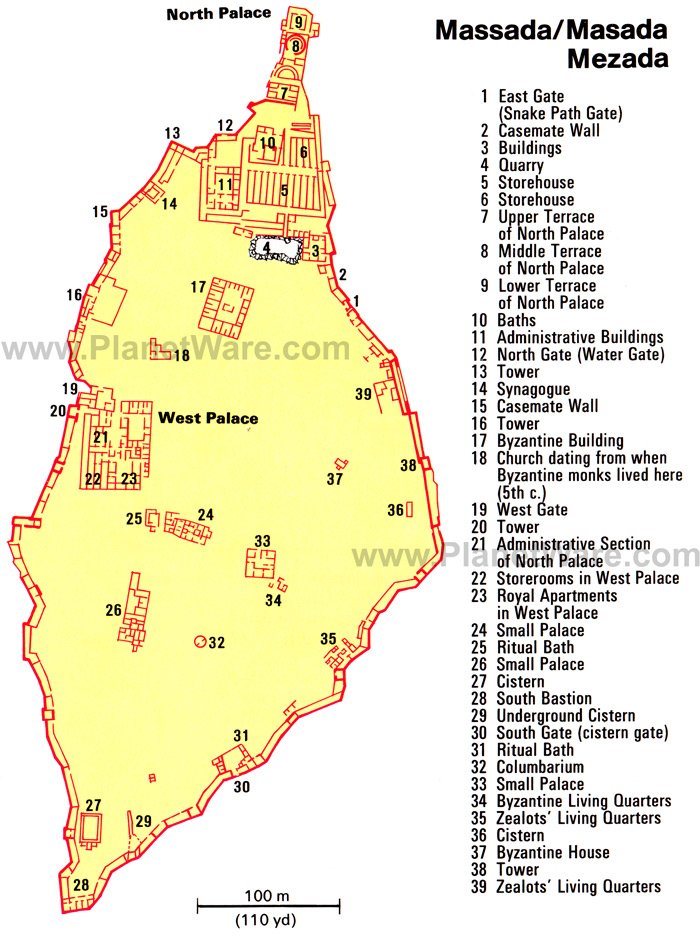